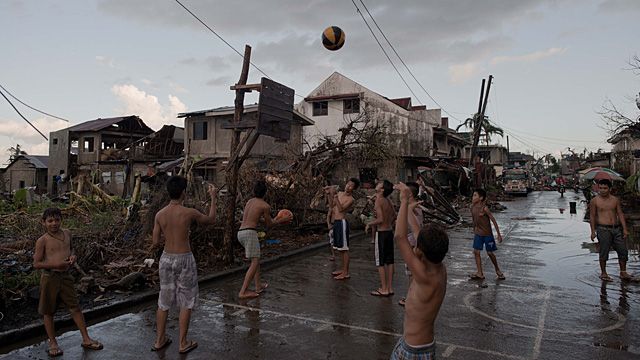 We all know that the Philippines is literally basketball 24/7, but after the events of Super typhoon Haiyan (Yolanda here) people in affected areas have had very little to keep them entertained and happy. One thing is for sure, you can’t keep a good Pinoy away from a basketball, be it in flip-flops or bare feet in the middle of a storm ravaged neighbourhood, we Filipinos will always, and I guarantee always make time for some good old basketball.

This article I found hits the nail on the head and provides pretty good insight on the relationship between Filipinos and basketball.

There’s not much to say here. Almost two weeks ago, Super Typhoon Haiyan — called Yolanda in the Philippines — made landfall, laying waste to coastal areas in Eastern Samar and Leyte provinces and leveling much of Tacloban City, a regional hub where more than 200,000 people lived before the storm. It was one of the most powerful — possibly the strongest — storms to make landfall since weather satellites became capable of measuring hurricane-force winds. Thousands are confirmed dead; thousands more are missing. The images and stories of the storm’s aftermath stretched our imagination — it was the kind of devastation the CGI masters behind science-fiction films strive to imagine, only it was harrowing and gut-wrenching and real.

Yesterday’s images even caught the attention of Warriors forward Harrison Barnes, who devoted a Facebook status to the Philippines that captured the power behind these pictures in such simple and eloquent language that I think it should be the last word in this post:

We all play this game of basketball for different reasons but to see it as a form of healing in a time of need is the greatest reason I’ve seen yet.

A photographer as well as a sneaker enthusiast, Ken strives to perfect his shot, while perfecting his shot. ;)