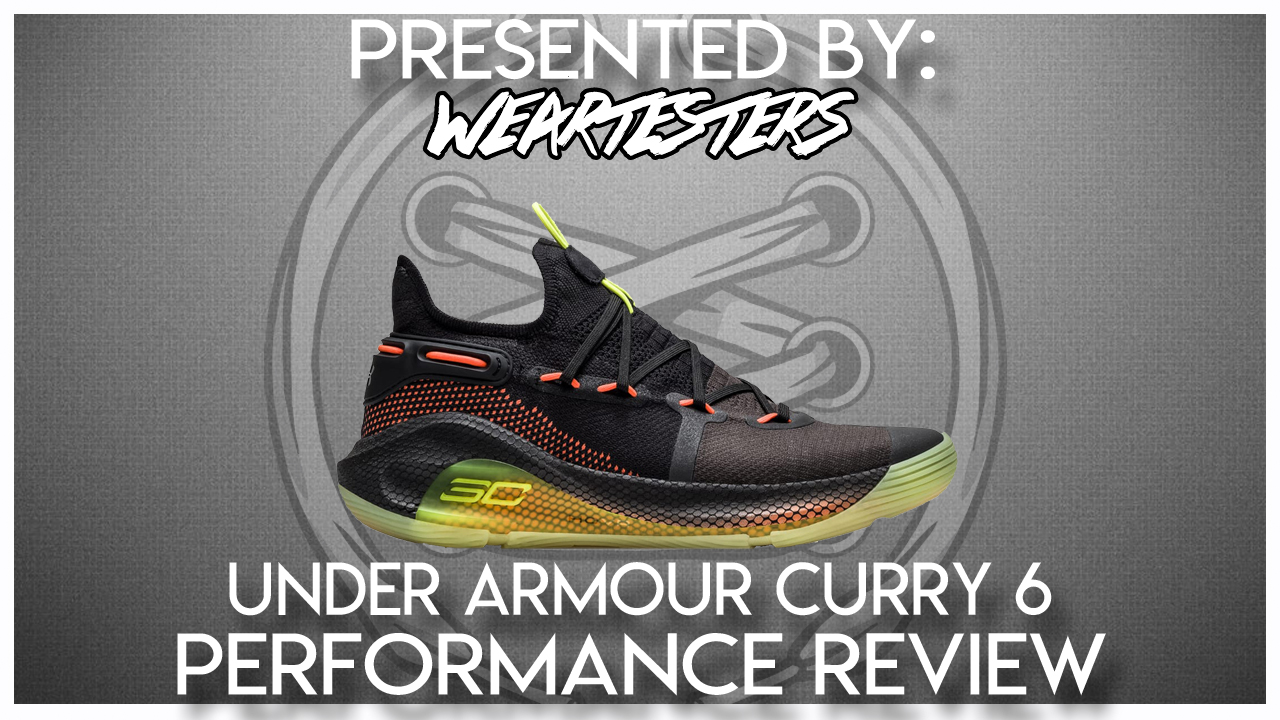 The Under Armour Curry 6 is put through its paces with this performance review by Duke4005.

After waiting over a year for promise of HOVR cushioning to appear in the Curry line, we finally get it in the Curry 6. We all know by now about Curry’s love of court feel – does the Curry 6 keep that low, fast feel or turn into a cushy, mushy mess? Let’s go…

One of the best traction patterns I have tried in the last year. The pattern shouldn’t work – it’s flat, it’s tight, and it’s shallow. There is no herringbone, which ALMOST ALWAYS WORKS!!! So why does the Curry 6 rate so high? I have no idea, but on clean and semi-clean courts, these things stick like Gorilla. Cuts, lateral movements, starts-and-stops, coming off those “Draymond” down screens, my foot went only where I wanted it to. If dust did appear, one extremely quick wipe and I was good-to-go. That was a good thing, because dust will grab onto the outsole, especially the translucent colorway like the Christmas and Fox Theater.

Outdoors? Not. A. Chance. The soft, shallow pattern will get eaten up immediately. Indoors is doing a number on my pair, as some of the pattern is fraying off from hardwood. However, after 7 wears for game nights (roughly 28-35 full-court games), I haven’t experienced any of the peeling issues that some have had — thankfully. The cutouts in the forefoot allow for flexibility and help with transition while running (although it would be better if the foam was segmented for flexibility) but those cutouts could catch on the floor and peel. Again, mine haven’t, and I know a lot of people who haven’t experienced this yet, but it can’t be ignored.

Cushioning in a Curry? Yeah, but it’s not fluffy and puffy – its tuned for optimal impact protection while still keeping you close to the court for those crossover/step-back combo move three’s that you see Steph do and then want to try yourself. Seriously, those of you wanting the HOVR found in the Phantom or even the Sonic runner, keep looking. This foam is dense and tight but warms up the more you play, providing a solid, stable base under foot that never compresses on the edges on cuts and lateral moves. However, there was no impact issues with force coming back up the ankles and knees. The response was NOW – when you decide to move, there is no delay from the foam rebounding. For me, a bigger guard with broken knees and ankles, the Curry 6 never caused me any pain or discomfort. I wouldn’t call this HOVR magical like some of the best cushioning systems, but for quick guards that play fast and tight, it doesn’t get much better.

There’s a full knit upper with elastic areas over the top of the foot and some fuse around the high-wear areas — pretty typical for a basketball shoe today, but it works. The knit is super comfortable and not restrictive or rough at all, which truly feels like a sock on your foot. The toe area is a tighter knit with some additional backing for structure and containment but still — it’s comfy. The lacing system could have been serious — the loops are all connected until it gets to the last hole and the heel counter. If the Curry 6 would have pulled all of the cords, even around the heel with the lacing, the fit would have been killer — but more on that next. The heel interior is deeply padded and again, super-comfy. Notice a trend here? After the minimal uppers and thin padding of the Curry 4 and 5, the 6 brings the comfort strong.

The fit on the Curry 6 confused me. I saw a ton of wearers on Instagram and other sites saying the fit was perfect, but honestly, I had to double-sock to keep from having heel slip and forefoot movement. It wasn’t bad or a deal-breaker, but I don’t like to feel my foot moving inside my shoe at all, and no matter how hard I pulled, the 6 had some empty space around my foot. Again, as simple as double-socking and I was good (I did get some serious lace pressure at the top loop if I pulled way tight like I like). It was really kind of frustrating, because I had the same heel issue in the Curry 5 and the 6 had, it HAD, to be better. I gave it some break-in time for the midsole to begin softening and flexing a little smoother, and I still get slip. I think it’s because the laces pull down and not into the heel, just like the 5.

I would NOT tell anyone to stay away from the Curry 6 based on fit though. The movement was so slight it probably won’t bother a normal person, but I’m far from normal. Again, an extra sock fixed the issue for me. As for length, I had my standard thumb’s-width from the end of my big toe to the end of the toebox but if you like that real 1:1 fit, you could go down a half-size and the materials should stretch enough to stop any pain.

If anyone knows basketball, especially the NBA, then they know Steph Curry NEEDS support. The Curry 6 has sneaky support: it’s a knitted low top, but the sole is wide and the midsole is solid, meaning there is no edge compression that can lead to instability on off-balance landings (and sometimes on normal landings). The flat, wide base makes take-offs on jumpers solid and stable, which leads to better shooting. The midsole is already supportive under the arch from the HOVR but Under Armour went ahead and gave us a midfoot plate called Speedplate for additional torsional support (and I think it works with the HOVR like the FlightPlate/unlocked Zoom Combo in recent Air Jordan shoes).

The other main factor in support and stability is side-to-side containment and the Curry 6 locks it in with a raised midsole. Your foot will sit down in the midsole so any harsh cuts and lateral movements will be stopped on the spot with the raised sidewalls.

Best Curry model ever? I can’t say that; for me, the Curry 2 is still tops (that TRACTION!!!). However, in the last 4 models, the Curry 6 is the best. A great combo of traction, cushioning and support, keeping fast players happy and non-fast players, well, still not fast, but at least they will look good. Again, the cushioning is stiff and fast but absorbs all that bad energy. If you enjoyed the Curry 2 then you need to check out the 6. If you liked the Curry 5 you should check out the Curry 6. If you liked the Curry 3, well…

Another thing — this shoe is plain fun to play in. It’s been a while since a shoe made me feel young, but the Curry 6 did. It takes a special athlete to make the public feel like them just by wearing their shoes, and at my age, I should be past all of that propaganda, but I did. It helps that I have range like Curry (Ayesha), but the fun factor always raises the score a little (new category?).

The Curry 6 is a great indicator of the future and what Under Armour can do — make a good/great performer for a nice price and it actually LOOKS good too (I liked the 4 and 5 as well, but all the internets say the 6 looks great). Much like Curry, Under Armour started out as a long shot, but the Curry 6 shows they are serious about staying around. 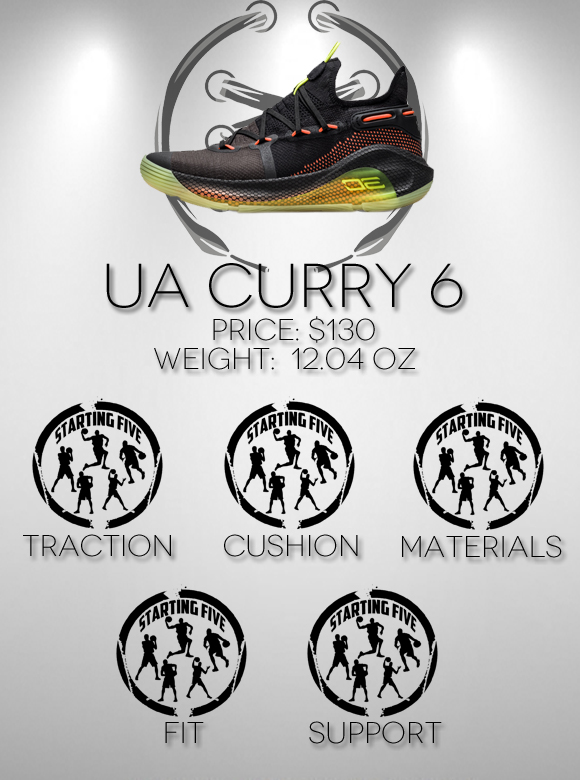