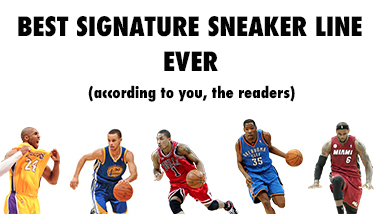 We recently posted a survey asking you, the WearTesters readers, a number of performance basketball questions; namely, which signature athlete has the best performing sneaker line. In just a few days, we received more than 1000 responses (we appreciate that, guys!)

The first question in the survey asked you which sneakers are the best you’ve ever played in. Since many of these sneakers feature a signature name, we’ve decided to compile data of the best performing sneakers with the signature athlete’s name attached. While not technically signature shoes, team/takedown models like the Lebron Soldier line are included in the data.

Athletes with cosigned sneakers from multiple brands like Dwyane Wade, will have his signature shoes from Li-Ning and Jordan Brand separated. Similarly, player exclusive colorways of a non-signature sneaker are excluded, as we saw a few Kyrie Hyperdunk PEs in the answers.

Since we asked you for your top three sneakers, we looked at the both the number one shoes only, as well as data for any sneaker listed. The results were pretty much the same, although we’ll mention the percentages for both factors.

Interestingly enough, only 27% of you felt that a signature athlete wearing a sneaker influenced your buying decision while 26% said it didn’t impact the decision. The remaining 47% said it depends on other factors, presumably feature related.

With all of that said, here are the signature athlete lines that you voted as the best performing sneakers ever. Make sure to check out every page!