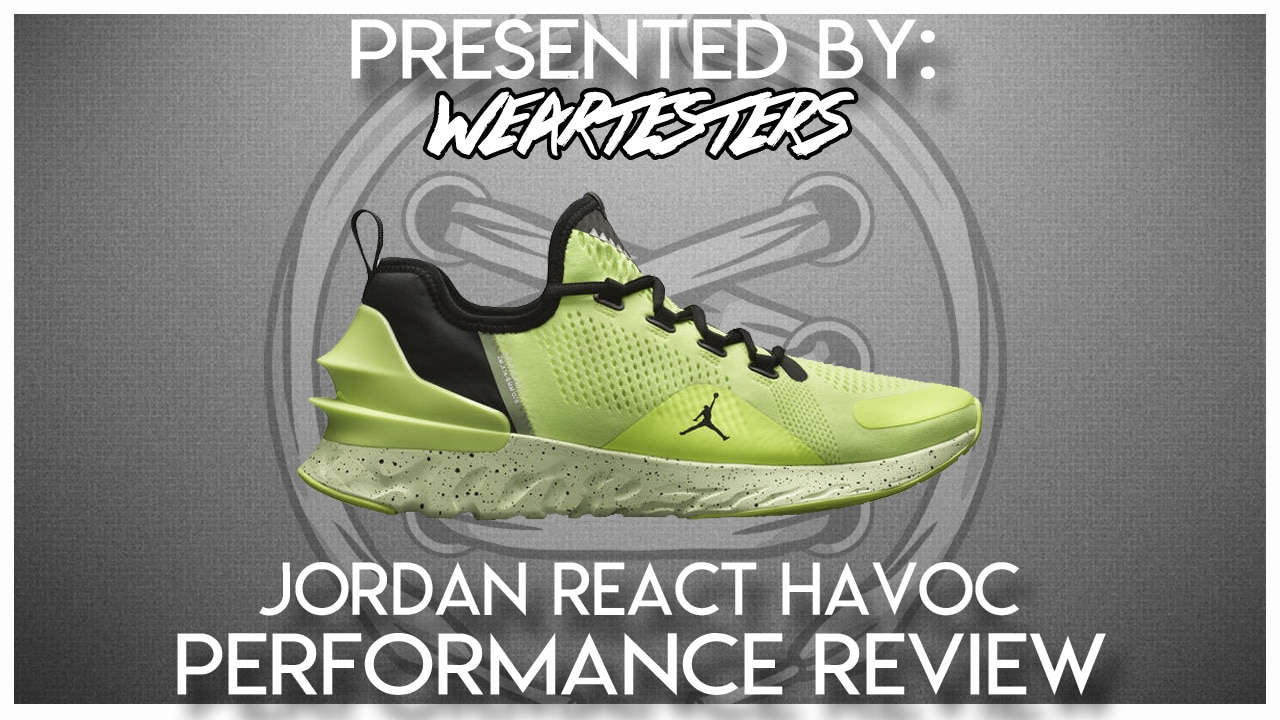 Most Comfortable Basketball Shoe of 2019?

The Jordan React Havoc is a ballsy attempt by Jordan Brand to create a legit runner that satisfies both the basketball or football player doing conditioning drills and long distance runners who want some of that Jordan style. And you know what? They just might have freakin’ done it.

Jordan Brand has done runners or “Trunners” off and on for a while. They did 3 models of the Flight Runner (here are v2 and v3), made runners that looked like Retro 12s, and have even retroed a Trunner(!) the Jordan Trunner LX. To this point, Jordan has never really asserted that one of their shoes could do long runs. The focus has always been on sprints and conditioning drills. And now a shoe that can do both? Yes, please.

I’d like to thank the team at Jordan Brand for providing a test pair. After receiving the Jordan React Havoc, I was able to run 50+ miles in them. I tested them on long runs, track workouts, football route drills, basketball specific defensive slides, and during casual wear. Here’s how it went:

Here’s a hypothetical. Let’s say I build a running shoe with the midsole of an Epic React, throw in a forefoot Zoom Air bag, and then add an Ortholite insole. How does that sound? The Jordan React Havoc did all of that. And it works as well as it sounds. The forefoot feels light and low to the ground but when your foot hits the ground you get maximum impact protection.

The feel is very similar to the Nike Vomero 14 (React + full length Zoom). I also think the Jordan Brand designers made the right decision not to go with full length Zoom. The decision allowed them to shed some weight and assured the React Havoc is at its best when you’re on your toes. It’s a perfect set up for the sprint and conditioning drills Jordan runners must handle and it works great on long runs too. I did several long runs of 9+ miles in the React Havoc and while there were some slight fit issues, the cushioning handled the miles well. The React Havoc’s versatile cushioning set up is one of the best in currently available running shoes.

The lack of rubber on the bottom of the Epic React drove me crazy. I know Nike wanted the React to expand but a real running shoe needs a lot more rubber in order to last 300-500 miles. The Epic React 2 improved by expanding the forefoot rubber but it still wasn’t quite enough. The Jordan React Havoc covers the entire forefoot with rubber and then uses about the same amount of rubber as the Epic React 2 on the heel. The forefoot rubber resembles a fingerprint and does a good job across asphalt, gravel, grass, and tracks. When I did defensive slides or ran routes it really gripped as I pushed off. And while it didn’t bite the track like the Adidas Pulseboost HD, it performed well on the track. I’d use the React Havoc for speedwork any time. Interestingly, after putting 20-ish miles on the shoe, I could begin to see the outline of the Zoom bag pushing against the outsole. I can feel the Zoom bag slightly protruding but nothing like the Jordan XX8 or its successors. The protrusion had no effect on traction or performance.

Let’s start with the monster heel counter. My wife said she thought it looked like something designed to hurt people. It’s not a hard plastic, more a soft pliable plastic, except at the very edge of the ridges it’s fairly rigid. It’s annoying when trying to slip off one shoe with your other socked foot as you can really whack yourself if you’re not careful. It does, however, do a great job in terms of heel stability. If you have a larger than average heel, it may be constricting. For most people, it envelops the heel and keeps you on top of the footbed.

The mesh of the shoe is really tight so unless you’ve got really wide feet you won’t feel much slippage even when quickly changing direction. A well placed piece of Fuse on the lateral side of the midfoot helps prevent lateral rollovers and will help long term as the mesh loosens.

The Jordan React Havoc fits true to size length wise but they’re super tight. Like skater in skinny jeans tight. I have a narrow foot too. It might be the tightest running shoe I’ve ever worn. I would recommend all wide footers try them on to make sure they can stand the squeeze. It’s like wearing compression shorts on your feet. I tied them once and used them as a slip-ons after that. The laces can tighten the midfoot a bit but with the mesh being so tight I doubt anyone will need it.

During my first long run, the React Havoc wasn’t broken in and my forefoot didn’t have enough room to expand. Holy hell was it painful. It felt so good to take the shoes off after that run. Luckily, that run was the turning point in opening up a little more room in the forefoot and feeling more comfortable in the React Havoc on long runs. If I were to do it again, I’d only run 3-5 miles at a time until I hit 25-30 miles in the shoes. I think that would be a much more comfortable break in experience.

The upper is a super tight mesh with fuse overlays at the toe and the lateral side of midfoot. The heel is made of a neoprene-like material that conforms to your achilles and prevents chafing from the big plastic heel counter. There’s also several reflective hits including the heel tab which helps bolster the Jordan React Havoc’s case as a great slip-on runner (move over Phantom React). Overall, nothing premium material wise, but what Jordan Brand used is exactly what you’d expect on a shoe meant to assist athletes in their conditioning routines.

The Jordan React Havoc is a versatile runner that can do long distances and light trails but really shines doing speed work and conditioning. It’s more stylish than a typical runner and people do notice. It would also be a great gift for that high school or college athlete in your life. Since their football or basketball coach is going to run them so hard they puke, at least they’ll look good doing it.