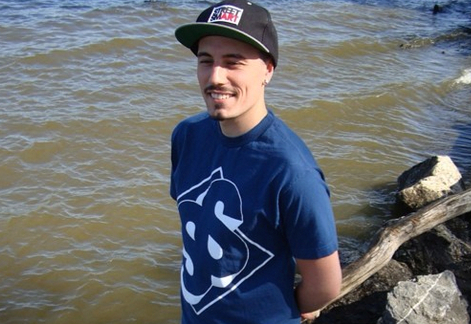 Following Hsuperman_18’s “What Got Me Into Sneakers” post that I really enjoyed, I figured I’d post my own. However, it may be an unpopular piece for those that have sworn their loyalty to “the Swoosh,” so you may want to turn back now… 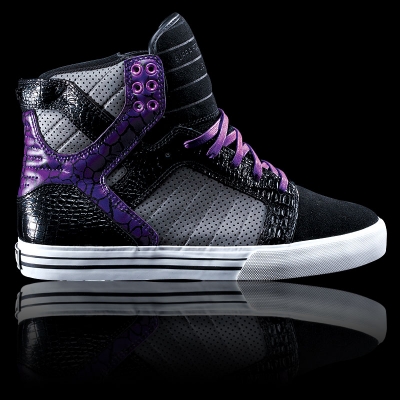 I am Noah Goldowitz, or TheShoeRestorer, and the shoe that got me into sneakers was the 2008 Supra Footwear Skytop I “Purple Croc/Black,” pictured above. Many sneaker people start their stories with basketball. Back then, everybody was rocking Js and Boks that didn’t catch my eye like these skate shoes did. I grew up in Queens, NY, and while I was playing street ball, I was forced to play with very good players in my neighborhood that were all three to four years older than I was. Basketball shoes didn’t seem like they were for me at the time, since basketball didn’t seem like it was for me, so I gravitated elsewhere.

When I first saw the Supra Skytop’s silhouette, with it’s boxy heel and criss-crossing leather panels, I fell in love. The panels and color blocking on this shoe blew my creativity sky-high; I imagined all sorts of colorways that Supra later delivered almost perfectly with what was in my head. I sketched the silhouette all over my notebooks, tests, and folders. 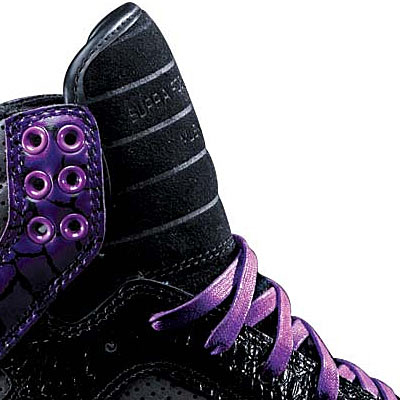 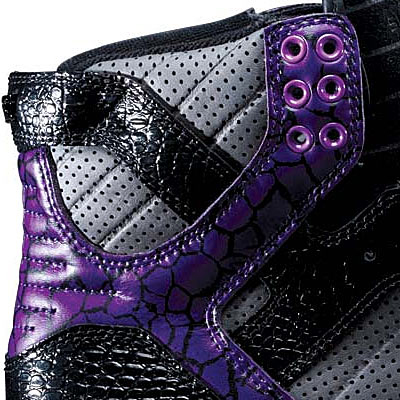 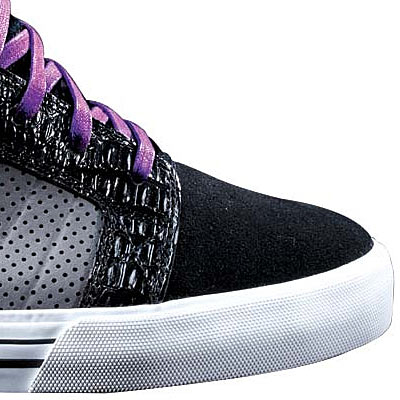 The Supra Skytop I “Purple Croc/Black” was the first shoe I spent real money on. It was over a hundred bucks, and at the time, it was real money! I don’t remember shoes I had before it, probably some DC skate shoes that were thirty bucks. I was thin and rocked tighter clothing because of my body type, so I was rocking joggers before the whole craze came around; after all, joggers are what my parents, and their parents, were rocking for physical activity and sports until sweats with lose, or no cuffs, came around. There were a few hand-me-down pairs, and NONE of the brands that produce joggers now match the quality of those older original joggers, no matter their $150 price tags. You just can’t compete with an article of clothing that has lasted twenty plus years. My French mother lived her young adult life wearing joggers and I followed suit. The Skytop I looked amazing with joggers, still does, and I rocked those Skytops until I had to throw them away; they reeked, were covered in paint from err, “extra curricular activities,” and simply had to go. 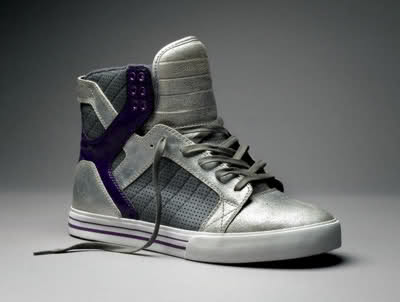 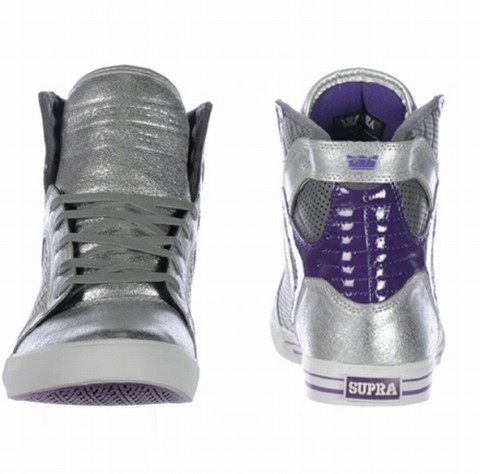 Next, I copped the above pictured, very moon-boot-like, Supra Skytop I “Metallic Purple.” Quality was great and they’ve lasted forever, I still rock them. The next shoe I spent real money on was the shoe that sucked me into sneakers completely… 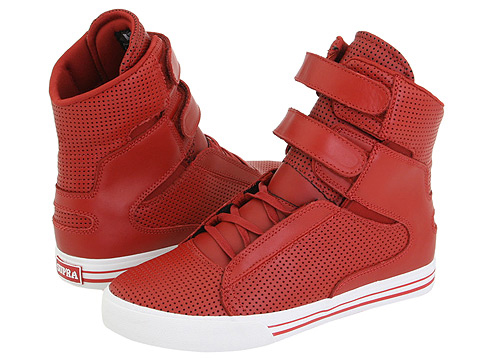 I present the Supra TK Society “Red Perf,” in one of the original launch colorways. It dropped in around May of 2009, if I remember correctly, with campouts abound that rivaled those of the original Yeezy release. The sheer height on this shoe was incredible! The panelling was something to behold, and the straps completely did it for me. The “bird’s eye view” of the Supra Society is basically second to none in my book and pricing was great; they were skate shoes that were built tough with premium materials. The Supra Society was so comfortable and I adored every pair I had/have. I copped the above “Red Perf” colorway from the original launch. Years later, after thoroughly beating up my first pair, I copped another BNIB pair I spotted on eBay. And of course I rocked them with one lime green lace, one black lace, just like my original pair. After that, a force unbeknownst to me snapped my arm open, injected a hypodermic needle into my vein, and in poured sneakers from that moment on. 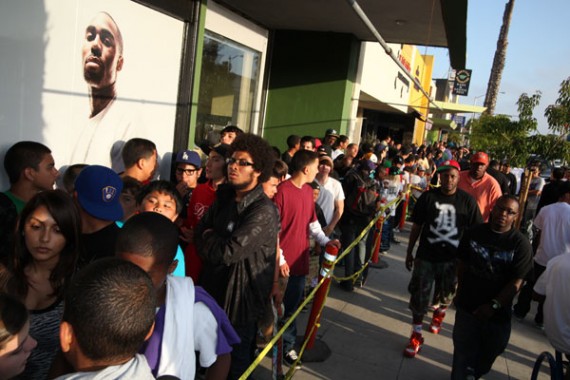 Campouts for the release of the Supra TK Society, via SupraFootwear.com

After that, it was all Supra and Android Homme. Android Homme made some of the highest quality sneakers I have ever encountered, period. I haven’t copped any of their recent stuff, but their 2009-2012 shoes were of a quality that I do not think will ever be rivaled for the price. Their boxes were completely silver with black embossed lettering. They came with all kinds of accoutrements: Dustbag, Android Homme shoehorn, and an embossed card that looked super official. For about a year or so afterwards I was steadily with Android Homme and Supra, but then one day I saw the Reebok Kamikaze II, and my life changed forever. 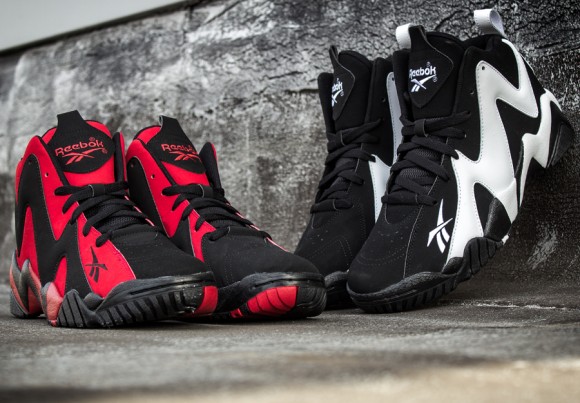 The Reebok Kamikaze II is one of the best looking shoes ever. The Kamikaze I was designed by Ricardo Vestuti but the Kamikaze II was designed by Jon Morris. The II’s zig-zag, made infamous by the Reign Man himself, is absolutely breathtaking to me. Your eye moves all over the shoe when you look at it; up and down the zig-zag, down to the midsole, across the tongue. It amazes me and I enjoy taking in every inch of this shoe. The colorway options are infinite and over the years I have imaged hundreds of colorways I’d love to create. While the Kamikaze II broke open the whole world of sneakers for me, I couldn’t buy them right away. Nor did I really want to. I took my time and collected other shoes, appreciating different models and brands until I could arrive at this shoe. When I finally did, I could savor the moment because I had accumulated the knowledge to truly appreciate the Reebok Kamikaze II. I inhaled that fresh-out-the-box smell, breathed it in deep, and have rocked them as my primary kick ever since. If I were to rock one shoe for the rest of my life, it would undoubtedly be the Reebok Kamikaze II.

Since my Supra and Android Homme days,  I have widely expanded my taste in shoes; I will rock Reeboks ’til death, shout to my @TeamReebok1895 fam, Jordans, Asics, New Balances, etc. I rock anything I love.

Thanks for reading! I’d love to read your “What Got Me Into Sneakers” story in the comments below so start writing, go now! And please excuse my pants below, ah, the follies of youth. 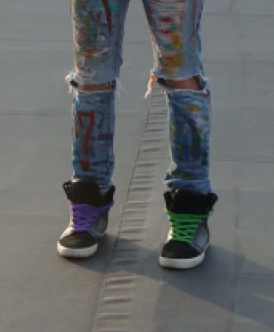 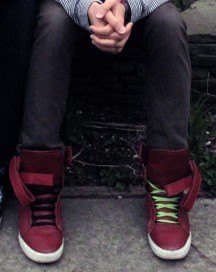