Under Armour (clearly a company I should have bought heaps of stock in two years ago) has reported its first quarter 2016 revenues and things are looking very good. The brand has raised full year net revenues outlook to $5.0 billion, but we’ll see if they hit that target — UA may be setting the bar high this year because it seems to smash projections. Here’s all the information from UA:

Kevin Plank, Chairman and CEO of Under Armour, Inc., stated, “For the past 24 consecutive quarters or six years, we have driven net revenue growth above 20% and we are incredibly proud of our start to 2016 with first quarter net revenue growth of 30%.  The strong results posted this quarter truly demonstrate the balanced growth of our brand across product categories, channels and geographies.  It also showcases our heightened focus on providing better service across our distribution channels, ensuring that our consumer consistently finds the newest, most premium product from us wherever they shop.  In footwear, this includes the remarkable success of the Stephen Curry signature basketball line, as well as the exciting launches of our first smart running shoe and our new line of Jordan Spieth inspired golf shoes.  Combined with the introductions of premium apparel technologies like Microthread and CoolSwitch, we will continue to drive elevated innovation and excitement to the athlete throughout the remainder of 2016.”

Mr. Plank concluded, “This year marks our 20th year in business, which is a great milestone for our company.  Our robust growth this quarter demonstrates the power of our brand with growth coming from every part of our business.  Our ability to adapt in a rapidly changing environment has been a critical part of our success and fuels our inspiration to create game-changing products that solve problems and enrich consumers’ lives.  With this unrelenting consumer focus and ongoing investment, we are setting the foundation for our growth story over the next 20 years.”

Non-GAAP Financial Information
The Company reports its financial results in accordance with accounting principles generally accepted in the United States (“GAAP”).  However, this press release refers to certain “currency neutral” financial information, which is a non-GAAP financial measure.  The Company provides a reconciliation of this non-GAAP measure to the most directly comparable financial measure calculated in accordance with GAAP.  See the end of this press release for this reconciliation.

Currency neutral financial information is calculated to exclude foreign exchange impact.  Management believes this information is useful to investors to facilitate a comparison of the Company’s results of operations period-over-period.  This non-GAAP financial measure should not be considered in isolation and should be viewed in addition to, and not as an alternative for, the Company’s reported results prepared in accordance with GAAP.  In addition, the Company’s non-GAAP financial information may not be comparable to similarly titled measures reported by other companies.

About Under Armour, Inc.
Under Armour (NYSE: UA, UA.C), the originator of performance footwear, apparel and equipment, revolutionized how athletes across the world dress.  Designed to make all athletes better, the brand’s innovative products are sold worldwide to athletes at all levels.  The Under Armour Connected Fitness™ platform powers the world’s largest digital health and fitness community through a suite of applications:  UA Record, MapMyFitness, Endomondo and MyFitnessPal.  The Under Armour global headquarters is in Baltimore, Maryland.  For further information, please visit the Company’s website at www.uabiz.com. 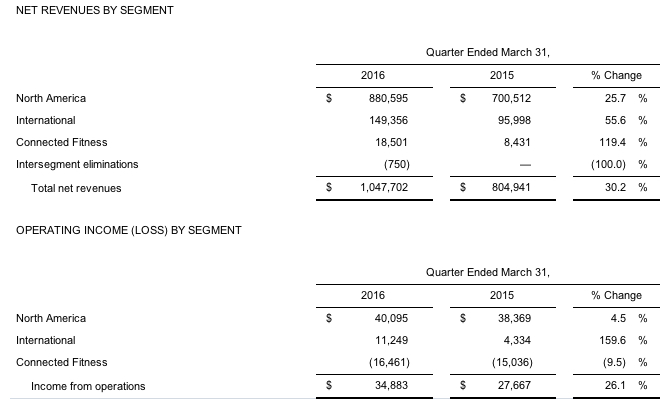 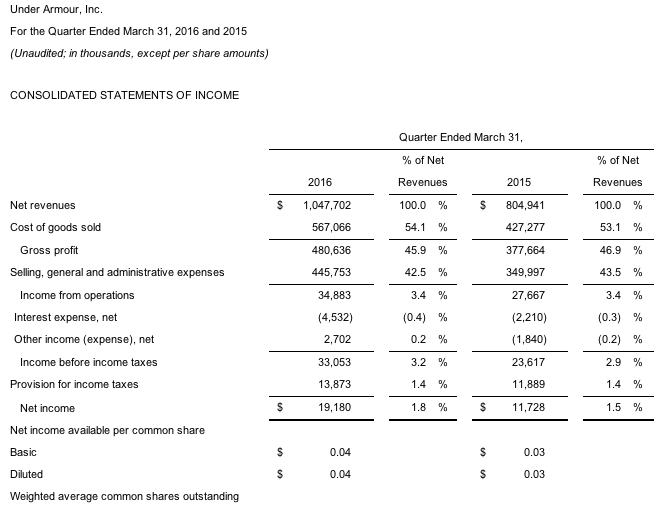