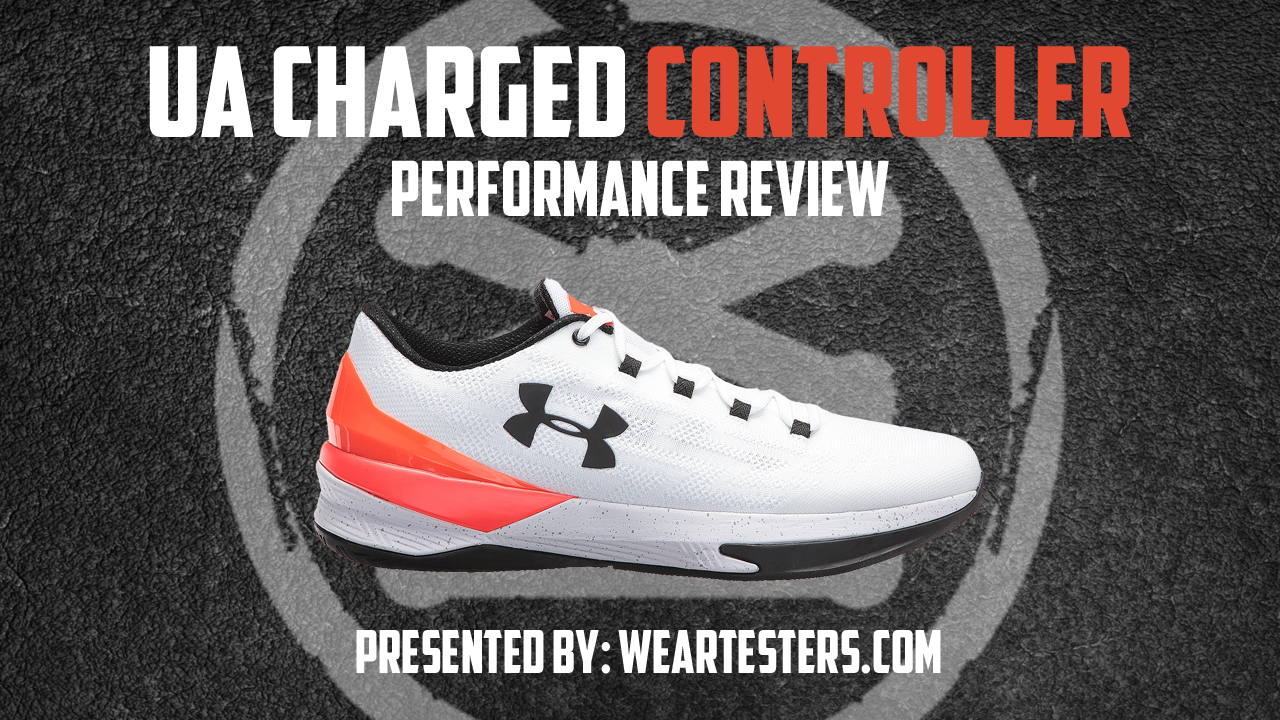 The Charged Controller from Under Armour introduces us to the brand’s version of a fully knitted upper and brings back the MicroG + Charged foam cushioning that was found in the ClutchFit Drive 3. At only $100, the Charged Controller looks like it has a lot of value, but how does it perform? Only one way to find out…

Traction: Under Armour has a problem on its hands. It all started with the Curry One Low. The Curry One High had a decent traction setup but when UA dropped the low version, the rubber compound seemed tackier and more responsive than its hightop counterpart. Then the Curry 3 came along. Those who played in the ‘SC30 Camo’ colorway (the black and yellow one) considered the traction to be the best of the entire Steph Curry signature line. However, those who played in anything else found the traction disappointing, with some calling it “unusable”.

Fast forward to the UA Charged Controller, which uses the same traction setup as the ClutchFit Drive 3. In that review, the traction completely surprised me with how tacky and responsive it was, even on dusty floors. So going into the Charged Controller’s testing phase, I was expecting a similar experience. What I got instead was a setup that needed a lot of time to break in, and even when it did, it wasn’t as impressive as what the ClutchFit Drive 3 used.

On clean floors the traction is going to be just as good as anything else but coming across a perfectly clean floor these days is about as tough as winning back-to-back MVP’s with one of them being unanimous (OK, maybe not that hard). The Charged Controller’s outsole is going to find dust, and when it does, wiping is going to become an absolute necessity. Once the outsole breaks in, in about seven to ten hours, the traction does improve even on those less than ideal floors. However, as I mentioned earlier, despite using the same exact pattern as the CFD 3, it isn’t as impressive on the Charged Controller.

Why is that? We’re not sure but the only thing we can come up with is that Under Armour may be using different rubber compounds on different colorways and depending on what colorway you end up purchasing, your experience may vary. My CFD 3s had a white outsole and they performed great, but my Charged Controllers have a black outsole and they didn’t perform as well. Same traction, same pattern, different experience. What’s the deal with that?

Cushion: This is another category in which the Charged Controller uses the exact same setup as the ClutchFit Drive 3. Unlike the traction, the cushion setup used here provides the same great experience that was showcased in the CFD 3. The full-length Micro G midsole carriage provides the perfect balance between plush comfort and firm responsiveness. When you’re just standing around the Micro G foam is going to feel very comfortable underfoot, and once you start moving around and working your foot into the foam, the Micro G is going to firm up and provide great responsiveness and court feel without sacrificing impact protection. There is a Charged foam crash pad placed underneath the heel, which mainly goes unnoticed unless you land on this area a lot. But the real star of the cushion system is the full-length Micro G footbed that is still the most versatile cushion setup on the market today, in my opinion.

Materials: Unless you count the Threadborne that was used on the Curry 3, this is the first time Under Armour has used a fully knitted upper on an on-court model and its a pretty good first attempt — but there are definitely some improvements that can be made. If you were to feel the toebox area blindfolded straight out of the box, you wouldn’t know that you were feeling a “woven” upper since it’s pretty stiff before a standard break in period. Afterwards, things do soften up a little bit, but it’s still nowhere as comfortable as other woven uppers on the market today. The thick fuse overlay in the toe rand area does wonders from a durability point of view, but until you fully break in the Charged Controller you may experience some pain in this area during hard cuts and stops since the fit is less than ideal towards the front of the shoe (more on this later).

As for the rest of the materials, Under Armour did a pretty decent job and strategically threaded and coated certain areas with plastic to improve durability and maintain structural integrity without sacrificing too much support. Is it more comfortable than Primeknit? Hell no. Is it better than heavily glued Flyknit? Yes. Could Under Armour have made the toebox area a little more comfortable? Absolutely. Had it done so, the materials on the Charged Controller would have been taken to a whole other level, but for only $100, the materials are a pretty good bargain that any hooper should be happy with

Fit: The fit toward the front of the Charged Controller is a bit roomy, something you wouldn’t expect from a silhouette that utilizes a fully knitted upper. Since Under Armour coated and threaded the tightly woven areas of the upper with plastic, the toebox does not snap to your foot for a nice one-to-one fit and instead leaves a lot of dead space that could be eliminated by going down half a size. However, if you’re a wide footer, going down half a size means the midfoot area could become too tight. If you don’t have a wide foot I would highly recommend going down half a size to eliminate any dead space in the toebox area; if you do decide to go true to size the lockdown and support in the Charged Controller is good enough to keep your foot from sliding within the shoe. I only had a problem with the fit when my toes would slam into the floor on a freak play, and even then, it only happened once — but boy did it hurt.

Support: When it comes to support, you shouldn’t expect much from a low-top sneaker that has a knitted upper. The Charged Controller is no exception to that rule but that doesn’t mean the support is lacking, it’s just minimal. Most of your support will be coming from the wide base in the forefoot and the excellent traction setup but other features such as the “Bear Trap” lacing system (which is both dynamic and fantastic), as well as an external heel cup, ensure that your foot stays locked in despite the roomy fit. The tightly woven sections in the upper also add some structural integrity that normally wouldn’t be there for a knitted upper, but the effect of these areas are minimal at best.

Overall: The UA Charged Controller was my most anticipated on-court model of 2017. The prospect of having a fully knitted upper with the amazing cushion and traction that the ClutchFit Drive 3 showcased had me drooling with very high expectations that quite frankly were never going to be fulfilled. Had the traction been more consistent with what the ClutchFit Drive 3 provided and had the fit in the toebox been closer to my foot, the UA Charged Controller would have been a lot closer to living up to my hype. Even with those two categories slightly under performing, going down half a size can easily fix the fit issues and the cushioning is worth way more than the price of admission at only $100.

When you consider price, Charged Controller has tremendous value, but value does not improve or diminish performance. When you take price out of the equation and put the Charged Controller up against some of the top-tier performers on the market today, it doesn’t quite belong in that group. But right below it? Absolutely. Oh, and did we mentioned that the shoe is only $100? 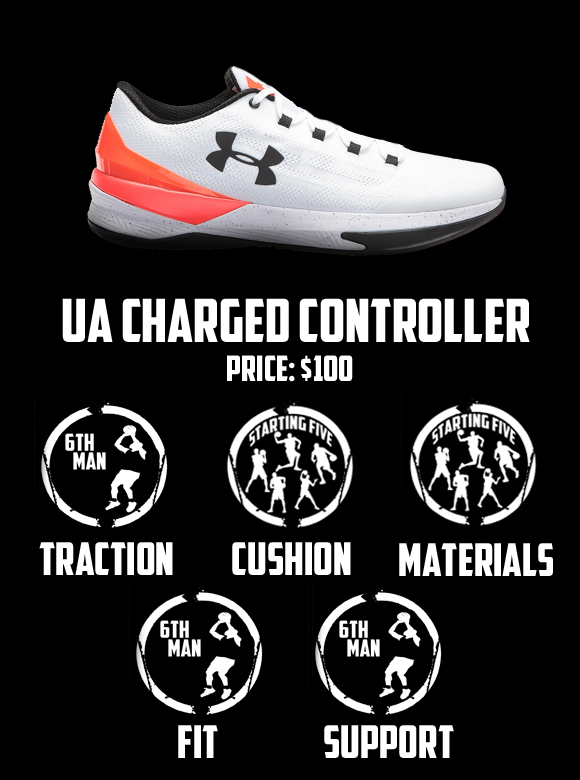