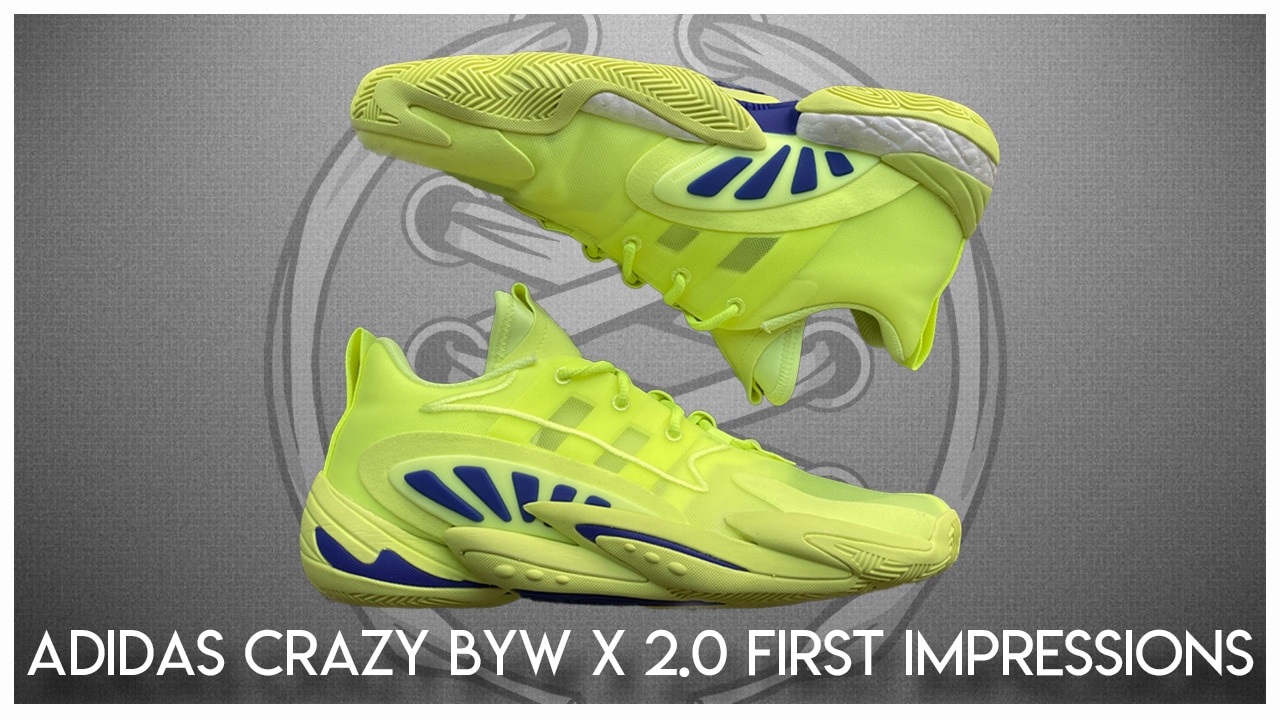 Although the adidas Crazy BYW X 2.0 has been available for some time outside the US, here we are days away from a general release stateside. Not to worry, folks who have yet to get a feel for the second of the Boost You Wear performers, these are our initial impressions.

A couple of things to note about the traction: One, both patterns from the original adidas Crazy BYW X have returned, but instead of herringbone only in the forefoot and the squiggly Feet You Wear pattern solely in the heel, both now share each segment of the outsole.

Comparing a solid rubber outsole of the 2.0 to a translucent rubber on the first edition – both fresh out of the box – the 2.0 took the cake after a brief period on-court in both (not long before gyms across the country shut down). Oh yeah, and the tread looks a bit thicker all around this time, which should hopefully add some durability (click for Chris’s performance review of the adidas Crazy BYW X to see why that’s so relevant).

Boost You Wear, a derivative of Feet You Wear, returns to the 2.0, bringing segmented midsole goodness. This time around, adidas caged the entire lateral side from forefoot to heel in what feels like an EVA foam. This is notable because in the previous model there was a stark contrast between the heel Boost segment – which was cage-free, and the Boost of the forefoot, which was heavily tamed via TPU containment.

So far, in comparison, the Crazy BYW 2.0 feels a little more consistent (though not entirely the same) from heel to toe. Also, with the caging around the heel, the second version seems to have a little less mush, and a little more of a bouncy feeling than the first – something I’d like to believe many will find welcome.

Now, materials of the colorway I’ve got don’t appear to be the same as the build releasing soon in the US, but the same general concept applies, and that is the materials may be the weakest aspect of the shoe – at least for the more standard builds. For what we are seeing the BYW X 2.0 expected to retail for…it’s just disappointing.

For this pair, screen mesh and felt is pretty much all you get. And by felt, I don’t mean felt trying to pass off as suede, I mean felt. I will say, the materials have the potential to do well – especially because of the crazy ventilation received through the screen mesh of the forefoot – but durability remains TBD.

Fit on the adidas Crazy BYW X 2.0 is…tricky? I purchased at a half-size down, although I probably should have gone with the same true size I purchased in the BYW X. The funny thing is, even at a half-size down, the 2.0 still feels slightly wider than my original pair. The width is not so much of a concern though, as it seems the 2.0 will do a good job of locking down the midfoot in the lacing system.

The slightly bigger concern is that the BYW X 2.0 stops short – shorter than the plethora of other adidas basketball shoes I own and have tested in the same size without issue. I’m sticking with it, as I believe that the materials will be forgiving enough after a little wear. But at this moment, my recommendation would be to go true-to-size.

Now, I’ve seen comments from some on social about how ‘clunky’ the adidas Crazy BYW X 2.0 looks. In my try-on, clunky is the furthest thing from my mind. The BYW X 2.0 feels much lighter than I expected for a Boost sneaker and has all of the flexibility and smoothness I could ask for initial wear. The basic support features are there, but I certainly wouldn’t call it an overly-supportive shoe – or at least anywhere near the level of support many may think when looking at the heavily-caged Boost midsole.

With gyms rapidly closing across the country, most of our basketball performance testing may have to halt, but once things are clear, I can’t wait to get the adidas BYW X 2.0 out on the floor. Footwear retailers are also closing up in the US for the foreseeable future, however, the adidas Crazy BYW X 2.0 is still scheduled for release online March 21 through Eastbay for $160, if you’d like to secure a pair to put on standby.

Thank you all for your support and until the next post, take care.