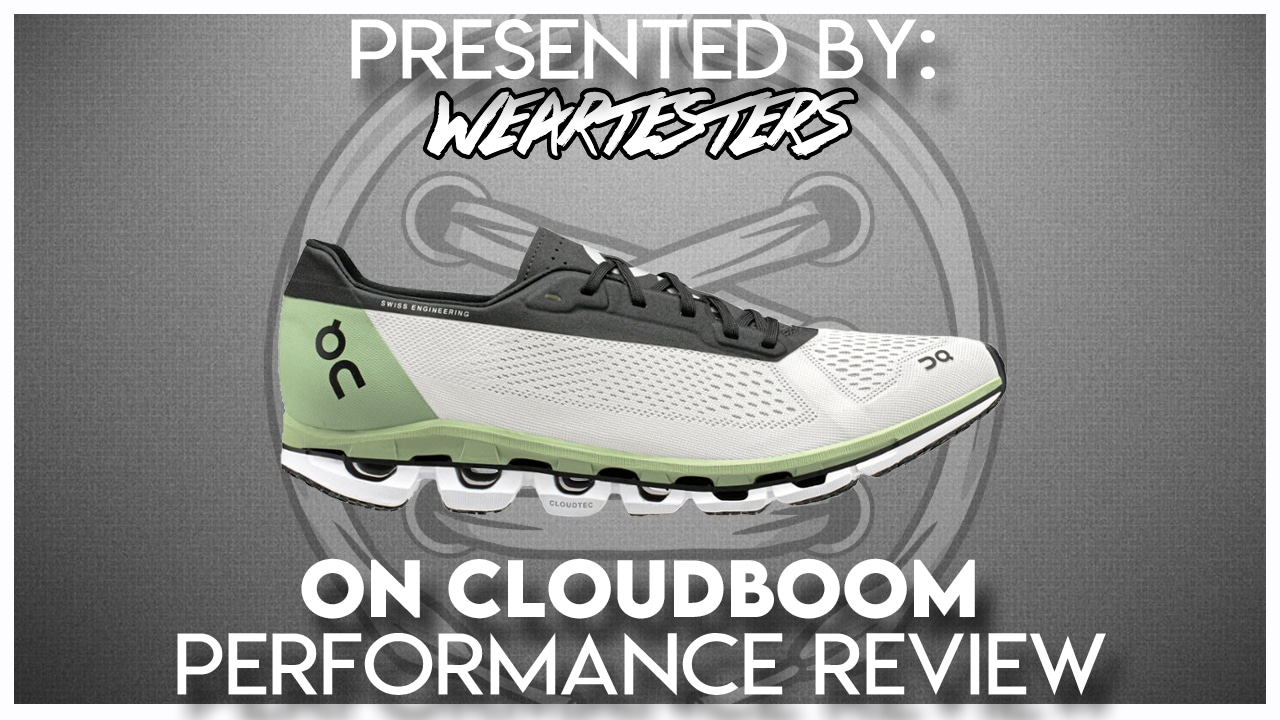 Like most of On’s shoes, the On Cloudboom is beautiful. It’s sleek modern look doesn’t fit alongside most running shoes. But the Cloudboom isn’t all about looks, it’s On’s entrant into the carbon plated racer segment. The relatively new category, founded by the Nike Vaporfly Next%, is a battleground. The Nike Alphafly Next%, Saucony Endorphin Pro, Adidas Adizero Adios Pro, New Balance FuelCell TC and others have made carbon fiber-plated running shoes a fierce competition between all the best running brands. Now we get to see what On can bring to the table.

The On Cloudboom features a fairly minimal cushioning setup compared to most running shoes in the carbon fiber plate segment. It’s too minimal for most runners to use in a marathon and finds it’s sweet spot in mile, 5k, and 10k races. On designates it a moderately-cushioned shoe on it’s website and I don’t agree. The cushion is minimal with a purpose, high speed racing.

The carbon fiber enters the equation with On’s Carbon-infused speedboard. It sits between two layers of Helion foam. It’s similar to On’s typical TPU speedboards but much stiffer and springier. Without giant layers of foam on either sign of the plate, this shoe may be too stiff for some people’s plantar. If you’ve ever felt carbon-plated shoes were too stiff for you, you’ll certainly feel that way about the Cloudboom.

If you enjoy On’s Helion foam in their other running shoes, you’ll like it here. The implementation is different. For example, the foam at the toe is super thin to allow for better ground feel and push off. And to shave weight for race day, On dispenses with their typically plush insole. The ride is even and the rocker shape makes each step feel smooth.

This shoe will work wonderfully for efficient runners who are light on their feet. It’s also a great road flat for those that prefer a minimal feel for their shorter races and speed days.

Interestingly, the On Cloudboom includes great traction. Great traction is not always a feature in the race day segment. The Cloudboom’s traction really bites into the ground using a multi-level repeating “x” pattern on the clouds at the heel and forefoot. The Cloudboom is perfect for digging into a rubber track during intervals.

The traction’s awesomeness notwithstanding, there is a durability question. I’m already burning down the outsole’s forefoot lugs after 50ish miles. You’ll probably get 250 miles out of these. Sticking to the treadmill or track (outside of races) will help avoid the extra wear that comes from roads and sidewalks and extend the shoe’s lifespan.

The Cloudboom doesn’t really have a heel counter, just a stiff TPU overlay at the heel. There’s also internal reinforcement around the edges of the shoe which keeps you on the footbed. Of course, you don’t need a ton of support because you sit low to the ground and the Cloudboom isn’t tippy. So the support is minimal, but you don’t need much either. You can take corners quickly and feel secure.

The entire upper of the Cloudboom is engineered mesh with strategically placed synthetic suede (felt-like material) around the collar and on the tongue. It’s essentially the exact same build as the New Balance FuelCell TC with less layers.

Out of the box, the single layer of engineered mesh makes the shoe feel incredibly light. Based on official weights, it’s heavier than both the Saucony Endorphin Pro and the Nike Alphafly Next%. On’s Helion foam weighs a lot more than Pebax and this is where you feel it. Will the average runner notice the difference? Probably not.

The On Cloudboom fits true to size despite it’s barely there upper. The achilles pillows in the heel are a nice touch and help with comfort. But the fit has a couple issues.

The first is there’s too much material at the toe box. It puckers like crazy when tying the forefoot up tight. If you have a narrow forefoot, you’ll want to take note. It will be hard for you to dial in the correct fit.

Second is the slippy tongue. The laces pass through the tongue twice and it still slips. The Cloudboom badly needs a gusseted tongue. Hopefully we’ll get it in version 2.

Third, the Cloudboom doesn’t have the same luxurious build quality of most On shoes. This is partially due to the lightweight nature of racing shoes, but it just doesn’t convey the same sense of craftsmanship.

Finally, at 9mm, the drop is a bit high but I didn’t really notice it while running.

The On Cloudboom is a minimal racer that will probably pop up a lot in short races (once they start up again). Lighter, efficient runners will enjoy the experience.

For myself, I’d rather run in the On Cloudflow. The Cloudflow is only 0.3 ounces heavier, features a TPU plate instead of a carbon plate, and has more cushioning. While not a racer per se, it’s all around a better, more versatile, and less expensive experience.

Check out more ON shoes

Where to Buy the On Cloudboom

On was not given any editorial control of the review. This review is based on our weartesters’ experiences using the shoes for speed workouts, trail runs, treadmill training, long runs, casual wear, and more.