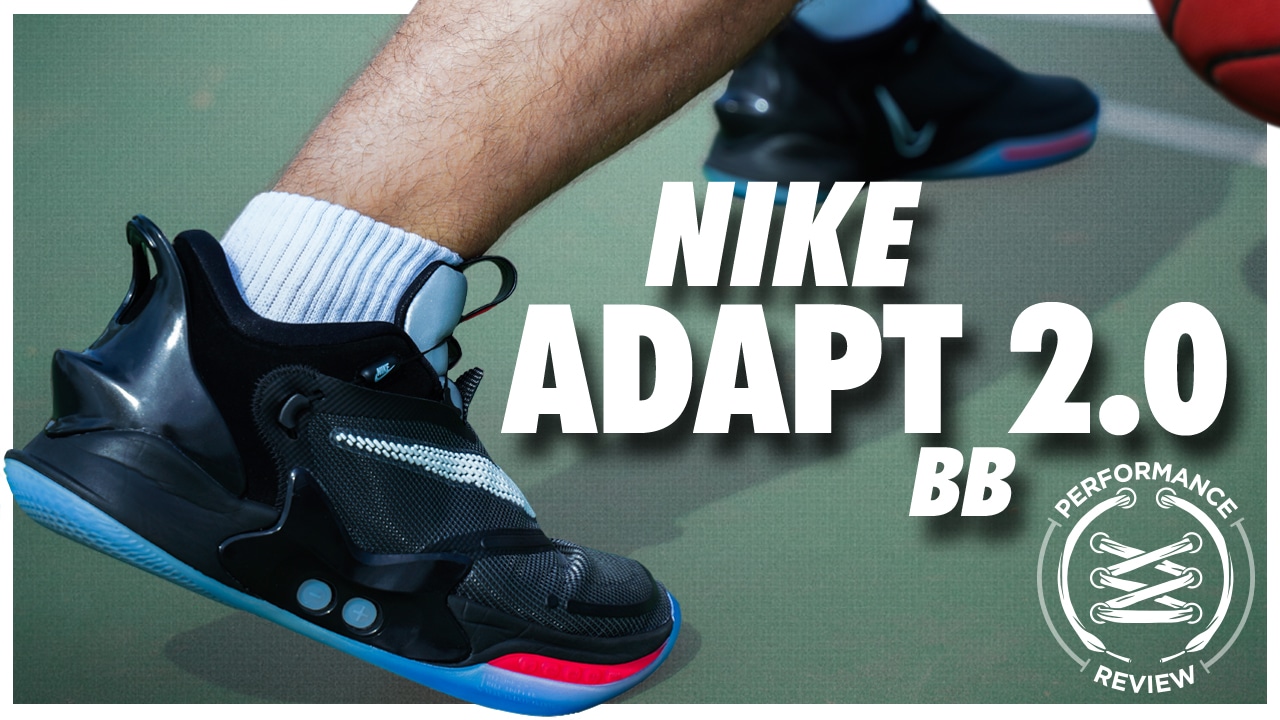 Are laceless basketball shoes the future? We find out in our Nike Adapt BB 2.0 Performance Review.

My two top traction setups have been implemented in both the Nike Adapt BB and the Nike Adapt BB 2.0. The radial coverage in the original model was decent, but there were many times, on every surface I played on, where there would be some grip inconsistencies. My experience with the Adapt BB 2.0 wasn’t any different despite herringbone being used full length.

I suppose the patterns used could be considered as the reason why each of the Adapt models gripped the court as they well as they did — when they did — whereas the rubber compound could be to blame for its inconsistent nature. Nike has used translucent rubber many times over the decades and some work perfectly while others are like the Adapt BB — disappointed.

I will say that the grip wasn’t bad enough for me to stop testing the shoe altogether, but it was inconsistent enough that I would not choose to play in this shoe over something like the Air Jordan 34 or Nike Kyrie 6 — both of which cost less than half the total price of the Adapt BB 2.0.

The cushion has been a solid improvement over the original Adapt BB. While both versions utilize Cushlon midsoles, the Adapt BB 2.0 brought Zoom Turbo into the mix.

In case you were unaware, I love Nike’s Zoom Turbo setup. It’s low profile, springy and ultra responsive. It’s everything I love about Zoom Air setups and it’s always been done right since the cushioning unit sits just under the forefoot versus being encased in a firm foam — which ultimately restricts the feel and movement of the Zoom bag. If you want to try Zoom Turbo as an insole, eBay seller confident2shop sells this insole that comes really close to mimicking Zoom Turbo’s feel.

I never found the Cushlon setup of the original to be poor — I also enjoy Cushlon as a foam on it’s own thanks to my years playing in the older CP3 models from Jordan Brand — but this was a noticeable upgrade that I feel almost anyone would enjoy. Cushlon has a rubbery feel under-foot so when it is coupled with Zoom Air you get a setup that feels like it’s propelling you without you feeling like you’re unstable.

The Adapt BB 2.0 uses a mix of raw materials [heel and tongue pull tab] along with textiles and TPU. It’s not my ideal setup, but it worked well and got the job done.

This setup also keeps the weight down a bit. While weight may be an overrated aspect of a basketball shoe, the Adapt BB 2.0 weighs 19.60 oz — and even for a “heavy” basketball shoe… these things are heavy as hell. So, shaving weight where they could was something I don’t disagree with. Again, the materials worked well so from a performance perspective there isn’t anything to complain about.

The fit… now this is where I just haven’t loved either of the two Adapt BB models at all.

First off, I went true to size (in both versions) and I feel that is the best option. Wide footers may want to go 1/2 size up, but normal footers should be good going true to size.

Now, the laceless system is a hit or miss for me. I thought it was okay in the Air Jordan 33. Great in the Nike Kobe AD FF. And with each of these Adapt BB models I’ve just been “meh” about it. This 2.0 version I do like more than the original overall in terms of the fit, but I still don’t have a need for a laceless shoe over one with laces. There will be some people that could use a laceless shoe and I just happen to not be one of them.

The cable placement on the Adapt BB 2.0 does a much better job at securing your foot and locking you into all sections of the shoe — forefoot, midfoot and heel. However, the power-lacing aspect just isn’t my jam. I can’t seem to get the shoe tight enough without causing cramping or cutting off circulation in my feet. I had the same issue with the original model, and while it is better with the Adapt BB 2.0, it’s still an issue for me. I have to wear them with the cables pretty loose and this is just something I don’t really enjoy at all. Which is ironic as the motorized lacing is the coolest part of the damn things.

Despite having to wear the shoe rather loose, the support was pretty damn good. The heel counter works great and the TPU wings located at the lace buttons also helped keep my foot on the footbed. Thank goodness as that was the one area I was really worried about once I’d get the “laces” to a point to where they were comfortable for me. At the midfoot is where the motor is housed, and it’s pretty rigid there, which ends up helping with torsional rigidity.

Overall, I found that the Nike Adapt BB 2.0 was better than the original Adapt BB, but I still don’t feel that these are necessarily for me.

I prefer laces. Better materials — even though this setup works fine. And more importantly, I like to have a more reliable traction setup.

While price never equates to performance, I cannot help but factor in the $400 price tag these are listed at. This isn’t some shoe I’m choosing to buy at a reseller’s listed price. The $400 is the starting price at retail. I can find shoes on clearance from a year ago that I feel out-perform the Adapt BB 2.0…and then I can buy four pairs of them and still come in under $400. I understand that factoring in the price tag is biased on my part, but I can’t help it with this one.

However, the Adapt BB 2.0 is solid in most areas. Cushion being my personal favorite aspect of the shoe. I could even deal with the traction a bit, but the shoe being too tight or too loose is the part where they end up losing me.

If you’re ball’n like that and wish to have the latest and greatest in technology then this is pretty much where it’s at. However, if you just want a good shoe at an affordable price then you can literally go with anything else.