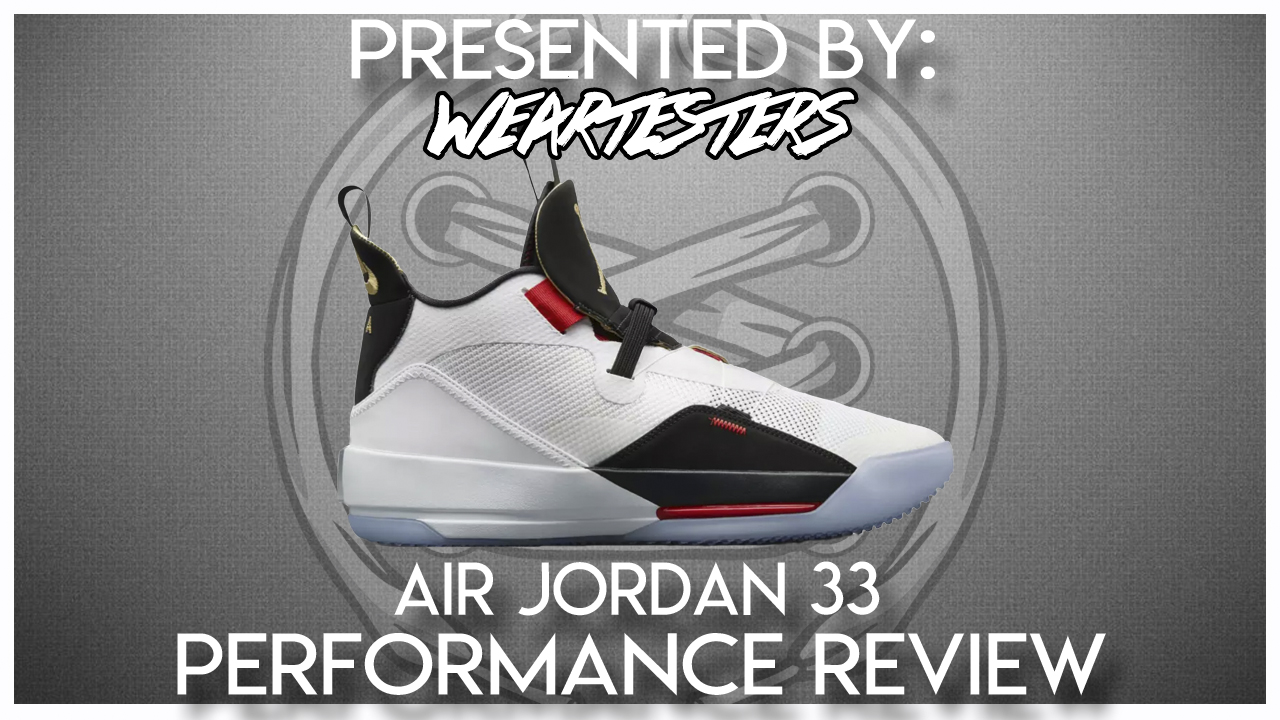 After thirty three years of flight the Air Jordan 33 performance review is here.

The traction on the Air Jordan 33 reminded me a lot of the Nike Kobe AD NXT 360, and both patterns performed similarly. Despite being translucent rubber, the outsole of the Air Jordan 33 bit the floor nicely and, for those that care about the sound traction makes, they were loud as hell — screeching compared to everyone else in the gym. However, as we all know, sound/squeak does not equal traction.

Those that wait for a solid rubber colorway should receive slightly better grip solely based on the rubber compound, but as it stands, the Air Jordan 33 was solid. When compared to the Air Jordan 31 and 32 the 33 is the best of the bunch.

There is one area on the outsole where I’d slip semi often. It’s located at the ball of the foot and initially I thought it was just from the floor being dirty. It turns out I had the slip no matter which floor I played on so I think it’s due to the outsole’s shape in that specific spot. It’s right where the Zoom Air unit protrudes so its semi-rounded and then arches up a little.

To avoid slipping I had to change my footwork a little. Instead of putting pressure on the ball of my foot I had to make sure I was planting with most of my forefoot instead. This solved the problem and if you happen to run into the same issue it could help you out.

I would not recommend the AJ33 for anyone that plays primarily outdoors.

Unlocked Zoom Air is back in the forefoot while the heel features a small Hex-Zoom unit, something we haven’t seen in an Air Jordan signature since the 22.

If you played in the Air Jordan 32 then you’ll receive much of the same in terms of mobility, court feel, and impact protection. The midsole is a bit stiff with the FlightSpeed plate so some breaking in is required. Once broken-in you’ll be able to maneuver across the court as you would normally with that added spring to your step. Until then, the Air Jordan 33 does feel a bit restrictive and bulky. If you can get past the initial break-in period then I think Zoom Air lovers will enjoy this shoe.

The Hex-Zoom unit at the heel went unnoticed for me. I rarely ride on my heel unless I’m trying to break/slow down. It’s there if you need it, but the primary cushion source is located up front — where I prefer it to be.

Mesh and synthetic overlays make up the upper of the Air Jordan 33 and they feel nice and light compared to the rest of the shoe. No, it isn’t premium, but it’s a very similar setup to the Jordan 32 and nobody seemed to complain about those being comprised of textile and synthetics. Why start now?

Unlike the 32, the textile here is much lighter, thinner, and more breathable. The synthetic overlays located in the forefoot gave me the feeling of wearing a regular shoe — one made the old fashioned way versus the knits and textile builds we see today. Again, it’s nothing premium but in terms of performance it all worked and worked well.

Lateral containment/support was taken care of with the panels in place as was rear coverage. Those that actually try the shoe on and wear them on-court should enjoy them the way they are.

The Air Jordan 33 fits true to size, but it’s snug width wise — something I enjoy but wide footers may not.

Lockdown is interesting. The shoe does not have laces, the standout feature on this years model, and it’s strange. I have found that I prefer laces overall; it’s easier for me to adjust each row to fit my foot the way I need rather than mess around with the pull system currently in place. However, on the flip side, untying the Air Jordan 33 — if we can even call it that — is a breeze and I definitely enjoy that aspect of the new FastFit lacing system.

Does it work? Yes. It actually does. Is it perfect? No. You need to mess with things quite a bit before you find the fit that works for you. You can easily pull the shoe too tight as well — I went into detail about that in my performance teaser so check that — but I haven’t had a problem since figuring it out. Is it cool? Hell yes. It’s one of the coolest features we’ve had on an Air Jordan since being able to change the midsole cushion — plus, I get a big kick out of seeing tech.

How durable is the thin cable that is the lace? I haven’t had any issue with mine at all. I saw online that a Chinese wearer had his break on him and that may be inevitable (not every pair will be perfect). I just hope we don’t have an Air Jordan XX8 situation where many consumers like the shoe but they end up not being durable enough to last. I think we can all admit that the Air Jordan 28 is amazing, but that Zoom Air popping issue really took a toll on people.

Overall, I think the new FastFit lacing system is really neat but not necessary. I like the eject part of the system more so than the tightening portion. I’m curious to see if this system will be a one and done thing or if we’ll see it modified and enhanced next year. If the brand could improve on this current system then I think it will be onto something. If JB only uses this system on the Air Jordan 33 then I feel most will call it a gimmick that worked for some and not others.

Despite being laceless, support in the Air Jordan 33 is quite nice. The overlays really help keep you on the footbed of the shoe and the FastFit system doesn’t give once taught. At the rear there is a strap system that works well and I’d love to see that on more shoes moving forward. It really emphasized how important heel lockdown is when we talk about support. It allows a closure system like this to work without being dangerous.

The midfoot torsion support is a bit too much, as mentioned earlier, because you really need to break in the FlightSpeed plate. Once it’s good then you’ll be fine, but the Air Jordan 33 is noticeably stiff compared to most other shoes currently on the market.

The traction and cushion are both very solid in the Air Jordan 33. Materials work but the FastFit lacing system may throw some people off. There is room for improvement, but what we have is a very functional shoe that may go unappreciated…for now. In a few years I think we’ll look back and think “Man, the Air Jordan 33 was ahead of its time” — much like we do with most of the previous Air Jordans that have come before it.

People are either going to love or hate the Air Jordan 33, and such is the way of the internet. Apparently you can’t just like something anymore because if it isn’t a 10 its a 0.