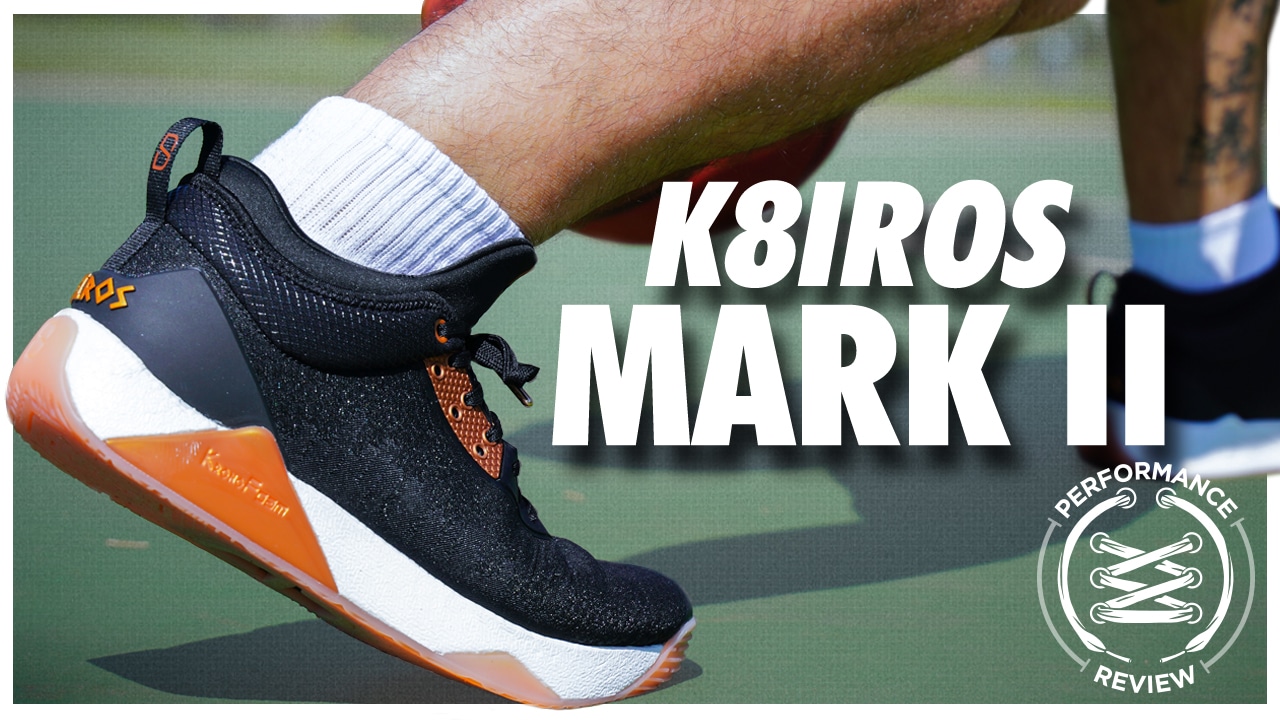 Spencer Dinwiddie created his own brand and footwear line, and they are better than you might expect. Click through for our K8IROS Mark II performance review.

I never had the chance to grab the K8IROS 8.1, but we have some WearTesters Discord members that had and they collectively agree that the traction was lacking. I’m not sure if those that bought the original model were able to provide feedback or not, but the traction redesign was a main point of focus for the Mark II.

The midfoot and heel design look similar to the original, but the forefoot was completely overhauled. Radial traction was used for the majority of the forefoot and it’s worked great on every court I’ve taken them on. From the local 24 Hour Fitness, to LifeTime to random invites that have me playing in churches. Traction was not only not an issue, but good enough to where I have the shoe in my gym bag still [after testing] just in case I need something with traction that is more reliable than whatever I might be testing next.

I was fortunate enough to be able to play in both the solid rubber and translucent rubber versions of the shoe and while I choose to play in the Kronos colorway [over the Graffiti] the outsoles both played damn near identical. The rubber is tacky, but doesn’t attract dust like a Swiffer. It also hasn’t frayed at all which is weird since almost all shoe brand’s rubber start to fray after a few wears. However, I still wouldn’t expect them to last super long outdoors, but my time outdoors was pleasant due to the cushion.

KronoFoam is used for the midsole. It’s a Pebax foam that’s been implemented full length and it offers a bouncy ride from heel to toe. There is a minor heel to toe drop which makes the heel a bit more squishy than the forefoot which is why there is a TPU panel at the rear to help stabilize the area.

Most will ask for some sort of comparison to a cushion that they may be more familiar with and all I can really compare it to is adidas’ Bounce — only this is a bit more bouncy.

The foam itself is on the softer side so using it within a carrier foam or using a TPU retaining wall — like the Way of Wade 8 — would allow the foam to be as springy as it is while ensuring maximum stability.

Textiles are used along the entire upper and it is very similar to what the Dame 2 used. The Jacquard style knit is strong and tight while remaining flexible enough to allow you to lace them up straight out of the box without needed to break them in much.

There are some areas of thin TPU fuse-like material in high-wear areas such as the toe. It’s also used along the eyestay to try and prevent the textile from tearing after you’ve laced them up to your liking.

So far, everything has been durable, comfortable and form fitting. Although, that last bit might be due to the sizing.

They fit a bit short and only come in full sizes. This means that there are no 1/2 sizes available like 8.5, 9.5 and so on. I went true to size and my toes are right at the rubber — luckily the materials are soft enough to not cause black nails. So, my recommendation would be to go true to size if you wear a whole size — if you wear a size 9 then order a size 9. They will be snug but they’ll also be secure. If you wear a size 9 and go up to the next available size [10] then they’ll likely be too long for you and you’ll lose all security and support. If you happen to wear a 1/2 size [like a size 9.5] then going to a size 10 would be your best bet.

On-court, the lockdown was great. The lacing is asymmetrical and forces the upper to wrap around the foot tightly and securely. Again, this may be due to how snug the shoe is, so this may be different for those that wear 1/2 sizes.

All of the features you’ve come to expect from basketball shoes are here. Heel counter — check. Midfoot shank — check. Outrigger — check. Yup, it’s all here. Everything works really well together as well.

However, one change I’d like to have seen was a slightly wider forefoot. The midsole is soft, as is the upper, so something a bit wider, that cups the foot a bit, would be great for added stability. The way the shoe fits allows everything to work perfectly, but if you had a bit more wiggle room inside the shoe it may cause a bit of instability on certain movements. This wouldn’t be needed if the foam was inside of a carrier foam or had a TPU retaining wall, but as it is right now, that is what I would have changed.

Overall, the K8IROS Mark II was a pleasant surprise. I wasn’t expecting much, but was hoping for the best. Turns out the shoe is solid in every area and pretty beastly. Cushion is solid. Traction is really solid. Fit might be a bit weird for some with the whole size only offerings. And support is solid as well.

It’ll be interesting to see where the line goes from here. Hopefully this model does well enough to warrant a third model in the near future.

If you were interested in checking out the K8IROS Mark II they’re available here.