adidas killed it with the D Lillard 2… 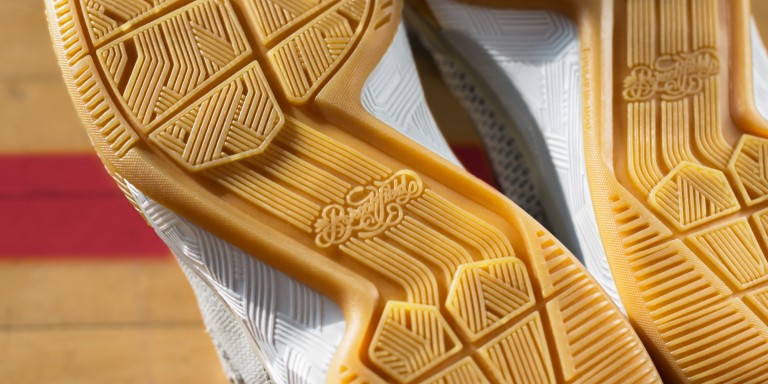 Traction – Continental rubber is used for the outsole, which is tire rubber, but dust was still an issue — albeit a small one. The pattern itself is the culprit. It’s just too tight. Remove every other groove and I think it would have worked out a bit better. Not to say the traction was bad…if it was then I would immediately dislike the shoe, which I don’t.

If the floor is clean then you’re more than good to go. Moderate dust and you’ll have to maintain wiping the outsole clean every so often. If there is heavy dust, like what you’ll find at 24 Hour Fitness, then it’ll adhere to the outsole within the tight grooves causing some slippage.

With all that being said, I still enjoyed the traction a ton. I stuck to the floor more than I slipped, and with a quick wipe you’re good to go. I wouldn’t use them outdoors just because the tread pattern is thin, but Continental rubber is pretty sturdy so you may be fine either way. If you have played in the D Rose 6 and enjoyed their traction, then you’ll enjoy these as well. 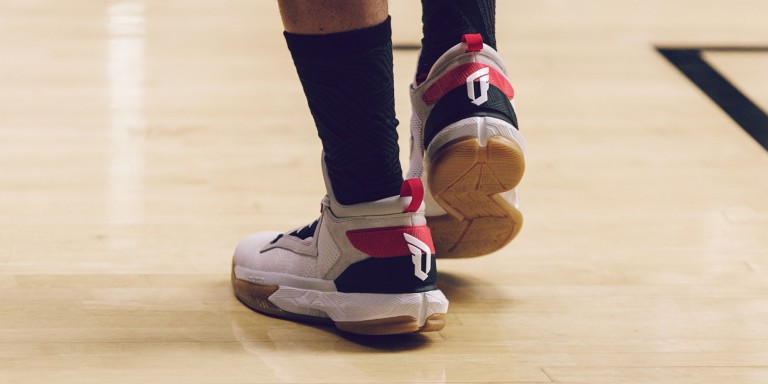 Cushion – adidas has implemented their new BOUNCE cushion into the D Lillard 2, and I freaking love it. Yes, they feel like they have some bounce to them. The cushion feels very similar to Under Armour’s Micro G, so if you have played in Micro G then that’s what you can expect with these. It’s full length, it’s comfortable, it protects against impact, it still allows for solid court feel…and it’s $105 dollars. What. The. F***. Yeah, if you hoop and you don’t try out the D Lillard 2 then something is wrong with you. 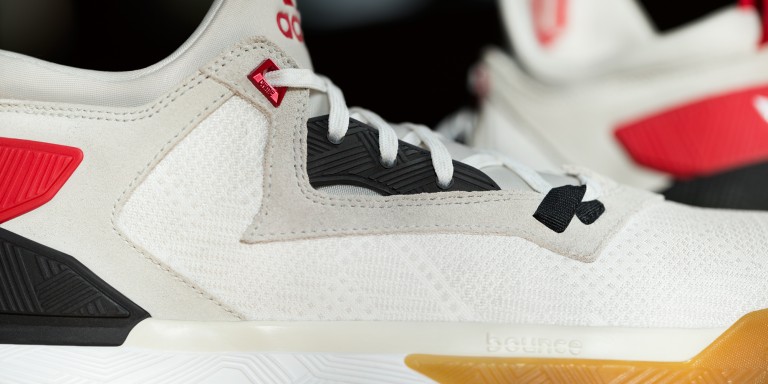 Materials – This might be my favorite part of the shoe besides the cushion. adidas has utilized a Jacquard material for most of the upper. The shoes retail for $105. Nike and Jordan Brand use the same materials and charge anywhere between $170-$225. Why pay more when you can get something that is the same for less? The materials are soft, supportive, and require zero break-in time. There are other materials used, but they are insignificant compared to the woven.

Now, I will say that only the ‘Home’ and ‘Away’ colorways use the material. At least to my knowledge. The other colorways that we’ve seen leak seem to use what looks to be a synthetic leather upper. I’d personally go with the Jacquard. It’s the best bang for your buck. 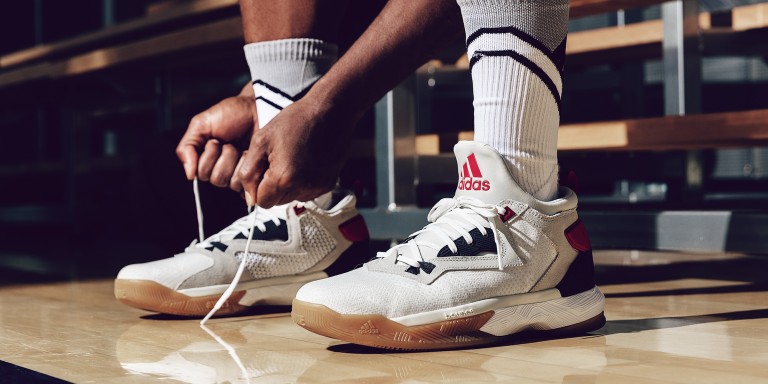 Fit – I personally feel they fit 1/2 big; they didn’t feel too wide, but they ended up feeling a bit long. Trying them on will ensure you have the best fit for you.

Lockdown is literally perfect. The heel counter does it’s job perfectly, keeping your heel in place to avoid potential injuries. The lacing structure at the collar draw your ankle and heel into said heel counter — working in tandem with one another. There are midfoot lockdown straps made of rubber that work perfectly. The shoes fit and feel so perfect on-foot that I can’t believe that they’re an adidas model. adidas has had a track record, over the past few years, with their shoes where in they just fit weird at times. These don’t have that feeling. Once you’re in the shoe, you’re going to love them. 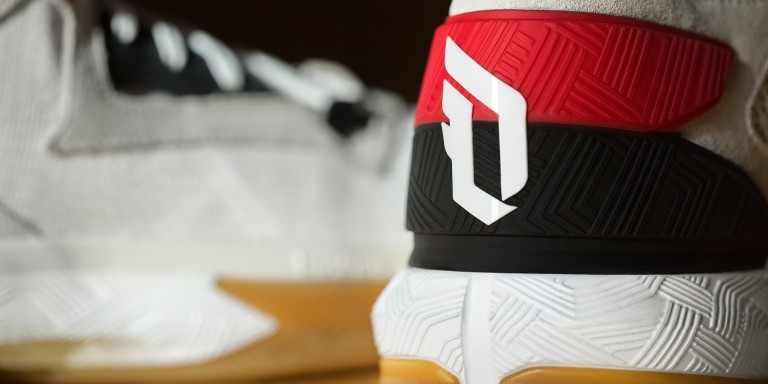 Support – Like I mentioned above, the lockdown was nearly flawless which means their support is nearly flawless as well. They provide you with all the support you could want out of a shoe without feel restrictive at all.

The lacing system and heel counter work so well that it’s almost like a toddler’s carseat. It might look bulky and cumbersome, but when you’re strapped into it you’re good to go. Not that I remember what it’s like to be strapped into a toddler’s car seat…it’s just how I feel when I look back at my son in the car. The seat looks like a beast, but you know he’s comfortable and safe. I suppose that is the perfect way to describe the Lillard 2’s…you just feel comfortable and safe while wearing them. 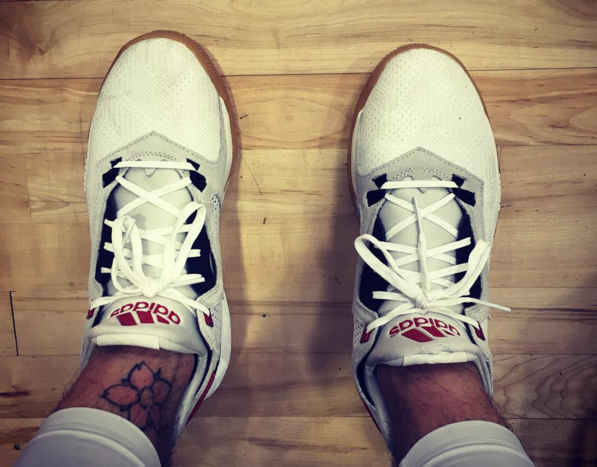 Overall – I absolutely love these shoes. Yes, I like them more than the D Rose 6. No, BOUNCE is not BOOST. However, just because BOOST is the best cushion system around, that doesn’t mean there aren’t other options that you’ll be just as happy with. The materials, the lockdown, the support…the shoe is f***ing awesome. Really. F***ing. Awesome.

I seriously can’t believe these are only $105. This might be the best bang for you buck shoe I’ve ever played in. They offer premium features for half the price of competitors’ offerings. They even cost less than adidas’s own D Rose 6 — and I feel it’s a better all-around shoe.

If you are serious about finding a great shoe to play in without breaking the bank then the adidas D Lillard 2 should be at the top of your list to check out. Had the shoe released in time to have been considered as a Top Performance Pick of 2015 then they would have knocked my #1 pick(s) down to #2. 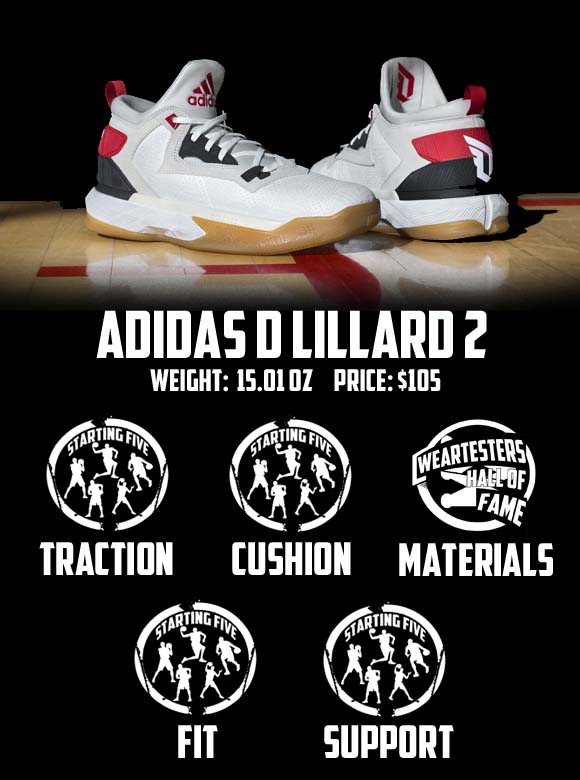