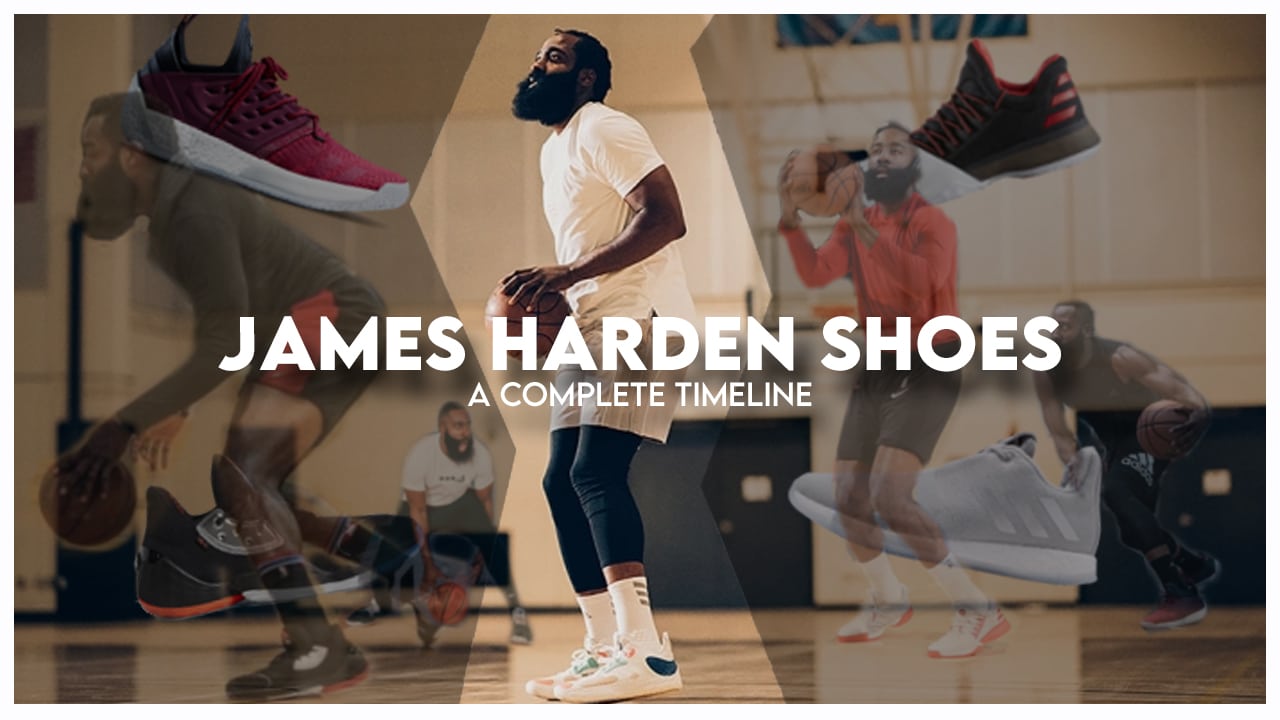 James Harden’s shoes are, in general, built like The Beard himself. His signature line with Adidas is well known for offering great performance with an edgy, innovative design that caters to versatile players that need a little bit of everything. The Harden line is truly a reflection of the style and personality of the player. But James hasn’t always had Adidas by his side to create the perfect shoe for his needs.

James Harden was actually a Nike guy both in college at Arizona State and when he entered the league. Even back then, James reached for well-rounded models that provided a mix of versatile features for both guards and big men.

James grew up in Los Angeles and attended Artesia High School (Lakewood). Even that early, James was a BIG guard. He wasn’t super tall, he was just thick and shifty.  He reminded a lot of fans of a lefty Paul Pierce and it’s easy to see why.

Hardens go-to shoe in high school was the Lebron IV. This model was pretty wild. The upper used a sturdy Foamposite-esque material. The midsole was basically switched out for a 3/4 length carbon fiber shank and a full length Zoom Air unit encased in a drop in foam insole. The outsole was then cut into five sections to offer more flexibility,

You can see why a player like Harden might reach for these. The Lebron IV offered some premium performance features perfect for his playing style. It also came with outlandish esthetics and a retro feel via the inclusion of foamposite.

Harden would need a little more responsiveness in the future, but this was a good start.

Harden would go on to play college basketball for the Arizona State University (ASU) Sun Devils. At the collegiate level, Harden would again display his extremely effective, seemingly slow-paced, “get to the rim whenever I want” style of play. During his two year tenure at ASU, we saw James rock a team colorway of the original Hyperdunk, the Nike Air Max Elite 2, and several other models. But the shoe Harden used the most was the Lebron VI.

The Lebron VI was again a very “Harden” shoe. It featured retro styling and materials making it look like a beefed up performance-focused Air Force 1. It also included top of the line performance features that again put a lot of emphasis on cushion:

The LeBron VI came with a full-length Air Zoom unit that was double-stacked at the heel, less restrictive but still supportive materials, and a cup sole for stability. The shoe also featured a Dynamic Fit sock liner and a carbon fiber heel clip for added stability.

It’s also worth noting that LeBron insisted the shoe be designed specifically for streetwear, as well as on court performance. This design ethos explains the Air Force 1 vibe and might also explain why Harden chose a fashion conscious top performer like the LeBron VI.

Harden would be drafted 3rd overall by the Oklahoma City Thunder and join a young group of budding stars including Russell Westbrook, Kevin Durant, and Serge Ibaka. He would play 3 seasons in OKC and during that time he wore some awesome shoes on court.

Harden played in a wide variety of Nike models during his Thunder years, including the Nike Zoom Sharkley, the Nike Hyperize (promoted with one of the best shoe commercials ever), the Nike Lunar Hypergamer Low, and some fire OKC-themed colorways of the Nike Kobe 4.

During his OKC years, Harden started to hone his power guard style of play and his evolution on the court was mirrored by his choice in kicks. He started choosing lower cut, more responsive models aimed at smaller, lighter guards (like the Lunar Hypergamer Low).

Towards the end of his OKC run, he also received legit player exclusives (PE) with his own logo and team specific colorways. Those PEs got sneakerheads looking forward to a Nike Harden signature shoe.

After three standout years with OKC, Harden was dealt to the Houston Rockets, where he wore Nike basketball shoes for two more seasons.

When Harden arrived in Houston, fans hoped he’d become the franchise’s superstar, and that’s exactly what happened. He immediately became the go-to guy for the Rockets.

Nike Zoom Run The One

Adidaswas shifting its focus to individual endorsements and pursued Harden relentlessly, even delivering a truck full of shoes to his house. Nike would ultimately decide not to match adidas’ offer and Harden officially joined the three stripes.

At the time, adidas basketball was enjoying a renaissance in the performance basketball market by offering top performing models with innovative and, to put it simply, cool designs.

Especially with the 2016 edition, adidas knocked it out of the park by creating a shoe built for James Harden. A low top, funky looking, responsive shoe with enough cushion for a 220 pound, 6’5 combo guard. Once they discovered the basic formula, it was time to give James Harden his own shoe.

The Adidas Harden Vol 1 was almost the perfect first signature shoe. It was an excellent on-court performer and stylistically it was a great reflection of Harden as a player.

It featured a data-driven traction pattern designed specifically for harden, and a special full-length slab of Boost that was compressed to offer better support and court feel, without sacrificing impact protection. In addition, it featured premium materials worthy of a premier guard in the NBA.

In 2018, Harden would get his second signature shoe as well as a scoring title and a regular-season MVP trophy. Not too shabby.

The Harden Vol 2 was a bit of a step backward compared to the Vol 1. The traction wasn’t great and the materials were on the cheaper side. But the shoe did pack a big slab of Boost while impact protection and court feel were top-notch. All around it was a decent model, even more so if you prefer to hoop outdoors.

James Harden’s 3rd signature shoe, the Harden Vol 3 also released in 2018. At first glance, the Vol 3 was a bit of a letdown. Visually, it’s one of the plainest shoes Harden laced up. The initial colorways were just a bit…meh. Performance was a different matter. The Harden Vol 3’s performance on the court was nearly perfect. Sometimes simplicity garners the best results.

There really wasn’t anything special about the Harden Vol 3,  it was so simple that it does a little bit of everything, and each little bit is done right. For such a flamboyant player, the Harden Vol 3 was a very conservative shoe. But the resulting on court performance was excellent.
Plus he pulled off these shenanigans wearing them:

As more colorways dropped, we got a little bit more of that Harden flare infused into the shoe.

The most recent signature Harden model to drop was adidas Harden Vol 4. The shoe officially released in October of 2019, but we first got to see them during some of Harden’s practice sessions.

Immediately, they looked much more like a Harden shoe than the Vol 3. The design was bold and combined old school materials and new school performance. Adidas claimed the shoe was “the perfect blend between innovation and fashion”.

Everything on the shoe was excellent. Lockdown and stability were two major wins while the traction was a huge plus. If there was one issue with the model, it was the cushion. The Harden Vol 4 featured Lightstrike foam instead of the boost we were accustomed to seeing in a Harden shoe.

The design of the shoe supposedly took 2 years and was greatly influenced by data on Harden’s style of play. The switch to a Lightstrike midsole made the shoe lighter. As one of the players that logs the most minutes in the NBA, a lighter shoe means less fatigue over time.

In the 2019-20 season, Harden had another special sneaker moment on the court after the passing of Kobe Bryant. As a tribute, Harden broke out a pair of the Reebok Question Mid Kobe PE in a Lakers colorway.

While Kobe was a sneaker free agent during the 2002-03 season, he rocked a wide variety of different shoes, from the Jordan 3 to Air Force 1. He even strapped on a pair of Converse Weapons. One of the shoes he used was a classic white, purple, and gold pair of the Reebok Question Mid.

It was actually a touching, sneaker nerd move. Kobe had beef with adidas dating back decades. Harden, as an adidas athlete, had to find a pair of shoes within the brand with which to pay tribute to Kobe.

As luck would have it, Reebok was purchased by adidas and James got his hands on this iconic pair of the Question Mid.

Harden would actually go on to release his own colorway of the Question Mid later in 2020.

The fifth shoe in the Harden line is on its way. By this point, we have seen a ton of images of the first two colorways that Adidas will be launching.

The shoe will bring back full-length Boost via an insert inside a Lightstrike carrier which will function as a removable midsole. Adidas claim the Harden Vol 5 will have a revolutionary fit and lockdown for “ultimate freedom of movement on the court”.

The Harden Vol 5 will drop in two colorways, one primarily red Creator colorway and one white Futurenatural colorway.

So far the Harden Vol 5 looks and sounds like a very “James Harden” shoe. The design is odd in a good way, there’s a clear emphasis on innovation and performance, and they’re built to let Harden be Harden in all of his shifty, creative, bruising glory.

Evan is a basketball and kicks fanatic based in Madrid, Spain. He's worked as a marketing director for Spain’s ACB pro team, BCA MoraBanc Andorra, and for the Spanish Basketball Federation during the 2014 Basketball World Cup. As a life-long hooper, Evan is all about on-court performance.