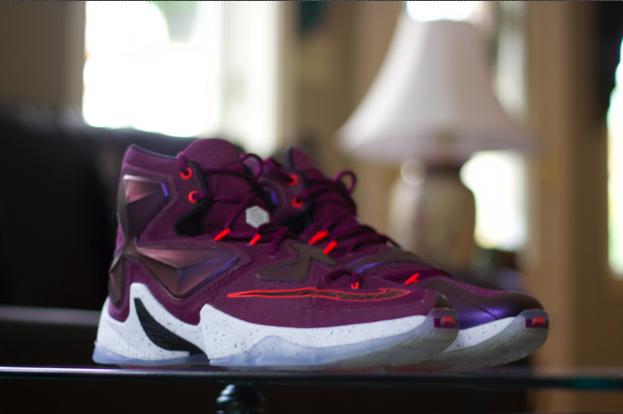 The LeBron signature line has been performing better and better over the last couple of years…and the trend continues.

Traction – Initially I thought the traction was going to be one of the shoe’s biggest drawbacks. When I put them to the court, they proved me wrong. On clean and mildly dusty courts, these things are flawless. When I took them to my local YMCA, which has a really dusty court, I did have some slipping here and there but it was nothing major. The grooves are spaced apart very nicely, so an occasional wipe will get the job done.

Cushion – One of my biggest issues with the LeBron 12 was the inability to feel the Zoom units in the forefoot. Although there were five total units, they couldn’t be felt due to their smaller size. In the LeBron 13, there are only three Zoom units in the forefoot, one of them being a large 13 millimeter unit. The large unit can really be felt in comparison to the smaller units, which I really enjoy. The same 13 millimeter zoom unit can be found in the heel, and once again, it is very responsive. One disappointing aspect of the LeBron 12 was its heel-to-toe transition. The Posite in the heel made the shoe feel very clunky. They got rid of the Posite that was in the heel and extended the Phylon midsole to the very back of the shoe, allowing the shoe to compress in the heel and make the transition much smoother.

Materials – The upper is a one piece booty with zone overlays of fuse, mesh, and posite. The fuse and posite areas are placed where you need more support, while the mesh is located in the forefoot where you need flexibility. Dynamic Fywire does its job once again by adding a snug fit. Overall, I was surprised by the materials. I thought they would be much stiffer, but they broke in very nicely after only a few wears.

Fit – They fit true to size in my opinion and actually are one of the nicest fitting shoes I’ve laced up in a while. The Flywire can really be felt containing your foot as you tighten the laces and the high collar and heel counter combination keeps you locked in at all times. Some people have complained that the high collar rubs into the lower part of the leg and causes irritation. I haven’t experienced that, so I have nothing negative to say about the collar height.

Support – If you’re looking for a shoe with plenty of support, the LeBron 13 is the shoe for you. The multiple layers that make up the materials are extremely supportive while still offering enough flexibility for quick guards that are always on their toes. The base of the shoe is also fairly wide, preventing you from teetering over. The shank plate underfoot provides plenty of arch support as well. The shoes have support all over the place.

Overall – I was extremely pleased with the LeBron 13 and liked it much better than LeBron 12. Both the traction and cushion were upgraded in my opinion. The supportive yet flexible upper is also a really good look. Of course $200 is a very high price point, but if you’ve got the money, why not go for it? Not to mention, many colorways will be on sale soon…

If you’re interested in trying out a pair they’re available now at Nike.com.