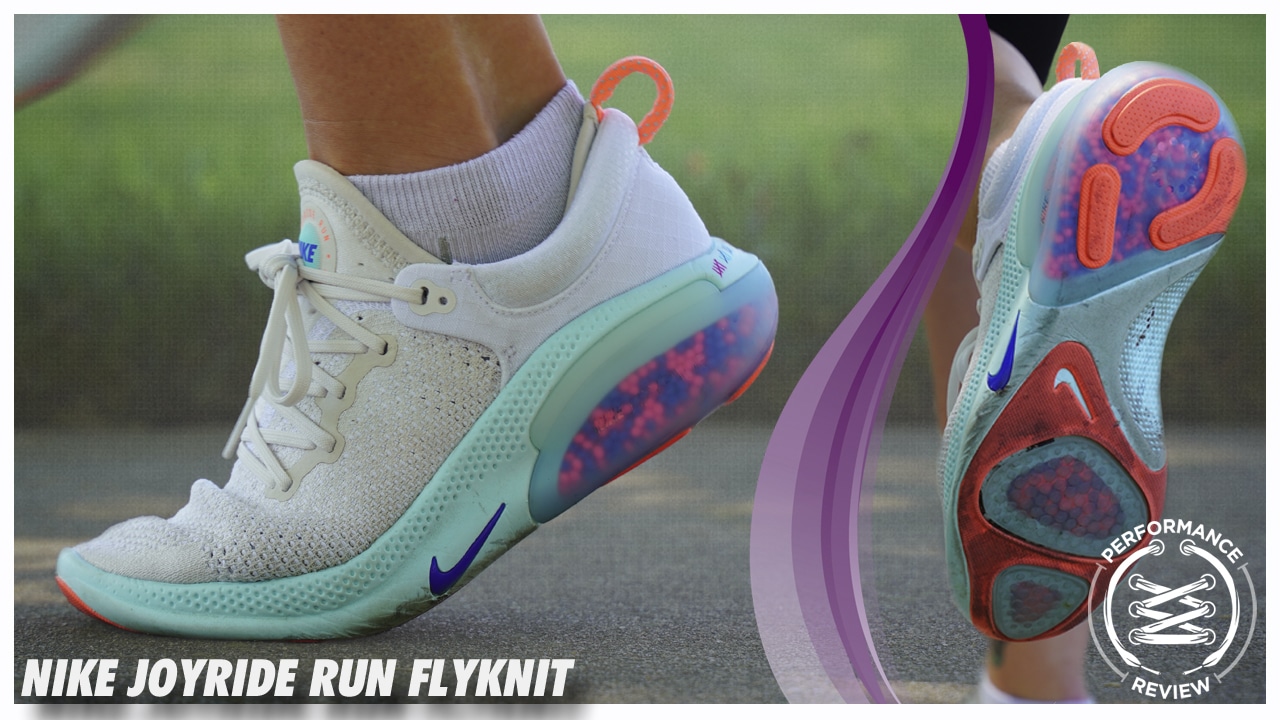 A Detailed Look at the Brandblack 2019 Footwear Collection

The Nike Joyride Run Flyknit is the first shoe to use Nike’s newest cushioning system, Joyride. The Joyride Run Flyknit puts four pouches of free flowing foam beads beneath each foot. When you put on the shoe, the beads conform to your foot sort of like if you were stepping on a bean bag. The idea being the shoes become a customized cushioning setup for anyone who wears them. This both sounds and looks awesome. But does Joyride work? Let’s find out.

After we received the shoes from Nike, both Jodi and I both ran a lot of miles in our pairs of the Nike Joyride Run Flyknit. We did long runs, speed workouts, treadmill work, and wore them casually. Our breakdown below includes our thoughts on the performance of the shoe across multiple categories.

Jodi: What’s everyone buzzing about? The crazy cushion Nike is now offering with the Joyride Run Flyknit. As I read some of the initial articles about the shoe, here’s the picture that formed in my head: Thousands of little foamy beads pressing into my feet, forming perfectly around it as they propel me forward throughout my run and snap back into place with each step. All the while bringing joy to my running life and yours, whether this is your first run ever or just a simple recovery run.

Well….hate to say it, but that’s not what happened to me. And I LOVE running. If you’ve seen any of the press then you already know the TPE beads are housed inside of four different pods arranged from heel to forefoot with the most beads being placed in the heel. I can tell you that the beads do snap back into their original shape after each run because every time I would put them on my feet had to remold the footbed. Which I guess is cool if you want to feel like you are running in a brand new pair of shoes every time you go for a run. My problem with how the pods are set up is that sometimes the beads will all get mashed in one direction. A member of our Discord Community said it best when he compared that feeling to a no show sock slipping off under your foot. Almost every morning before running I’d have to stomp around and wiggle my foot to get those beads to smooth themselves out. And that was just the problem I had before getting out the door. The foam cushion, SR02, that holds the pods is super soft. But it’s not the same density as the beads in the pods. And this is especially true of the sidewalls. So after about 2 miles of running, I could feel the foam pressing up into the sides of my feet where the pods tapered off. This was especially present in the forefoot. It also became even more obvious when making tight turns where I could feel the beads shift under foot.

Drew: A quick search around the internet reveals that Joyride is one of the most polarizing cushion technologies in recent memory. There’s people who absolutely hate it, people like Jodi who didn’t have a great experience, people like me who thought it was solid in certain circumstances, and then there’s even people who love it. There’s a reason for this. When you get the shoe on foot, it feels weird. It took me some time to get used to the beads conforming all the way up to my high arch. For some, it will feel like there’s not any wiggle room in the shoe and they’ll hate it. Others might enjoy the sensation. This is a shoe you need to try on just to feel this new technology in action. You may not like it, but it’s worth it to feel how different it is from other shoes.

While I’ve been wearing the Joyride Run Flyknit, any time I meet someone in the sneaker industry close to my size 11.5 foot, they want to try it on. So I’ve let them. It’s given me a lot of interesting feedback and further confirmed the polarizing nature of the shoe. One footwear designer had the best comparison. He said the way the beads move under foot feels a lot like 90s era Reebok DMX. For those that don’t remember, in the original DMX, as your weight shifted, air actually moved between pods in the outsole. The sensation isn’t exactly the same but it’s close. Another designer compared the Nike Joyride Run Flyknit to the VaporMax because of its polarizing feel. He knew some people would love it while others hated it. He pretty much nailed it.

As for myself, there were a couple things that annoyed me about Joyride but the cushion largely worked as intended. I’m a big guy at 6’6” and 210 pounds and I think that played a role in my experience. Like Moses parting the Red Sea, slipping my foot inside the Joyride Run and then standing up made the beads go where they were supposed to go. They did move slightly while I ran. This largely wasn’t a problem except for a couple times where it felt like a bead was above all the others on the side of my heel. In those cases it felt like a small rock annoying my foot. A quick shake of my foot usually got rid of it. I also occasionally felt the area where the foam sidewalls were bonded to the upper pressing into the edge of my forefoot. A quick foot reposition always solved the issue.

In one run, I ran 6.75 medium-paced miles in the Joyride Run and my legs felt great afterwards. However, I wouldn’t speed train in the Joyride as I didn’t get much energy return on push off. A lot of the energy dissipates into the moving beads. That’s fine for recovery runs and casual wear but not when you’re looking to hit specific times on 400 meter intervals.

Jodi: I’m actually impressed with the traction. That was my one nitpick when originally seeing the shoe. How is that traction going to hold up to 300 miles? Let alone the 450+ miles one article claimed. But now, looking at the wear and tear on the rubber outsole, if I gave the shoe a good cleaning you’d barely be able to tell they’ve been used. That is, if you ignore the foam cushion. SR02 is Nike’s softest available cushion. It’s even softer than React. And on the lateral side of the shoe they have a beautiful jeweled Nike swoosh that has shredded the foam thanks to being constantly mashed into the ground by my footsteps. But all things considered, the traction has been very reliable and durable.

Drew: Like Jodi, I was skeptical of the traction pattern’s durability. But Nike used some really hard rubber and it’s holding up extremely well. It should last for the typical 300+ miles we expect from running shoes. With harder rubbers, traction in wet conditions can really suffer. That didn’t happen for me with the Joyride Run Flyknit. It still had a nice grip even when wet.

Jodi: The support comes from the outer heel cage that wraps up and around your ankle to then become your top lace loops. You also sit down inside of the foam cushion. The system works together to enable solid lockdown.

Drew: As Jodi said, the foam wrapping up around the heel and the heel cage itself give you great heel lockdown. I was initially worried about the support (with a bunch of free flowing beads underneath my feet), but Nike did a great job of building the support around the Joyride cushion. The foam side walls and the Joyride’s plastic heel carrier extend high enough where your heel will stay on the footbed even when running on uneven ground.

Jodi: The upper is a very form fitting flyknit bootie. My favorite part of the shoe would have to be the pull tab combined with the stretchy tongue. If it weren’t for those two I wouldn’t be able to get the shoes on.

Drew: The shoe is a cool looking mix of Flyknit and a neoprene bootie. The look and colors are similar to the Nike React Presto Breezy. The neoprene is (welcomely) perforated to allow some airflow on the medial side of the foot. There’s also some fuse reinforcing the lace loops at the big toe area of each shoe. The fuse at the big toe is more of a design feature but it adds variety to the forefoot’s all Flyknit look.

Jodi: The Nike Joyride Run Flyknit is a tight squeeze at first. But everything did stretch in the right places, even for a wide footer like me. Nike sent me a size 7 even though I typically run in a size 6.5. After putting them on I realized they did it on purpose knowing the shoes fit a bit small. If you can’t get into a store to try them on, err on the side of caution and go up half a size.

Drew: Though the Joyride Run Flyknit is a tight fit, there are no pressure points and it stretches nicely. For comparison purposes, it’s not as tight as the Jordan React Havoc and the Flyknit has a bit more stretch than the React Havoc’s more traditional stretchy mesh. Nike sent me my correct size of 11.5 and I ended up with under a thumbnail of space lengthwise. If you have a narrow foot like me you can get away going true to size, however, I think the majority of people will prefer going up half a size.

Jodi: If you asked me to Marie Kondo my shoe closet, the Joyride Run would go in the donation pile. It doesn’t bring me joy the way the name implies. I consider myself a veteran runner. I’ve been running about five days a week for over a decade. After runs in the Joyride Run I didn’t feel fresh. Instead, I found myself feeling super slow and heavy. The 10,000+ beads didn’t propel me forward in the same way the Nike Zoom Pegasus Turbo 2 does. And with both shoes costing $180, I’d have to recommend the Pegasus Turbo 2 over the Joyride Run Flyknit.

Drew: The Nike Joyride Run Flyknit will not be for everyone, especially at its $180 price point. Most serious runners will prefer a shoe with more energy return and most beginners shouldn’t be spending $180 on running shoes. The Joyride Run Flyknit is a recovery run tool for experienced runners and a fun technology that will excel in the casual world while being used for occasional runs by weekend warriors. If you get the chance, try them on. Joyride doesn’t feel like any other cushioning technology and you need to decide for yourself whether you love or hate the way it molds to your foot. This is one of those shoes that will polarize the sneaker community, so go try it out for yourself and form your own opinion. Nike is going to make successful lifestyle sneakers using Joyride so it’s a cushion that will be around creating conversation for the foreseeable future.