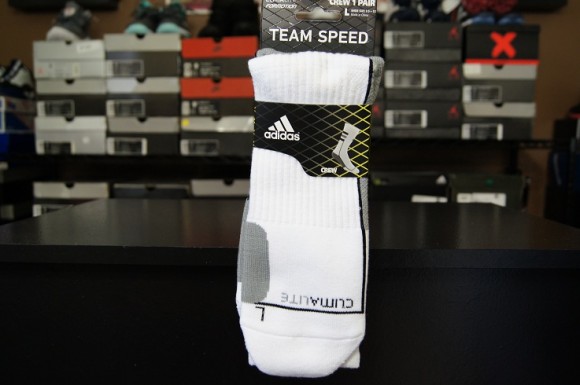 Most of you seemed to have liked the review on the Nike Elite Crew Sock which has led to numerous requests for the adidas Team Speed Crew Sock’s review. Initially I had no intention on reviewing these but with so many being interested in them it’s hard to resist.

The adidas Team Speed Crew features a ribbed leg for compression which extends down to the midfoot and arch… much like the Nike Elite. ForMotion is what they have labeled for the anatomically designed footbed shape said to enhance the foot’s natural movement. Instead of Dri-Fit, there is ClimaLite… basically it wicks away moisture. Additional cushion is in place along the footbed as well, located in the forefoot and heel.

My first impression… they fit and feel just like the Nike Elite with a little less cushion. Cushion isn’t a huge deal seeing as how the cushion in the Elite wears down eventually so in that sense… they feel the same.