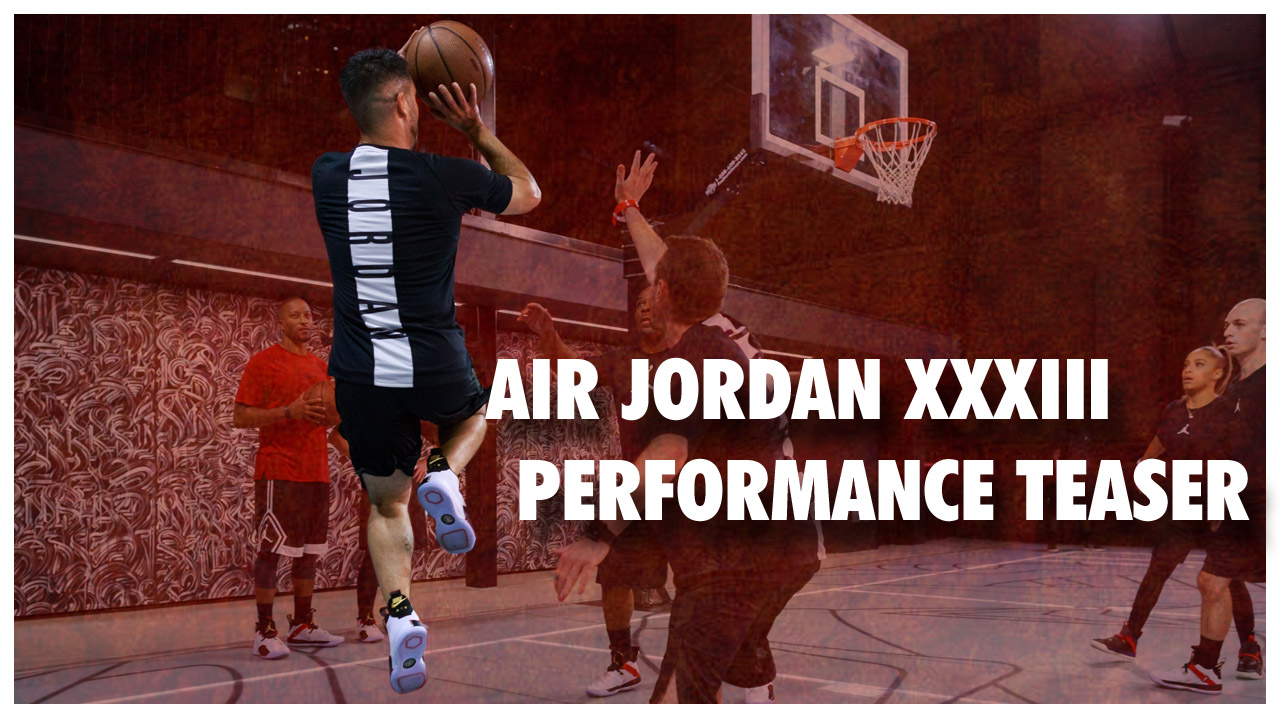 An Air Jordan 33 performance teaser? I haven’t done one of these segments since 2014. 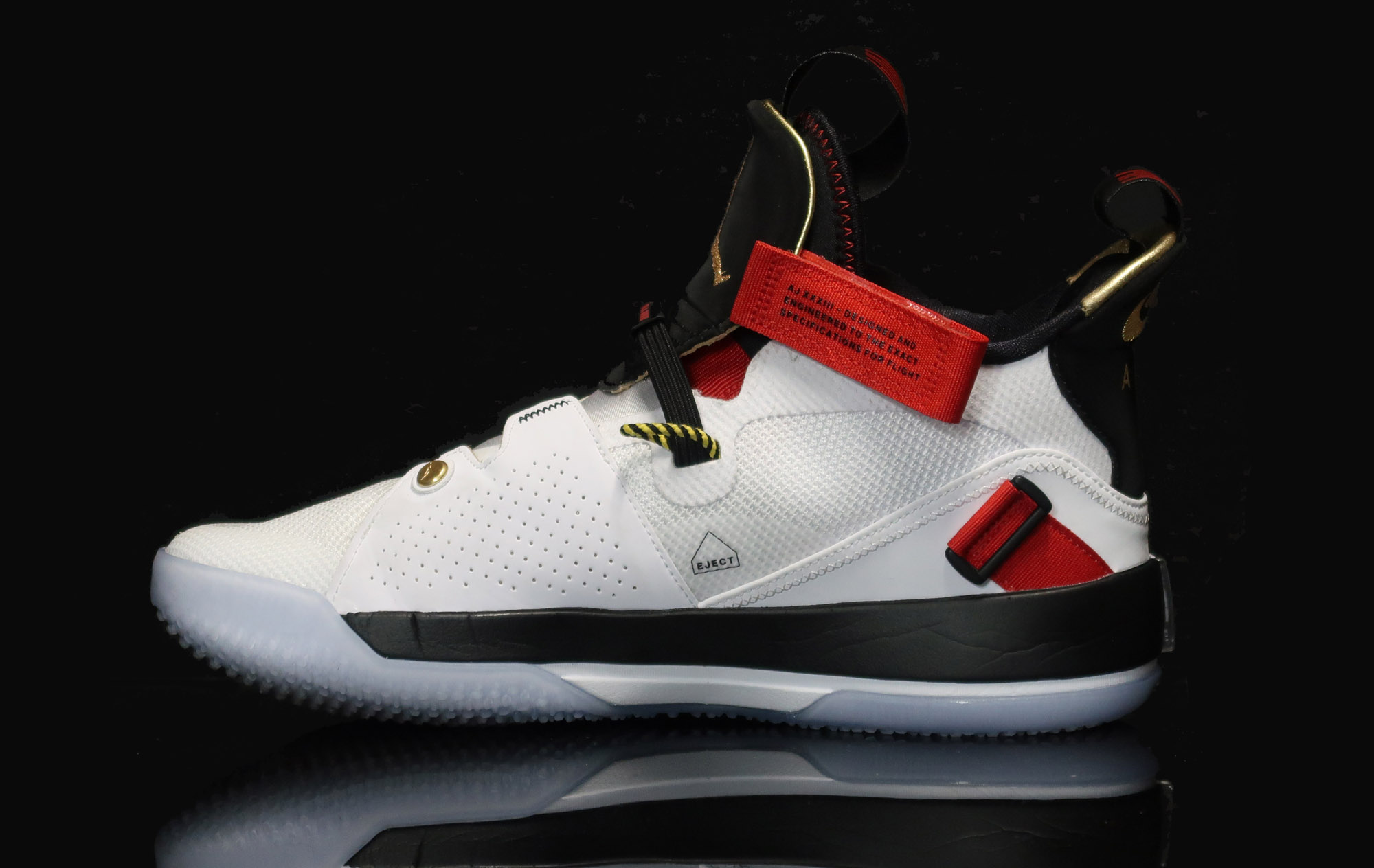 The latest Jordan Brand game shoe, the Air Jordan 33, has been an interesting sneaker to play in thus far. Not in a bad way, but there is definitely room for user error. For those that follow me on Instagram, you’re likely aware that I had a major blister on my arch appear while testing the Air Jordan 33, and initially, I thought it was the shoe’s fault.

Internet “experts” immediately pointed to my arch or socks as the culprits, but it was neither of the two. It’s always funny when you see people weigh in on what’s going on with something when they aren’t the ones that experienced a single thing — but I digress.

When I received my pair of the Air Jordan 33 I was told that the forefoot was tightened up by the parachute cord and FastFit system while the rear of the shoe was tightened by the red strap — at least its red on my pair. Both of these things are true.

While playing this past weekend everything was feeling great. From the traction up to the fit, I was loving the shoe and then some pain started to become a factor. I’ve had this pain many times before, most recently with the Under Armour Curry 5, and knew what was about to happen. I tried loosening the rear strap because that was the area where I began to feel the chaffing against my arch and, to my surprise, it just got worse.

Initially, I assumed the chaffing occurred due to the internal tongue sleeve. There is exposed stitching and it runs into the arch under the insole within the shoe. Boom. Problem solved. Right? Not exactly. 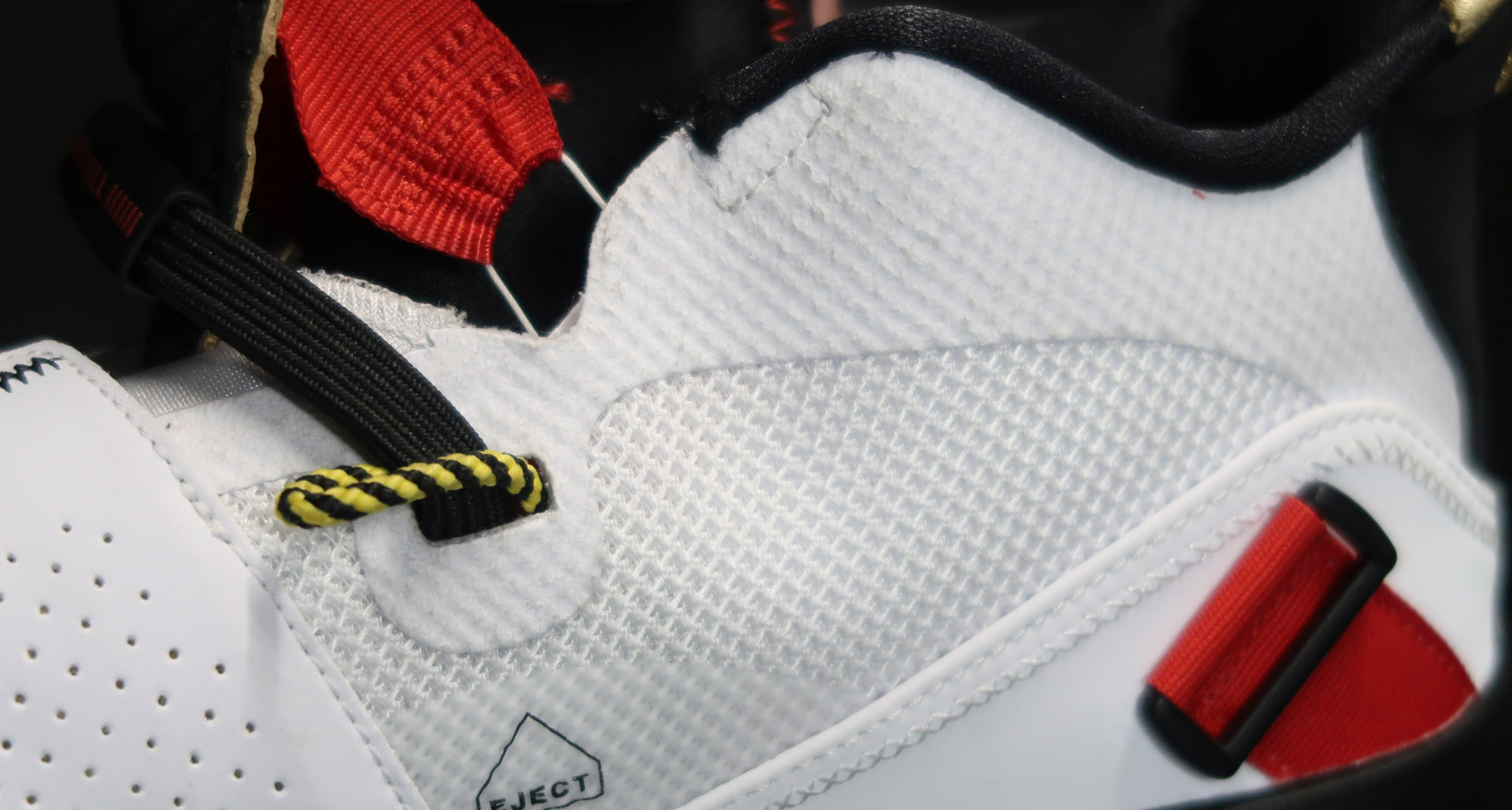 Upon further inspection I discovered that the rear strap was actually tied directly to the forefoot’s FastFit system. More importantly, there are parachute cables attached to the medial side of it where it feeds into the interior of the shoe. Two cable strands make their way across my arch and into the footbed of the shoe where it then feeds into the visible system installed under the arch of the shoe. 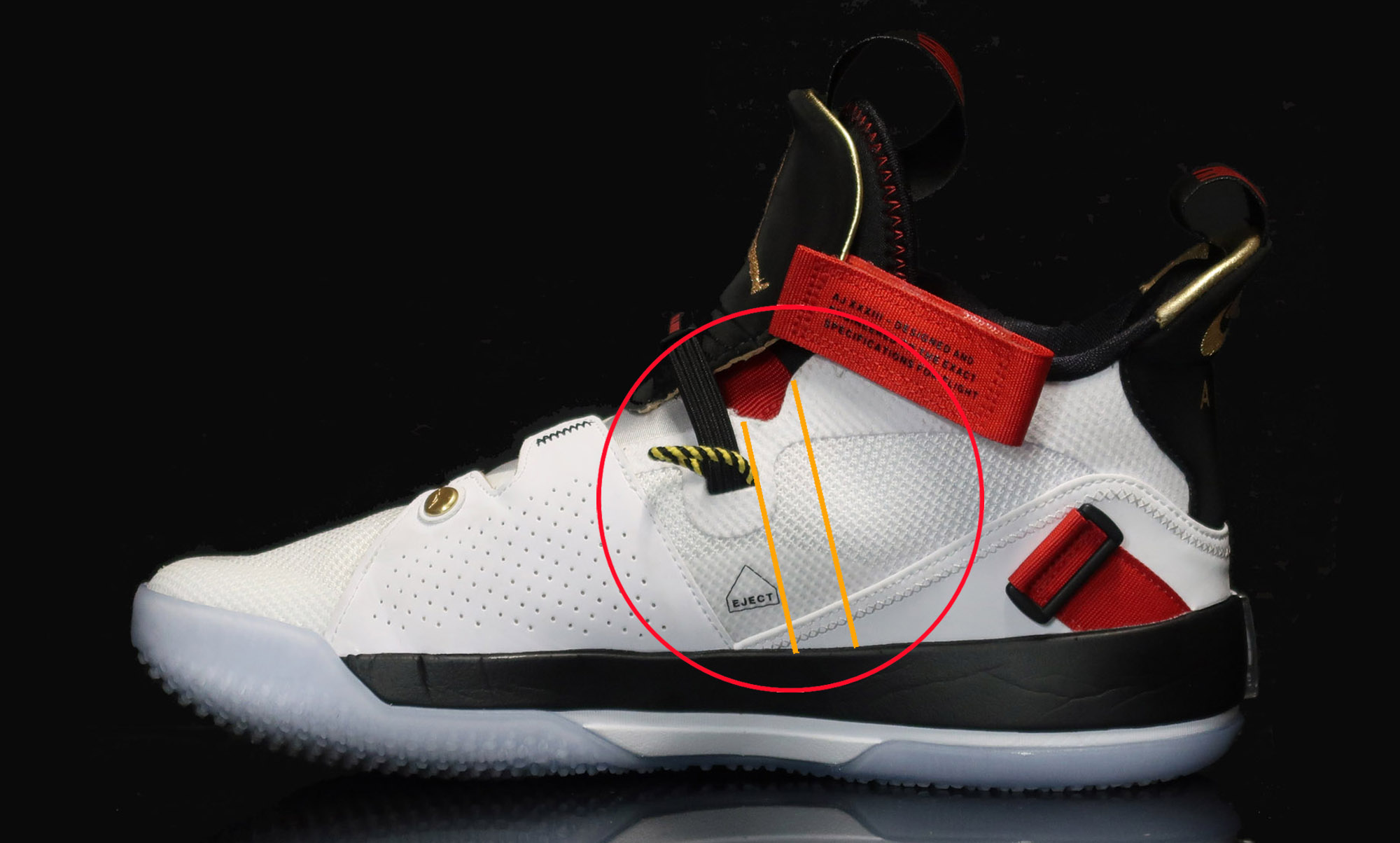 Those two tiny little cables are the reason why I chaffed my arch so badly. I was loosening the wrong section of the shoe because I originally thought the two areas were not connected when they actually are. 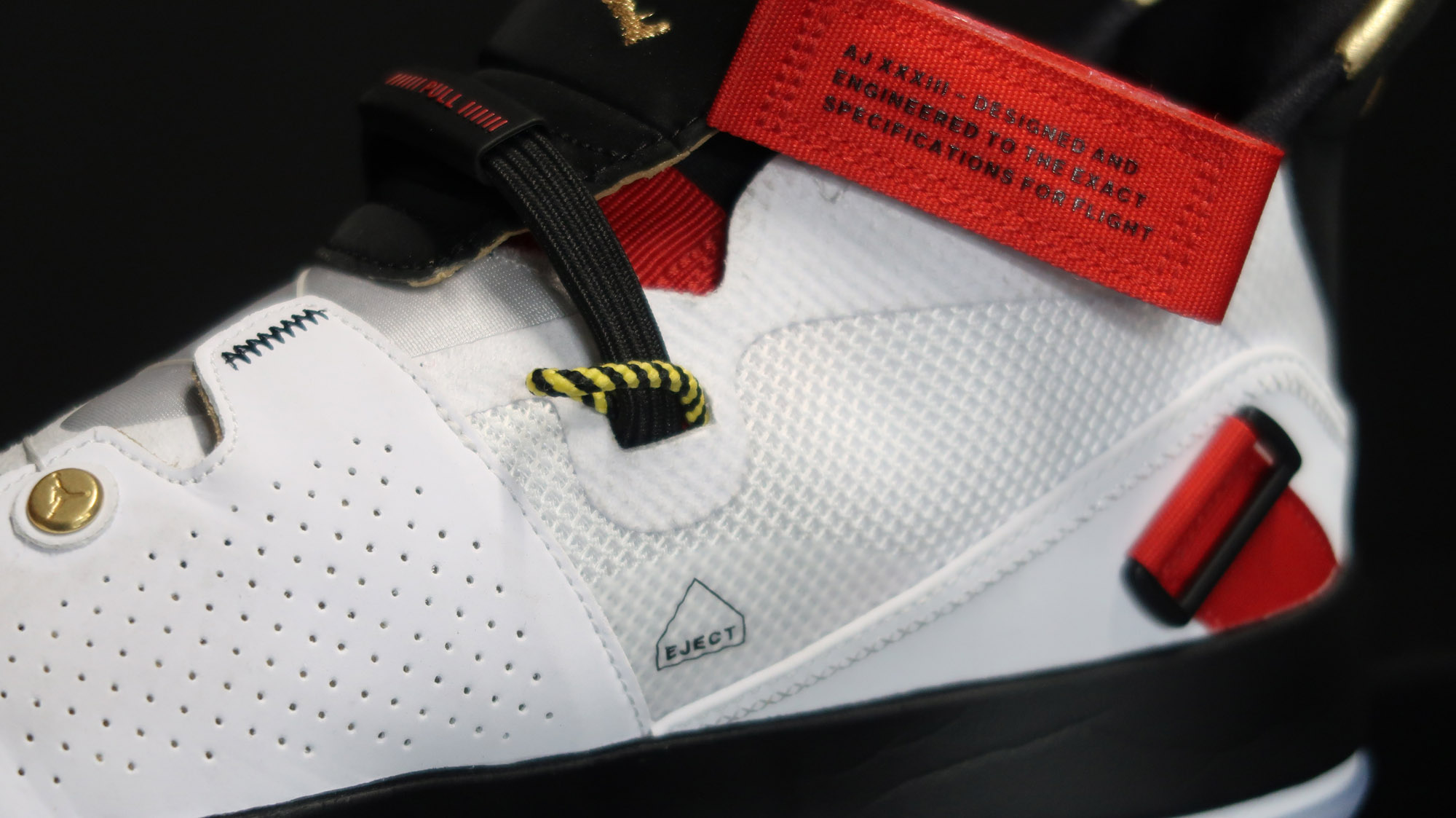 Had I pulled the little eject cord to loosen the cords a bit my problem would have been solved and I wouldn’t have an awesome open wound on my foot. However, I was unaware and now we’re here.

While the fuse panel in the Curry 5 is located in an area that isn’t ideal and the only thing you can do to remedy the pain it will likely inflict is by going up 1/2 size, double socking, taping, or by wearing a brace, the issue with that shoe was design flaw within the interior of the sneaker. With the Air Jordan 33, I definitely think there could have been a better way to ensure those cables weren’t in that exact location, but I think educating the wearer is where we can really avoid any potential issues. 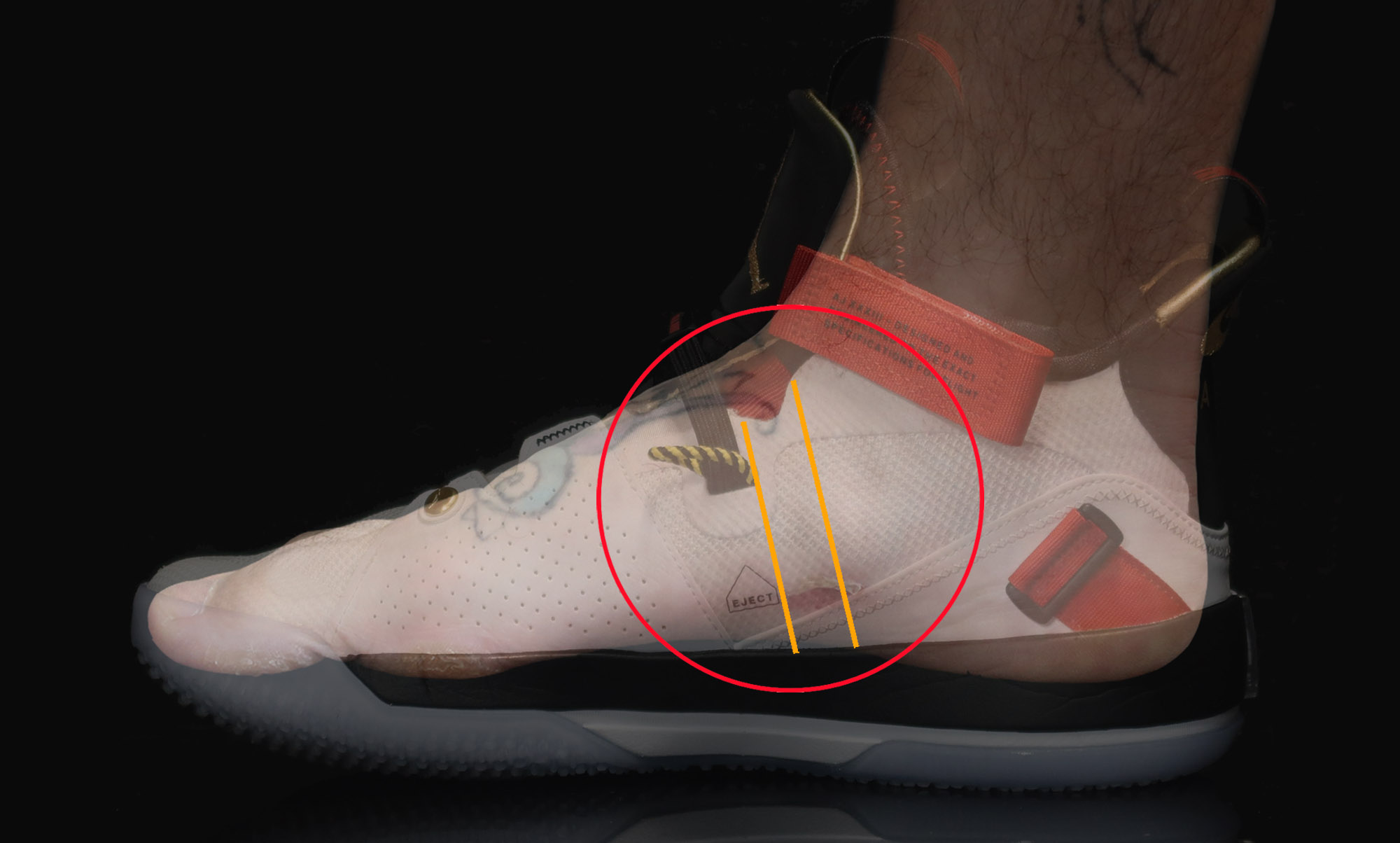 I like the forefoot of my shoes to be tight. With the Air Jordan 33 you can’t really adjust each section of the lace like you’re able to on any other shoe because it’s all one cohesive piece. Some may consider this to be a flaw — if that’s you then that’s cool. However, I now know that it’s all connected when I originally thought the forefoot and rear were two separate pieces, thus I can now adjust the “laces” that make up the FastFit system accordingly. Lesson learned, the hard way.

Again, I’m loving everything on the shoe so far. Cushion is solid. A bit stiff to start, like the Air Jordan 32, but solid overall. Traction is slightly better than the 32 — much like traction on the 32 was slightly better than what was used on the 31. Materials are comfortable, light, and breathable, and they haven’t shown any signs of wear just yet other than being a little dirty.

It was the FastFit system that I’ve been really trying to adjust to and now I know not to tighten the shoes up quite to the extent that I had. I also know now that when my foot swells during my time on-court I need to use the eject cord to quickly loosen the lace system so I can readjust it to my feet as needed.

I’m glad I figured out what I was experiencing in the Air Jordan 33 because I’m now able to enjoy the shoe once again and complete testing it for the full performance review. The shoe has definitely left its mark (on my body) like so many shoes before it (I’ve got scars from Curry 4, Curry 5, Soldier 10, LeBron 9, Kobe 7 System — the list goes on).