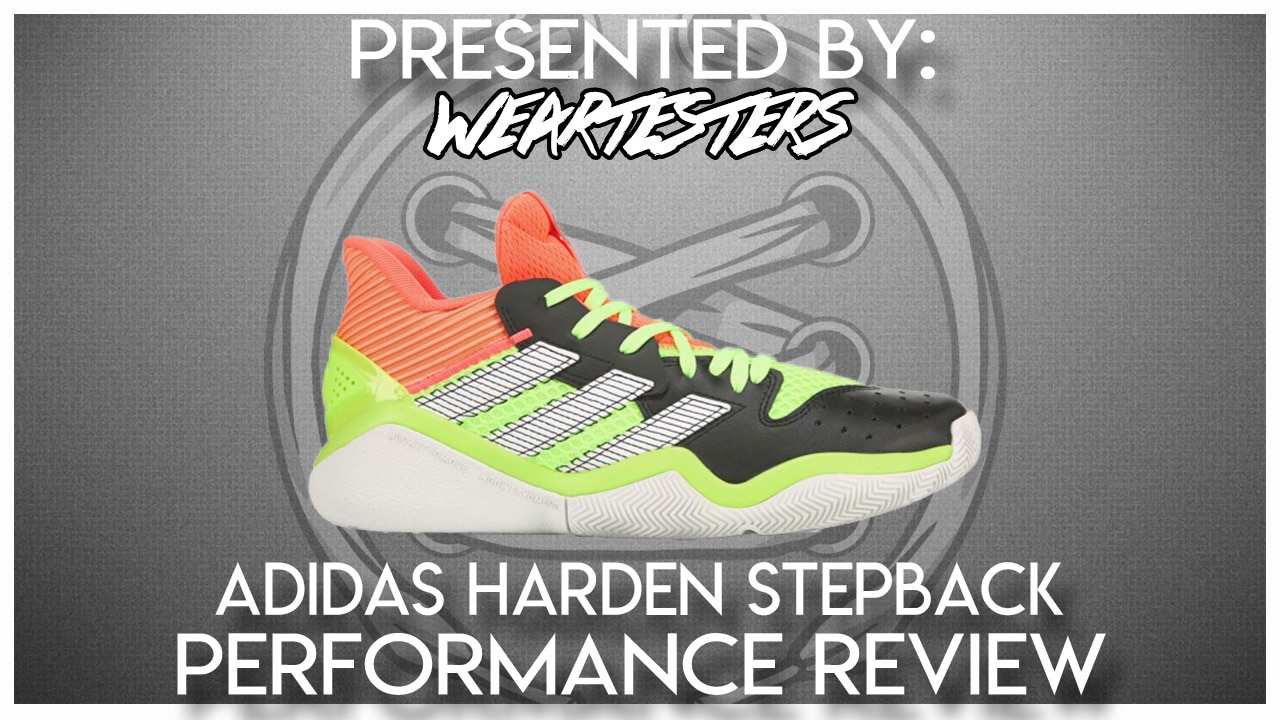 Today, we take a dive into the sub $100 category with a performance review of this year’s adidas James Harden takedown model — the adidas Harden Stepback.

We start with Harden Vol. 3 style herringbone in the forefoot and a Vol. 4 style pattern at the heel section. I’d like to call this setup “business in the front, party in the back”, but the herringbone didn’t quite take care of business the way I would have liked.

The adidas Harden Stepback does have some bite to it. However, it’s not always immediately present and packs dust up in those tight herringbone grooves a little too easily. I didn’t really notice any issues with the heel section, but for the forefoot, expect to wipe quite a bit if you want to maintain some level of consistency while playing.

It seems for the Stepback’s traction to perform optimally, either the outsole or the floor needs to be in pristine condition – which is rare for the average consumer. On the plus side, I’ll give the Harden Stepback traction some credit for durability as there are hardly any signs of fraying over a month of ownership and testing. This would make these a solid option for those that play primarily outdoors — which is what the Stepback feels like they were intended for in the first place.

For well under $100 you get full-length Bounce in the Harden Stepback — but it doesn’t quite feel like the Bounce you may expect. Like the Harden Vol. 4’s thin implementation of Lightstrike, the Bounce feels just as thin and low to the ground, which some may like, others may not.

This firmer minimal setup may be a good thing for some as you get a ton of court feel without feeling like you’re busting directly through the soles and into the playing surface. But, there just isn’t going to be enough impact protection or rebound for some to feel comfortable in the shoe.

Cushion is subjective, but I think it’s safe to say this will not be a great choice for everyone, and it certainly isn’t the best representation of Bounce for anyone that may be trying the foam for the first time.

For those familiar with the Stepback’s flagship counterpart, you’ll notice the same mesh base used on the Stepback is used on select colorways of the Vol. 4. The difference is a heavier use of synthetics in high wear areas such as the toebox and eyelet panels.

My main concern with materials doesn’t come from the synthetic overlays – its more of the interior construction. Materials aren’t all that well lined or stitched down so I experienced a lot of bunching up internally which caused discomfort around the midfoot while testing. Also, the lacing setup leaves parts of the laces exposed against the forefoot, which took some time to adjust to and prevented me from comfortably sizing down. Props to adidas for including even a minimal amount of sculpting inside around the ankle, though.

What feels like a thin-vinyl covers most of the toe area – I found it to be a good touch as it wasn’t stiff or crinkly at all – just maybe a little bubbly. Minus a thin tongue that lace pressure will cut right through if you aren’t careful – the rest of the uppers textiles, plastics, and synthetic leather do their job well enough.

As hinted previously, I could’ve probably gone down half a size if I wasn’t in fear of a painful break in. Going true to size may not have been optimal, but it was good enough to never be a security concern. The fit reminds me of the Marquee Boost a bit – narrow through the midfoot but widened out more in the toebox. The difference between the two is that there is breathing room above the toe in the Stepback, where the Marquee wrapped closely over the toe.

I’d advise anyone who has the means to – try these on before purchase, no matter your foot type. At retailers like Academy Sports or Dick’s Sporting Goods, luck should be in your favor to walk-in, grab a box, and get a good feel for how they fit you.

Individually, most support features may seem underwhelming, but together they work decently.

The external heel cup isn’t the strongest, however with the help of lacing through the top eyelets there was no issue with slippage in that area. It is also sculpted, though not immaculately so around the ankle, so there’s that.

A thin, Z-shaped bar at the midfoot provides torsional support and lateral support is aided by a midsole and outsole that cup the foot heavily around certain areas. Support should always be a focus for a basketball sneaker, but I must admit I was surprised to see the amount of focus that went in to an $80 pair of sneakers.

A cut in cost takes away from getting some serious performance out of the Harden Stepback. Overall, it is what some might expect, and maybe even a little more.

If you prefer minimal cushion and would like to support Harden without spending $140 then this is a proper takedown of the adidas Harden Vol. 4. However, if we are basing things off of performance rather than price, then the traction could have [should have] been better, but will suffice for outdoor hoopers looking to stay within a budget while still satisfying the desire to wear the latest and greatest.