What took so long? The Project Rock has been out for months? Well, with the blue/red/white pair being fairly limited (and we did get a pair but they were too big to properly review), we decided to wait on a pair that was more widely available – and that fit. We all know The Rock is a beast in the gym and on screen, but how does the Project Rock stack up? It doesn’t matter how the Project Rock stacks up. Smell that?

We have seen this pattern before, and for weight rooms and grass/turf/field work, the pattern is great. Small nubs cover the sole and give great “dig in” traction on football situations – rope running, cutting, sprints, even games on shorter turf – but for thicker grass and wet conditions you will want to go with a normal cleated pattern. In the weight room, the pattern is fine, giving grip on the rubber mats under the heavy stations like deadlifts, squats, and cleans.

Court-work is actually not bad. Nike has used nubs similar to this before (Nike Zoom 2K3 and Zoom Flight Five) and those shoes had great traction. The Rock worked fine on lateral movements and running up and down, which was shocking, but a little dust had me sliding across the floor. Durability is the only concern – after just a couple of weeks the ends of the nubs were worn off, and even though the nubs are deep, once they are flattened you lose a serious amount of grip.

MICRO G!!!! Nope, not the old-school Micro G of the original basketball line, but it’s not bad. A training shoe doesn’t need a ton of cushioning, especially foam, soft, unstable cushioning. The Rock is solid, not a lot of compression, but the midsole has just enough give to be comfortable in all activities while still absorbing impact. The Micro G is housed in a TPU midsole cage which keeps it from compressing on the edges – very important when you are under a squat rack with 405 pounds on your shoulders. The slightest instability and you are dropping that bar, risking injury and embarrassment and a seriously loud noise. The caging gives you great cushioning feel while still keeping you safe.

The forefoot isn’t as locked up as the heel and rides lower, keeping you in close contact with the ground. The cushioning has a little more bounce in the forefoot and when landing and popping back up on moves like box jumps and ropes the quick reaction from the midsole is very necessary – again, with very little impact issues.

The Rock uses a fully knit upper with strategic fuse/synthetic overlays all around the midfoot and toe box. The knit keeps the shoe light and comfortable, as well as flexible straight out of the box, while the overlays add the lateral support and help with stability and lockdown. The knit around the collar is stretchy and allows for an easy entry into the shoe, something one-piece uppers sometimes have a problem with. Ventilation is not an issue, even with all of the overlays, because there are numerous vent holes throughout the upper and the areas under the laces and the toe box are straight knit – you can feel the air in these areas. That means the tongue area is not padded at all, so there is some lace pressure over the top of the foot when laced tightly, but you won’t want to do that anyway – more about that next in…

Sloppy, straight up. I originally tried an 11, knowing I am normally a 10.5, but that was what I could get. WAY too big, hence no review. For this colorway I got a size 10.5, and honestly, I could have went down to a 10 – so, on my third pair, I did. There is serious empty space over the toes in my true to size and lacing up tight to try to pull the shoe around my foot did help, but the material across the toe box is just too elastic, giving no containment at all. On lateral movements, especially if you are a heavy forefoot striker, you will not feel locked in at all in your true size, unless you are an extremely wide footer. By going down a half size, the upper was perfect – I could feel the forefoot straps tying me into the upper and lateral containment, while not on a basketball-shoe level, was vastly improved. Going down did mean my toes were closer to the end of the shoe than I like, but the knit material UA used allows for some stretching and no jamming of my toes.

Fit through the midfoot and heel is almost second skin. The ankle collar, much like the Curry 4, is just a knit sock, but it works with the heel counter and lacing to pull your foot into the midsole and lock you in. There is some light lace pressure across the last lace hole when laced tight, but luckily you don’t have to pull completely to get a great locked-down fit. The laces are set wide so the fit can be adjusted as needed.

Again, going down a half size made me re-write this whole section. The base is wide and solid, which helps greatly, as long as you are doing explosive, lifting moves in a weight room situation. The midsole being solid and giving minimal compression really solidifies your feel under foot. However, the foot sits on top of the midsole, not in the midsole. This means on any lateral movement the foot is only fighting the materials that, again, are extremely elastic. However, the overlays around the middle of the upper, coupled with the lacing system now fitting my foot, really did a fantastic job of keeping my foot over the shoe on all but the hardest of cuts (rope drills were not an issue; trying to do dribble drills on court were).

If you are looking for an evolution of a wrestling shoe, or the Chuck Taylor (which a TON of guys wear in the gym) then the Rock is probably for you. The sole is stable, with solid midsole cushioning and a wide base. If you keep it at a weight-banging, power shoe, you are good – the Rock 1 is built for anything you will find using plates and bars. If you are looking for a shoe you can do some running in, you may want to keep looking – the midsole has almost no compression for running and is not exactly flexible.

Normally, I don’t say much in performance reviews about aesthetics – we leave that to the First Impressions. However, I have to say, the Rock is one of the best looking shoes I have worn this year. Simple, clean, streamlined, and the colors have been easy to coordinate – especially with the killer line of clothing Under Armour has dropped for the Project:Rock.

Seriously – just like “Be Like Mike” was a motto of 80’s and 90’s MJ fans, guys who felt that they played more like Mike if they wore his shoes, the Project Rock makes me feel like I work harder in the gym when I wear them. You don’t want to let the Rock down by going weak in his shoes. It’s dumb marketing, I know, but it works – it inspires. The shoes just have a “cool” factor and you can’t deny that.  If we could just get the sizing locked in, this shoe would be Rockin… yeah, I said it. 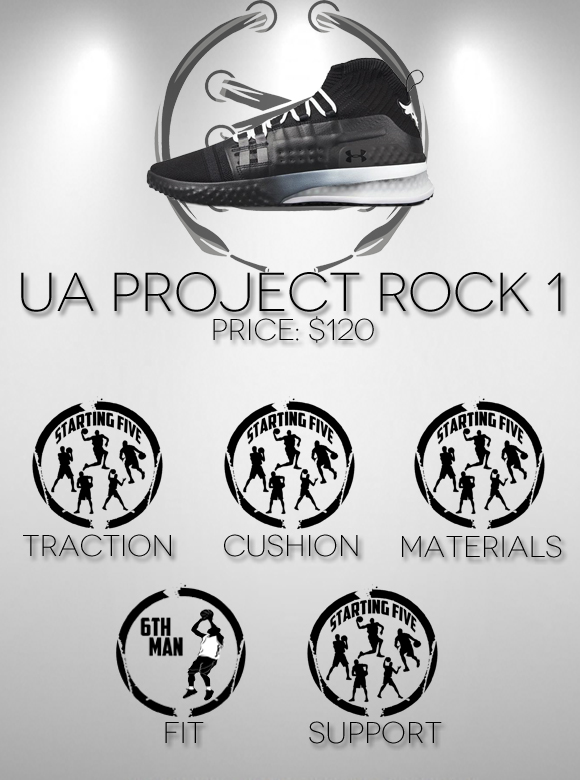