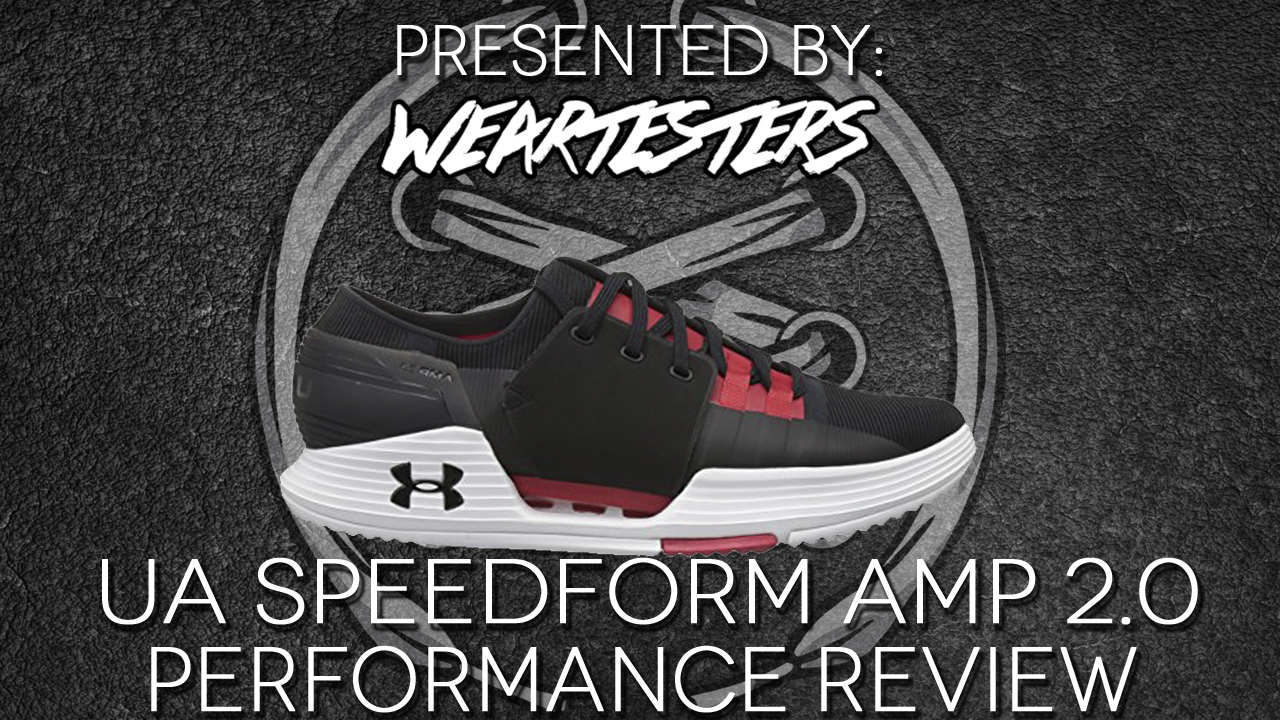 Under Armour has long been known for making great training apparel and footwear. Can the Speedform Amp 2.0 continue the roll? Read on… 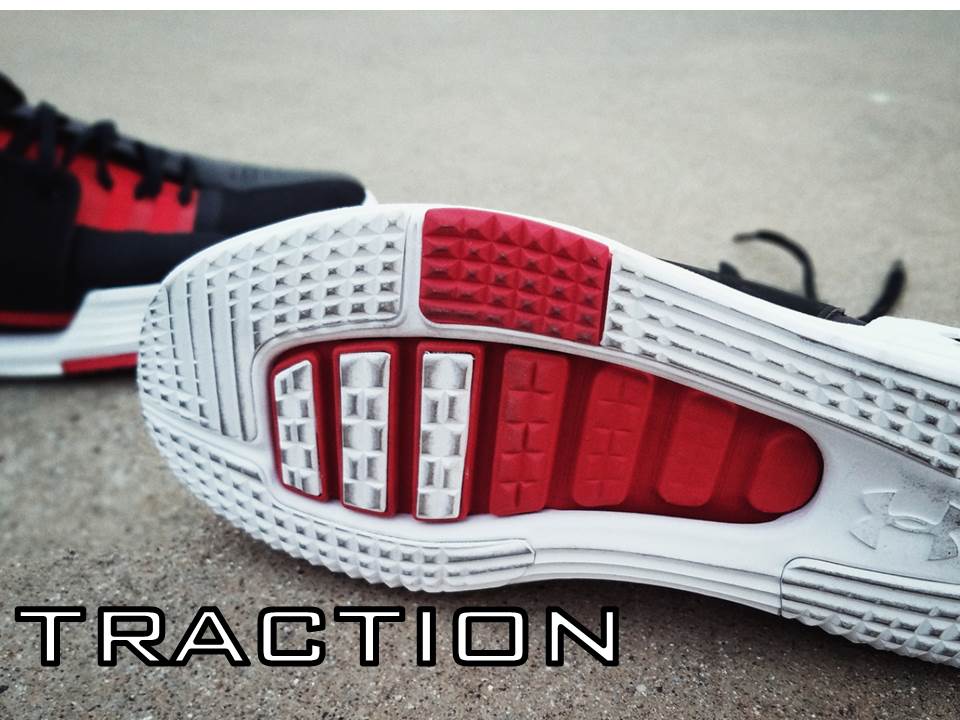 That traction — it looks like a turf shoe but feels right at home in the weight room under a squat bar or hitting some jump ropes/box jumps. Anyone who has done any type of cross training knows when you are under the squat rack or leg press, you need the confidence to push with no fear of slipping, and the Amp 2.0 was solid.

Moving outside, the pattern was able to dig slightly in to grass or turf for running, but on quick lateral movements the “spikes” weren’t long enough to really grip deep grass, especially when a little moisture was present. As for court games, the Speedform Amp is not solid. The traction pattern is fine in a front-to-back movement, but laterally it needs a little help.

Durability? So far, so good. The points on the spikes have worn and slightly flattened, but there is more than enough pattern left to keep using these and feel comfortable working out. The red areas are the cushioning foam from the midsole, and it is softer than the white rubber, but those red points rarely make ground contact. 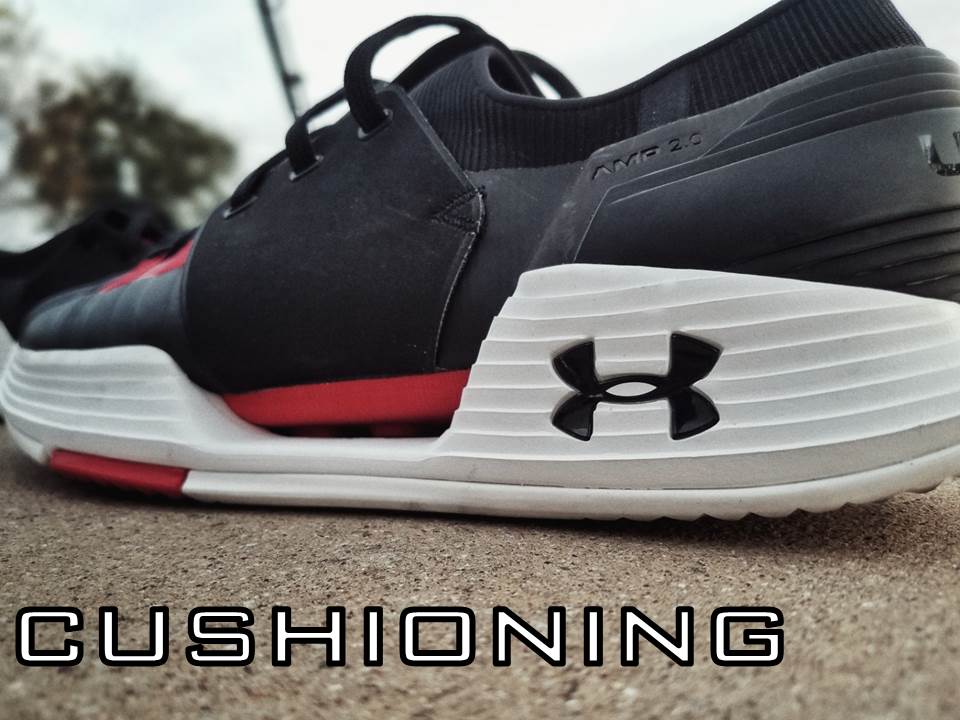 There isn’t much cushioning — which is good for heavy lifting and stability. If you plan on doing a lot of distance running, not so good, but these aren’t running shoes.

The midsole is a really thin layer of EVA, no Charged or Micro G, so it is built for explosive, quick movements. For lifting, the low ride of the midsole and the firm foam keep any ankle rolls or tipping to a minimum, which is extremely welcome when you have heavy weights up.

One thing that is important: the window under the midfoot does nothing for cushioning. It never even touches the ground in that area, so the red EVA foam found there is more to stabilize than cushion. That cutout does help with transition and flexibility, allowing the arch to move freely, while still being stiff enough to support the arch, but stability comes later.

To sum up, this cushioning is good for lifting and training but bad for running distances. 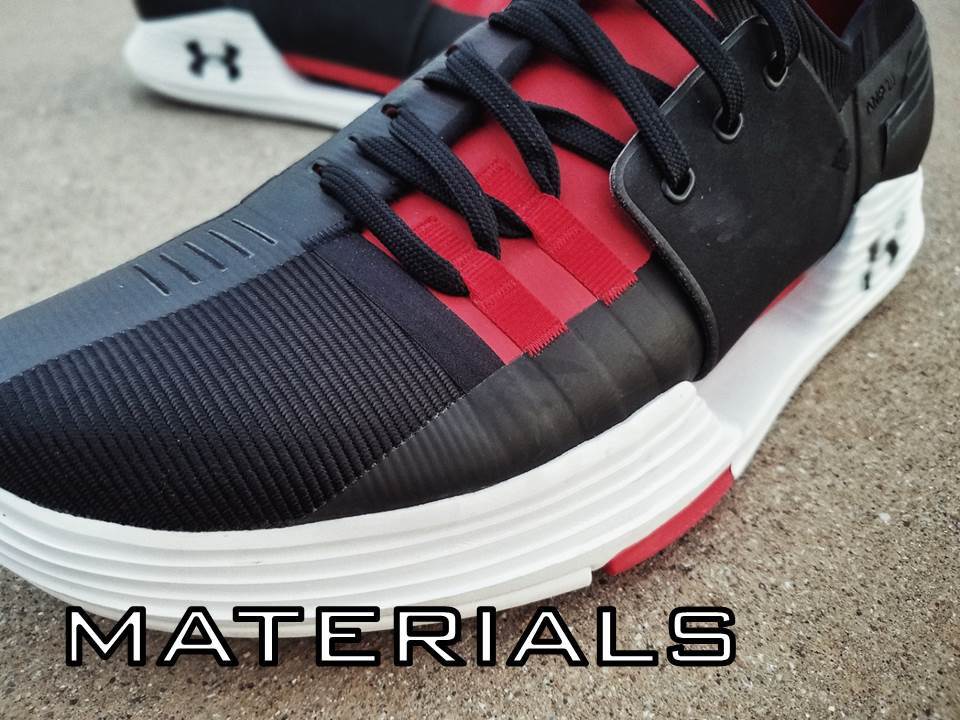 Tough call. Yes, the upper is woven, and the woven areas feel extremely nice and smooth (sometimes I rhyme slow), but most of the upper is covered in a synthetic, especially in the high-stress areas. This includes the strip over the big toe, the lateral forefoot, the midfoot saddle (there is woven under the synthetic saddle), and the lace holes. The tongue is also covered in red fuse.

It’s understandable to use fuse for strength and durability in some of these areas, but honestly, it defeats the purpose of the woven upper to cover it up. Ventilation suffers seriously because of the tongue and forefoot coverage, and the fit takes a good four to five wears to break in the fuse for it to start flexing with the foot.

The inside of the Amp 2.0 is classic SpeedForm with the insole and interior lining as all one piece. The heel padding is minimal but still enough to keep the area comfortable. Once the exterior is broken in, the interior fits like a glove and feels great on-foot. 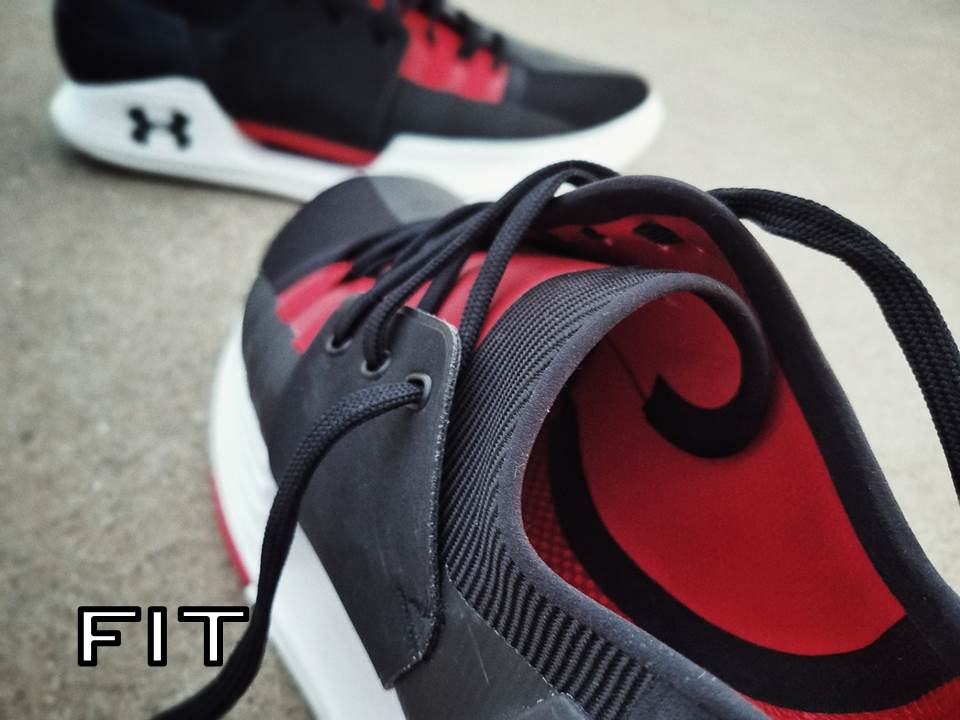 Fit is generous, but not bad. Going back to the upper materials, the SpeedForm Amp 2.0 starts out roomy in the forefoot and feels long, but sizing down would put your toes right at the end of the shoe, and that’s a no-go.

One of the reasons, actually, the main reason, goes back to the tongue. Under Armour gave the SpeedForm Amp 2.0 a burrito wrap system which works great — once broken in. See the pattern here? Be patient. Until it does, be prepared for the shoe to not tighten and lockdown, which can lead to heel slip. 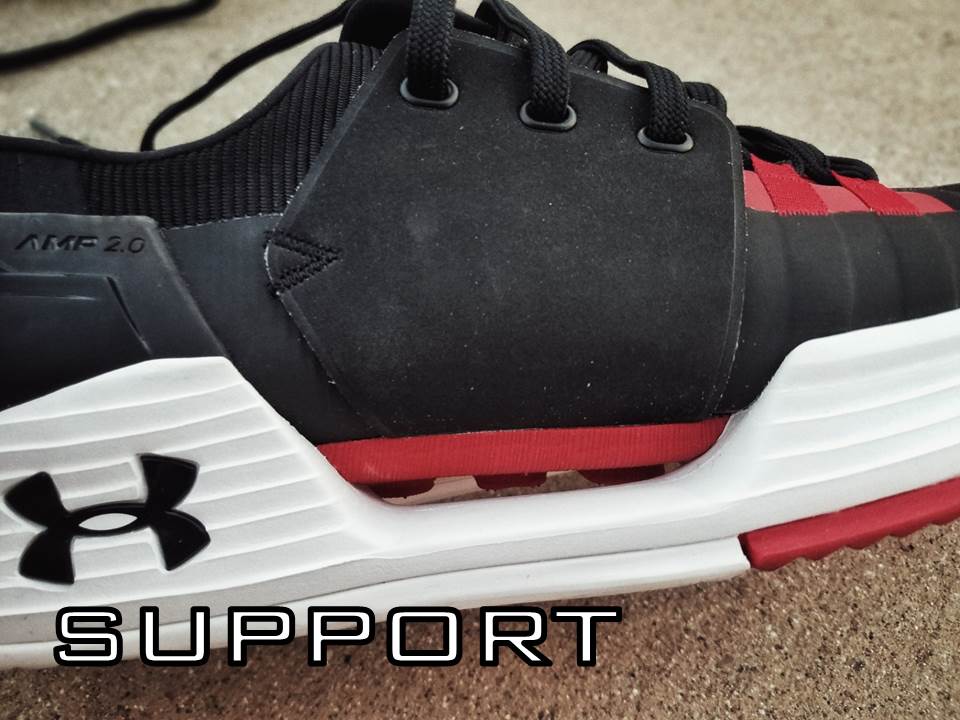 The super-wide base and solid cushioning make the SpeedForm Amp 2.0 a great choice for heavy Olympic-style lifts. The midsole under the forefoot sticks out about 3/4″ from the upper on the lateral side and the heel on both sides is about 1/2″ beyond the upper, meaning when those plates go up your shoes will keep you from wobbling. Your legs may give, but the Amp won’t.

The midfoot support piece is a little different in construction but works just as well. The midsole is cut out to provide transition and feel with dynamic movements, but inside that red foam is a serious shank plate that bends for nothing and no one. Even though that looks like the weak part of the shoe, it actually may be the strongest.

The midfoot saddle holds your foot over the shoe with no pinching or pain and works with the burrito tongue to eventually give you a locked-in fit, but again, be patient. 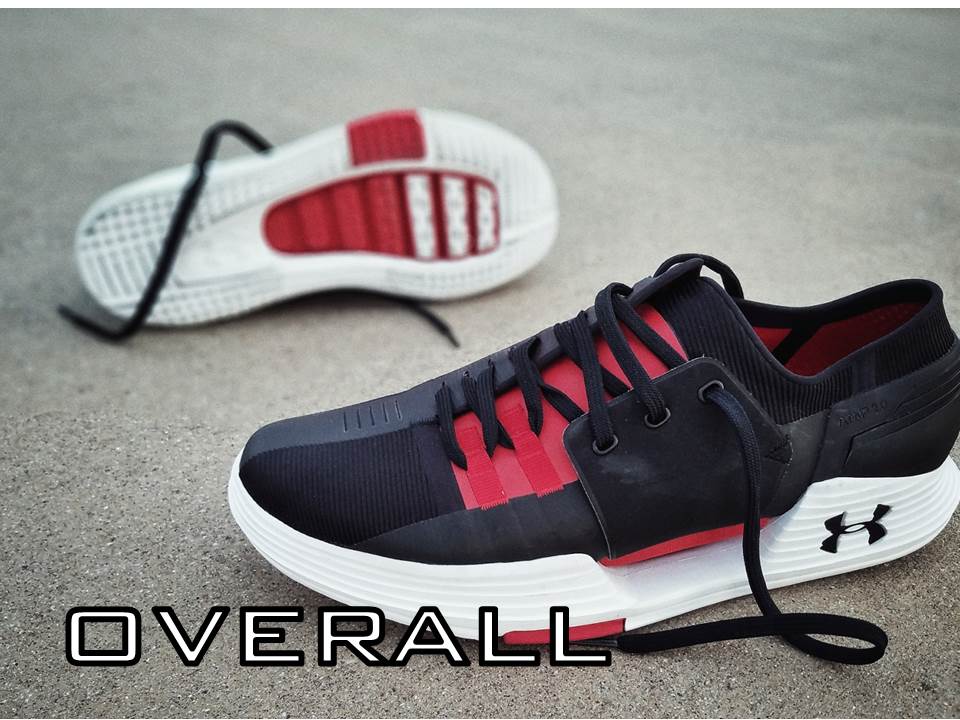 It’s crazy that I had never really given training shoes much thought until the last three years. Runners and lowtop basketball shoes always worked for me, and I wasn’t a novice in the gym or weight-room, but I just never saw the need. Now, with the advancement in workouts the equipment has followed bringing wider bases, stiffer cushioning, and all-terrain traction.

The Under Armour SpeedForm Amp 2.0 fits perfectly into the category, providing excellent stability and support in a lightweight, well-built package. Give the upper time to form and you will be rewarded with a good fit as well. However, if you need a shoe for running and court work, there are better options out there.

For anyone needing an all-around shoe for the gym or training, the SpeedForm Amp 2.0 will fit your groove. Get carving!!! 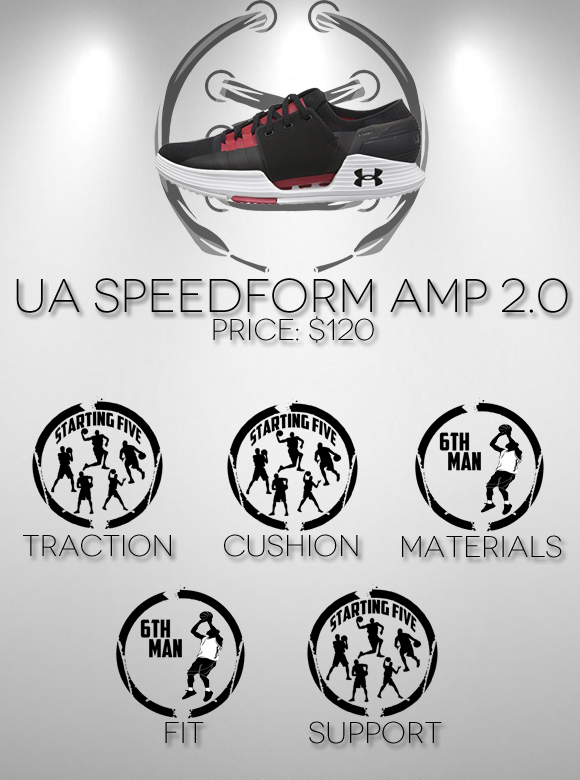