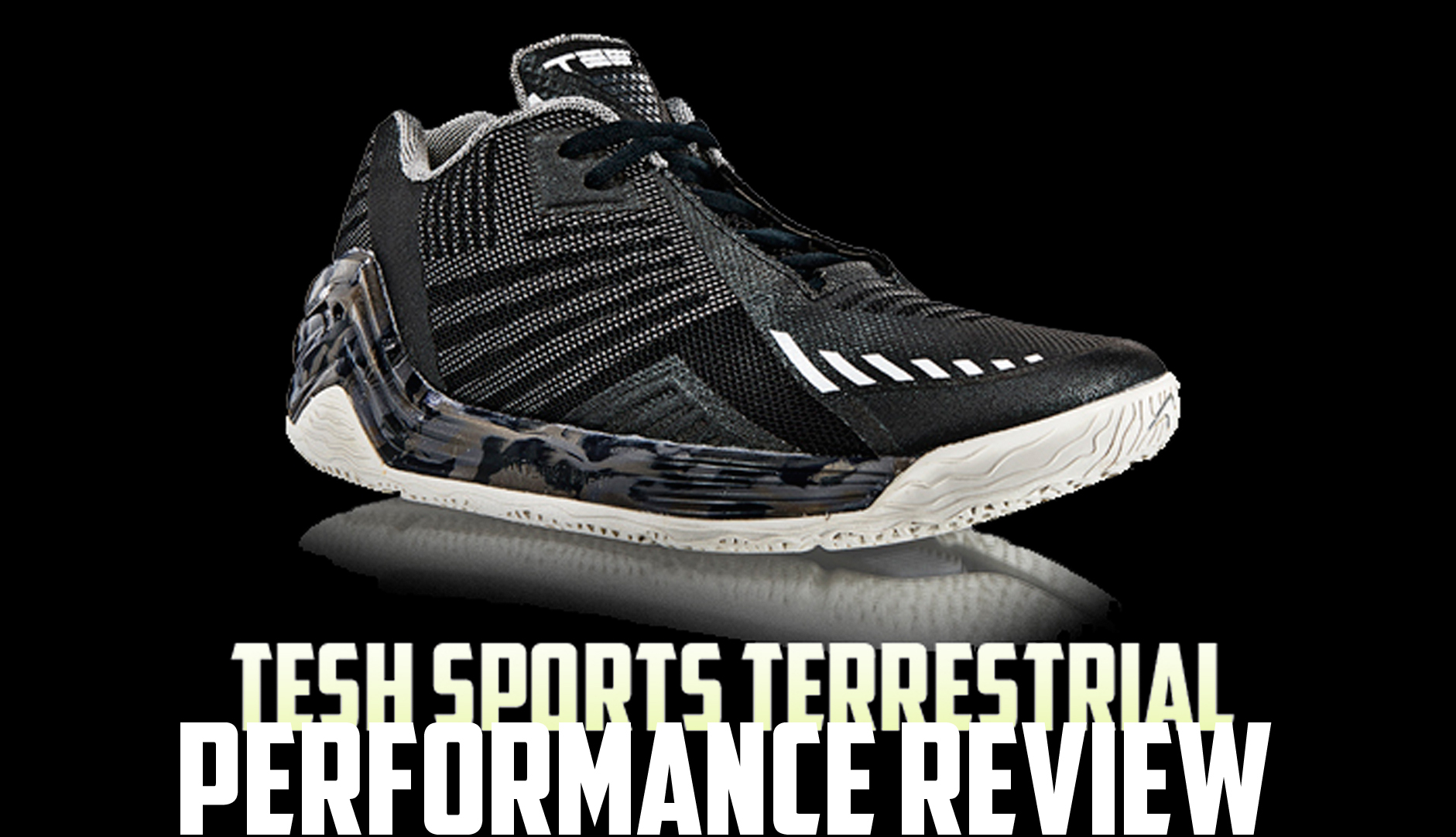 Something new this time around. Never a bad thing… 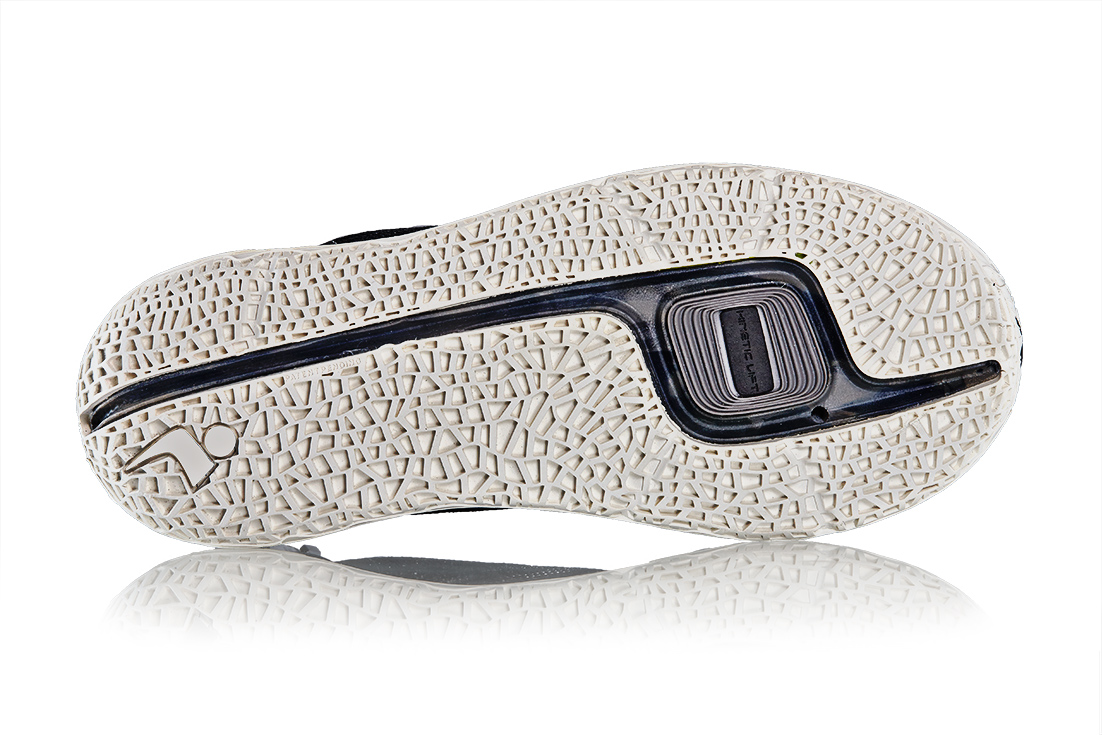 Traction – Not sure what the pattern is called, but it’s performance will depend on a floor’s condition. As you may have guessed, clean courts pose no issues whatsoever. But dust definitely has a negative effect on their traction. Even just a little dust will effect things to a degree so you’ll need to consistently wipe and keep the outsole free of debris.

I think things would have faired better against dust had the pattern not been flat. If the channels and grooves had been shaped into a peak then I think it would have created much more friction between your foot and the floor. Not the worst traction, but it definitely could have been executed a bit better. 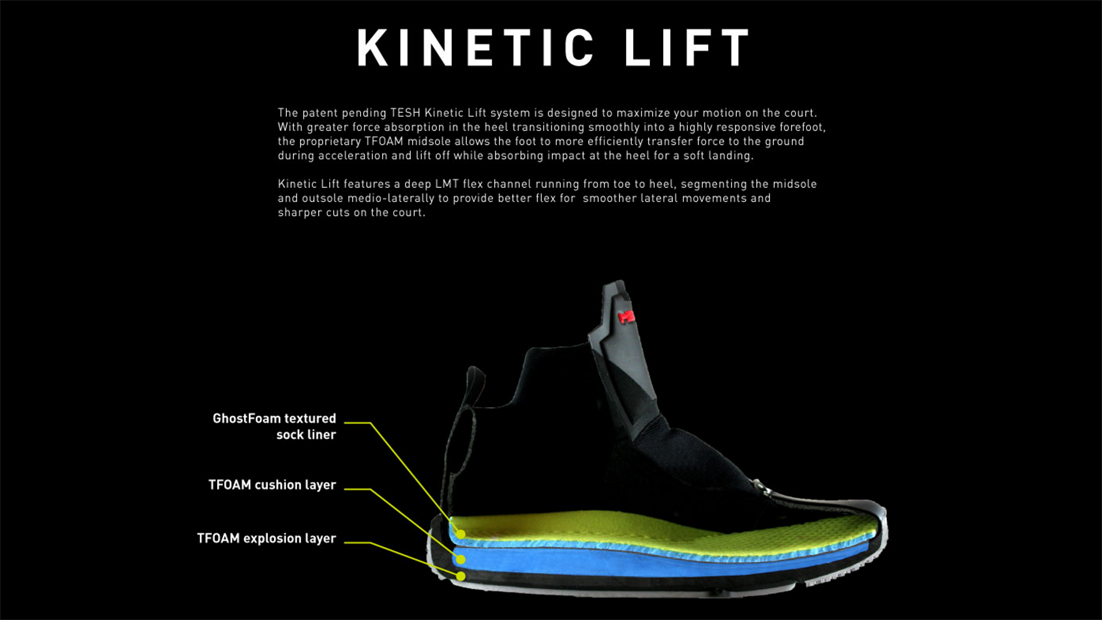 Cushion – TESH utilizes what they call Kinetic Lift for cushioning and I loved it. Kinetic Lift is a layered foam setup that uses their proprietary TFOAM system. Two layers of TFOAM are used; one is an explosion layer while the other is a shock absorbing cushioned layer. Along with the TFOAM system, their insole is what they call GhostFoam which provides additional step-in comfort and molds to your foot shape for a custom-like fit under foot.

What I love about their cushion system — much like other great foam systems — is that it does its job without getting in the way. You won’t notice anything, but that isn’t necessarily a bad thing. The less you notice your kicks the better. It reminded me a bit of PEAK’s foam cushion; it provides plenty of court feel along with enough protection for guards to enjoy. You’ll also receive some super smooth transition, but part of that is due to their LMT Flex Channel that runs through the tooling. 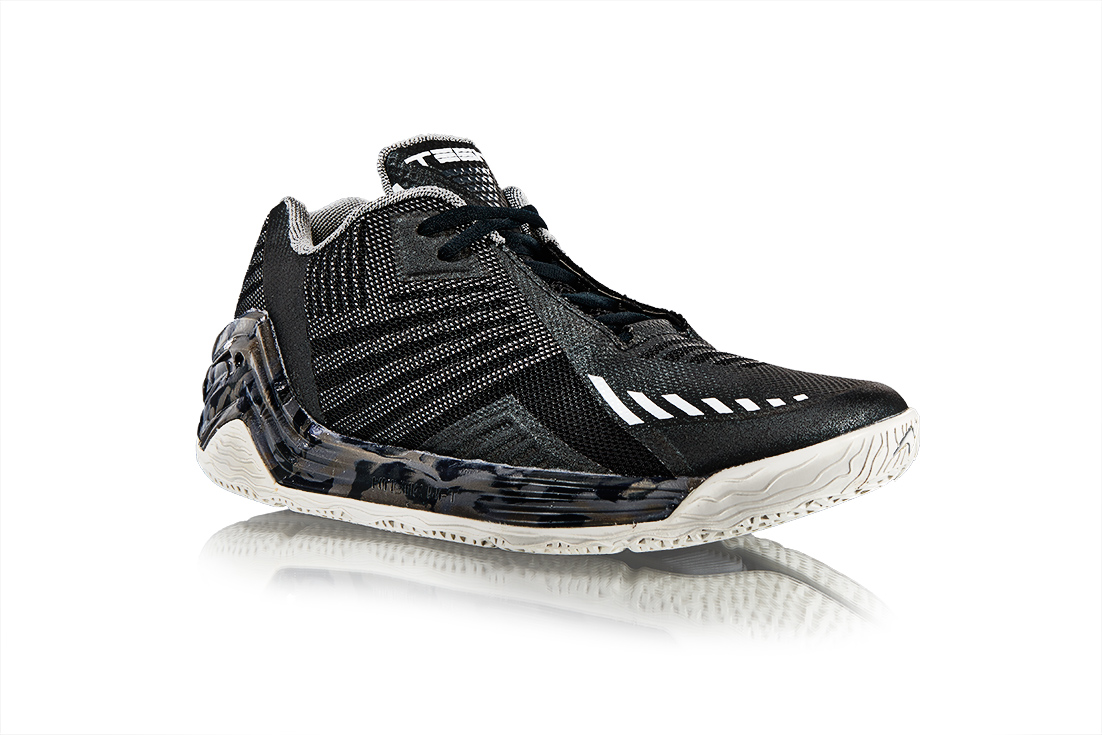 Materials – The materials aren’t anything special in terms of having a huge wow factor, but it gets the job done perfectly. The upper is comprised of a textile mesh along with thin Fuse layers in strategically placed sections that offer protection of high-wear areas and structural support. Despite being laced with Fuse, there are no sections of the upper that feel firm or stiff. Everything flexes and moves well with the foot while in motion, and for a new brand that is priced “under budget,” that’s not an easy feat to accomplish. 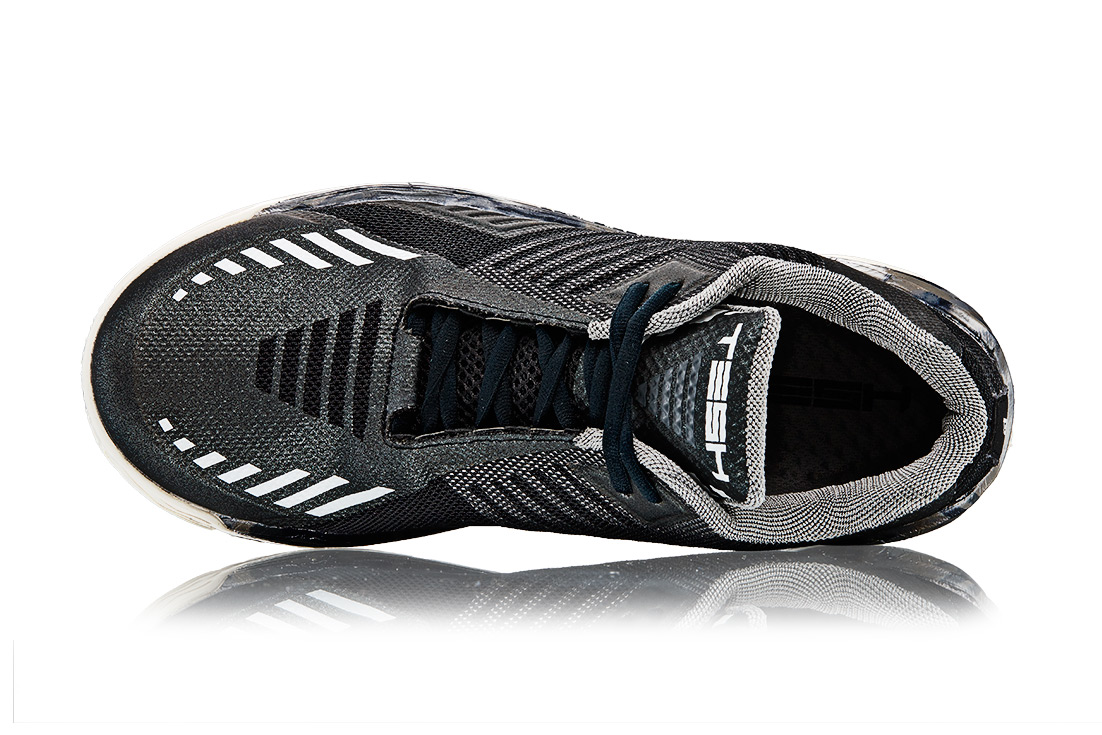 Fit – As most of you know, TESH’s models run big, except for this model. For whatever reason, the Terrestrial fits true to size so that is what I’d suggest. They are wide footer friendly, but not to the point where someone without wide feet would need to size down.

Lockdown is on-par with models from other brands. Midfoot lockdown is solid, as is the heel containment. A small suggestion would be to change the laces. They’re a bit too long, and they’re on the cheap side. So a quick lace swap would be a good look for the wearer. 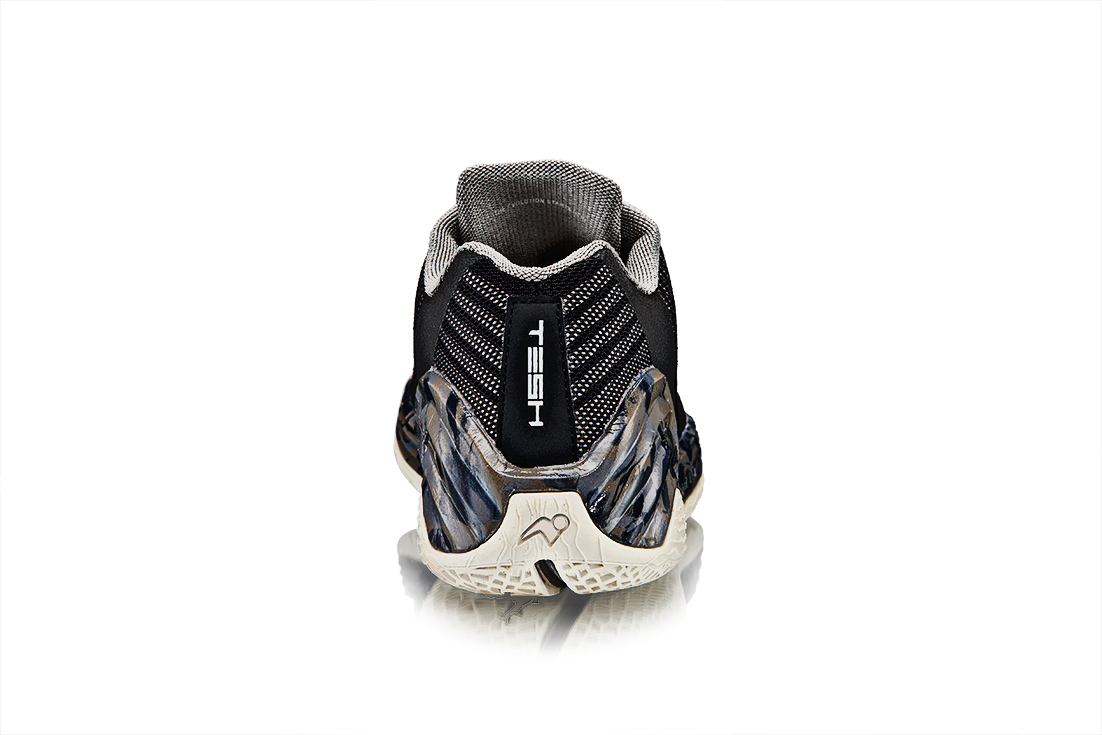 Support – Their support is average. Nothing over the top, and nothing underwhelming. You have a standard TPU heel counter for containment, along with an exaggerated rear midsole section that acts as heel support — similarly to how the Kobe 9 goes about things. The strategically placed TPU sections keep the foot contained and on top of the footbed rather than allowing the foot to roll over upon lateral movements.

Something that is missing is a shank plate. However, that is where TESH’s LMT Flex Channel comes into play. This area allows the foot to flex and maneuver naturally. This aids in transition and during changes of direction upon lateral movements. By splitting the tooling down the center it reduces the blockiness that some midsoles have. I like the setup and think others will too. If you move around the court often — with or without the ball — then you’ll likely enjoy the freedom the Flex Channel provides. 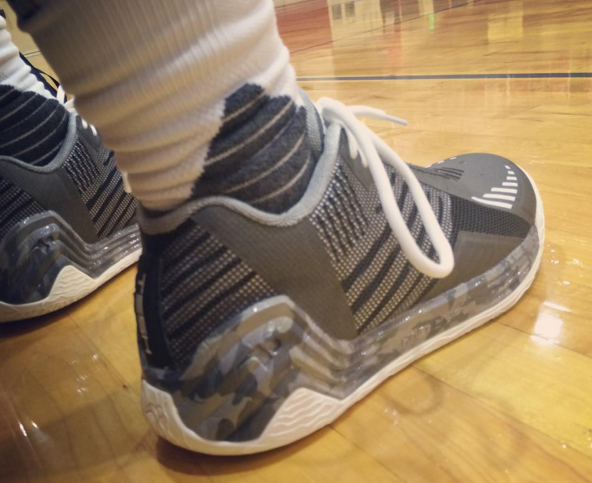 Overall – TESH is new to the scene, but their footwear is surprisingly good for their price point – these retail for $69.99. They were able to save on production costs by utilizing the same tooling throughout all of their performance models while still mixing things up a bit with redesigned uppers. I’d like to see some better traction, and once that’s done then I would easily stick these in a rotation — if I had one, since I’m always testing shoes. If you’ve enjoyed other footwear products from overseas brands then you’ll likely enjoy TESH Sports as well. They offer similar performance for less money — which is always the goal in my book — and are the best option available at the most affordable price.

If you’re down to try something new, try TESH Sports. You might just enjoy them. 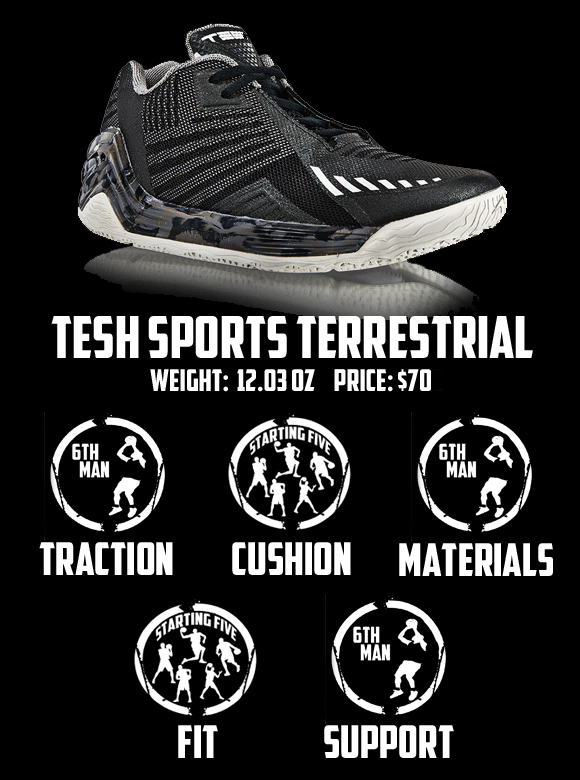