The Salming Greyhound is the flagship running shoe from a Swedish brand originally founded by an ice-hockey player. Salming focuses on floorball, handball, and running. I was told they make world class handball equipment so let’s see what they can do with running shoes.

We got introduced to the Salming brand recently when one of their employees reached out. He explained that he loved our reviews and wanted us to try Salming. Pretty soon we had the Salming Greyhound in hand. We tested them from the male and female perspective. Each of us ran 60+ miles in them and wore them in a variety of other circumstances such as weight lifting and every day casual wear.

Jodi: The real winner here is the cushion. Salming calls its midsole foam Recoil PLUS. According to their website, it’s the company’s most reactive cushioning compound and offers 20% more energy return. This being my first experience with the brand, I can’t tell you how it compares to the old stuff. I can tell you that the cushion is ridiculously comfortable without being overly mushy. I might even say I enjoyed it more than Nike’s React. gasp

Drew: This was the biggest, most pleasant surprise of the year for me. A lot of companies say their running shoes are built for hard-surface running. Very few actually deliver a shoe that makes sidewalk and city running feel like running on a rubber track. Recoil PLUS easily stands alongside React and Boost as the best foam cushions on the market. The day after long runs my feet, ankles, knees, and back felt great. This is the #1 feature on the Greyhound. Recoil PLUS foam provides one of the best cushioned rides money can buy.

Jodi: At first glance, the traction looked questionable. It turned out to be solid. It’s almost completely flat with minimal cutouts located mostly where your foot flexes in the forefoot. I found that when I would run across wet pavement those cutouts became almost like suction cups. Super grippy and secure.

Drew: Salming’s use of a Vibram outsole paid big dividends. Jodi’s right, it doesn’t look like much, but it does its job well. The Vibram rubber compound is super grippy. It uses the cutouts (that on most shoes are only for foam expansion) as an integral part of the traction pattern. I ran in the rain, on sand, roads, trails, and slippery concrete without any issues. And the outsole barely looks used after 60+ miles. It’s built to last. I hope Nike and Adidas are taking notes.

Jodi: There’s an internal heel counter with plenty of padding that wraps nicely around your heel. Other then that, the rest of the support comes from the upper material.

Drew: The generous and stiff heel counter does a good job. Almost too good. It took a couple runs for the heel area on my right foot to get pliable enough to stop digging into my achilles. Nothing socks with a heel tab couldn’t fix, but they definitely erred on the side of keeping that heel area super stiff. I imagine this was done to balance out the extremely elastic cushion of the midsole. The upper kept my foot on top of the midsole and maintained its structure even as flexibility increased over time.

Jodi: The upper is built by turning 3 layers into one piece. This creates an interesting shell that doesn’t really stretch. I found this out the hard way on my first run. I wore socks that were too thick and that poor choice caused my wide feet to suffocate a bit as the swelling kicked in. Since then, I’ve used only my thinnest running socks and I’ve had zero complaints. Well almost. I received the white colorway. You can actually see where my sweat has discolored the shoe (mainly in the creases). Actually, I’m surprised by how much discoloration has occurred. The shoe is super ventilated with holes upon holes upon holes. Even the tongue and insole have been punctured. With all that free air conditioning I’m getting, why are my feet still so dang sweaty?

Drew: I have the same question as Jodi, how does foam sandwiched between two layers of mesh restrict airflow so much? I live in Florida and sweat is a way of life. The Greyhound though, took it to a whole new level. Anything longer than 4 miles meant my socks and even the insole were soaked.

There’s also an unnecessary fuse top cap. Toe caps like this appear often in basketball shoes for durability. On a running shoe…I have no idea why it’s there. There’s not an efficient runner alive that drags their toes while they run. My best guess is that it helps the toebox maintain its shape.

Listen, the Greyhound’s upper still does the job. If you’re in a more moderate climate you won’t even notice the lack of airflow. In a perfect world, I’d want a more flexible upper attached to the great midsole/outsole combo. Hopefully, Salming’s design team can make that happen next year with the follow up model.

Jodi: As far as fit goes, I kind of covered it when discussing materials. This shoe is built like a traditional runner. I couldn’t just jam my feet in there like a slip on. I should also note that I have a wide foot, high arch situation. So finding that perfect fit in a shoe isn’t always easy, hence the sock debacle in my initial test run. Once I figured out what socks I should wear to give me enough wiggle room, I was golden. The forefoot area had plenty of space for my feet to spread out, and I actually found there was some volume in the toe box above my foot.

Drew: The upper’s stiffness works really well for support but I think some runners will feel the Salming Greyhound is too stiff. For me, the Greyhound ended up getting some nice flex grooves on the upper that have made it much more comfortable over time. Think about how much flexibility you need from a shoe before you buy the Greyhound. If you only run in knits, the Greyhound may not be for you. The Greyhound’s upper is similar to the upper found on the Brooks Beast ‘18.

Apart from the stiff upper, the shoe feels very traditional with a nice wide toe box and a standard lacing system. It fits true to size and even has nice touches like pull tabs on the heel and tongue to help you slide into the shoe.

Jodi: Honestly I love this shoe. It’s definitely in my current top three. You do need to keep in mind that this shoe is tailor-made to be a road warrior. They put everything they have into making this a comfortable ride when pounding the streets. I wouldn’t pick it to go on a trail run. I’d be worried about the cushion being a little bit too plush and rolling an ankle. But, if you’re like me and you find yourself running primarily on asphalt and concrete, I’d recommend these in a heartbeat.

Drew: If you’re doing a lot of mileage on concrete or asphalt, the Salming Greyhound is a great shoe to have in your closet. The price tag is what you’d expect from a shoe of this type. The plush midsole with Recoil PLUS cushioning and the Vibram outsole make this a big winner in urban environments. It’s durable from top to bottom and will last 300-500 miles. For me, this was a great introduction to Salming and now I’m looking forward to checking out their entire running line. 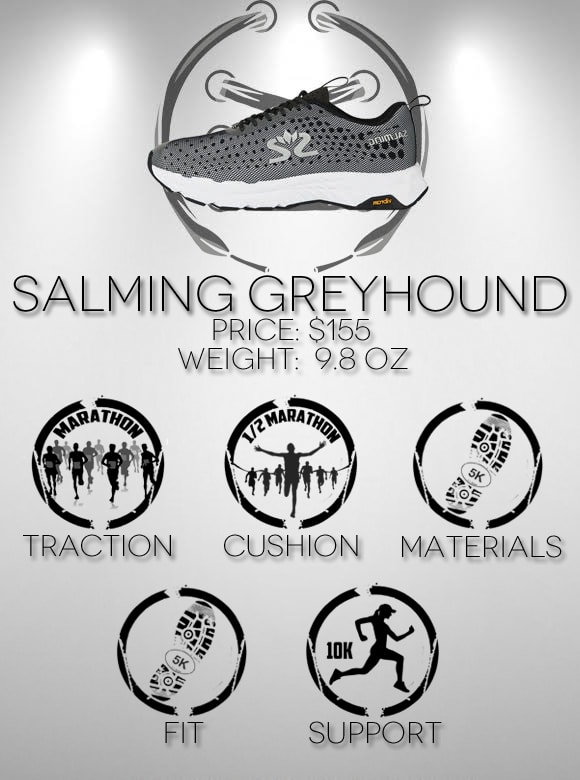