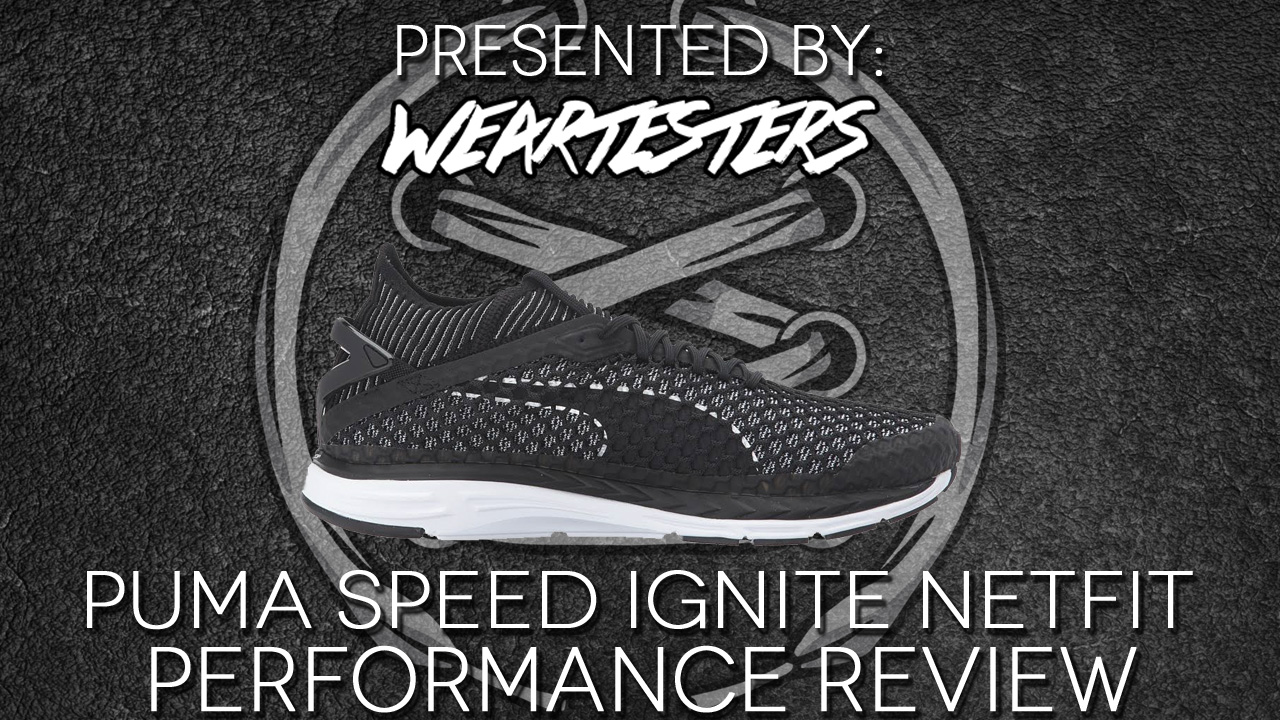 In case you missed it, Puma has been doing some serious things with its current designs, just take a look at the Puma Speed Ignite Netfit runner.

It began about a year ago with the Evoknit Ignite (reviewed here) when Puma joined present and future with a knitted upper and serious cushioning.This year, the Tsugi Netfit and Tsugi Shinsei continued the audacious design pattern, and now, we get the peak at the performance.

Is the Puma Speed Ignite Netfit runner more design than function? Only one way to find out… 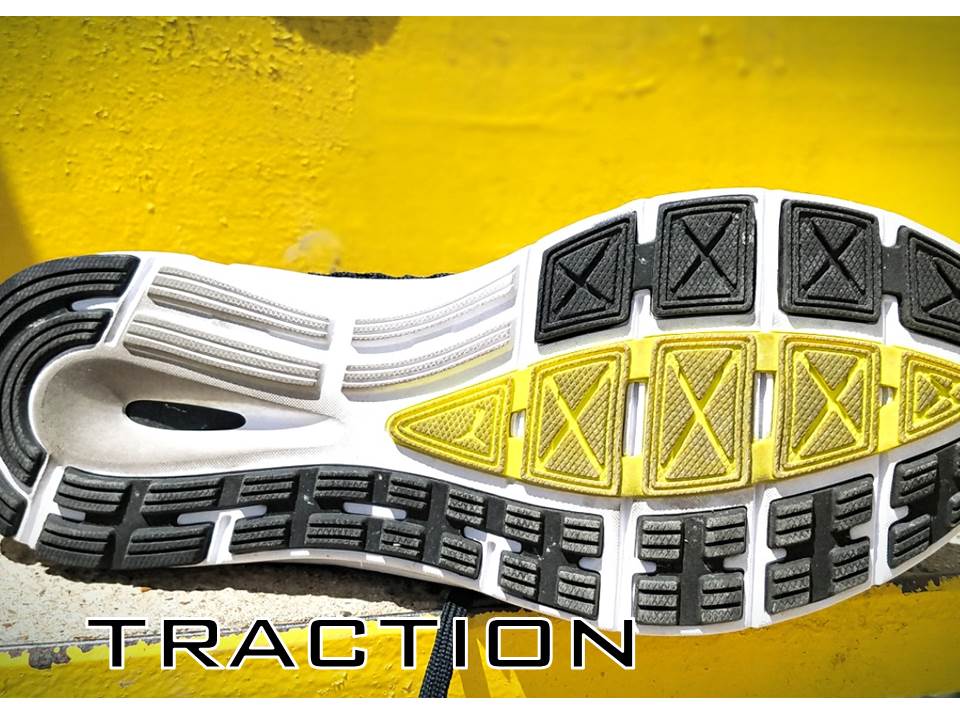 For a runner, really, really good — great, even. The outsole features Evertrack+ in the high-wear areas around the heel and the forefoot. Even though it is different colors across the ball of the foot, the durometer of the rubber feels the same.

The Evertrack is thick and solid, and after the five weeks of wear for this performance review, which made up only about 70 miles, the soles look brand new (minus the dust). One thing Puma has been trying to perfect is a spring/propulsion system by using bands stretched between different areas of the outsole that provide energy and shape return. This concept was first produced in the Mobium.

On the Puma Speed Ignite Netfit you can see the yellow rubber stretched across the flex grooves. This, in theory, helps the sole pop back into original shape, giving the runner a quicker response. Toe-offs were smooth and fast, but I didn’t notice any real “help” into my next step.

On wet roads and concrete there was no slip at all. Normally, with harder rubber, the outsole becomes slick in rain or water. Soften the rubber up and it wears off too quickly but has great grip. I have tested some shoes that were straight hoverboards on wet roads, but the Netfit grabbed and held on. 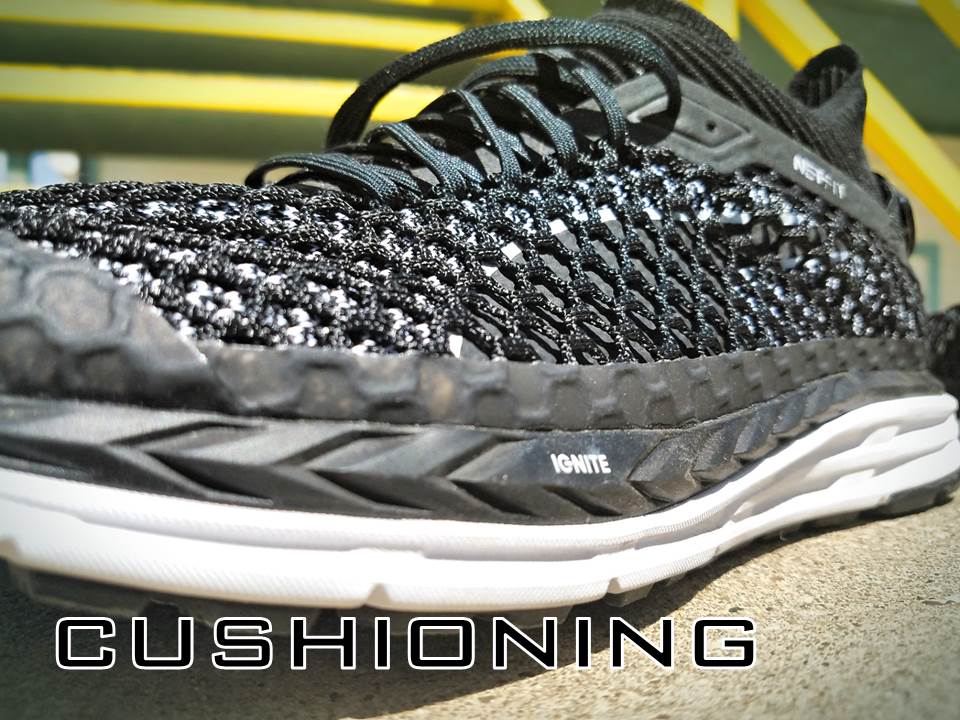 The one category every shoe company needs to have a name in is cushioning. You check our site and notice all of the different names — Boost, Bounce, React, Zoom, Liquidfoam, Charged, Kompress, Gradient Dual — and you know one thing: every company believes it has the best system.

Puma has Ignite, and it is good. Not quite great — the energy return is not there yet — but for cushioning impact, Ignite does a nice job. Last year, I reviewed the Evoknit and noted the foam felt dead; it absorbed and cushioned but had no bounce back, no response.

The Ignite Netfit solved a part of that issue, and the solution may seem strange. Puma took volume out, making the midsole thinner. The Ignite foam now rides lower, feels more compressed, and bounces back quicker. With a 6mm drop from heel to forefoot, the Puma Speed Ignite Netfit promotes forefoot/midfoot running, which in turn promotes faster tempos. Even at these faster speeds, the Puma Speed Ignite Netfit kept pain out of my knees and lower back, even after longer than normal runs. 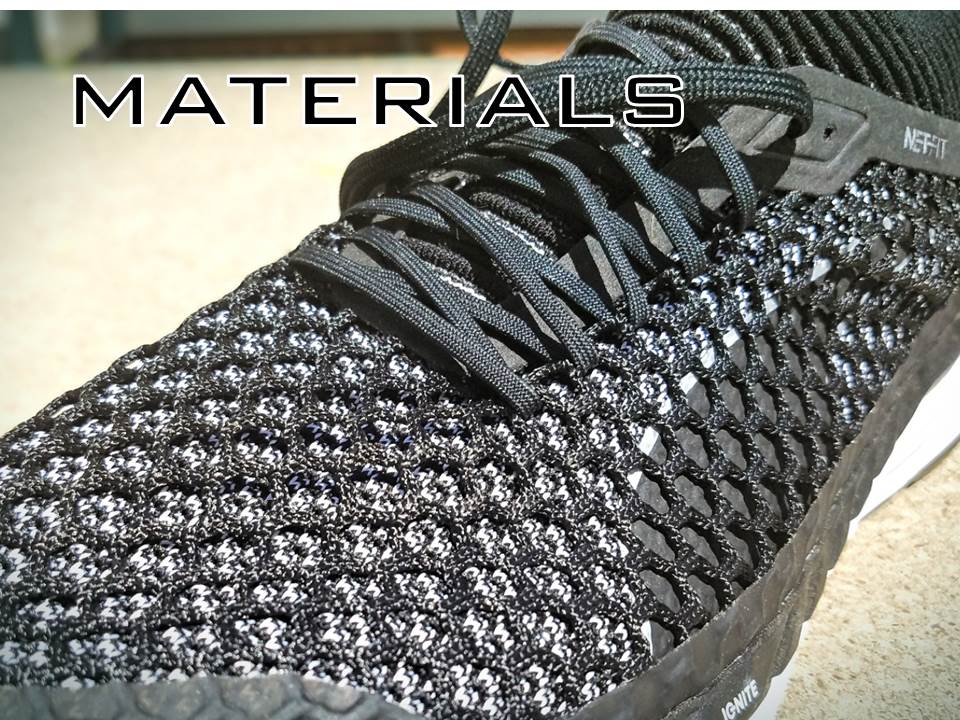 Here’s where things begin to change. Let’s begin with internals: the Netfit features a full-length compression inner sleeve. But it isn’t really internal because you can see it from the outside. The bootie is knit, full-on, and feels great on-foot, although it isn’t exactly breathable. The heel area is nicely padded with a sueded material that wraps the inside, but it isn’t thick or cumbersome enough to make the shoe feel clunky. The ankle area is still knit but has some extra compression elastic added in for a better fit and containment. Now, here is the new…

Laid over that sock is the Netfit system. A high-grade nylon netting is used on, over, and around the upper, and each hole can be used for lacing. If you can’t get a fit in this shoe, you are a lost cause (unless you are extremely wide-footed). The loops are all reinforced with the same nylon, except the two upper holes that are fused, and after five weeks none of the rope has busted. This takes the concept of the adidas Dame 3 a whole nutha level. The materials are finished off with a very minimal heel counter that ties into the lace straps to pull the upper together. 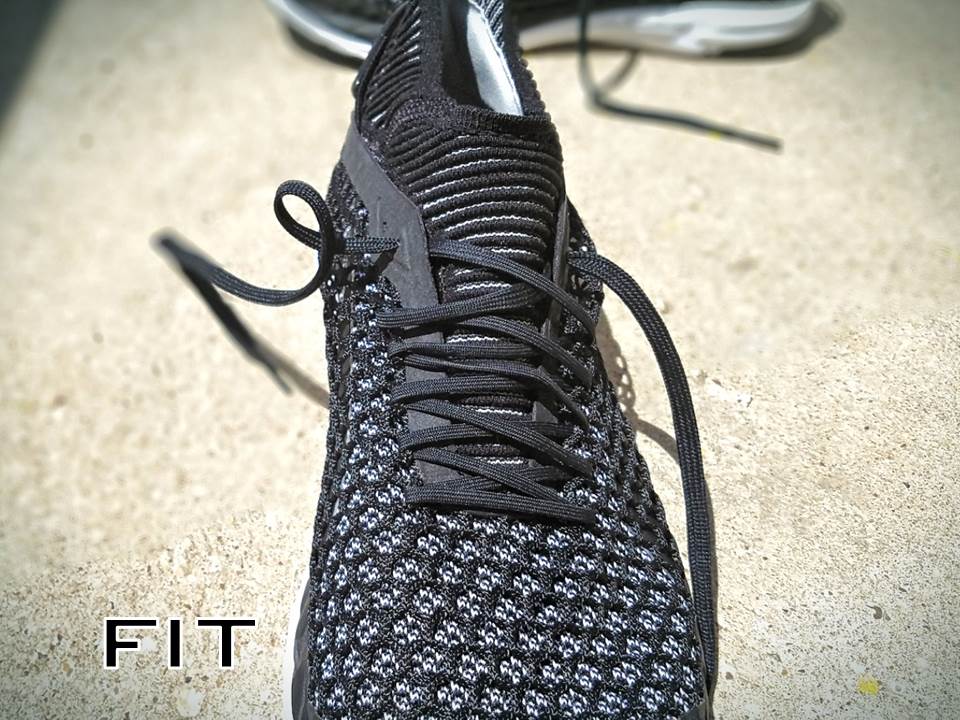 Again, if you can’t get the Ignite Netfit to fit your foot, you have some issues. Seriously, it’s in the name. Length was true to size — a normal 10.5 gave about a finger-width of extra space, which when running is about perfect. Heel slip was taken care of by the internal padding and the dynamic heel counter that wraps the foot.

And, of course, the midfoot and forefoot was completely locked by utilizing the Netfit system. The Puma website even makes it simple for you because the brand posted pictures and diagrams of lacing designs to stop common problems. Once you get dialed in, you don’t have to worry at all. Granted, the knit doesn’t exactly contain the foot in complete Fort Knox style, but for forward/backward, normal running, you want freedom, not seat belts. 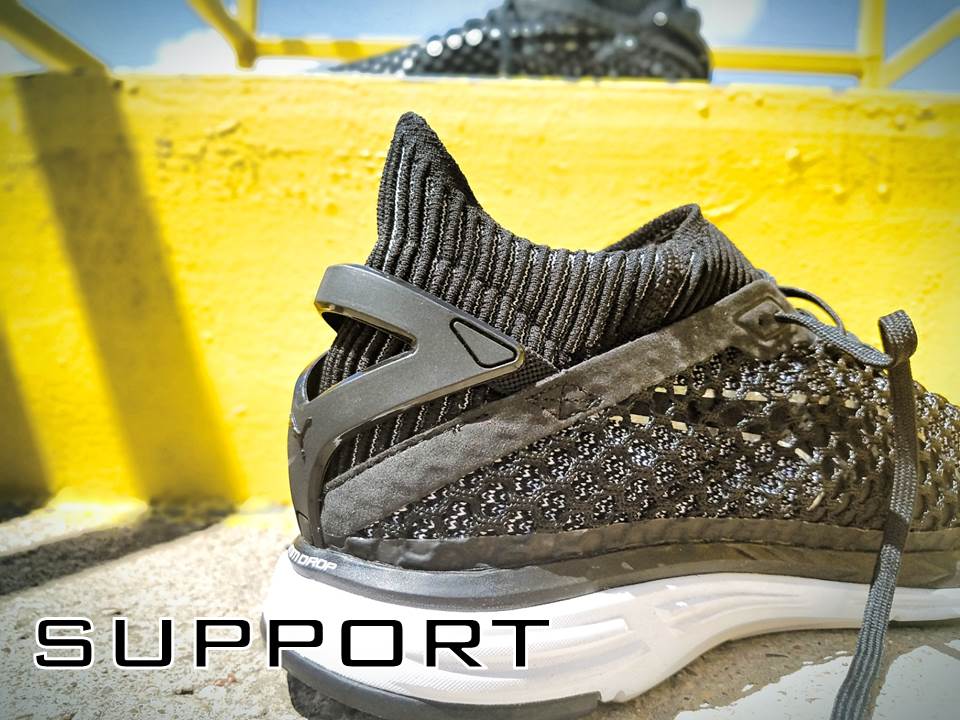 Not the best, but the Puma Speed Ignite Netfit is a speed shoe, not a support/stability shoe. Actually, support really needs a badge lower than Benched, but again, this is not a support shoe.

The upper knit is extremely stretchy and the netting adds nothing as far as structure. The heel cup is super-minimal and ties into the lacing with elastic, so it stretches and gives. There is no midfoot shank anywhere in the area. The only thing going for the Netfit in the support category is the fit, which is almost perfect.

But, again, this is not a bad thing: the Speed Ignite Netfit is a shoe built for sprinting, training, and for very precise runners. If you need a solid sole, high heel counter, and firm medial post because your feet aren’t right, do not come here. 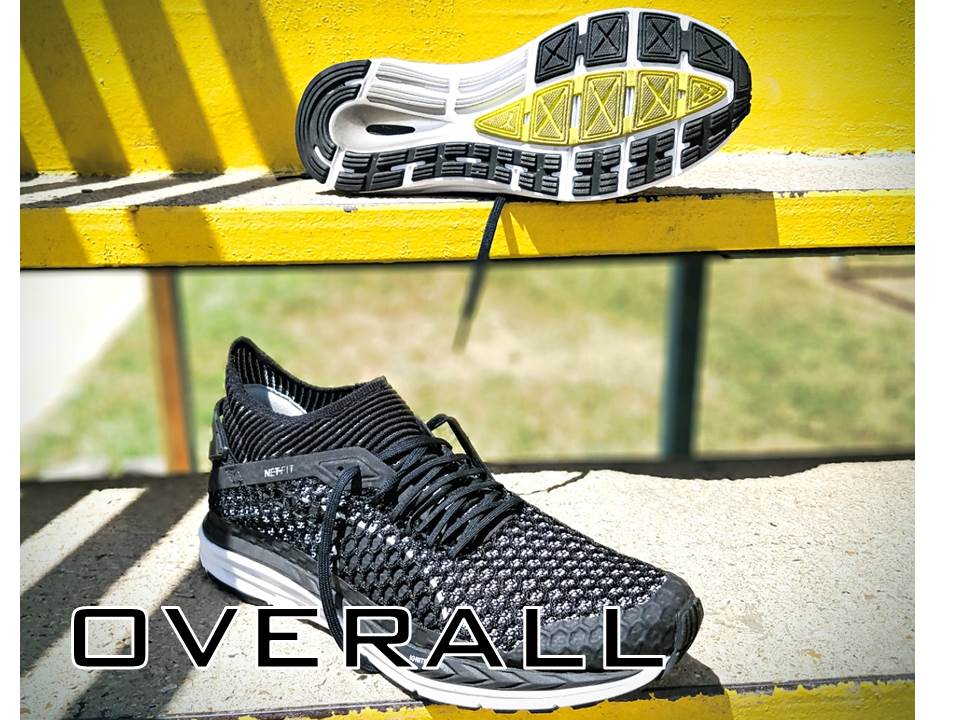 New technology and designs are the reason we are here reviewing shoes and products. New technology makes us happy. We are shoe nerds who want to know how everything about how a shoe works and how it is improved over the last model, or how Brand A is better than Brand B.

The Puma Speed Ignite Netfit is not really new technology, but rather a new design and implementation of tried ideas. Sure, other companies have variable lacing. Other companies have knit. But Puma combined them to provide an excellent-fitting well-cushioned shoe suitable for all road conditions. The cushioning is fast and low and the transition just screams “SPRINT!!!”

If you need a serious speed shoe, look no further than the Ignite Netfit. Don’t give up on this Puma — Netfit could have some serious uses in other sports as well (*hint* there’s more to come, but I can’t let the cat out of the bag just yet). 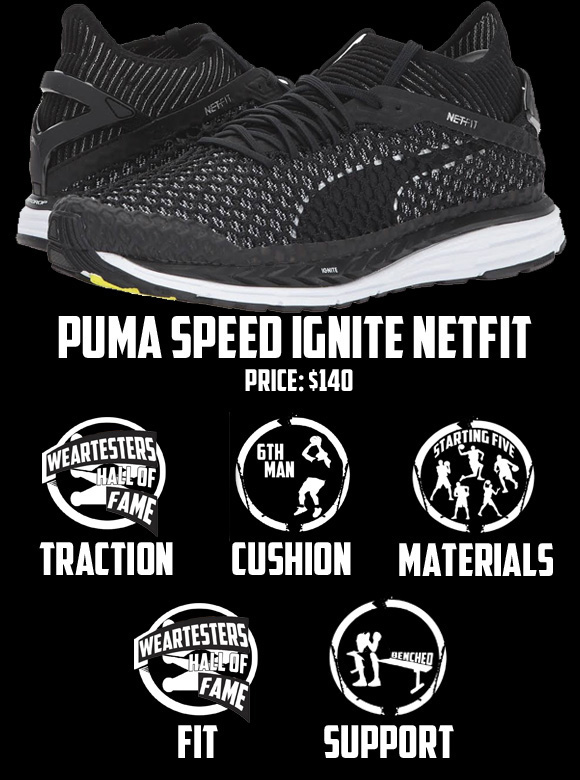