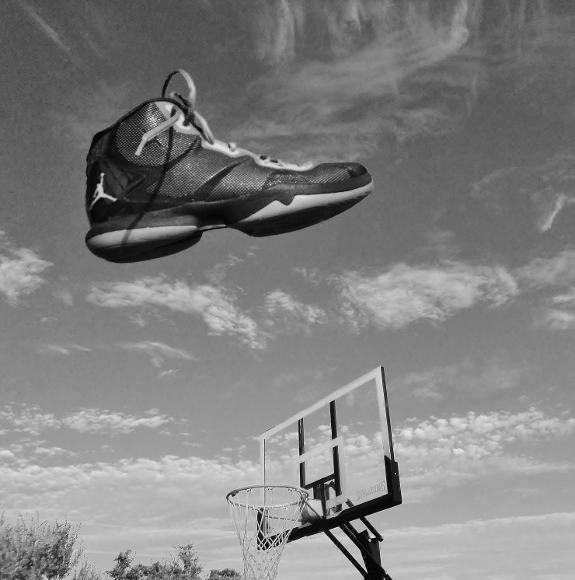 Jordan Brand does it again with a performance Monstar. Not quite perfect, but very, very close. Where do we begin? With the shoes of course…

Seems like just last month I was reviewing the Super.Fly 3 PO (actually, it was two months) and contining to love the Super.Fly line. I had already seen the J-Zoom on the Super.Fly 4 in pics but couldn’t imagine how it improved over a normal unlocked unit. The foam backed upper looked to be like the CP3.VIII AE, which was a great fitting upper. The colorway was crazy. What was there not to like? Well, I guess, if I must, get to the court time… 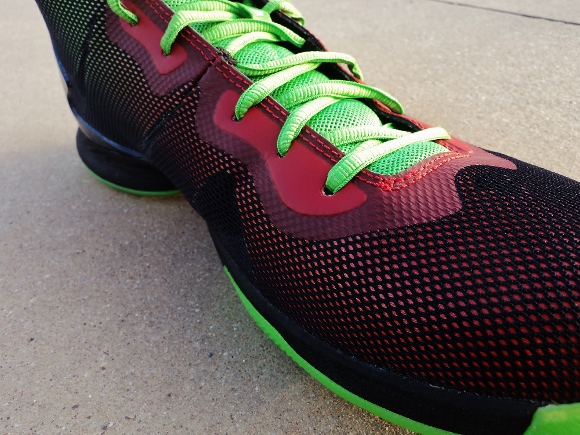 MATERIALS – Foam-backed mesh in certain areas; in other areas, simply mesh with a little fuse for strength. I loved the upper, especially compared to the SF3. Where the 3 was super-stiff fuse/synthetic, the SF4 is completely flexible and broken in straight from the box. The foam backing helps with comfort and fit and does it well – this is the best fitting Super.Fly in the line. The fuse areas around the lace holes keep Jordan Brand from dealing with ripped-lace-hole returns. From the box on first wear I could bend and twist the upper like a runner, making me happy for my feet.

I’ll get more in detail on the outsole shortly, but for materials, we get a soft, almost translucent rubber compound that is sticky and grippy on first wear. More mesh on the tongue for ventilation and we are on our way. 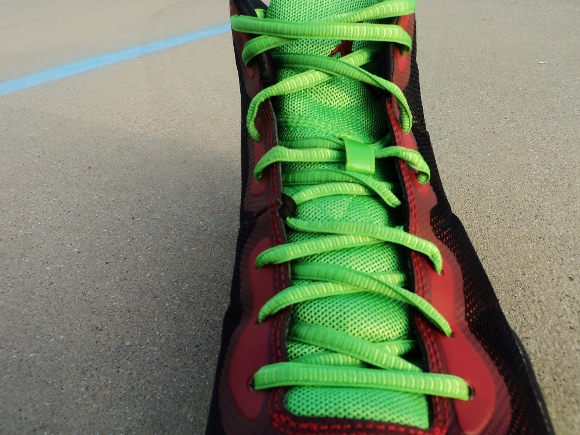 FIT – Again, best fitting Super.Fly in the series. The length in my normal 10.5 leaves me about a fingers width between my big toe and the end of the shoe which I found very necessary. I like a little space so if I get any slip in the shoe I don’t immediately bang into the box hard. Also, after a LONG run like my last in these (11 games of full court to 12: I went 8-3) my feet tend to swell, so a little room is perfect. The forefoot is cut narrower than either of last year’s models but normal width should be fine – the laces allow for loosening up. I am a D width and felt perfect.

The midfoot FitStraps really wrap that area of the shoe into the foot, not just pulling the sides up and around but pulling the foot into the midsole. I didn’t think one strap would do much, since the Jordan XX9 had them from toe to ankle, but I was shocked, SHOCKED I say, to feel how much support I received from those two little lines. The shoe is a little higher cut around the ankle and heel and with the use of Pro Combat in the Achilles notch, heel slip is a distant memory. This was actually a shoe that I didn’t lace up as tight as possible because I felt locked in at casual tightness. 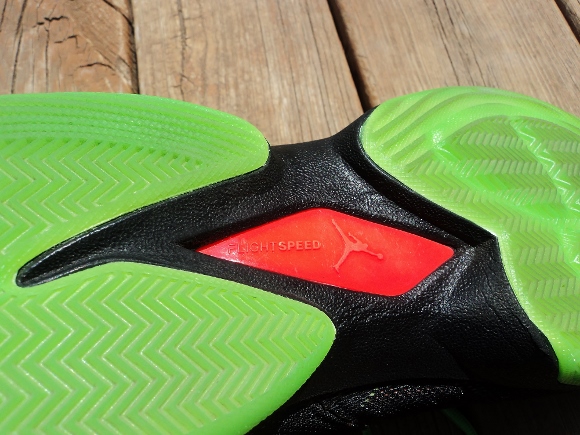 SUPPORT/STABILITY – Jordan tried and true – the FlightSpeed plate is the new FlightPlate from the last two years, and that is a good thing. Along with distributing the responsive bounce from Unlocked Zoom across the foot, the Plate/Speed also gives the shoe its torsional support. For those new to this, torsional support keeps the shoe from bending in the wrong places but does allow the shoe to bend in the right ones. In the middle, you don’t want the shoe to bend down. With the segregated outsoles (forefoot and heel are two different pieces) you get some opposite-bending possibilities. Plate/Speed takes that option away by being stiff and holding tight. It is not as stiff as a carbon fiber plate, but CF tended to be too stiff and caused foot fatigue from working harder to create good bend. The TPU plate in the Super.Fly 4 makes transition smooth and not slappy at all – another feature of a softer plate.

There is no outrigger to be found in the forefoot, so you have to depend on the fit and low ride to keep you stable up front. Again, not a bad thing – some outriggers leave the forefoot feeling wide and slow. If the shoe is lower in profile, not a problem. 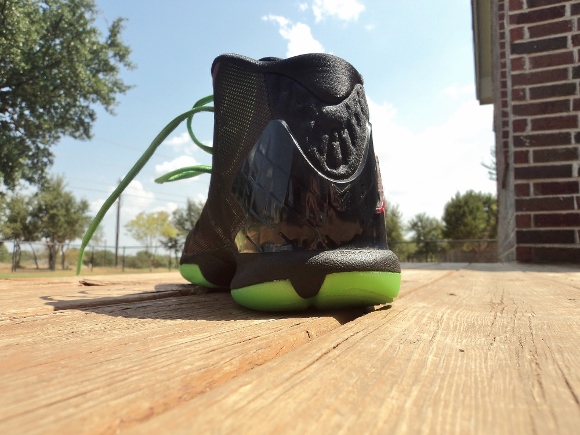 The heel support is provided by an external heel counter that is not too hard, not too soft – just right. Most shoes opt for a hard plastic heel counter to keep the heel stable and not allow roll. The SF4 is more of the softer PU and does allow for some side-to-side bending, but coupled with the higher cut and lacing to the top the heel is locked into place.

I will say the shoe felt narrow and “tippy” on initial try on. What that means, as I explained in the video, is a shoe tends to have a “point of no return” where an angle allows the shoe to rollover and not hold up. Some shoes, like the Kobe VIII and Rose 1 tend to have almost no tip. Some others, like the Nike Air More Uptempo and Nike Ultraflight, roll with little or no effort.  Once on court, the Super.Fly 4’s “tippy” went away, and quickly, due to the low ride and great fit. 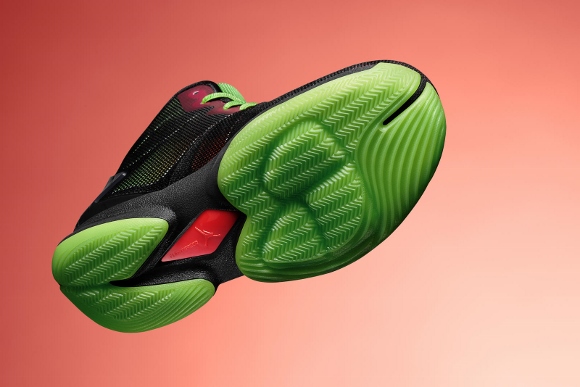 TRACTION – Squeaky and tight, even just walking around. I even got squeaks on my concrete driveway. More due to the materials than just pattern, this shoe was on when it counted. Those lovely 24 Hour Fitness courts are nasty by Wednesday (Monday and Tuesday ain’t great either) but the Super.Fly 4 put in work. I really liked the wavy forefoot pattern under the toes. not often I notice a difference in a pattern, but on toe off I could tell it wasn’t herringbone but a smoother transition. The segregation channels in the heel and forefoot also let the shoe dig into the court and hold on takeoffs, something I noticed when making cuts and coming through the lane. The lower I got, the better the shoe felt on those moves. I do NOT think the outdoor courts will love this shoe – the rubber is soft and pliable and the pattern is shallow. Look elsewhere for an outdoor shoe – which is a shame, because the Super.Fly 2 and 3 were great outdoors. I could be wrong, but with bottom – loaded Zoom the last thing you want is the outsole wearing through. 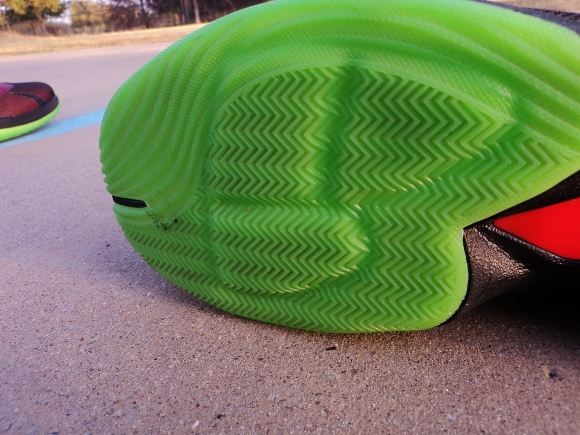 CUSHIONING – Told you all we would get here. Cushioning is, well… there is Zoom. And Foam. And the Zoom is Unlocked J Zoom. And the foam is foamy. Here is the deal – the foam carrier and FlightSpeed system take away any cushioning response from day 1 to about day 3. Not bad, just takes a little breaking in. After that, the Super.Fly 4 is more Jordan XX9 than XX8. Again, not bad – the XX9 got the job done, it just didn’t bounce like the XX8. The XX9 also didn’t explode like the XX8, so there is your trade. The unit sits almost even with the rest of the outsole instead of protruding so the unstable feel found in first generation Unlocked is gone. Once broken in, the SF4 rides low and tight and I felt extremely quick on my toes and running. The response time is great – no lagging feel delay in reaction. It just isn’t special, which is more on me than Jordan. I have been so impressed with JB innovation and performance the last three years that I fully expect EVERY shoe to have a “wow” factor, so when they don’t I am like a kid with a broken toy. The J Zoom is great for guards and wings and once broken in is lovely.

The heel is foam again (phylon) and again dos the job of absorbing impact and bouncing back. I never felt lessened by a lack of Air, but there was just protection, no performance, in the heel. With the other basketball companies making top-rated foams now it may be time for Nike to rethink Lunar and bring a new innovation to the table. 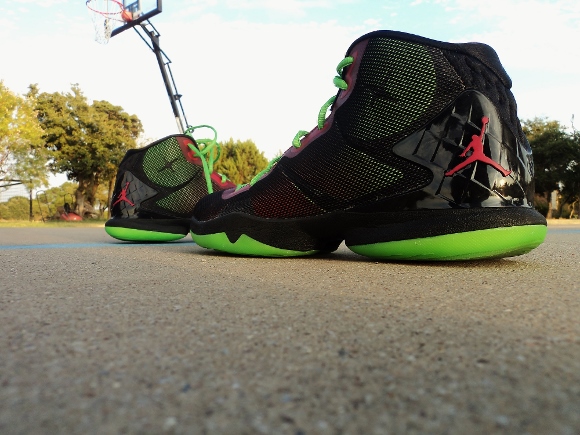 OVERALL – Hated to end on a negative note, because really, the Jordan Super.Fly 4 is one of my rotation shoes at the moment. The combination of great fit, materials, low-riding court feel, and responsive cushioning make this an almost great shoe. The phrase “sum being greater than the parts” comes to mind – add the shoe up and you have an almost, borderline great shoe (very good for now). Again, I have said this for years, Jordan Brand is putting out killer performance product, using new technologies and materials. J Zoom? Unlocked? Woven uppers? Push it, and keep pushing it. The real problem is the bar is set so high that anything less than cutting edge feels like a letdown. However, the Super.Fly 4 is anything but. Only get this shoe if you are serious about ball – it has all the elements a player should look for. And you can help save the Earth from that pesky Martian and his pet Gossamer.