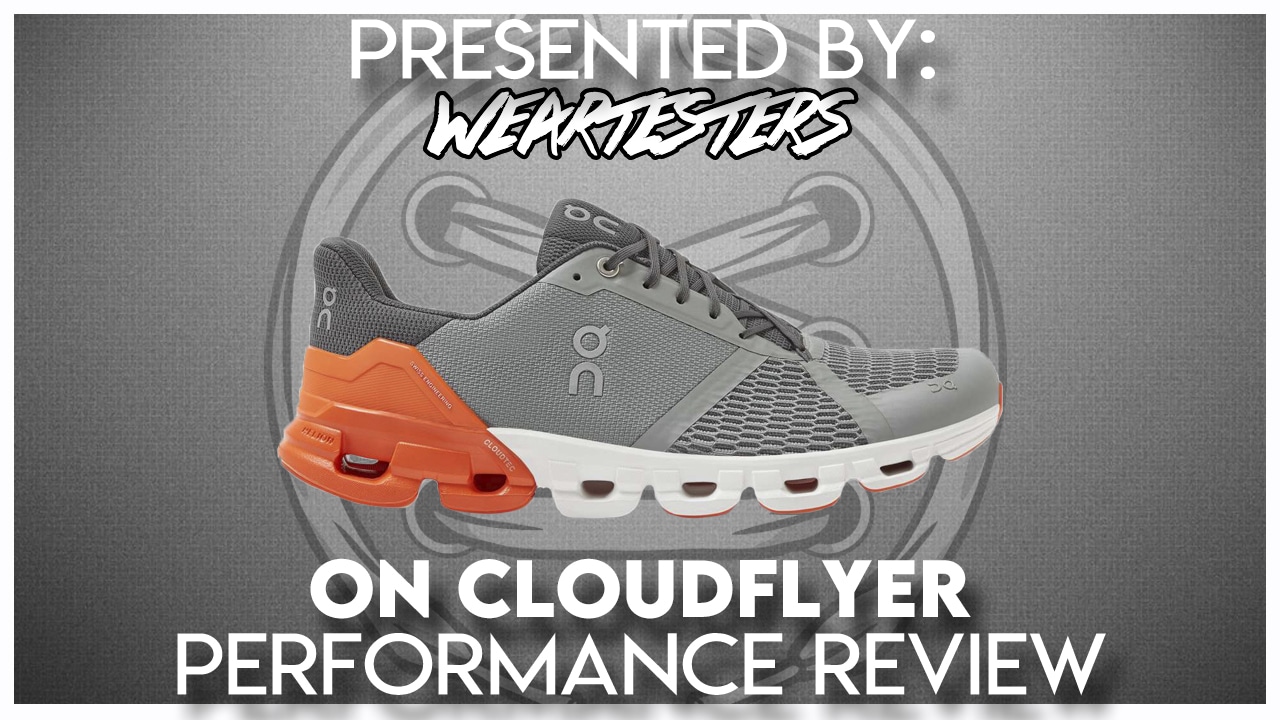 The On Cloudflyer is the latest iteration of On’s most supportive everyday running model. Instead of naming the shoe Cloudflyer 2, On keeps the Cloudflyer name and just replaces the previous model with the improved version. In a world featuring the Nike Pegasus 37, it’s a refreshing naming scheme.

Improvements over the previous generation of Cloudflyer include better cushioning, an updated outsole, and a plusher upper. But does the On Cloudflyer have what it takes to be your daily running shoe? Let’s find out.

Jodi: If you’ve been around any group of runners lately (observing social distancing rules of course) then you know there’s a buzz going around about the brand On. And even if you haven’t heard the brand name specifically, then I’m pretty sure you’ve at least seen a pair or two run past you. If you ask me, the look of the outsole/midsole combo is pretty unforgettable. It’s got 12 tubes, or what the brand calls Cloud elements. They’re supposed to give you a healthy rolling motion when you land and provide a stronger push off with each stride. My feet and joints were all very well protected with this setup. No weird aches or pains popped up during or after my runs. That Swiss engineered Cloudtec did the trick.

Also, special shoutout to the included insoles. It’s part open cell foam but cupped at the midfoot and heel by a denser carrier. The insole offers instant step-in comfort along with ventilation holes to help fight the funk. The carrier cups your heel nicely. Honestly, the insoles are so good I could easily see the brand selling those puppies separately.

Drew: Large Helion Superfoam Clouds sit below On’s typical TPU Speedboard. It’s a fairly typical setup for On except the Cloudflyer has bigger clouds than most of their other models. The Cloudflyer is one of On’s most cushioned models. It’s not super plush like the Pebax on the Saucony Endorphin Speed. I’d say it’s most similar to the Lightstrike on the adidas SL20.

Oh, and as Jodi mentioned, the insole is money. The step-in comfort of the insole is a big reason you see various On models consistently getting rocked casually.

The Cloudflyer is light, has good impact protection, doesn’t bottom out, and toe off is good enough for speed days. It’s firm, not gummy, and still protective enough that everyday running in them feels fine.

Jodi: I can’t speak to how the Cloudflyer does in wet conditions. August in Sacramento has been by far the hottest month of 2020, without a single rain cloud in sight. But I can say that the rubber compound is tough. Close to 50 miles and the traction pattern still looks like new.

Drew: Agreed on the durable rubber compound. Looking at the rubber parts of the outsole you’d hardly think I wore these shoes. I did get to test the Cloudflyer in rainy conditions. The low abrasion rubber and it’s raised repeating rectangle pattern doesn’t slip at all when emerging from a wet puddle on dry ground. I bet this outsole will shine in rainy, snowy, icy, and generally wintry conditions as well.

Jodi: The On Cloudflyer has support in spades. The Cloud elements are nice and wide in the forefoot. Then the super plush tongue is attached in a 3/4 sleeve style bootie. The back of your foot is locked into place between that beautiful insole cupping you from below and plenty of padding all around your ankle and achilles area. To really seal the deal, On uses a star style lacing system. If you haven’t seen that lacing style before make sure you check out the pictures. It’s a trip to look at.

The large external TPU heel counter interacts well with the midsole and gives the foot a real nice heel cup. This is helped by the extra padding in the heel, but more than that, it has the feel of guiding the foot away from excess twisting. This is a shoe that overpronators should try. It will make a difference without bulk or a feeling that the shoe is in control of your stride.

Jodi: The On Cloudflyer has probably the beefiest upper in my current running rotation. It might actually be the most structured upper I’ve run in during 2020. But don’t confuse the words beefy and structured with suffocating and rigid. The Cloudflyer is very flexible and well ventilated with its mix of many different types of textiles (open celled mesh, engineered mesh, etc.). It feels like On has carefully mapped out exactly how your feet bend most naturally. Then, they placed all the seams in the right areas to make sure the upper really moves with you and never against you.

Drew: On’s various textiles always feel a little more premium than other brand’s textiles. A little softer to the touch, less flaws, with better on foot comfort. You’d think that wouldn’t be possible because mesh is mesh right? Yeah, doesn’t make sense to me either, but I’m impressed.

I also want to quickly note the Cloudflyer does feature fuse around the toe, in a v shape at the forefoot, and around the eyelets. On only uses fuse where it helps with durability and maintaining the shoe’s shape. They do a good job of making sure no fuse gets in the way of how the shoe bends.

Jodi: As a wide footer, I’m not gonna lie, I was worried at first. As I touched on in the Materials section, the upper is very plush. When I did my first try on, I could feel the entire upper touching every single part of my foot. Usually this sensation does not bode well for me. It didn’t feel like there was any wiggle room 😨.

Turns out all of that panicking was for nothing. So far I haven’t had any weird hotspots or foot fatigue. I haven’t had to rework the laces to try and make more space. I honestly feel like the Cloudflyer is one of those shoes that fits like a glove. It hugs you and then gives your foot room to breathe. I say go up half a size from your regular day to day shoe size.

Drew: With my more narrow foot, I went true to size and the fit was great. Wide footers will probably need to wear a half size up to make sure they have enough room through the midfoot.

But let’s talk more about that midfoot. The super plush, gusseted tongue that is also a ¾ bootie? Super nice fit. It’s the type of midfoot hug most people really enjoy because it makes you feel so secure.

Overall, the fit feels great while running but they shine for casual wear as well. You can easily wear them all day while walking or standing. The Cloudflyer has earned a spot in my casual rotation.

Jodi: The On Cloudflyer checks so many boxes when it comes to comfort and durability that I can see why so many of my runner friends have moved to On. They feel like a company that has really studied the average runner and what we want out of a shoe.

Drew: The words I associate with the On Cloudflyer are comfortable, supportive, and snazzy. It’s got a lot that will make runners happy. At $160, it’s on the pricey side, but at the same time you can really tell On focuses on the build quality of every pair they make.

Thanks to On for sending a pair to test. On was not given any editorial control of the review. This review is based on our weartesters’ experiences using the shoes for speed workouts, trail runs, treadmill training, long runs, casual wear, and more.