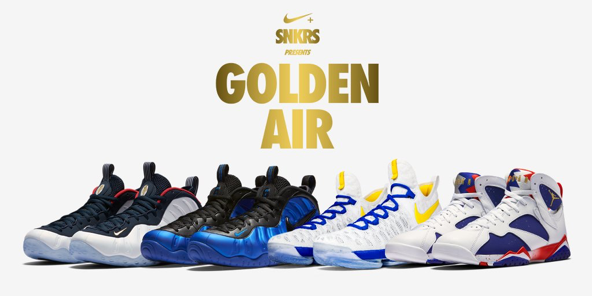 Niketown San Francisco just gave us a preview of something that will be coming later this week. Four sneakers — a Nike Air Foamposite One, Nike Air Foamposite Pro, Nike KD 9, and Air Jordan 7 — are all seen in the image below. The tweet that was posted is captioned, “Something big is coming to the City on 7.23. Nike+ SNKRS presents GOLDEN AIR.”

What exactly is “Golden Air” though? The only thing that these four sneakers have in common is that they all utilize a form of “Air” cushion, whether it is Nike Air units or Nike Zoom Air. With the Olympics only weeks away, there could be a tie in there. Only time will tell what this “Golden Air” could be, so stay tuned to @NikeSF on Twitter, as well as WearTesters.com for any updates regarding the Golden Air unveiling.