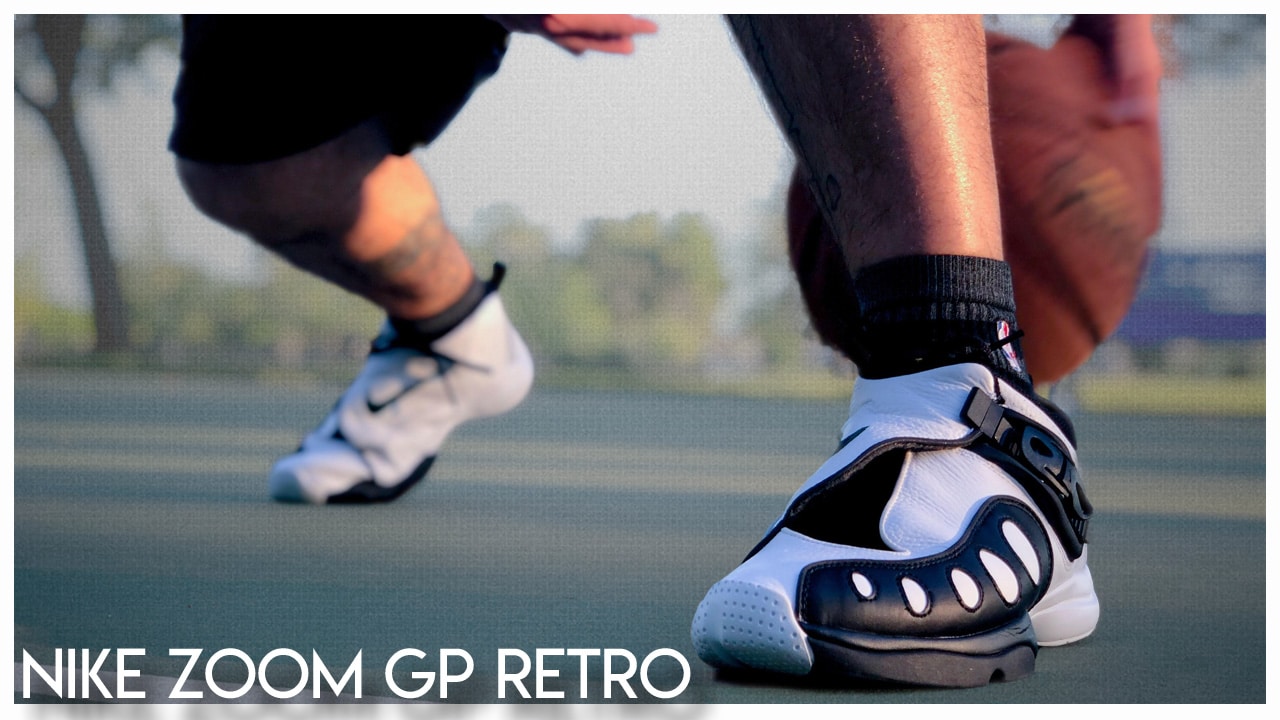 Why does Nike Retro keep winning the performance battles? It could be because of shoes like the Zoom GP. Read on for our full Nike Zoom GP Retro Performance Review.

Herringbone, herringbone, herringbone. Yeah, we know, you get tired of hearing it, but we get just as tired of saying it – herringbone WORKS almost every time. It isn’t hard – you can vary the pattern a bit, put an area with a different direction, but it still works. The Zoom GP is covered all across the forefoot and right under the heel – your main points of contact – while the midfoot is raised from the floor and is just white rubber. The forefoot is segmented with large flex grooves running across and front-to-back, which originally was mirrored by the segmented Zoom unit, but since that Zoom unit is not found here, the sole being split does really help with flexibility. The traction is freaking awesome – not much else to say, but I will.

The grip from front to back, lateral, and every move in between is perfect – no slipping, no sliding, biting traction that never fails. I tried these on four different floors, from bad 24 Hour courts to a pristine high school court, and not once did it fail. The grooves are wide enough to push out the dust and the rubber is solid, so outdoors should be good as well. They seriously, SERIOUSLY, don’t make them like this any more.

Zoom Air in the heel. Zoom Air in the forefoot, Nike actually gives us the same cushioning as the original, with one slight adjustment – where the 1999 version had a huge Zoom unit that was segmented into four sections (think of the Kyrie 5 Zoom Turbo and the KD12 – yeah, it ain’t new). the retro has a full oval forefoot unit that is responsive and low. The original was one of the lowest riding, court-feel shoes ever but still had great impact protection. The Zoom GP retro is exactly the same – fast, responsive, bouncy – a true quick guard’s shoe. Playing defense and drives to the lane feel easier as the traction and cushioning take over and push through.

In the heel we get a thick Zoom unit, and we know it is Zoom because it says it right there on the sole (love the old-school logos). I do heel-strike when coming off screens and planting for jumpers and the Zoom here was absorbing and bouncing back off of every move. Couple the Zoom with the Phylon midsole and you get everything a guard or small forward could want in a shoe – quick response with more than adequate impact protection.

Again, nice job Nike. The leather quality is amazing given what we normally get (although there have been some great pairs lately, like the Maestro II and the Jordan X ‘Orlando’) – thick, soft, and durable. This is everything a sneaker used to be. The leather is so good it’s almost a shame to have to talk about anything else – and yes, the panel over the medial ankle “monkey paw” is a vinyl synthetic, but so was the original, so it matches.

The midfoot features a legit, real carbon fiber shank plate and that thick 90’s rubber traction. The inner 3/4 sleeve is a ventilated neoprene that hugs the foot just like a brace while the ankle is thickly padded, especially on the monkey paw side.

One thing to note. The OG Black/White-Canyon Gold  colorway features a soft synthetic build — like felt. Not exactly what we consider premium like the pair we tested for review and the ‘Sonics’ edition. Just a heads up for anyone wanting a pair, but with a quality build. Go for the OG White/Black or ‘Sonics’ — at least until we see more colorways release.

It is amazing that 20 years ago Nike pioneered a technology for basketball that is still basically in use today. While the ratchet system on the Zoom GP isn’t the exact same as the Jordan 33, it is close enough that the similarities can’t be ignored. Both feature non-traditional lacing systems that provide supreme fit, but the Zoom GP still has a lacing system under the shroud. Once laced (the lacing pulls the shroud over the tongue/sleeve), the strap of the ratchet goes into the buckle, and the latch tightens the shoe down. Once tightened, there is no movement at all from front to back or side to side. Lockdown is complete and no matter how hard I played, the ratchet never came loose, meaning fit was great from start to finish.

As for sizing, go true to size. I’m normally a 10.5 in every shoe (except some adidas) and the 10.5 left me with about a thumbs-width in length to the end of the toebox. Wide-footers could probably get away with TTS, but may want to go up a half. Don’t worry – the lacing, strap, and padding will still lock you in.

Let’s be honest – this is a low-riding, fast guard shoe that feels like a lowtop. Support is… well, it’s great. Starting at the bottom, the sole is wide, especially in the forefoot, with an almost full-length outrigger/angled midsole for lateral stability, to keep your foot upright and solid, and it works. The angle gives you a solid block to push off of when sliding lateral and staying in front of your man on defense or to get shifty on your drives, never slipping out and keeping your foot in contact with the floor and moving.

There is no raised sidewall for containment but that is no issue – the way the ratchet pulls the upper around your foot keeps any lateral movement to a minimum and you can actually feel the upper working while playing, holding tight on every motion. The midfoot is protected by the carbon fiber shank, keeping the midsole from bending and flexing in any way that would injure your foot. Put that together with the low ride and you have a solid, stable shoe.

Moving into the rear/heel area, the lockdown keeps all heel movement away, nowhere near your foot, and the sculpted padding and thickness of the ankle collar work with one of Nike’s forgotten technologies – the monkey paw we talked about earlier. If you don’t know, the monkey paw is a TPU structure hidden on the medial ankle panel that spreads like fingers from the sole to the upper lining. This structure is meant to keep your ankle from inverting, or “rolling”, while playing, and whether it works or not or made me think it worked, I had crazy confidence in every move. Bring this one back, Nike.

Every once in a while Nike gives us a retro that is so close to the original it is scary, and the Zoom GP is that shoe. From the materials to the cushioning to just the overall shape and feel, the Zoom GP is a foot rocket made for quick, driving guards and forwards. If you need a shoe that covers every aspect of performance, look no further. Even today, placed against shoes that are considered the “pinnacle of modern performance”, the Zoom GP more than holds it’s own.

It’s really kind of crazy – this may be my favorite performer of 2019 and it is a 20 years old shoe. Last year most “Best Of” lists had the Kobe 1 Protro as a top 3-5 performer, and it was 12 years old. Does this mean Nike isn’t making better shoes now, years later? Or that Nike was so far ahead of their time that the rest of the basketball world is just catching up? Maybe it is that all of us reviewers are just nostalgic and love the old-school construction and materials of the late-90’s and early 2000’s. I will say this – in 1999 the Zoom GP was my favorite shoe to play in and 20 years later nothing has changed. 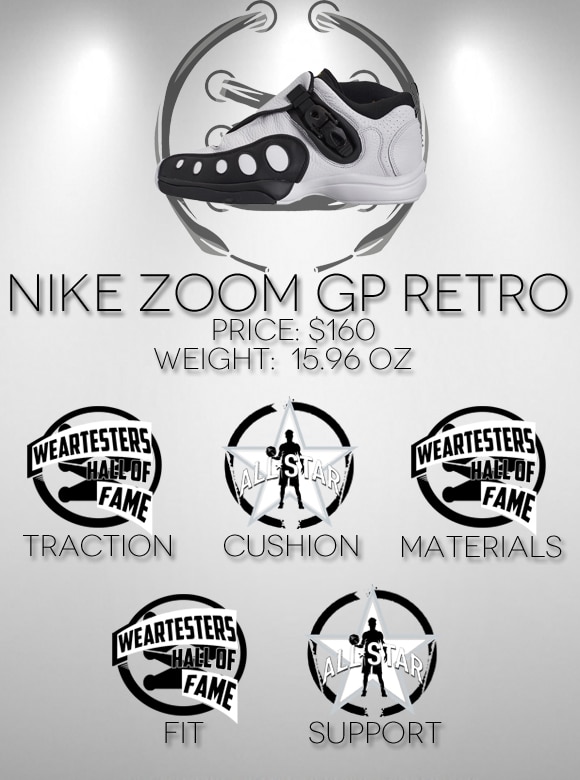