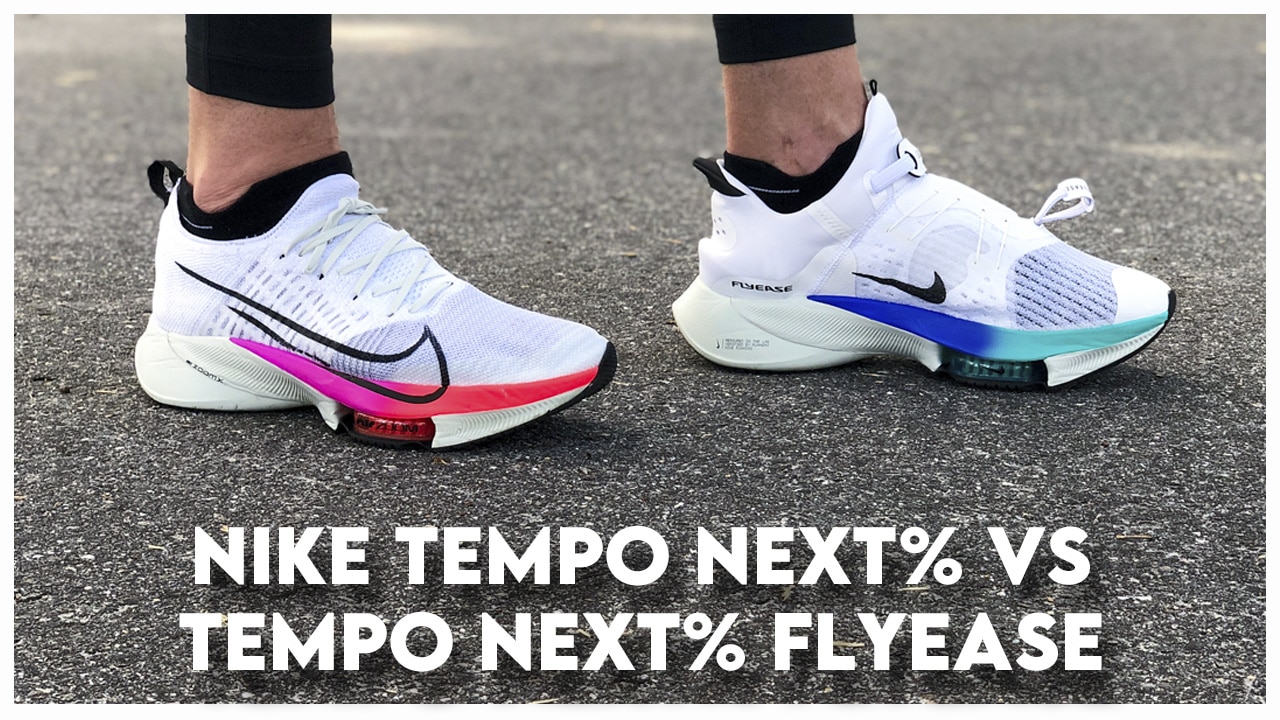 The Nike Air Zoom Tempo Next% is Nike Running top of the line daily training shoe and it comes in two varieties. Flyknit and Flyease. They’re the same price and both release widely in the US on October 1, 2020 (the regular Tempo Next% is already available at Nike). Which should you buy? Our Nike Tempo Next% vs Tempo Next% Flyease comparison highlights all the similarities and differences so you can make a decision.

To write this comparison, I ran a lot of miles in both shoes. I ran everything from easy miles to tempo (ahem) runs, and speed workouts. I ran in the shoes separately and together. Yes you read that right, I wore the Tempo on one foot and the Tempo Flyease on the other foot for multiple miles. While I don’t typically recommend doing that with two different shoes, in this case, they’re similar enough that it worked.

The Tempo Next% vs Tempo Next% Flyease comparison will help runners decide if either shoe works for them. I’ve heard from many in our running audience that are considering one or the other. But at $200, most of our readers want more information before purchasing.

For those that want to go in depth on the Nike Air Zoom Tempo Next%’s performance, read the full performance review.

The Tempo Next% vs Tempo Next% Flyease is a comparison of essentially the same shoe with different uppers. The Tempo Flyease is bulkier and heavier but comes with one-pull lacing and a slick step-in heel. It’s also roomier and more accommodating for a variety of foot shapes.

If you’re buying one, I’d recommend going with the normal Tempo if possible. Most runners will be slightly bothered by the extra bulk and weight of the Tempo Flyease. If you’re an adaptive athlete, have a very wide foot, or usually wear basketball shoes, the Tempo Flyease is your best bet.

This is a strange comparison where personal preferences will go a long way to deciding which you like best. Feel free to tweet at me with specific questions and I’ll do my best to answer.