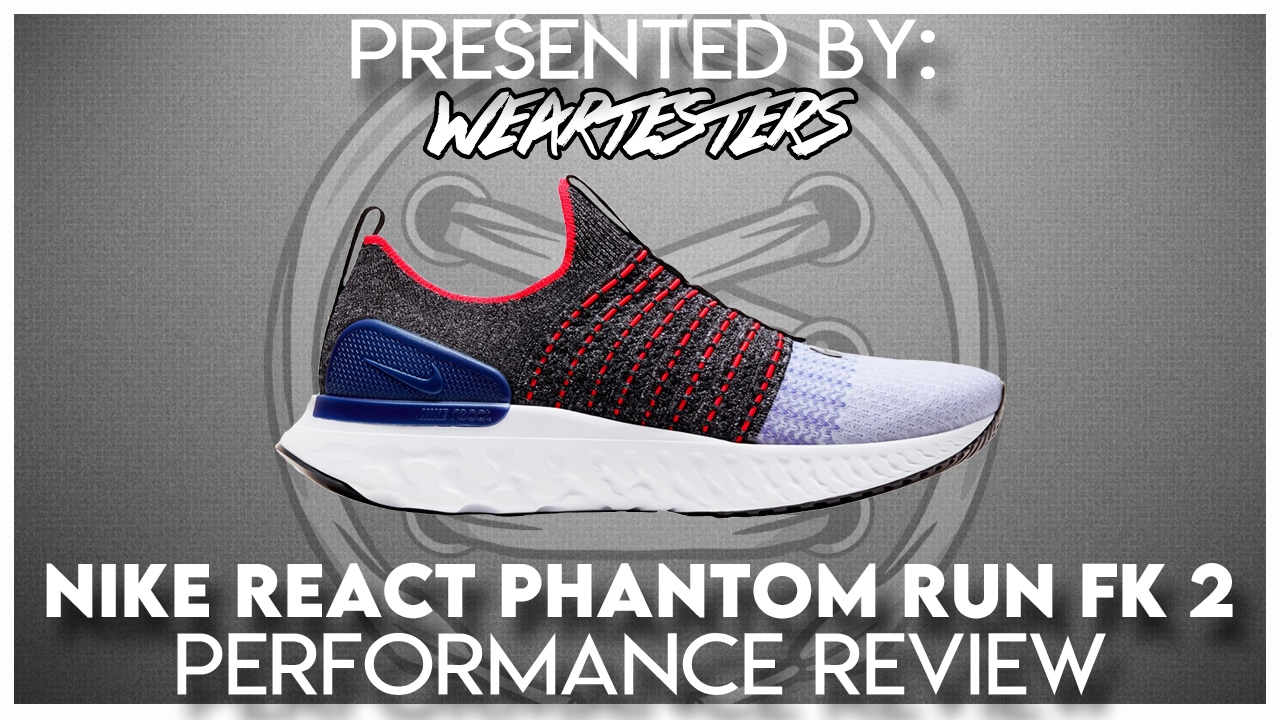 In January of 2018, Nike introduced a new lightweight, high-cushioned foam called React. Nike promised it softest foam yet and fans hailed it as the long-awaited answer to adidas Boost. Now, the ever-expanding quiver of React shoes adds a neutral shoe with an easy slip-on. For the Nike React Phantom Run Flyknit 2, Nike scrapped the laces but kept all that React foam.

This review is a guest contribution from Dan Forry. Dan is currently a collegiate runner at York College of Pennsylvania and a mechanical engineering student. He’s a long time watcher and reader of WearTesters. His previous reviews include a Nike ZoomX Vaporfly Next% performance review.

Nike placed Flywire cables across the arch of the shoe in a parallel horizontal formation. The Flywire holds the foot down well on forward motion, but does little with any horizontal motion. This structure is sufficient for distance runs but if you try to make a sharp turn, your foot slides over the side of the shoe. If you’re running downhill, your foot slides into the front of the toe box. The lack of good midfoot lockdown makes the Phantom Run 2 an ineffective shoe for lateral drills and fast footwork.

The heel lockdown also suffers from not having laces. This is caused by a lack of structure at the base of the ankle. The segmented heel cup does make up for some of the instability, but is not enough to compensate for the uneven pavement you can experience during city runs.

Nike uses 100% Flyknit on the upper. Nike has used Flyknit on performance running models since 2012. The forefoot is FlyKnit Loft. FlyKnit Loft uses a screen mesh as the top layer.

The Flyknit on the arch and heel is a traditional thick knit. It’s not all that breathable in humid weather and my foot got pretty sweaty. I wish the FlyKnit Loft was present in the midfoot as well. The traditional Flyknit also stretches too much. This isn’t ideal due to the Nike React Phantom Run Flyknit 2’s lack of laces. That stretch is just too much in a shoe without laces.

I wear an 11 in React Flyknit models and most Nike shoes. The Infinity Run was a bit too wide for me. The Phantom Run 2 is a better fit for me and I went true to size.

Be careful, because if you don’t get the fit just right, the small bit of support you do get will be compromised. Due to the lack of laces, I would recommend trying on the Phantom Run 2 in store. And if your only option is ordering online, luckily Nike has a great return policy. This is one of those shoes where the upper will either work well for you or it won’t work at all. Don’t be afraid to return them if the fit isn’t how you like it.

The Nike React Phantom Run Flyknit 2 is another shoe in Nike’s Flyknit arsenal. In Nike’s lineup, it’s a slimmer, more casual version of the Infinity Run. It’s stylish with a nice design.

The design does compromise performance somewhat. The cables don’t provide the secure fit or performance of laces. Personal fit preferences will determine whether you love it or hate it.

The Phantom Run 2 is good for straight line running but any quick cuts or explosive moves will likely cause you to fall out of the shoe. So be sure to use it as intended 😀.

Nike was not given any editorial control of the review. This review is based on our weartesters’ experiences using the shoes for speed workouts, trail runs, long runs, casual wear, and more.