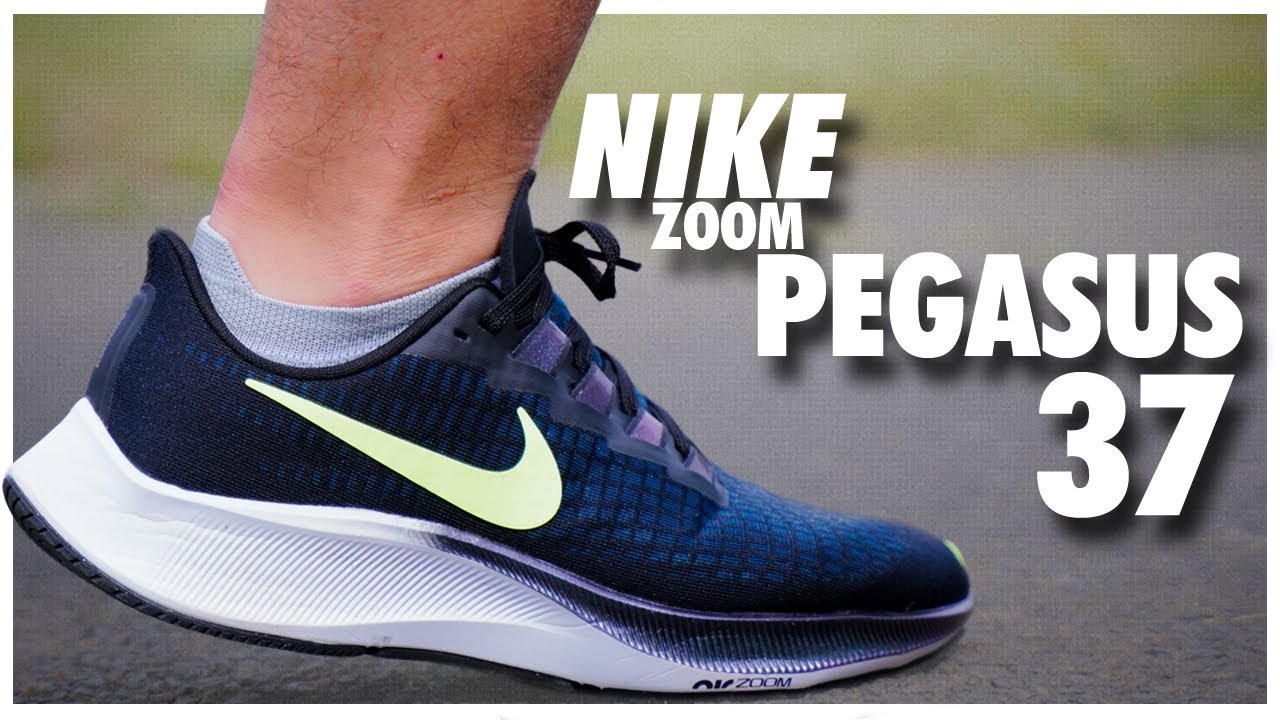 The Nike Pegasus 37 releases April 30, 2020. The Pegasus line has a great reputation and is seen as one of running’s most consistent and dependable shoes. Every year, runners look forward to the new Pegasus. They’re generally excited because Nike has a good track record improving the Pegasus line. The last 5 years have seen a ton of evolution in the shoe with the Pegasus 35 and Pegasus 36 becoming two of the most beloved shoes in the entire 30+ year history.

This year, I have the Nike Air Zoom Pegasus 37 in hand and ready to wear test ahead of its launch next week. Since I received the shoes, I’ve had time for a short run and some quality “modeling” time in front of the camera. Here are my initial thoughts and some detailed images:

While the pattern of the engineered mesh upper has been changed, the upper feels almost exactly the same as the Pegasus 36/35. This includes the heel counter and lacing structure.

Like the past two Pegasus models, the heel collar flares away from the Achilles to help avoid hotspots. It’s a no brainer touch that now appears on a bevy of running shoes across multiple brands. Inside the shoe, the insole is Nike’s standard running insole, and though the words/designs on the insoles have changed, the materials and construction are the same.

The laces no longer wind their way through flywire, instead going through easier to use fuse lace loops that connect to a midfoot strap that underlays the engineered mesh upper (much easier to see on lighter colorways). This doesn’t change the shoe’s on foot feel much, although it may affect side to side support on bumpier roads or trails. I’ll find out as I test the shoe.

The laces are the exact same material as the Pegasus 36. Below the laces, the engineered mesh tongue is integrated with the upper and it’s the exact same shape and thickness as last year. If prefer thick, plush tongues, you’ll need to look elsewhere. It appears Nike is eschewing beefy tongues across all their flagship running models.

Running in the Pegasus 37, the upper felt exactly how I expect a Pegasus to feel. I loved the Pegasus upper the past couple years so I’m glad they didn’t tinker too much with an already good thing.

The biggest change on the Nike Pegasus 37 from the Pegasus 36 is the cushioning setup. Last year’s model featured a Cushlon ST midsole with a full-length Zoom Air unit. The cushlon and zoom combo is generally fantastic and rightfully beloved by many.

However, recent Nike models, like the Nike Vomero 14 and Jordan React Havoc, have used a React/Zoom combo as a sort of cushioning level up.

In the Pegasus 37, Nike used a full-length React midsole with a top-loaded, articulated forefoot zoom bag that’s over twice as thick as last year’s bag (4mm to 10mm!). The Zoom bag’s air pressure is also tuned differently for males and females. Women get a softer 15 psi while Men get a stiffer 20 psi. This air pressure change was implemented due to runner feedback. I’ll be interested to see if the general public can tell the difference.

In my first run, I felt the increased size and flexibility of the forefoot zoom bag. It has a nice bounce and helps fight forefoot fatigue. The React midsole felt a little stiffer than other React-midsoled shoes I’ve tested. Perhaps it’ll break in but it initially felt stiffer than the Nike React Infinity Run or the Vomero 14.

The midsole shape is also tweaked to more closely resemble Nike’s flagship racing shoe, the Nike ZoomX Vaporfly Next%. Personally, I like the new shape with it’s swoop of color at the front and exaggerated heel. I imagine there will be some that don’t like the new look but it doesn’t affect performance.

Finally, the outsole is slightly tweaked. The rubber compound is the same, but the main traction pattern now uses squares and rectangles vs the pentagons used on the Pegasus 36. There’s also a flex groove that snakes across the entire forefoot (instead of only the lateral side). I couldn’t really notice any difference in the outsole from the 36 and that’s a good thing. It means we should be getting really good traction across all conditions like in year’s past.

The Nike Pegasus 37 fits true to size and features the Pegasus’ traditional 10mm drop. Its stack height is about 6mm higher and it weighs about half an ounce more than the Pegasus 36. Neither of those differences change the way the shoe feels on foot.

Overall, the Pegasus 37 feels a lot like the 36 and 35. The cushioning tech is the biggest change, and while not having full-length Zoom may take some getting used to, the overall package is (so far) just as good as previous Pegasus iterations.

Check back soon for our full performance review.