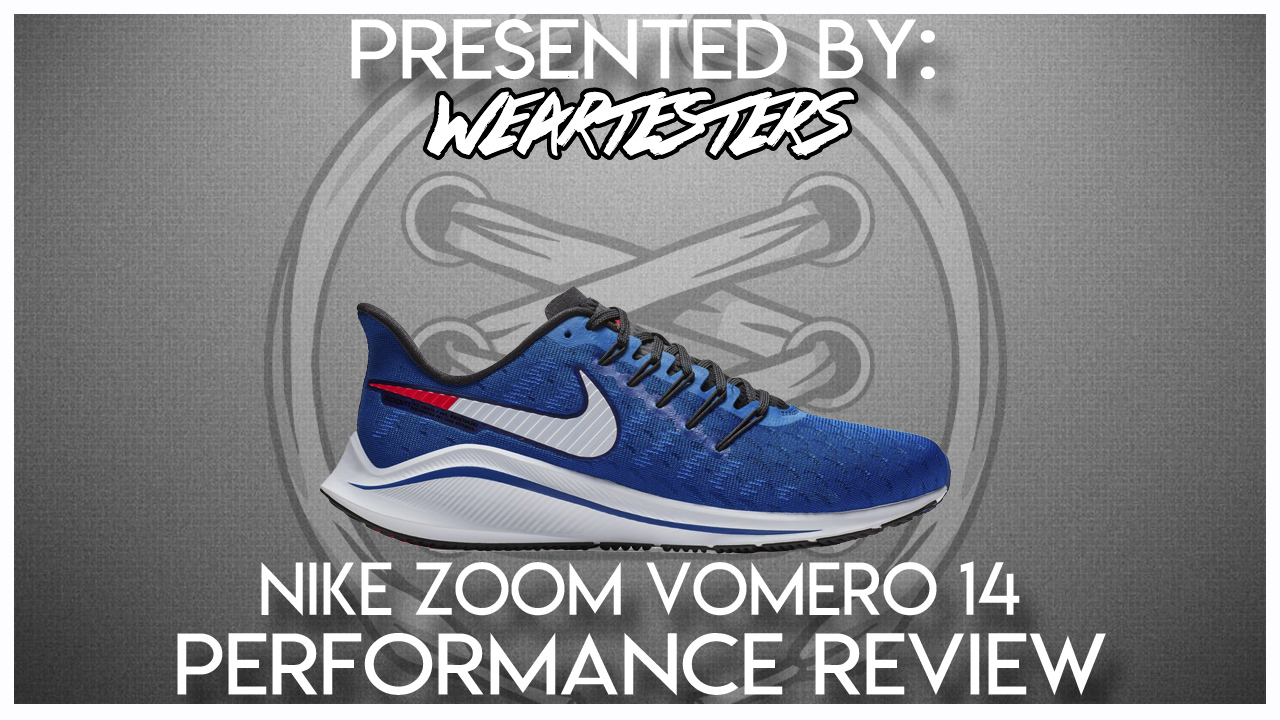 Nike improved a classic model by going next-level with the cushioning. Read on for our Nike Air Zoom Vomero 14 Performance Review.

Someone at Nike must have sat down and thought, how do I pack as much cushioning as possible into one of our classic running shoes? There’s no other way to explain the Nike Air Zoom Vomero 14. I’m glad this theoretical Nike employee ended up pairing React with a full-length Zoom Air unit because it results in a wonderful running experience for your feet, ankles, knees, and back.

For this review, I ran over 100 miles in the Nike Air Zoom Vomero 14, including a 10k race through downtown Orlando. Let’s review how the shoes performed over all those miles…

As I mentioned above, the cushion setup is wonderful. Super soft landings every time. Bouncy React surrounding the pillow-like Zoom Air bag. Although my experience was great, I did experience some unevenness with the foam in my right forefoot on the initial few wears. This was echoed by Instagram DMs from readers who experienced the same with their pairs. Essentially, the React seemed to pile up right around the front end of the full-length Zoom bag. It felt like three or four small bumps under my middle toes. It was annoying, but it dissipated 2 miles into each run. The bumps returned for the first five or so runs in the shoes but always went away as the shoes heated up (as weird as that sounds). After those first five runs, the bumps went away completely. Not everyone I talked with experienced this issue, but if you’re trying it on in store, you’ll want to make sure your pair doesn’t have that issue. I’m fairly confident that even if your pair has the issue, it will go away, but it’s better not to have to deal with it.

It’s a fairly standard fit for Nike running shoes. True to size with sufficient room in the toe box for toe spreading, then narrowing through the midfoot and heel. The heel features two nicely sized achilles pillows. The rear collar of the shoe flairs out to (1) avoid any blistering due to seams along the collar and (2) look trendy because flaring out the rear shoe collar is super-in right now (not that I or anyone here at WearTesters minds when something that is performance oriented is fashionable — that’s actually the best-case scenario for us). The tongue is thin but cushioned enough that you shouldn’t feel any lace pressure. The laces are a rougher fabric that stays tied, but it makes tightening the laces a bit of a pain. They’re not the stretchy laces that have become more popular on running models. I would’ve preferred those laces on these shoes. The lacing system itself is Dynamic Fit. Your midfoot is secured from the connection of the lacing system to the midsole. It’s that hug that Dynamic Fit has provided since Nike first began using it 5–6 years ago. The mesh upper stretches a bit, so wide footers should feel confident in getting their normal size. Offset is on the high side, similar to most Nike runners, at 10mm. You’ll sit at 22mm in the heel and 12mm in the forefoot.

A standard internal heel counter is included, but the real source of the support is sitting slightly below the top of the React midsole carrier. The midsole wraps up in three places: the medial, lateral, and back sides of the heel. Basically, your heels sits inside a three-sided roll cage that keeps you upright on uneven ground. Combine that with a widened base on both the lateral and medial side of the forefoot and you get better support than most neutral-cushioned running shoes. I think they increased the support in case the React/Zoom Air cushioning combo was too soft for some runners. Whatever the reason, you get more support than usual.

The divided outsole features a repeating hexagon pattern below the inside of your foot and a parallel-line pattern along the lateral side. The two sides of the outsole are separated by a large flex groove that allows the React to expand on every footfall and gives the wearer a lot of flexibility that’s useful on trail runs and other uneven terrains like cobblestone. The rubber on the lateral side is fairly stiff. Even after almost 100 miles it’s not breaking down very much. It’s also reinforced near the heel to up the durability for all the heel strikers. The hexagonal pattern on the inside of the foot is made with a softer rubber, but each hexagon is fairly thick. I’ve worn about 1/3 of the way through with almost 100 miles of running and a bunch of walking on asphalt and concrete. The hexagons do really well gripping the pavement and multiple runs in driving rainstorms didn’t change that. Slippage was nonexistent and I had secure footing amid a lot of water.

Mesh everything. It’s the number one material in the running world and the Vomero doesn’t stray from the formula. The mesh is much finer and not as open-celled as a lot of running shoes on the market. The finer mesh provides a cleaner, silkier upper while still offering a solid amount of breathability. The upper is seamless, which severely reduces the likelihood of hot spots. The materials are made for step-in comfort. If putting them on and immediately being able to run 5+ miles was the target, Nike nailed it.

At $140, the Vomero 14 brings the best cushioning in Nike’s running line and firmly competes with running classics like Mizuno Wave Inspire, Asics Gel Nimbus, and Brooks Glycerin. The Vomero 14 features an impressive cushioning setup. If your decision for your everyday running shoe places a high premium on cushioning, the Nike Air Zoom Vomero 14 should be on your short list of candidates.