If the video is not available then the upload has yet to be completed. For those of you who frequently visit my site, I have made the written review available to hold you over until the video has completed its upload. I appreciate all of your continued support! 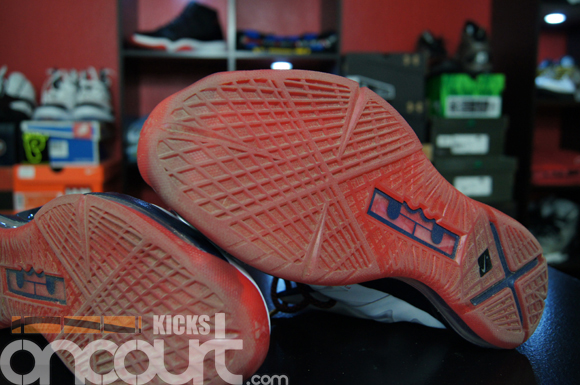 Traction – The traction is the best we’ve had on a LeBron in quite a while. Court coverage is abundant and it’s featured throughout the entire outsole all the way to the edge. From a front to back standpoint you are pretty much covered no matter what… jump stops, jab steps and quick hard stops are solid without slipping or hesitation. Cutting and curling coverage could be a bit better but I’m almost positive that is due to the overall construction. With the cushion setup you aren’t going to receive the most flexible ride so you just have to deal with what you are given. I’m sure that Nike will continue to innovate & expand the new cushion tech to offer wearers more flex in the future so just sit back and wait to see what happens. 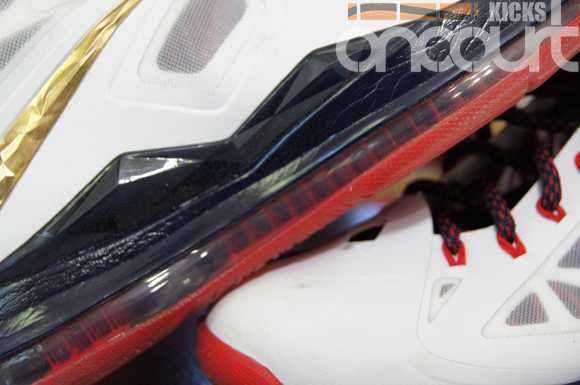 The heel feels just like a regular Air Max 360 unit but once you begin to run & jump you will see where the Zoom Air/ Air Max combo starts to fit into place. It’s almost propelling in the forefoot and is just incredible. There were some minor stability issues along the outrigger – more pillars in that location would have been useful – but overall it’s a great new setup that offers you the best of both worlds. 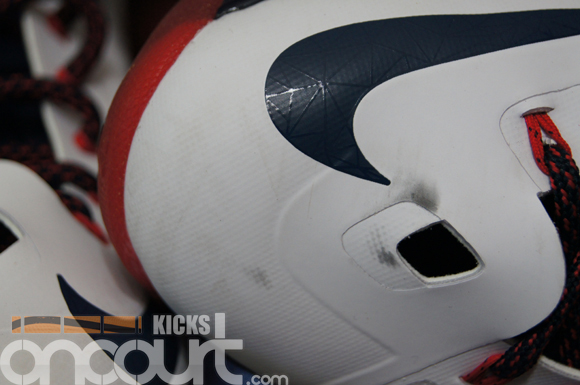 Material – The Fuse is thick yet flexible. Durability isn’t an issue – as we have come to expect. One positive to take away from their larger price tag – $180 for the regular & $290 for the Nike+ version – is that they will last you a while. Break-in time isn’t really required here so that is something most of us will come to appreciate. I remember when they first used Fuse on the LeBron line with the LeBron 8 P.S… this is nothing like that stiff and rigid Fuse, this time around Nike has made the plastic based material feel almost luxurious. 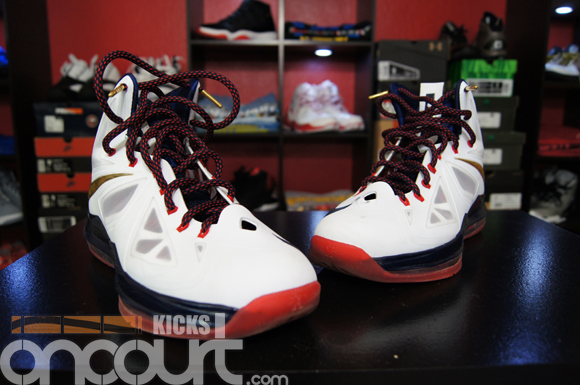 Fit – If you have the Hyperdunk 2012 – or have at least tried it on – then that is what you can expect with the LeBron X. They are true to size but pretty snug so if you don’t like to have the upper wrapped around your foot – I personally love it – then you may want to go up ½ size.

Lockdown is apparent once your foot is inside the shoe… and you won’t even have laced them up before you noticed. From heel to toe, you receive one of the best overall fits any sneaker can provide without chaffing or hotspots, much like the Hyperdunk 2012. The Dynamic Flywire works in tandem with your movements as each set of cables adapts to your game while in motion. Dynamic Flywire really does make the older Flywire seems outdated and it wasn’t introduced that long ago. 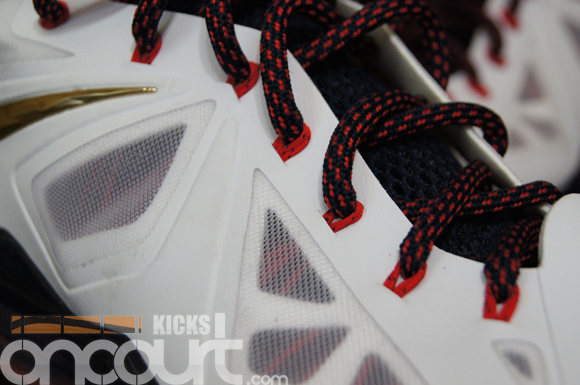 Ventilation – The ventilation is nice. Above average but nothing to write home about, however, it’s definitely better than the LeBron 9 & LeBron 9 Elite. With the way that most brands are making their hoop shoes – lighter, brighter and more ventilated – you sort of begin to ‘get accustomed’ to the whole air flow thing; so if it isn’t breathable you have something to complain about while if it is breathable then it’s not really a ‘special feature’ any longer. 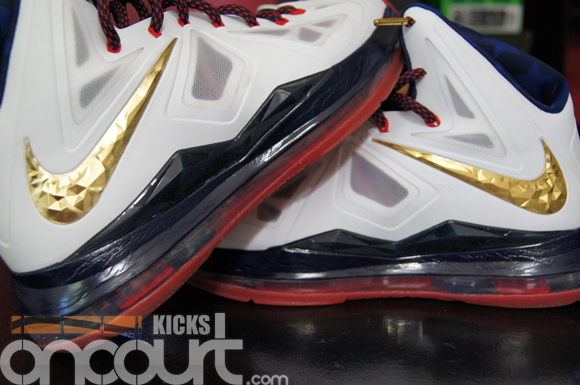 Support – The support is available but not restrictive. You can’t really feel the TPU plate supporting your foot or arch but that is mostly due to the shoes lack of flexibility. It’s the shoes fit that really lends its support to the wearer and that is noticeable and welcomed. As stated above, the only thing I would have liked to have seen is more support columns within the Air unit itself along the outrigger. I think that would have helped the overall stability of the shoe thus offering you a slightly more supportive ride. 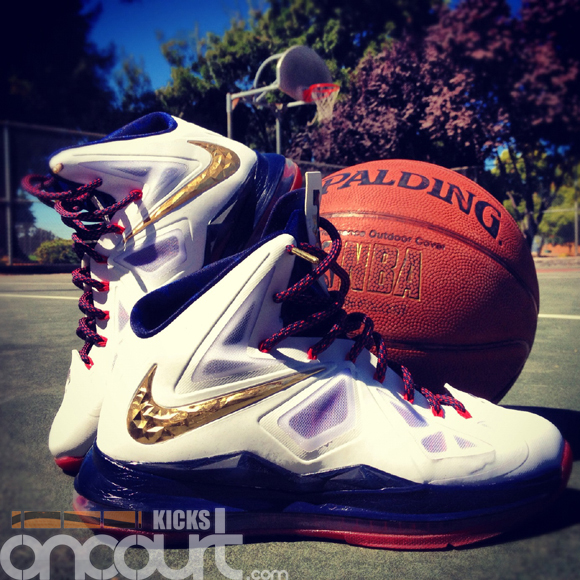 Overall – The LeBron X is the Air Jordan XI for this generation. If you don’t understand what I mean then allow me to explain a bit…

The AJXI had features we’ve seen before – Phylon midsole & full length Air cushion – but the Phylon was lighter in weight than the previous model – AJX – and offered a softer ride. Then you get to the tech upgrades. Carbon Fiber was introduced to a basketball shoe for the first time, something that is now expected. Patent leather was used for the first time, not just because it was shiny but also because patent leather is a bit more durable than regular leather – if you don’t believe me then play in the Jordan Melo M8 for a while… you’ll thank me later. Ballistic mesh – I’ve heard it called other names but this is what I’m sticking with – was used along the upper… it wrapped around your foot perfectly – just like this new Fuse they are using in the LeBron X – and reduced weight. Lastly, it was the most expensive model in the Air Jordan lineup at the time, retailing for $125.

The Air Jordan XI set the standard in 1995 for what we received throughout the rest of the 90’s and most of the early 2000’s as far as basketball performance footwear is concerned. Now we have the LeBron X… this is where Nike is dumping their latest and greatest tech. LeBron’s most recent signature is the most innovative and technical piece of sports equipment the footwear world has ever seen… they’ve just raised the bar and from now on we will see sneakers made that are trying to catch up… just as Nike had done back in 1995 with the Air Jordan XI.

Are they worth the extra money for the Nike+ version? I said this during the Hyperdunk 2012 review and I’ll say it again… not unless you are going to become a professional basketball player. The Nike+ system is not useful to the average ball player.

Are they worth the $180 price tag that will be on the non-Nike+ version? That’s up to you… Nike is a luxury brand. If you can afford luxury then go for it but if you can’t then you will get by just fine with a $50 pair sneakers found at the Nike outlet or some other discount store… trust me, I have firsthand experience with this and I got by just fine. 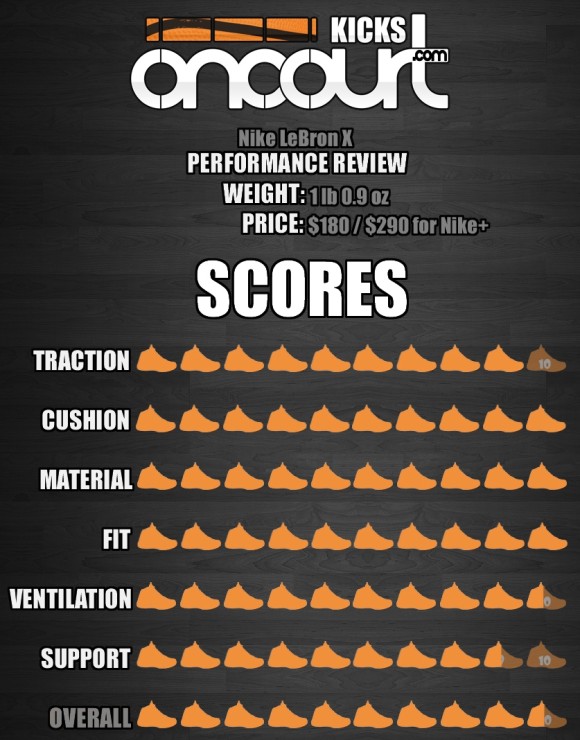