Nike and LeBron James have unveiled the latest in the LeBron line, the Nike LeBron 14. Now, WearTesters gives you our thoughts on the shoe’s on-court performance. The Nike LeBron 14 Performance Review is here.

Traction – For using translucent rubber, the traction on the LeBron 14 wasn’t half bad. Granted, the traction was one of the shoe’s weakest points — but the traction wasn’t horrible. The digi-camo pattern gripped well but there are tiny areas that have been cored out and dust will collect in those areas rather quickly. Keeping them clean is a must if you want to maintain grip on-court.

This rubber compound Nike decided to use is what helped maintain traction in between wiping because it’s fairly soft and a bit tacky. There is some fraying of the rubber in high-wear areas for my foot strikes and movements which reveals a fresh new layer of rubber under it. This is great for always having fresh rubber on-court. Of course, if this fraying were to happen on an adidas model then all hell would break loose — but since this is a Nike shoe we’re going to let it slide completely. Yes, major sarcasm right there.

Fraying of rubber is normal for basketball shoes in today’s era, especially when it comes to translucent rubbers. No, it won’t destroy the rubber on your shoes within a matter of days. That’d be a bit dramatic. However, the pattern itself — coupled with this rubber compound — could have (and should have) been better.

Had the pattern made a bit more sense with its design — like the Nike PG1’s pattern — then these would have been much greater than they were. Again, the traction wasn’t horrible by any means and you’ll receive decent grip out of them. It gets the job done for sure. It just could have been better with perhaps a more simplistic approach.

Cushion – Hex Zoom Air returns, but this time around the units are larger than ever before. The three Hex Zoom units seen above are roughly 14mm thick — that’s a huge Zoom unit. Remember the Melo M8? Yeah, it was awesome. It featured 10mm Zoom units so having 14mm — while not a drastic change — is freaking awesome.

Can you feel the Zoom? Sometimes. Your weight is evenly distributed between each unit, they’re encased in rubber, and they’re bottom loaded, so they don’t compress in the way that you might want them to. However, the protection they provide upon initial impact is great and since the 14mm doesn’t compress much upon foot strikes you’re able to maintain a much quicker response time between movements than you would if you sunk into the cushion. It isn’t a perfect blend of court feel and cushion since you do sit slightly high atop the tooling, but for a larger player it will feel like having a guard shoe on without sacrificing any of the cushion that they may want/need.

The heel Zoom unit is pretty self explanatory. That mofo is HUGE! Same thing applies though. It’s encased in rubber and it’s bottom loaded. It isn’t compressing to the point where you’ll be unstable, just enough to where you can tell your body isn’t taking the brunt of landings.

Side note: I love the flex grooves throughout the outsole. They allow for greater flexibility which is great for someone of my size. I’m far from an NBA-sized athlete and LeBron models have always felt a bit restrictive in terms of fluidity and mobility. They’ve been tweaking this type of setup since the LeBron 12 and this is the best version yet. These truly feel like a guard shoe made for a big man.

Materials – This is where I start to confuse myself when I think too much into it. I like the materials used but I don’t feel that my $175 was justified. Yes, I bought these with my own money, and the shoe is made of foam and mesh overlays. I love the tiny rand of nubuck — some colorways will offer leather — on the toe, but the majority of the shoe is made of materials that I know aren’t costly. Again, I like the materials. I just don’t like having to pay $175 for this type of material. The Zoom Generation Retro retailed for the same price and offered a leather build. This thin foam can’t possibly cost just as much to use.

In terms of actual performance, the foam and mesh build do its job well. It’s flexible and moves well with your foot without feeling overly restrictive. If you played in the Zoom Soldier 10 then it’s the exact same feeling. Some might not enjoy it as it could be too soft/flimsy for them, but I did.

Fit – The LeBron 14 utilizes a one-piece bootie construction comprised of soft/flimsy materials. In order to maintain the best containment while playing in them I’d personally recommend going down 1/2 size. Yes, your toes will be right at the tip of the shoe, but you greatly reduce the risk of dead space. I guarantee you that the last used to shape the one-piece upper isn’t a one-size-fits-all type of last. Every foot shape is different. Going true to size might work out well for wide footers and those with high arches, but for me, going down 1/2 size ensured I received a one-to-one fit.

Lockdown is surprisingly good. The lacing is weird as it relies on Flywire cables to secure your foot for lateral movements, but the strap does a great job containing your midfoot and heel.

Support – There are a couple of traditional support features in place on the LeBron 14 but this is one area that definitely could have been better overall. The internal and external heel counters do their job quit well, but the tooling caused some minor instability issues — mostly when stopping or trying to push off at the lateral forefoot. Its a combination of the materials being a little too soft — the fuse area doesn’t completely stop the forefoot from rolling over the footbed — and the tooling itself.

There is an outrigger but it isn’t big enough, and it’s almost rounded. When your foot pushes the materials to the point to where it begins to roll over the footbed then your momentum and added weight to the area will cause you to tip a bit. I tried not to apply too much force to that area but it isn’t always easy to do.

I would have loved it if my foot say within the midsole a bit. This would have stopped my foot from rolling over the footbed since it would be inside the footbed. I think they should have considered carrying over the jagged exaggerated outrigger they used on the LBJ 12 and 13. Those shoes were pretty wide and while they could slow you down a tiny bit, you had much greater stability in the forefoot area. If those two things could not have been accomplished then an independent toecap would have been very useful — as it was in the Zoom Soldier 3. It would have added depth to the design, it would have brought a premium material element as well if they decided to use nubuck and leather, and it would contain the forefoot upon lateral moves without negatively effecting the mobility of the player.

Overall – The LeBron 14 isn’t perfect, but no shoe is. Impact protection and overall mobility are two really great features of the shoe. Forefoot stability and overall containment upon lateral moves is something that is hopefully addressed with the Elite model. Traction wasn’t the best, but it wasn’t bad either; it’ll get the job done so long as you keep it clean.

If you’re a small player that wants or needs impact protection while still being able to move freely on-court then these should suit you well. If you’re a big man that needs the same thing then they should be an equally good option. I still can’t wrap my head around the $175 price point for a foam shoe, but that has absolutely nothing to do with the shoe’s performance so I’ll let the buyer be the judge when it comes to value per dollar.

I’m reluctant to say this is the best LeBron to-date, but it’s definitely one of the best to-date. 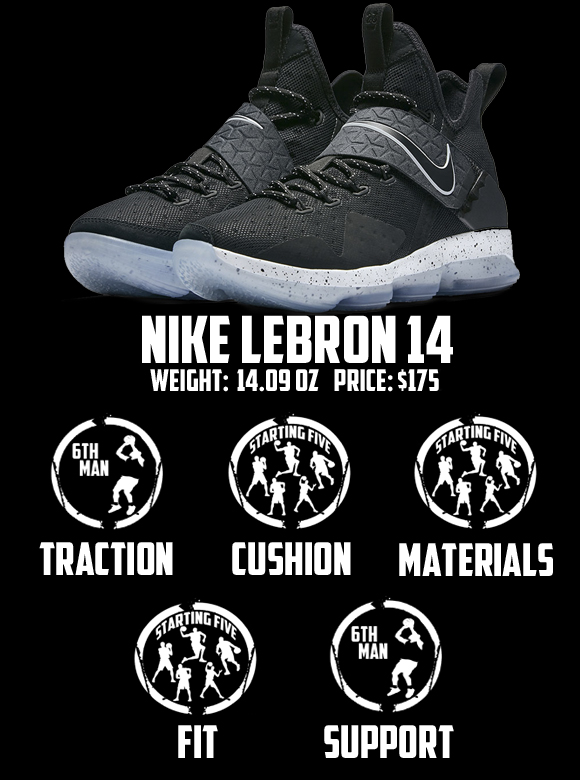