Is the Nike Kobe NXT 360 better than the Kobes of the past? We’ve got the performance review ready and waiting.

The Kobe NXT 360 is available now at Eastbay.com

Traction on the Kobe NXT 360 started out phenomenally — and I took the shoe to the worst court I play on right from the jump. For nearly two weeks I didn’t even need to wipe the soles whenever I played, dust or not, and that is rare for any shoe.

However, the extreme bite that the shoe started with hasn’t remained since I began testing it. The shoe is slowly losing some of its bite on court surfaces and the rubber is breaking off in my high-wear areas. While this is normal for an outsole over its lifespan in a player’s rotation, it is not normal for it to happen in just four weeks of testing. At $200 I’d expect the outsole to last, at the very minimum, three months before I start to see significant signs of wear and tear.

The last time I had an outsole grind down this quickly on me was with the first edition CrazyLight Boost 2015. Both shoes have produced very similar experiences as well; both had phenomenal traction to start with but slowly lost their ability to really bite the longer I used them.

This traction may be a deal breaker for some and it definitely means don’t take the Kobe NXT 360 outdoors.

React and Lunarlon make a combined appearance in the Kobe NXT 360 and it isn’t that much different from what we’ve been getting from previous drop-in midsoles.

React foam has basically replaced the Air systems you’d see installed in the heel and I think it’s a much more fluid ride once broken-in. The entire midsole reminded me a lot of the midsole that came in the Nike Kobe 11. It has plenty of court feel and responsiveness in the forefoot with lots of impact protection in the rear. I did not enjoy the extreme squish the heel offered at first — it felt a lot like the LeBron 11 midsole — but it quickly evened out to provide a much more balanced ride than before.

I think fans of the drop-in Lunar midsoles will enjoy the addition of React as it doesn’t take anything away from the midsole’s court feel and response. However, it’s able to add a little bit of extra comfort to a setup that some may have felt was lacking.

360-degrees of Flyknit was hyped up quite a bit, and while it’s cool, it wasn’t anything spectacular. If anything, the new technology speaks volumes on how much things have changed in the way shoes are made — but not on how they perform.

The Kobe NXT 360’s rear section of Flyknit is what I personally prefer from my knitted materials. Had that type of knit been from heel to toe then I would have likely loved the build. Instead, the toe was a thin, practically see-through layer of knit that felt like it was made up of fishing line — really strong fishing line.

Speaking on its performance only, I didn’t hate it. It worked well and did everything you’d come to expect out of a shoe — especially a knitted one. I still question its longevity, but my pair only shows dirt as a sign of wear vs rips and tears.

The Nike Kobe NXT 360 fits true to size. Being that the forefoot section of the shoe is practically see-through you’ll definitely know whether or not you know your actual true size. If you feel the shoe runs long then I suggest you measure your foot to ensure you’re wearing the size you think you should be. My toe edges up to the tip of the shoe which is perfect for this type of sneaker that is built on the thin/flimsy side.

Lockdown in the Kobe NXT 360 was very good — surprisingly good, actually. I didn’t expect this minimal shoe to really lock in at all but the way the midsole fills up the shoe, with your foot filling out the rest, you’re actually locked in better than some of the previous Kobe models. It isn’t quite to the level of a Kobe 5 or 6, but definitely better than something like the Kobe 10 or 11.

This is truly a shoe that fits and feels like a complete extension of your foot. One-to-one is the simplest way to describe it — if you know your proper size that is.

Support was one area that the Kobe NXT 360 lacked just a bit. Not enough to where I knocked down its score, but enough to leave me wanting a bit more for my $200.

The heel counter section of the shoe is its strongest support feature, as it should be. With the shoe contoured the way it is beefing up the security in the rear was essential for “ankle support” and heel lockdown. Midfoot torsional support was solid as well, but this is where I think a carbon fiber plate would have kept the weight down while retaining strength — and it would’ve made me feel like I bought a brand new $200 sports car for my feet. Lateral stability was a big worry for me with the way the shoe is designed to mimic your foot, down to the shape of its heel, because there is no traditional outrigger or wide forefoot base.

When I curl around a screen and stop as quickly as I can to get an open look I’m using all forefoot. Having a wide base that’s flat, firm, and supported is something I really look for, and while I did not receive that in this shoe, I never missed it. Again, the sneaker is designed to mimic the foot better than any shoe I’ve worn and that’s exactly how it plays. It’s like having feet strong enough to play barefoot…but it’s just your shoe.

The Nike Kobe NXT 360 is a next generation shoe if there ever was one. Back in the ’90s we had the Air Jordan 11 and then the Nike Foamposite. Today, there is the Kobe NXT 360.

The shoe offers enough of everything to keep a player on the floor comfortably. However, its lack of outsole durability could cause some to stay away (as if the $200 price tag wasn’t scary enough). The shoe is extremely fun to play in, which is something that isn’t easy to achieve.

There are many good/great performance models from every brand out there but they don’t all play “fun.” It’s a feeling that’s hard for me to describe but if you’ve ever had one of those shoes that you just enjoy lacing up and getting down in then this is one of those shoes for me. Maybe it’s the fact that the Kobe NXT 360 is see-through, extremely lightweight, and supportive that makes it as fun as it is. Or it could be the bright yellow and purple — I’m still DubNation though.

If you end up grabbing a pair of the Nike Kobe NXT 360 then I hope you enjoy the shoe as much as I did — and I really hope it lasts you! Traction wearing down with each wear is frustrating but the upper has stayed strong, although it’s what I thought would be the first thing to go.

Thank you for stopping by, reading, watching, and commenting. We at WearTesters.com appreciate your continued support. Now get off your computer, smartphone, or tablet and get back on the court. Enjoy your time on the hardwood while you still can. 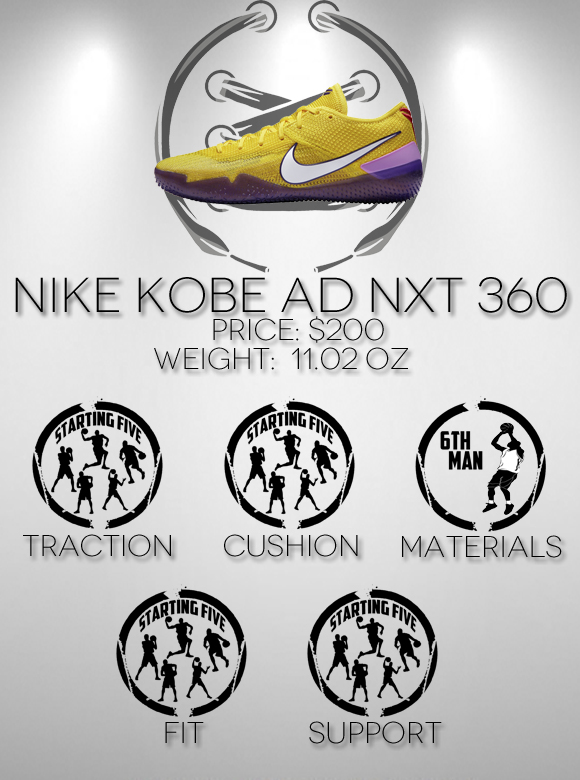