Traction – Despite sharing the same pattern as the Kobe A.D. — which, thankfully, is the only performance feature the NXT has in common with the original A.D. — the traction had no issues on any surface no matter the condition. If dust was present there would be some wiping needed periodically, but that’s normal.

This situation proves that Nike can create a translucent rubber outsole that grips. Why the brand doesn’t do this regularly is a question we’ll never have an answer to. Just know that the Kobe A.D. NXT’s traction will perform well for you — even if the original Kobe A.D. traction did not.

Cushion – Nothing new here, just the same drop-in midsole used on the Nike Kobe 11 — a large volume heel Zoom Air unit coupled with a Lunarlon midsole. Everything works well, providing you with ample impact protection in the heel while keeping the forefoot cushioned enough without losing any court feel. If you’ve never been a fan of this setup then you likely will have similar feelings here. However, if you are a fan of this setup then you’ll probably be overjoyed that it has returned after the more traditional approach the Kobe A.D. went with.

I’ve said this before, but I’ll say it again just in case anyone wanted to know — you can swap out your midsoles from the Kobe 11 with the Kobe A.D. NXT. If you happen to have any of the other options that were offered with the NIKEiD service then you can potentially have a full-length Zoom Air equipped version of the NXT, and if you own the Kobe Mentality 1, 2 or the Mamba Instinct then you can easily swap the midsole out for full-length Lunar. Whatever your preference is, it can pretty much be accommodated if you buy Kobe shoes each season.

A common negative aspect with drop-in midsole systems such as this is that the heel to toe transition can be pretty clunky. That is definitely the case with the NXT but if you’re able to stay on your toes then you will likely bypass this problem. The Air Jordan 2011 offered the smoothest heel to toe transition from any drop-in midsole setup that I’ve ever used so I hope the Kobe line can eventually get to that type of feeling; it makes the wearing experience a little lighter on-foot.

Materials – While the NXT and regular version of the Kobe A.D. are stated to have very similar materials, they don’t feel similar at all. The Kobe A.D. offered a super stiff mesh textile that wasn’t breathable. Meanwhile, the Kobe A.D. NXT offers a mesh textile build that is very breathable. The shrouded overlay is a knit material that seems to have some TPU threading throughout for reinforcement.

I loved the switch up of materials and my feet appreciated the change as well. This setup moved with my feet rather than rubbing/chaffing them and remained durable and supportive.

Fit – The fit is a bit strange as I wound up going up 1/2 size due to width (which very rarely happens to me) but the length feels pretty true to size. If you have slender feet then going true to size will likely offer the best fit. If you have normal feet then you’ll want to try these on before dropping $200 on them because the width can be a bit suffocating. Widerfooters, I’m sorry, this shoe isn’t for you.

Lockdown is the highlight of the NXT and it is truly fantastic. Suffocating? Yes. However, for those that enjoy that really snug feeling on-foot then you’ll likely enjoy the hell out of these. They’re sort of comparable to the Kobe 5’s fit except in the toebox. The toe in the NXT has a bit more volume above the foot and doesn’t sit directly on the foot as the Kobe 5 had, but it’s the best comparison I can give you.

The shrouded area and “new” lacing system that was originally featured on the ’90s-era Nike Air Money is, well, money. You can’t see it, but the entire shoe is a one-piece upper with the shroud sitting atop the foot. This lacing system is directly tied to the shroud which locks you down and into the medial and lateral sides of the shoe. It’s almost like a straightjacket for your feet. The lace lock is the only way to “tie” your shoes, which is strange, but it actually worked and never loosened up on me. Tuck the rest of the laces into the the side panel lacing or rear bungee — otherwise, they’ll be flopping around and annoying the hell out of you.

Heel lockdown is solid. Virtually the same as the past two models — Kobe 11 and A.D. — where your heel is perfectly contained and supported.

Support – Due to the wonderful fit and lockdown, support is fantastic. You sit low to the ground so stability is great while the overall containment (from the fit) is wonderful. The NXT does not feature a shank plate but I never noticed any issues while playing. The rubber shell that makes up the outsole seems to act like a torsional piece and it remains fairly rigid at the midfoot. Heavier players might feel differently than I, but I never felt like my arch was straining while playing.

Overall – Anything would be an upgrade compared to the Kobe A.D. Was this done on purpose? I don’t know, but I’m not really into conspiracy theories. All I know is that the NXT version of the Kobe A.D. has much more in common with the Kobe 11 than it does the shoe it’s named after — which is a good thing.

Traction and cushion are solid. The fit isn’t going to be for everyone, but for those that appreciate it, this may be the closest thing to a Kobe 5 reincarnation we can get until Nike decides to retro the shoe (in numbers that allow them to be attainable for the masses that would love to hoop in a pair again).

Every line has a hiccup or two and the original Kobe A.D. was one of them. The Kobe A.D. NXT rights the wrongs that the original put in place and has me wishing it was the successor to the Kobe 11 instead of what we got the first time around. Once it drops in price by a minimum of $50 then the Kobe A.D. NXT should be your next Kobe purchase for on-court use. 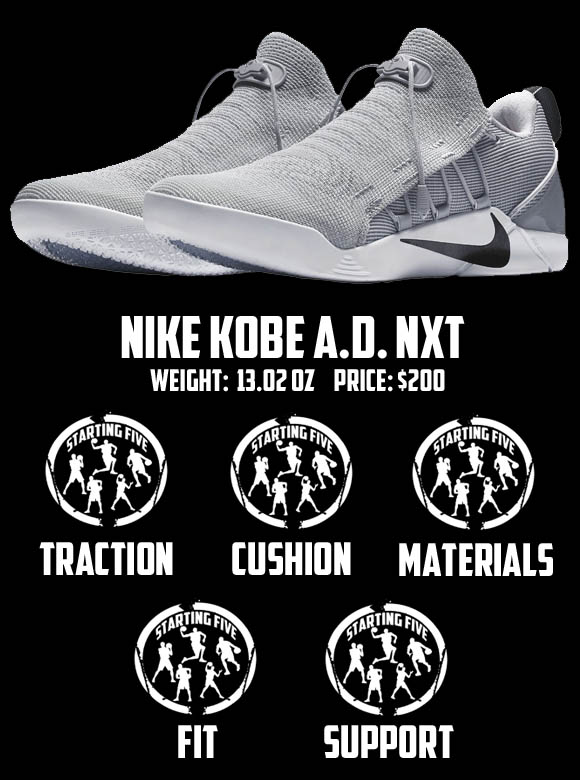