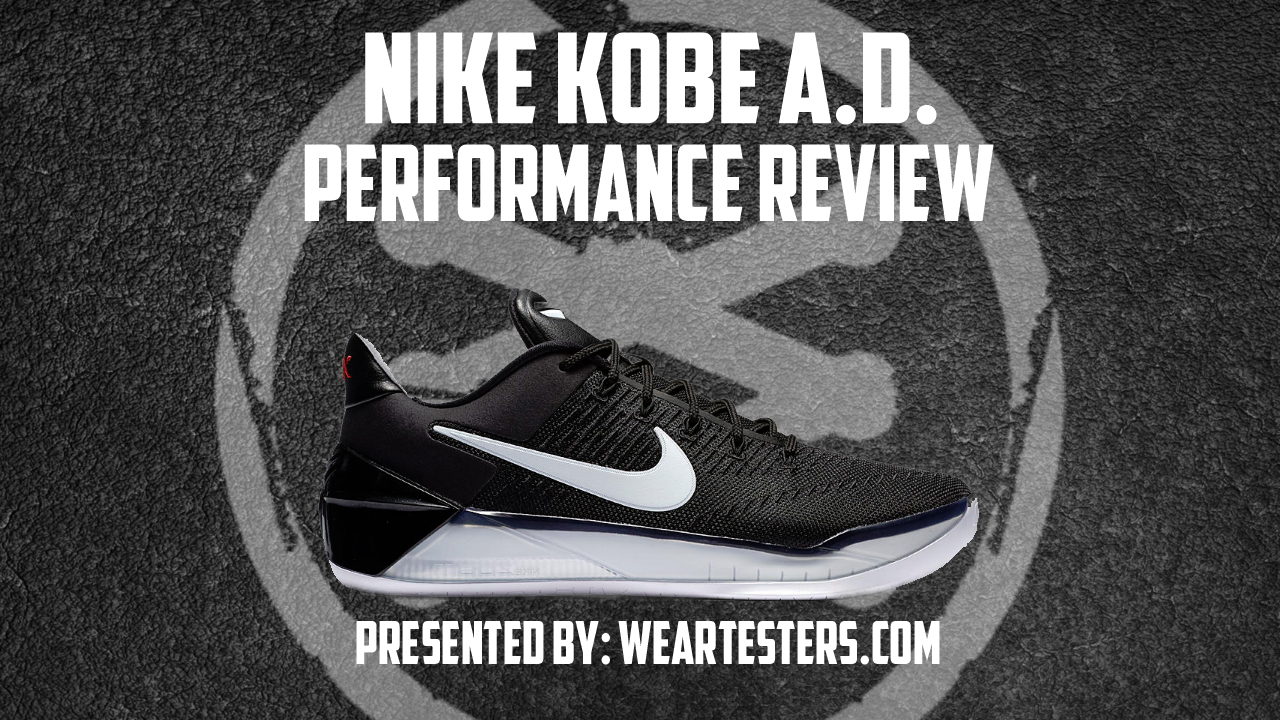 Well, these were disappointing…

Traction – Much like the Nike Kobe 11, the traction on the Nike Kobe A.D. was a hit or miss. We’ve been down this road numerous times now so we’ll just get it out of the way right now: if you end up grabbing a pair of the Kobe A.D., do yourself a favor and grab a colorway that offers you solid rubber.

I play on four different courts regularly and I had a different experience with the A.D.’s traction each time I played in them. When the traction worked, it worked really well. Those little nubs that are reminiscent of the Kobe X as they splay while in motion gripping and grabbing the court with every maneuver. You’d think that dustier settings would clog up these areas and make them slippery — which did happen sometimes — but that wasn’t always the case. Sometimes, I was glued to the floor and other times I wasn’t. When I’d stick, sometimes there was dust, and sometimes there wasn’t. Same with when I’d be slipping the entire run.

The Kobe A.D. reminded me a lot of my experiences in the Air Jordan 30, Air Jordan 31, and Nike Kobe 11 (translucent outsole version).

Again, when it was good it was awesome. When it wasn’t…well, it wasn’t. Solid rubber options seems work the best more often than the translucent rubber options (when dealing with a Nike or Jordan Brand shoe). If you want consistency within the traction then solid rubber should be a much better option.

Cushion – When I initially bought the shoe I thought we’d be getting a very similar setup to the Nike Kobe X. Not the best Kobe in terms of cushion, but they were definitely not the worst. Tech specs were stated as — and this is a direct quote:

“Down below, the Kobe A.D. is equipped with a translucent midsole sidewall, exposing a Lunarlon midsole and a Zoom Air unit in the heel for maximum responsiveness, comfort and cushioning with your every move.” – Nike

Now, if this is Lunarlon then it’s the worst Lunarlon I’ve ever worn — it feels like Phylon. Really. Dense. Phylon. Court feel is there, despite the fact that you ride a little higher than past models, but if this is where Lunarlon is headed then I’m pretty disappointed. I first tried Lunarlon while playing in the Jordan Fly Wade 2. Holy sh*t, that was an unbelievably comfortable shoe. These are a huge departure from that, and it’s very disheartening.

Moving onto the Zoom Air. This is the part when I just get a little pissed. I post updates on Instagram during my wear-testing just to give people a little taste of what I’m thinking when things are happening. When I complained about the lack of cushion the hate was real. Like, crazy real.

To discredit someone’s experience when playing in a shoe is one of the most juvenile and down right asinine things someone can do. Did we just enter the realm of a mini-rant? Sure; why not? I “keep it real” — as they say — all the time. Whether you like it or not. However, I wouldn’t cut someone down or attack their integrity — especially when we’re talking about sneakers.

Myself, along with the rest of the WearTesters staff are always unbiased, self funded (yes, we purchase the majority of shoes tested), we are not affiliated with any brand, we collect no payments from any brand, and if a product is gifted you will hear our non-biased opinions about said product. That even applies when I decide to collaborate my brand (WearTesters) with another to release a product (because I genuinely enjoy the product) — I collect no payment as it’s something I personally request. You will definitely see ads here on the site and on the YouTube end because that is the only way we’re able to fund all of this. If you ever disagree with another person then, by all means, discuss the differences that you’ve experienced. However, if you attempt to attack someone and their integrity, honesty, experience — unprovoked mind you — without facts, well then, that’s just wrong. Thinking that you’re above another person is just ridiculous. End rant.

Back to the Zoom Air. There isn’t much of it. Nike led you to believe that it used a large volume Zoom unit in the heel, much like it had done in the Kobe X. However, it’s just an engraved piece of TPU that Nike was able to replicate the look of Zoom on (it did a fantastic job). What we received instead is a regular-sized Zoom Air unit within the rock hard “Lunarlon” midsole.

The setup is very lackluster and required more break-in time than one expects to put up with nowadays. Pain at the arch of the foot, unresponsive Zoom, and Lunlarlon that has similar properties to Phylon. Not a good look.

Materials – Textile mesh is used along the upper. It’s lightweight, strong and durable. It’s also very supportive for a textile. This is a good and bad thing. It‘s great for those that require more support and want to keep things as light as possible. However, the materials also require more break-in time than one would expect today. My pair still hasn’t broken-in and I’ve been trying to get them used to my foot for about a month now. They pinch and blister the sides of my feet (both feet) when playing. To the point where it becomes unbearable to deal with.

The last time I dealt with a shoe that did this to my feet was the Nike Kobe 7. However, I was able to fix the issues that caused the blistering and chaffing within the shoe. Unfortunately, I can’t do much of anything with these to resolve what I’ve been experiencing.

I miss the plastic and glue infused Flyknit we’ve been seeing on the past few Kobe models…and I can’t believe it.

Fit – The Kobe A.D. fits true to size and this is the one aspect of the shoe that is pretty solid. Containment and support from the fit are well balanced. The heel is the best aspect since the forefoot — even though it fits and contains — caused a ton of pain due to the materials used. Wide footers might want to go up 1/2 size, but trying them on is always the best way to measure what may or may not work for you.

Support – The support features are pretty standard. Although, I don’t think there is a TPU midfoot shank — I may be wrong — as we have the TPU sidewall instead. There is a tiny outrigger in place, and it gets in the way (somehow) more often than not. It’s a strange feeling that I haven’t really experienced before, the best way I know how to describe it is that at times it felt as if it was getting sucked under my feet. Mostly when I’d quickly move laterally to avoid a defender while setting my feet for a pull-up jump shot. However, the heel containment and support is excellent. The design and sculpt of the heel is something I hope to see on future editions of the Kobe model, it‘s that good.

Overall – Utter disappointment. Was I duped? $160 spent and wasted. Those are my feelings when thinking about the Nike Kobe A.D. If you enjoy your pair then I am genuinely happy for you as that would mean you enjoy your purchase and don’t share the same sentiment that I do. Every once in a while a brand puts out a dud. This was a giant one. 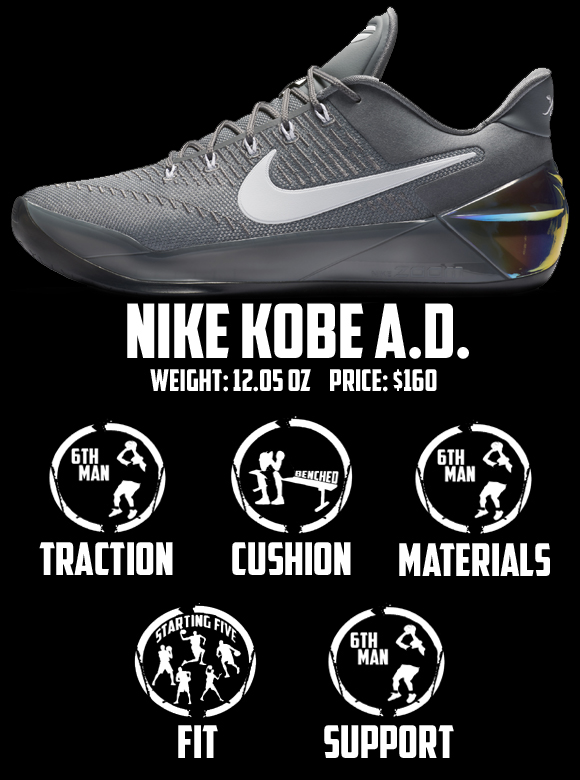