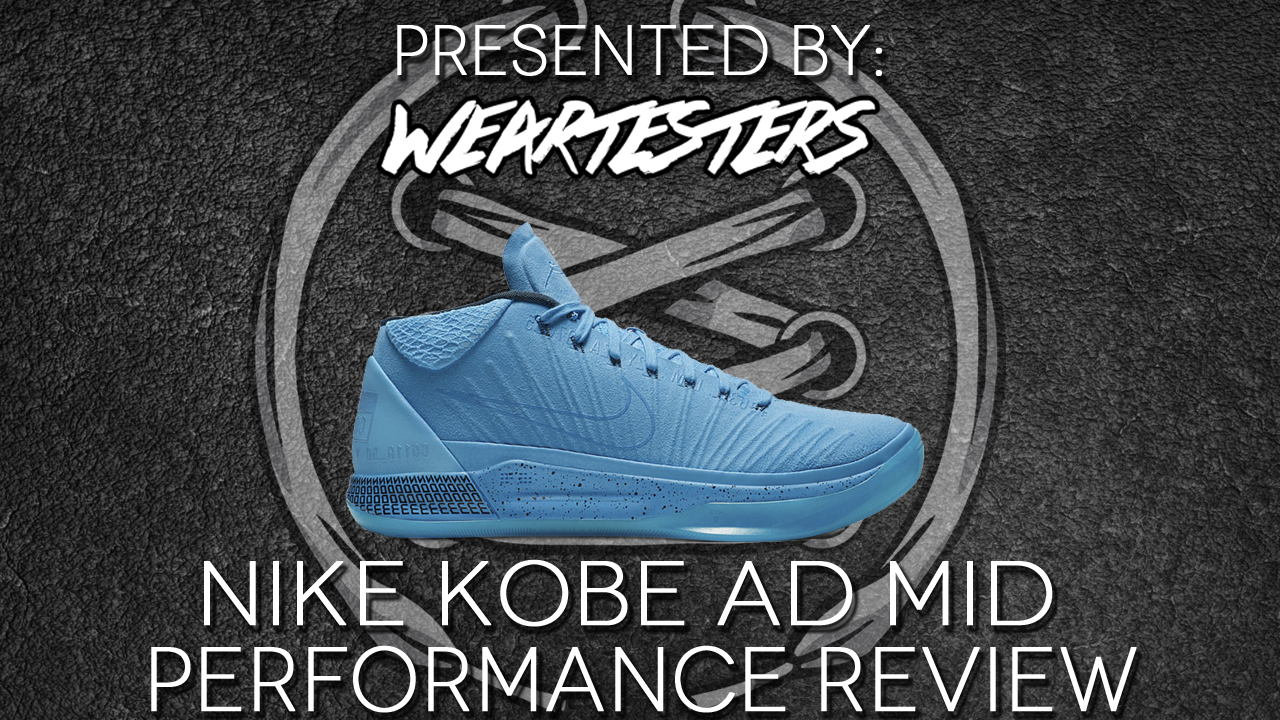 The Kobe line has been course corrected with the latest Nike Kobe AD Mid.

Traction – This sh*t was beastly! The traction on the Nike Kobe AD Mid offers multi-directional coverage that didn’t disappoint. Despite being translucent rubber, it worked really well. Dust is attracted to this type of rubber, so you will need to wipe here and there, but it was nothing that would hinder the traction’s performance if you were too busy playing to wipe.

We should all know by now that squeaking doesn’t equate to good traction. However, this outsole was loud. Like, really loud. These guys will have you sounding like Black Canary is out there maneuvering on the hardwood.

Outdoor use is not recommended if you want traction that lasts because the rubber is pretty soft.

Cushion – You will not be disappointed with this setup. The midsole is Lunarlon and the heel features a large volume Zoom Air unit. Impact protection and energy return are the heel’s main focus. The forefoot is all about offering a balanced ride that allows you to be quick on your feet while still maintaining a level of comfort. There is a slight bounce to the Lunar foam this time around, and the Kobe AD Mid is more comparable to the Kobe 10 and Kobe A.D. NXT rather than the previous Kobe A.D. If you’ve enjoyed Lunar setups then you’re going to love these.

Materials – For a $150 shoe, a $150 signature shoe at that, the materials used should have been much nicer. Do they work? Yes. If that is all you’re worried about then the Kobe AD Mid will do just fine. However, I have to call a spade a spade. The materials are horrible — especially for a Kobe model. You can find better materials on the $100 Mamba Instinct.

Something to note: the materials are not breathable at all — not even the tongue. This might be the worst ventilated shoe I’ve worn since the original UA ClutchFit Drive. These might actually be a little worse. At least the tongue on the CF Drive allowed for some heat to escape.

Moisture buildup becomes an issue within the shoe rather quickly because of the lack of ventilation. When you have moisture buildup within a shoe, and you have friction involved, blistering is inevitable. This is a simple mistake in footwear that shouldn’t really happen anymore. While they were awesome, the ’90s are long gone — and shoes that don’t breath should’ve stayed behind as well.

Fit – The Kobe AD Mid runs true to size…for the most part. I had a weird issue, that I hope is a manufacturing defect with my pair, because the right shoe was tighter than the left one. The additional tightness, coupled with no air flow and tons of friction while playing for 3 hours at a time, ensured that my right foot looks like it just came out of a blender. Disgusting and painful.

I would highly recommend trying the shoe on in-store before you order online — especially if you have a wide foot. I can’t see a wider footer wearing these comfortably going true to size.

As far as lockdown, I never had any issues. That could be because my foot was practically stuck inside the shoe, and even with the left (properly fitting) shoe I had experienced no issues. The lacing enclosure worked well along the midfoot while the slightly raised collar allowed for optimal heel lockdown. Once you get your size down I don’t think you’ll have any real issues.

Support – The Kobe AD Mid uses the traditional features that we’ve all come to know and love. The internal heel counter does a good job keeping your foot on the footbed. However, the lateral outrigger is much better than the one featured on the original Kobe A.D. These use a slightly wider forefoot base that is flat all the way through the heel so stability isn’t a problem at all.

Nike even brought back the thin glass/carbon fiber shank for additional torsional rigidity and support. We haven’t seen one of those on a Kobe since the 8. Welcome back, we’ve missed you.

Overall – Ventilation and material quality are where the Kobe AD Mid’s could improve. However, the rest of the shoe plays and performs really well. Traction was awesome and the cushion was solid — especially for guards. I’m hoping we see some material variations of the shoe throughout the season because it would be a waste if the felt uppers are the only option we’re given. If the Kobe AD Mid had a knitted or mesh upper it’d be one hell of a shoe. 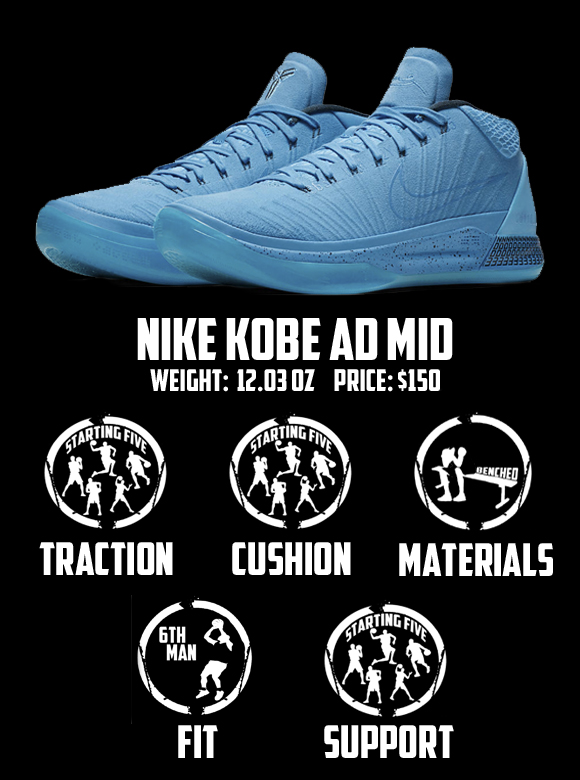