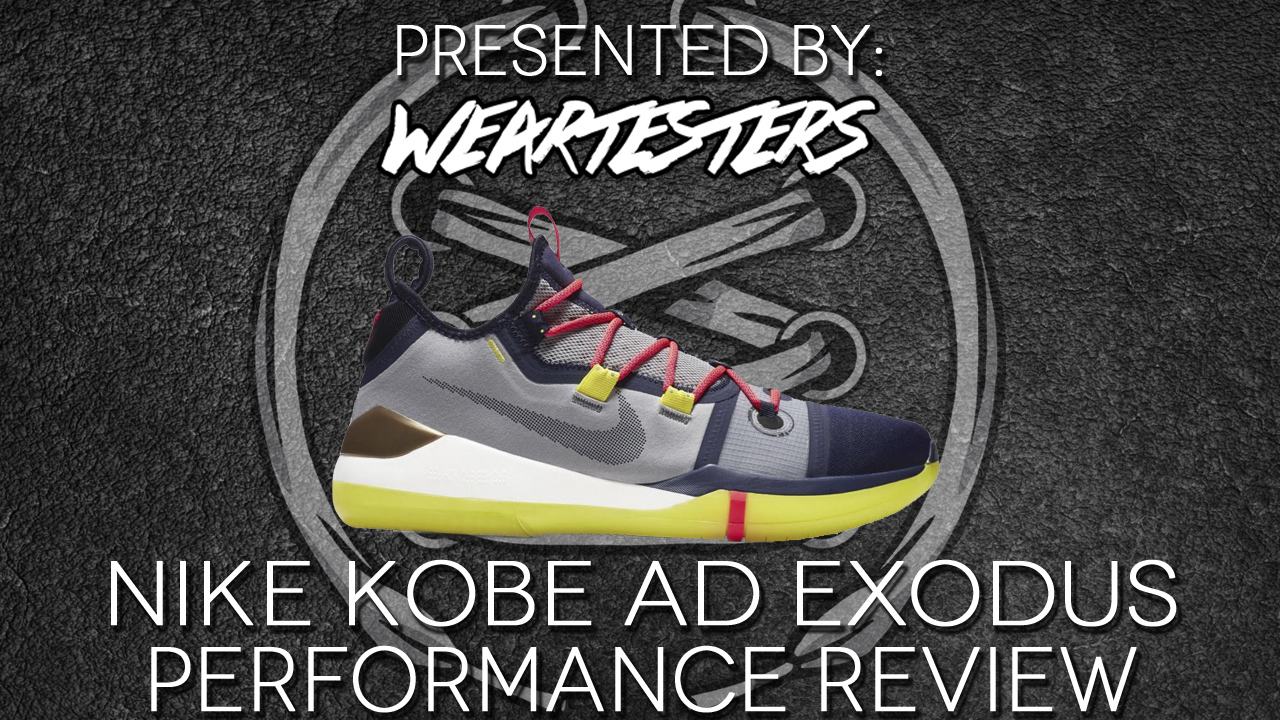 Nope, Nike and Kobe aren’t done. There is another AD in town. So how does the Kobe AD Exodus perform? Let’s go…

What took so long for this review? Didn’t these get purchased on release day? Well, yes, but the traction held me up. On first wearing I was ready to sell the Kobe AD Exodus because I slipped and slid all over the court, falling twice on first steps from a standstill position while trying to drive.

Of course, it was a dirty, bad 24-Hour Fitness court, but when I changed into the Jordan 32 I was good to go. Two days later, same court, same results. Someone was about to get a deal on these. Third wearing, I went to a local college court and played — better floor, better results. I was sticking and moving like Ali so these could work! I went back to the original court for my last wear, and lo and behold, the floor was clean and the results were serious stickiness.

All that said, if you are playing on a fairly clean court, you will be good. I guarantee on dirty courts I wiped these every 4-5 trips down the floor and was still iffy. Once the floor was swept I  no issues at all. The soles will suck up every particle of dust in a three mile area, so keep them clean. Outdoors? Next…

Once again, we get a Kobe model with a dispute about the cushioning. We know the heel is Zoom Air, and after seeing the Kobe AD Exodus deconstructed we know it’s a huge heel unit. But what’s in the forefoot? Yeah, it’s foam. It’s basic injected Phylon.

On a budget model (the under-$80 silhouettes) this might not be a bad thing. But on the Kobe AD it’s a little…underwhelming. The caged in forefoot, which uses the same outsole rubber, makes it stiff and dead-feeling. Not as dead as the Kyrie 3 but just a budget foam/forefoot feel. While playing, however, I had no complaints; the forefoot rode low and with very little compression of the midsole so the response was great. Once traction dialed in, change of direction was quick and landing on jumpers or drives was no issue. Not the best, but not a deal-breaker at all.

The heel unit, as mentioned, covers the whole area and is thick (14mm). The only issue I had at all with the heel was coming off screens/curls and planting. I heel plant and turn into my shot to square up and the edges of the Zoom unit would compress under pressure, causing my foot to lean slightly as I planted. I gradually got used to this issue and after a couple of wears it wasn’t an issue. I would gladly trade that feeling for full-length Zoom for impact protection on those back-leaning landings.

I’ve seen better, but the materials work. Yes, we get the felt/suede upper from the Kobe AD Mid, but luckily it isn’t the full upper, so that initial stiffness from the Mid is gone. It still doesn’t breathe, and after every run my shoes were soaked in that area. The tongue area is Nike Pro/Torch material, which is a padded mesh with holes strategically cut into the internal foam for ventilation. Doing this lets the tongue remove lace pressure with the foam but provides ventilation from the holes and mesh; it helps a little.

The forefoot is a combination of two materials: composite mesh and Nike Basketball mesh. The composite is the band you see over the first lace loops, and it provides no-stretch, no-give stability for lateral movements and hard steps. The rest of the toe moving forward is thin mesh, like the PG 1, and it is so light and thin it almost isn’t there. There is a fused area over the big toe — we know why — and that’s it.

Schnug. Not unbearable-in-true-to-size snug, but a really close, tight fit. The materials having little to no give laterally help with that, and honestly, it fits perfect for me. It feels too small until you play and realize the shoe just moves with you with no slow-down or issues.

The one issue I can see some having is around the arch; it’s narrower than any Kobe I can remember in that area and some will want to go a half-size up when buying. I wouldn’t unless you are a wide-footer and can’t stand it. The feeling goes away and the fit will be appreciated later.

The heel is completely locked in with a thick padding around the collar and Achilles. It is still amazing that a shoe with four lace holes can fit like this, but lockdown is complete and total.

As for length, true to size should give you about a quarter-inch of extra space on your big toe, just enough to expand a little on those long days.

For a lowtop that is meant to be light and fast, the Kobe AD Exodus is…light and fast. Support is okay, with a standard heel counter and a raised midsole in the heel and forefoot. There is no midfoot shank, but that isn’t always a deal breaker — the Kobe AD Exodus has a flat sole and serious internal arch structure so midfoot support is good. The forefoot is built without an outrigger, but the sole is rounded off and is slightly wider than the upper so there is no sense of rolling over while playing. Additionally, the composite mesh across the toebox does a fantastic job of holding your foot over the footbed with no give while the regular mesh is soft and feels free.

The rest of the stability and support comes from the simple lacing system and the fit. The Kobe AD Exodus fits almost perfect, as stated above, and when the foot isn’t allowed to slide inside of the shoe it is amazing how support improves.

Transition is another extremely strong point on the Kobe AD Exodus. Often, when a shoe has a flat bottom and different heel/forefoot cushioning, there can be a “slappy” feel when running, like you borrowed your big brother’s shoes or something. This Kobe is smooth in every motion, and that is credited to the fit and the materials being soft in the right places (toebox) and rigid in others (heel counter).

Nope, the Kobe AD Exodus isn’t the best Kobe ever. It isn’t even the best Kobe on shelves right now (still the Protro I). It is, however, a really solid effort from the Swoosh. It does almost everything well on-court (especially clean courts) and is smooth on-foot. Yes, Zoom in the forefoot would have possibly been better (we never know — it may have made the ride stiff and clunky), but the foam does create a quick, low-riding shoe suitable for small guards and wings. 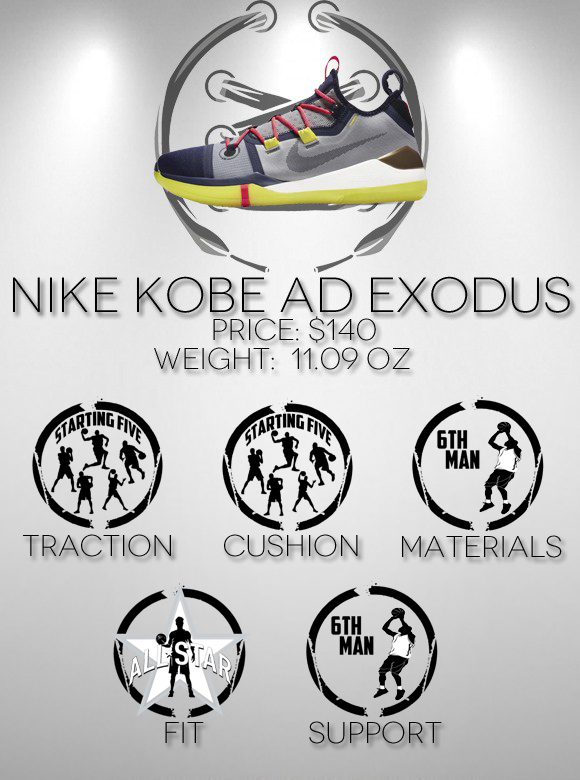