10 years is a long time for a shoe line to live and after that decade the Hyperdunk may have hit its peak. We present the Nike Hyperdunk X Performance Review.

10 years. The Nike Hyperdunk has been around since the 2008 Olympics, so we have gotten 10 years of the “ultimate” Nike team shoe, a shoe made for every player at any position. We have seen Lunar, Zoom, and React cushioning on it. Nike has put Flywire, 2nd generation Flywire, mesh, knit, and fuse on the uppers. Now let’s see how the 2018 version does.

One thing the Hyperdunk has never lacked is traction, and the Hyperdunk X is no slouch either. The shoe uses a multi-directional pattern that looks like soundwaves (not the Decepticon), so there is coverage in any direction…although the pattern does look more linear than lateral.

Once on-court, the Hyperdunk X is solid and stops quick but smooth due to the softer rubber and spaced out pattern (a hard stop, to me, is the Jordan XX8 and Kobe Protro). The Hyperdunk X were put to the test on four different floors — normal (dirty) 24-Hour Fitness, swept and clean 24-Hour Fitness, clean high school court, and rubber church court — and there was not one instance of slipping or skating. Matter of fact, I’m not sure I ever wiped. The pattern is set wide and pushes dirt and dust out, making the outsole extremely reliable from court to court.

Outdoors? At this point, why even ask — it’s easier to find Waldo than a suitable outdoor shoe. The Hyperdunk X uses a soft rubber and a shallow pattern, knowing this is a team shoe and will last just until the last buzzer sounds and then no longer. Don’t even think a couple of months on concrete/blacktop is possible because it ain’t.

Okay, get this out of the way now: the Hyperdunk should never ever go away from responsive Zoom Air cushioning. I don’t care what new foams are out or what Nike has to push, and I know the original was the vehicle for Lunar Foam, but Zoom Air is still (over 20 years later) the best cushioning Nike has ever made for basketball, period.

If the Hyperdunk is your “everyman” basketball shoe, why not give the cushioning that makes “every man” happy? After the disaster that was React in the 2017 HD (and if you liked React, I don’t know what to say about you), the Hyperdunk X brings back the heel and forefoot Zoom from the HD2016, only a lot thicker.

The heel unit in the Hyperdunk X is 14mm thick, where the 2016 was around 8mm. The forefoot is almost the same and feels it. The biggest difference is the foam carrier; the Hyperdunk X still uses Phylon but a much softer makeup, giving the shoe a better compression and rebound ability. The foam takes the initial landing force and compresses until the Zoom takes over, providing a stiffer response that springs into your next move — just like Zoom was meant to do! Zoom was never about impact protection; it was first and foremost about low ride, court feel, and response.

After almost three weeks of this being the only shoe I have played in (the Kobe AD made an appearance towards the end), the cushioning is actually fantastic. No pain, no aches, no harsh jarring from landing, and it feels quick and bouncy on every move. From the first time I put the Hyperdunk X on I could tell this was the way Zoom should feel, and it’s magic. Still, after 20 years, good Zoom makes me smile. From pushing off laterally on defense to my first step driving off of a pump fake three, I felt quick on court.

If there is area that lags behind the others on the Hyperdunk X, it is materials. The shoe features a textile upper with strategic foam backing (although it looks like jersey mesh in-hand), the materials are…okay. Nothing is premium except for the little hit of leather on the heel cup, but it works. The mesh isn’t stretchy at all, providing serious containment in the forefoot on lateral movements, while a fused area over the toebox gives a little extra durability in that area for toe drags.

The one deviation from the mesh is a big one and that’s the midfoot saddle. Made out of a smooth nylon that feels more neoprene than mesh, the area has a little more stretch than the rest of the shoe, but also provides some compression around your arch. It’s a cool little touch that wasn’t needed but certainly is appreciated.

The ankle collar has dense memory foam padding around the ankle bones that form perfectly around the joint to stop heel slip and movement once laced up. Again, nothing new, but it works and works well with everything else.

Since the Hyperdunk is the shoe for every position and player, it makes sense the fit is accommodating to different foot-shapes and needs (unlike the KD or Curry series, which appear to be made for one athlete). The lacing system is set wide and allows for loosening if needed (and the midfoot stretches to allow more room), and, on the opposite, the laces can be pulled tight for slightly narrow feet.

The upper doesn’t have a true traditional tongue system but does open up wider than most one-piece shoes for ease of entry. Again, the heel padding locks in your foot until movement is gone, so no worries about heel slip if you mess up and get a half-size too big.

As for length, I tried on my true 10.5 and a half-size down to a 10. I honestly could have went either way, but I normally go with the larger size if I’m not sure just because I know after a few games in a row my feet will need a little room (if it’s too much room I can add a sock — easier to fill space than to stretch a mesh upper). If you like a little room up front, go true to size. If you like as little space as possible, go down a half size and enjoy.

Nothing special here; the Hyperdunk X uses a lacing system that pulls the shoe tightly and securely around your foot, with a solid heel counter (both internal and external), and a midfoot shank placed between the forefoot and heel Zoom. But, and a big but it is, there is an added piece that helps a ton, at least on lateral movements: the TPU Swoosh piece on the midfoot.

It looks like it would make the midfoot restrictive and stiff, but it is placed off of the midsole, right around the foot, giving the player something to push off of to slide and cut but not interfering with the function of the cushioning. The rest of the your foot sits slightly below the top level of the sidewalls, providing even more lateral support.

There is a small outrigger on the forefoot that provided the one true problem I had with the Hyperdunk X. On some hard stops and plants (yes, I’m the guy who gets a steal and pulls up full-speed to shoot a three pointer on a one-on-three break) I could feel the outrigger kind of pull under the forefoot. It was a strange feeling, and didn’t happen all the time, but it almost felt like the sole was separating from the shoe when I would stop to jump. If the outrigger was larger this probably would not be a factor, and it isn’t enough to mark the shoe off my list, but be aware.

The Nike Hyperdunk X is a top 5 shoe this year. Well, maybe top 8 — it’s been a good year. The Hyperdunk X definitely gets a vote for most improved shoe in 2018, mainly just because of the killer cushioning that returns to the line.

If you need a dependable shoe for any indoor surface, with great cushioning, a semi-durable upper, and killer fit, look no further. The Hyperdunk X achieved what Nike always looks for in the shoe: it works. It isn’t flashy (although I like the way it looks) and it gets the job done. From high-flying wings to quick guards to mobile big men, the Hyperdunk X is your slide. There isn’t much else to say — it’s a great shoe for every player you will ever be. Nike: please, please, please keep us happy next year. 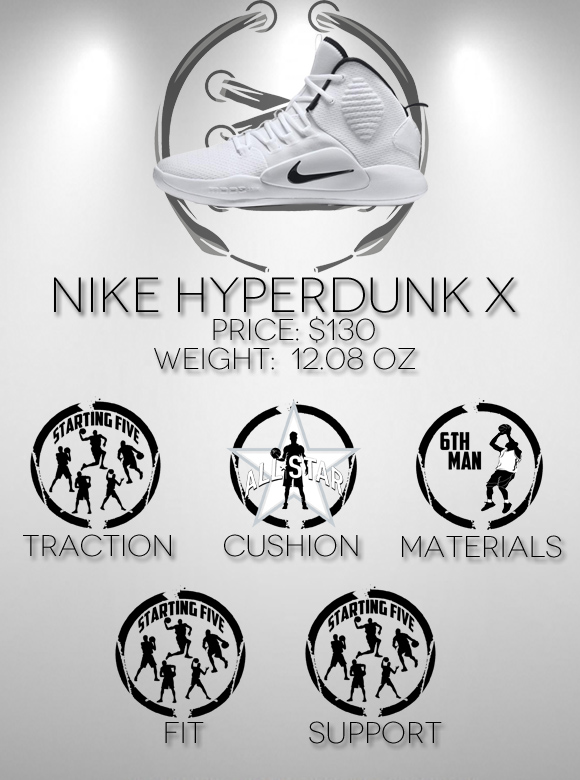