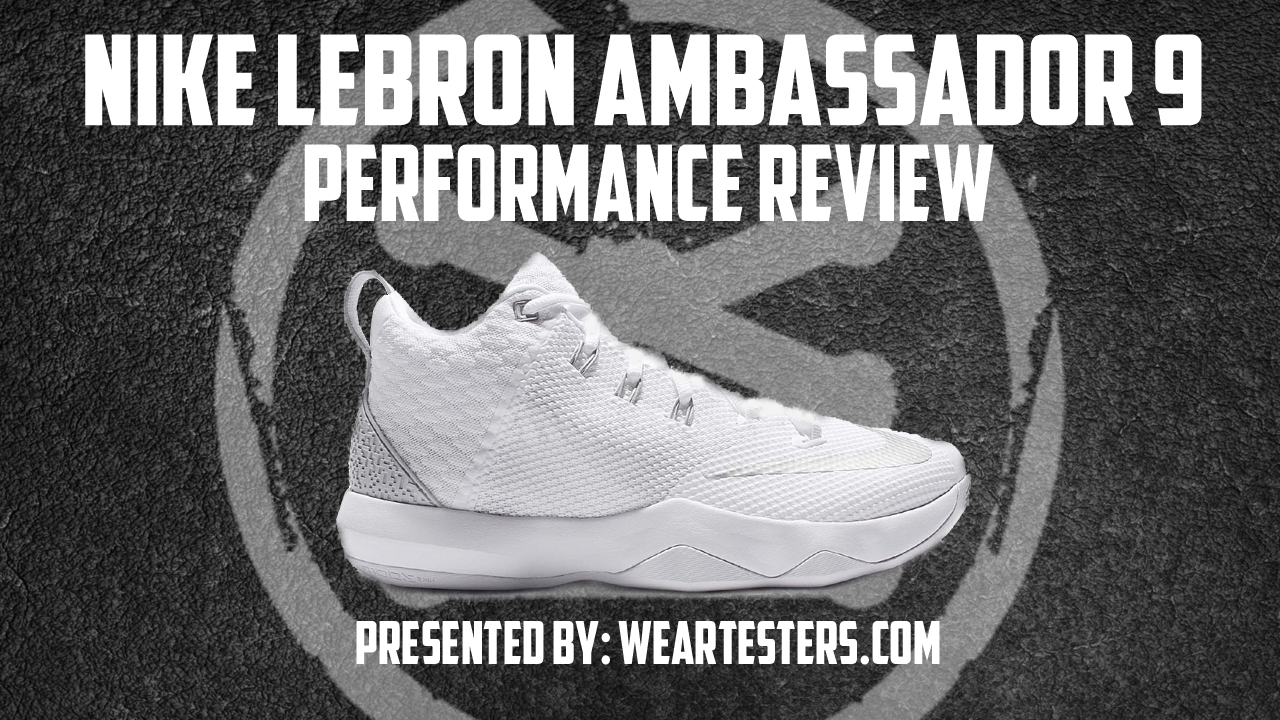 Some may consider it a bit too early, but it’s easy to declare the Nike Zoom LeBron Ambassador 9 a top shoe for Q1 of 2017. 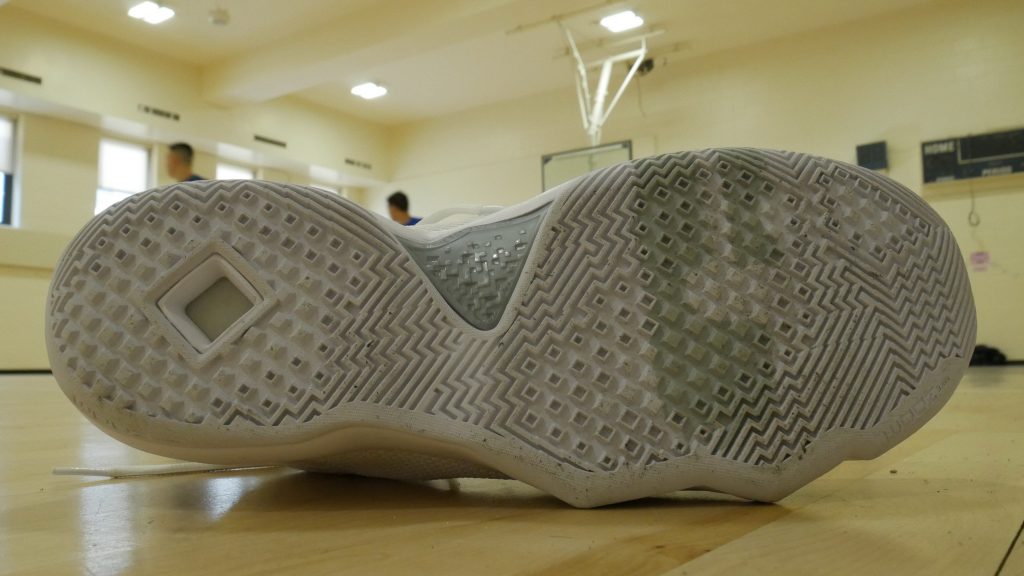 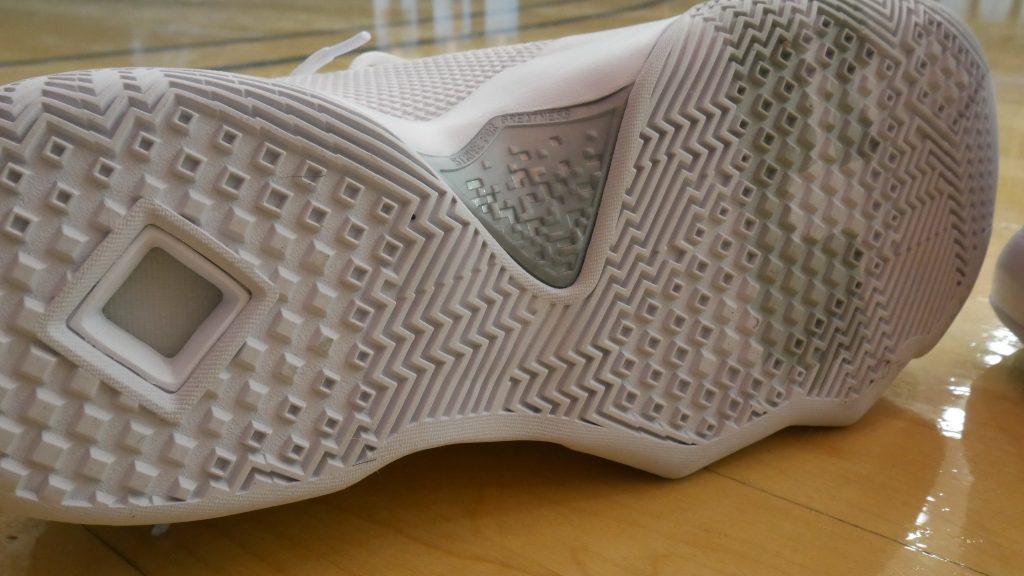 Traction – Here, a diamond grid traction pattern with strategically placed herringbone waves is used. These patterns are similar to what was found on the old Ambassador 8, HyperRev 2016, along with the Nike Air Infuriate. The traction works well. Who am I kidding? The traction works Fan-freakin-tastic. I never had to wipe the bottom of my shoe once.

With the XDR rubber outsole and its traction pattern, the shoe works great whether you choose to play indoors or outdoors. I played in the Ambassador 9 indoors (clean and super dirty courts), and again, not once did I have to wipe. No matter what type of movement I made, I was able to make a stop on a dime without hesitation. The outrigger is not outlandish but responsive with direct contact. The wrap-around along the lateral traction helps with hard cuts without losing any transitional movement either.

This traction setup, paired with outsole compound, is easily the most consistent and downright awesome setup in a long time. Now, why can’t we have this on all other Nike models? 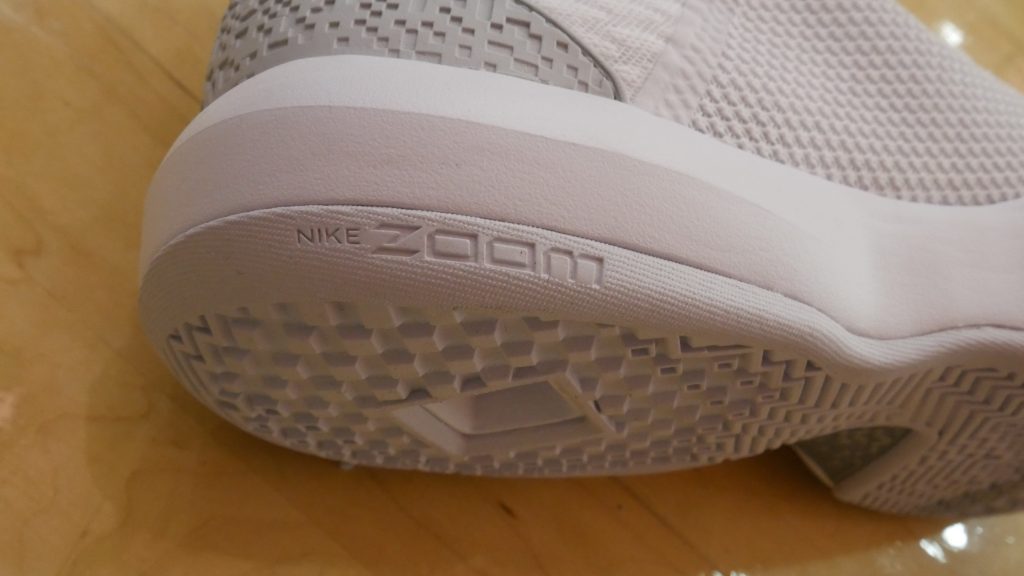 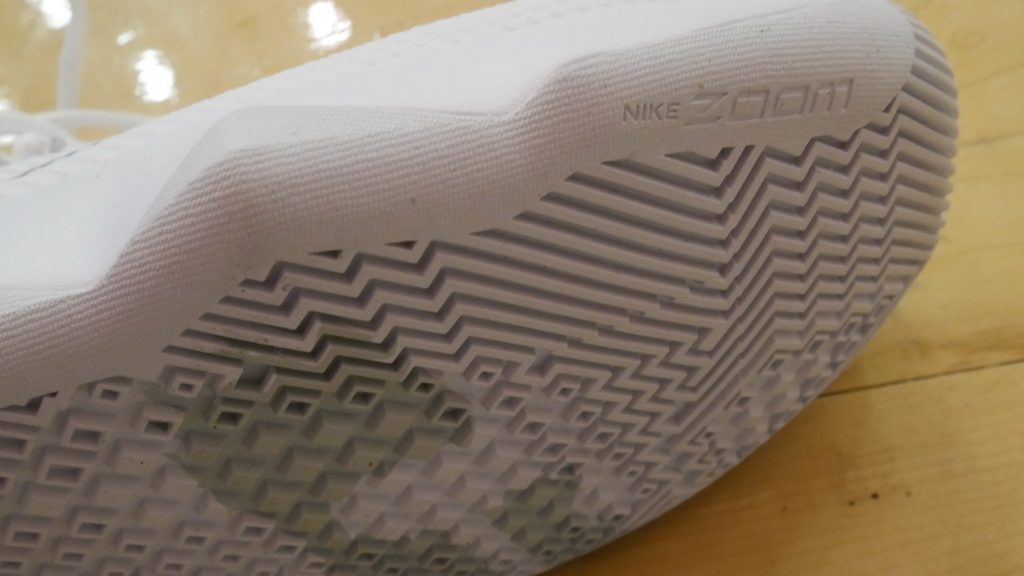 Cushion – Hey, look at that? Forefoot and heel Zoom. This type of cushion setup should be the standard, regardless of any model. There was absolutely no break-in time needed, especially because the cushion is responsive right out of the box.

My only gripe is that I wished the Ambassador 9 used the heel Zoom Air unit the Ambassador 8 had — the 9 uses a smaller rectangular Zoom Air bag. The forefoot Zoom Air bag is slightly bigger along the forefoot, so those that plant heavily on the ball of their feet will definitely will feel the cushion. It isn’t to say the shoe didn’t respond well on impact, I’m just confused. If the cushion already worked well from the last model, why change it if it won’t improve what already works? 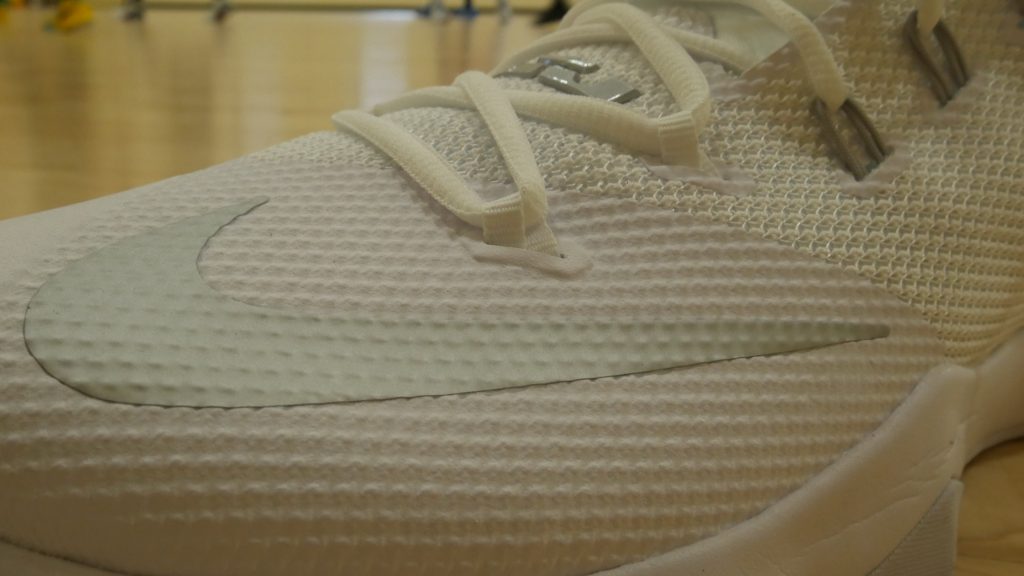 Materials – Mesh is used on the forefoot with TPU reinforcement at high wear areas, particularly at the toebox and rubber heel counter. The midfoot to heel area is mesh backed by a softer foam. There is a plastic shank for torsional support and the XDR rubber compound will give the shoe more durability. The Ambassador 9 is well done and simple — and for its price point you’re getting above average quality compared to the other models out today. 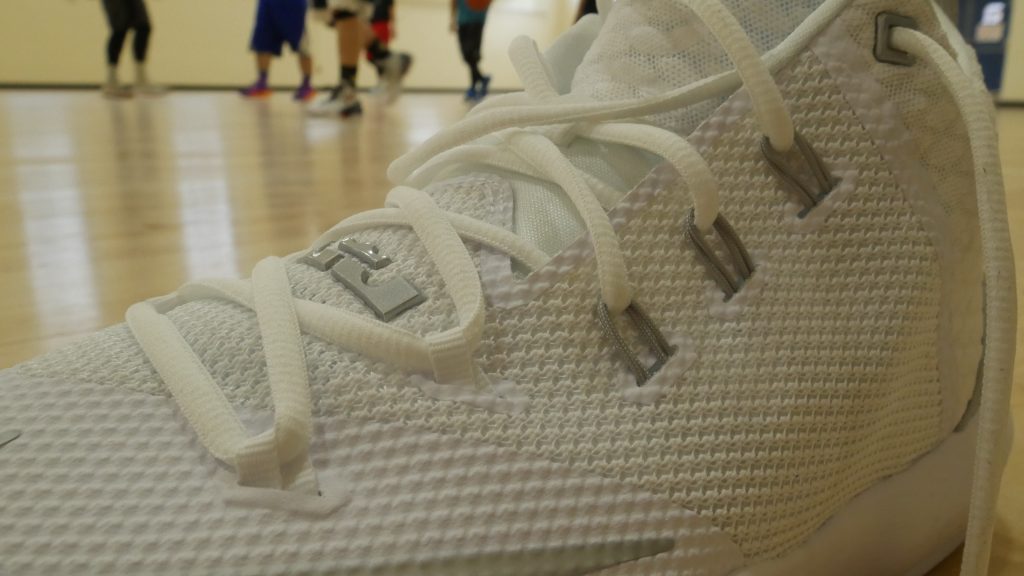 Fit – Amazing. It’s been a while (particularly for a person with wide foot) since I put my foot in a shoe and had it wrap my foot elegantly without any hindrance. The lacing system begins with lacing ribbons that transition into a Flywire lacing setup; it ends with a traditional lace hole at the top for a simple and extremely effective system. There wasn’t an instance where I had to re-lace the shoe with the back-to-back games I played, nor were there any issues of pinching. The lacing ribbons and Flywire are anatomically placed which suits the contour of the feet well.

For those with a more narrow foot, staying true to size is definitely the way to go because there isn’t any deadspace — the Ambassador 9 fit like a glove without any restriction. Just superb. Each model of Ambassadors we test get better and better so why can’t we see this setup in other Swoosh models? 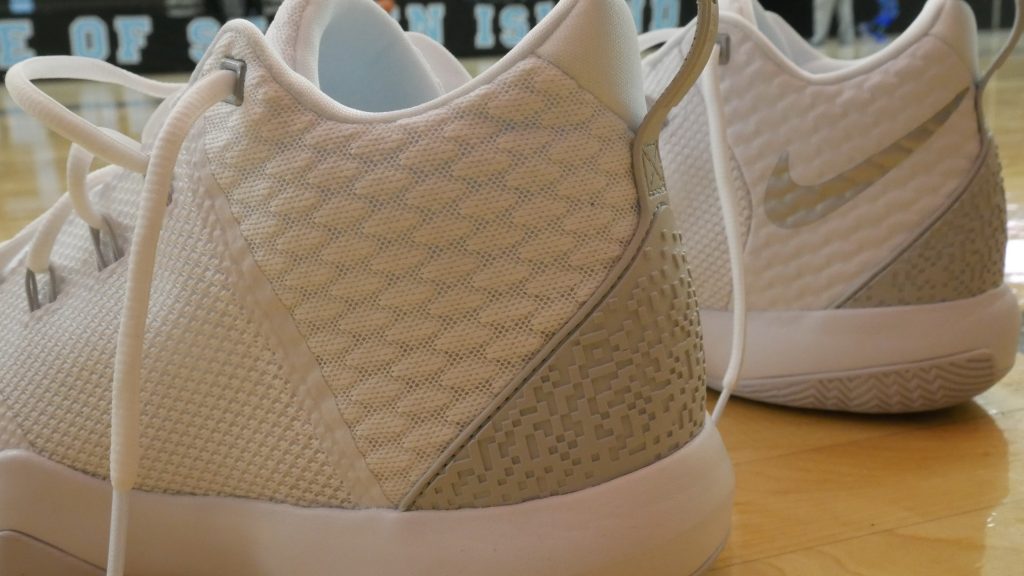 Support – The support comes directly from the fit and the cushioning setup. The fit was great with its awesome lacing setup, while the cushioning was more than adequate. At no point did I have to second guess any of my movements because the shoe just felt like an extension of my feet (it’s also very lightweight). The XDR rubber traction really stuck to the ground without restricting me from stop and go movement. The Ambassador 9 has set the bar high, especially once you stamp LeBron’s name on it. 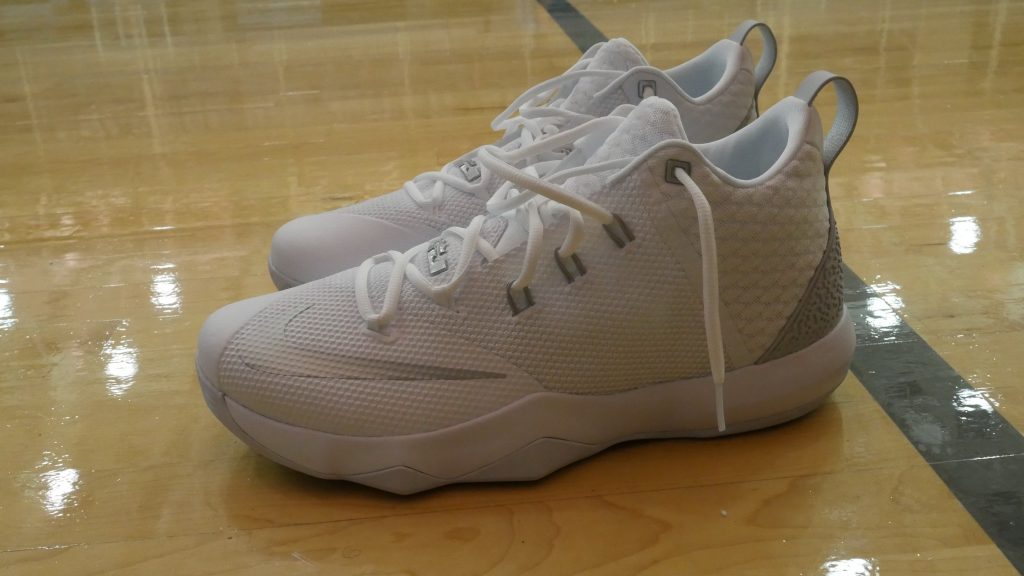 Overall – The Ambassador 9 is simply a fantastic shoe. While it differs from the Ambassador 8, it features many similarities that continue to provide consistent performance. Everything you need in a Nike basketball shoe, this shoe has — cushion, materials, traction, support, fit. How has Swoosh not figured out a way to use the Ambassador line as the standard for what all shoes should aspire to? Better yet, this shoe could easily be the core LeBron signature model. Suffice to say, it seems like the overseas models find a way to the top of our lists because performance.

A great way to start 2017 was being able to weartest a shoe that is a performance beast. King James would be proud. 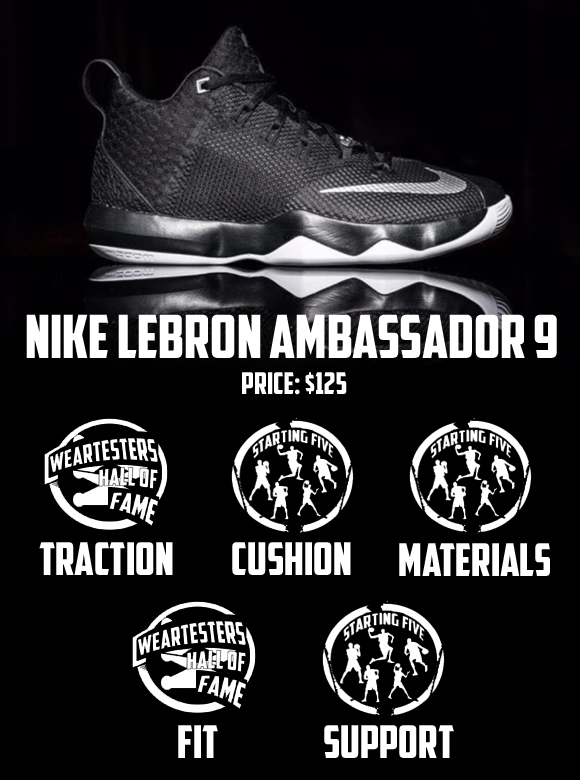