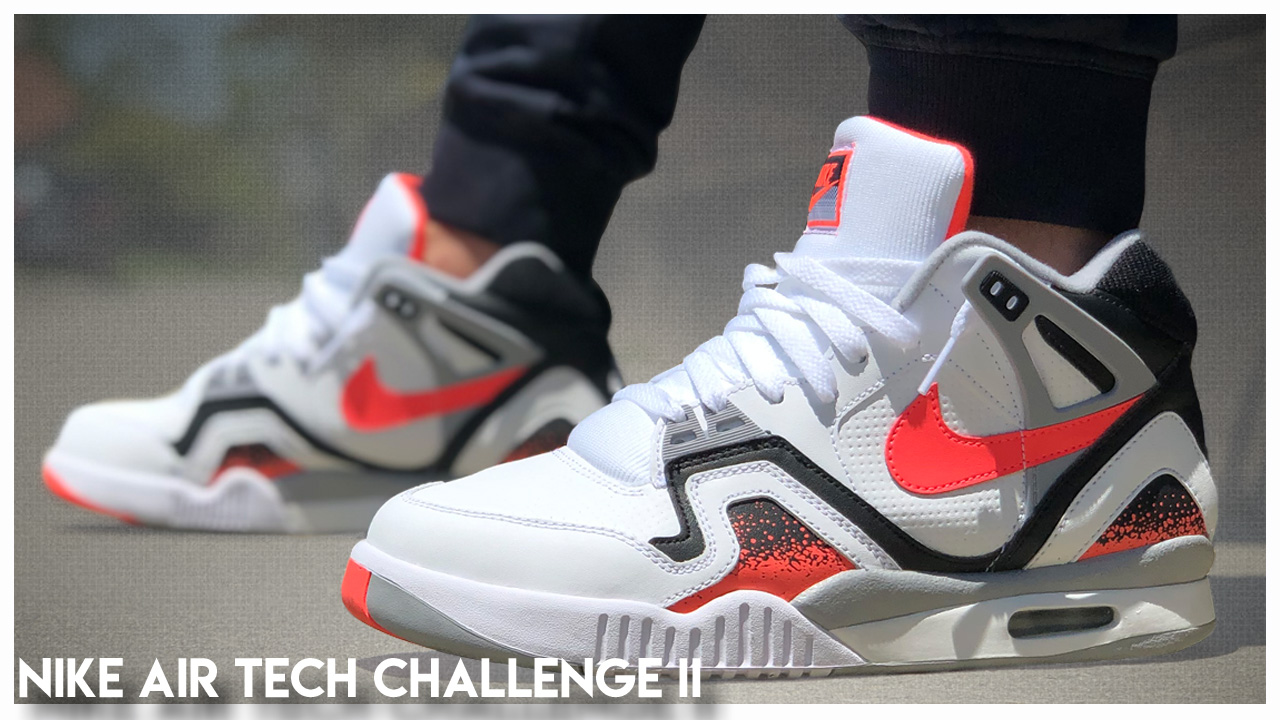 The Nike Air Tech Challenge 2 returned in 2019 and we have a review on the latest rendition.

One of the more popular classic Nike Tennis models is the Nike Air Tech Challenge 2. That said, there are many more classic tennis shoes to come from the Swoosh within the same era.

Personally, I’m not a big fan of the sport; never have been and likely never will be. So, Andre Agassi was not an athlete I ever watched. Granted, I was six when the Air Tech Challenge 2 originally released so I was heavily into Payless Shoes as my go-to for all things footwear. Not by choice of course, but I was six. I didn’t know any different.

Much like a new generation fan of Air Jordan Retros, the first time I saw the Air Tech Challenge 2 was not on the athlete that was attached to the product, but on the feet of someone else I looked up to: Mr. Tim “The Toolman” Taylor himself, Tim Allen.

I loved Tim’s persona and the way he carried himself. His sense of humor was infectious. It was man-love at first grunt.

While the Nike Air Tech Challenge 2 has seen it’s fair share of Retro releases, I’ve only ever owned one pair that I found for a great price. However, they were a 1/2 size too small thus I never ended up wearing them, which was fine as the one pair of Tech Challenge 2’s that have always been the one I felt was a “must have” for me was the OG ‘Hot Lava’ edition. Fast forward to 2019 and I finally own a pair.

The materials on the 2019 Retro are pretty cheap; they’re synthetics from top to bottom. I’ve never owned the OG version so for all I know, this is how they’ve always been. But if a review consists of someone’s opinion on a product then that is mine: the materials aren’t great. At the same time, they don’t have to be. It’s the great debate amongst sneakerheads. Are they worth it? Or more importantly, are they worth it to you?

We all have that one shoe where we’d be willing to overlook its flaws as they’re so desirable that at the end of the day, we’re just happy to have them in some form, rather than not have them at all. As the old saying goes; It’s better to have loved and lost than never have loved at all. Or something like that.

I’m happy as all hell to finally have a pair. Despite the materials not being great, the shoe itself is still great. The design, the era they represent and the memories of the guy I looked up to wearing them, none of that changes.

My perspective will obviously differ from someone that may be a more die-hard fan of Agassi and the Air Tech Challenge 2 — and that’s okay. My perspective is my own. I understand how a die-hard fan may feel. I grew up a fan of Michael Jordan because I watched him play, win and dominate. Now, I watch new generations of kids wear his shoes without knowing who he is, what he’s done, and what his accomplishments meant to some people.

But I won’t scoff at them for that. I accept it and hope that they allow me to pass down what I know to them so that they may see and understand my perspective. Sharing stories with one another is what we as people naturally do.

I hope that my review of the Nike Air Tech Challenge 2 ‘Hot Lava’ for 2019 is worthy of your view. Maybe you feel the same way I do about the product or maybe there is another shoe that strikes the same nerve.

If you were looking for a pair of the Nike Air Tech Challenge 2 ‘Hot Lava’ then you’ll be able to find them available at FootLocker.com and NikeStore.com for $130.