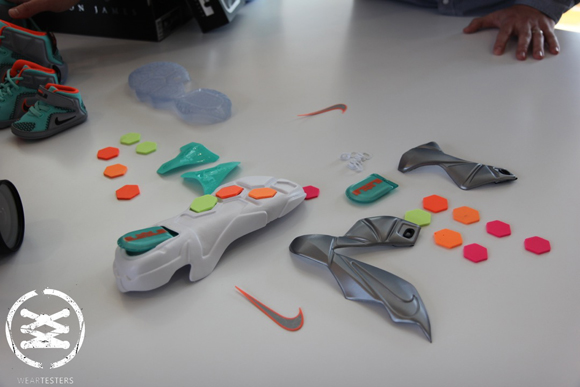 As we all know by now, the Nike LeBron 12 was officially unveiled to the public earlier today. While I wasn’t in attendance at the event, my friend Jacques Slade was, and he was kind enough to share with us some great images from behind the scenes. I’ll do my best to break down the LeBron 12 & how they went about creating the shoe from start to finish.

All shoes start off with a designer and an inspiration. Most of the time that inspiration comes from the athlete – for signature models at least – and that is where Jason Petrie and LeBron James fit into things. Everything else about the shoe… came from a lab. The Nike Sports Research Lab to be precise. If I understood everything correctly, this is the first LeBron to be created within the NSRL (Nike Sports Research Lab), but not the first shoe. Maybe it’s just the tech involved – cushion and materials – but I suppose I consider that to be the actual shoe. If you’re having a hard time following my thought process then I apologize… I’m pretty damn tired right now. 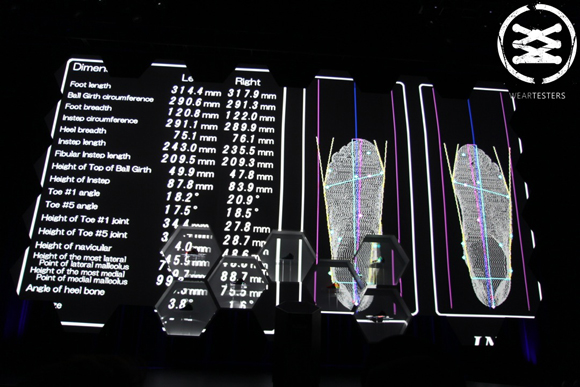 You can see here that the tech needed to start somewhere, and that somewhere just so happens to be a foot. Probably LeBron’s foot, since it’s his shoe. While his foot isn’t my foot, or your foot… or anyone else’s foot. This is a good start to see what the foot – in general – needs (I use the term ‘needs’ relatively lightly) when playing the sport of Basketball. While your body is symmetrical, they typically aren’t identical. Maybe you have a toe that’s decided it wants to go left instead of straight… or you broke a small bone in the ball of your right foot… maybe your heel width is slightly different than the other. You get the point. Leather used to be the only way to combat this, leather with a whole lot of break-in time, and now we have mesh/ woven and knitted materials. With the NSRL, they’ve been able to confront a problem with a viable solution. A material that will contain the foot, but do so in a way that it’ll accommodate a variety of foot shapes.

Once they were able to construct a material that is malleable enough to accommodate most foot shapes and sizes… we get down to the pressure mapping aspect. This isn’t new, I first saw this done with the Air Jordan XX. It was then modified in the Air Jordan XX1, those even came with little hexagon shaped pods that were interchangeable for a custom ride, and then modified again in the Air Jordan XX2 & XX3. We’ve also seen this in the form of Podulon & Podulite… but we’ve never seen it done with Zoom Air only. Supposedly, each Zoom unit in this shoe is tuned differently. Maybe there is more PSI in the lateral units for stability while the one sitting beneath the ball of the foot is slightly less for more spring and responsiveness. Can’t forget that giant Zoom unit placed in the heel too… that is a beautiful sight. In addition to the pressure mapped placement of the finely tuned Zoom, there are flex zones between them. I think this will be the game changer within the LeBron line as smaller players, such as myself, have loved and praised the awesome cushion that usually comes with a LeBron shoe, but we tend to loath how restricted we feel while wearing the shoe. Almost to the point to where a smaller player might feel sluggish. If you can supply us with ample impact protection, responsiveness and flexibility… sign me up for a pair pronto. 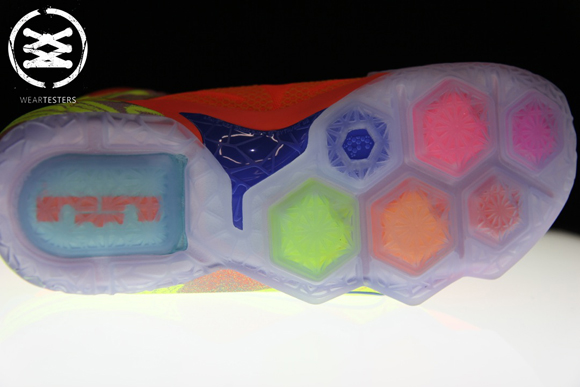 When all is said and done, you get something that looks like this. It looks like LeBron stomped on a bag of Skittles… taste the rainbow. 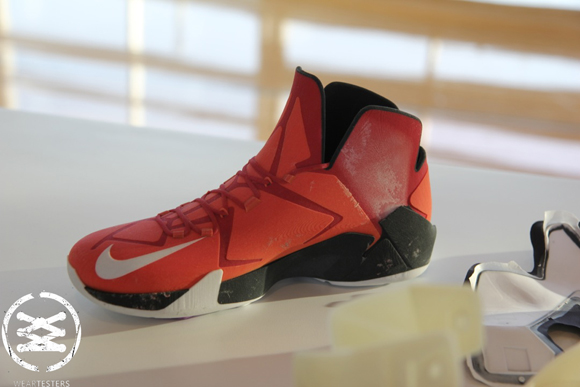 Once the tech has been figured out, its time to build. At the Nike Innovation Kitchen there is a massive 3D printer. With this printer, Nike is able to create a new shoe, piece of tech or support on the spot… and then they walk it over to the NSRL and test the freshly printed piece to fine tune everything prior to production. This cuts down costs and most importantly time. I can already hear the screams… “they’re cutting costs and still charging us an arm and a leg?!”. Look, I don’t like paying high prices for anything… but if its something I want and I find it reasonable then I’ll buy it. There are plenty of alternatives that will cost you at least half of the price of these… but you want the new LeBron. I bought a Honda because it was just as efficient as that BMW I wanted… but the BMW just happened to cost an extra $30k. No, I’m not defending anyone… I’m just being logical. If I don’t want to pay a certain price for something, then I wont buy that something… simple as that. Anywho… back to the LeBron 12… 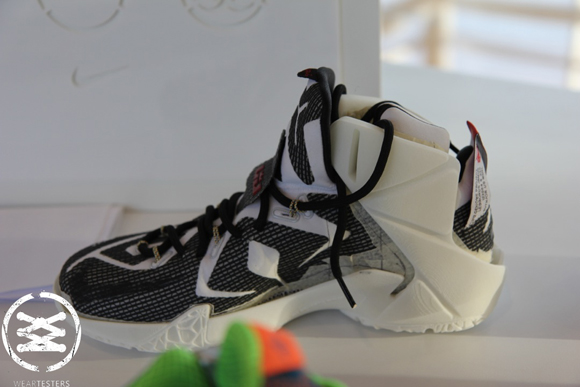 After they’ve fine tuned and tested things with the 3D printed Sample, a production Sample is made. This version is pretty rough and featured more 3D printed panels, this is so they can create and test something quickly… whereas before the 3D printer, they’d have to wait a few weeks for something to be made overseas and then sent back and fourth. This is a much quicker way to turn around a product and it allows you to be much more precise as well. As a sneaker tech nerd… I happen to find it all really freaking cool. 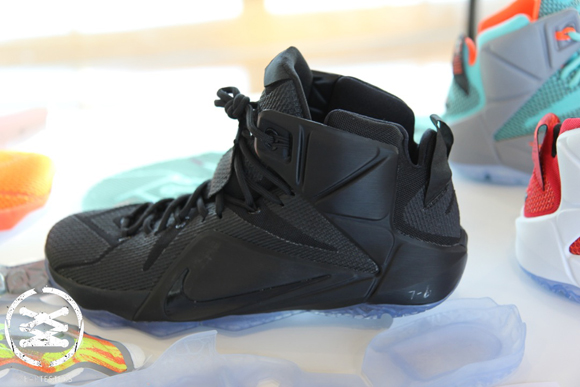 Okay, now we get to the really fun part… the wear test stage. This is a fully constructed model that wear testers (not the kind from this site) get and test certain aspects of the shoe. Traction, cushion, flex, materials, fit etc. The athlete will typically have a pair of these as well to ensure their thoughts are put in place… something I think might’ve been lost in translation during the LeBron 11’s design process. After everything passes the test and is approved… final production begins. 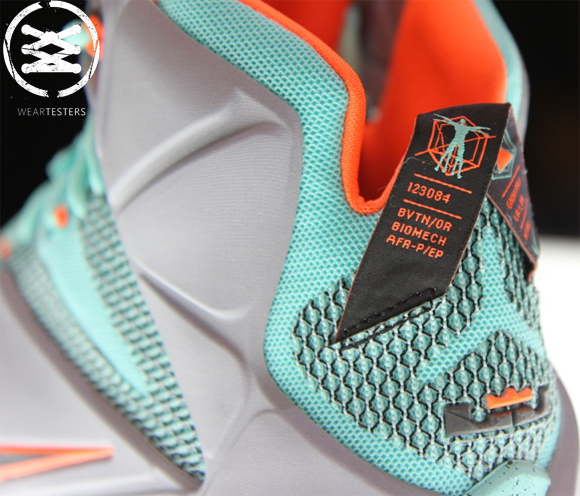 Speaking of the LeBron 11… I don’t think we’ll encounter the same fit problems with this model. We still have Hyperposite, but its contained to just the lateral side and the collar… plus a little on the medial collar. This will add structure and support right where you need it. Mesh is used throughout the rest of the upper along with a new-ish material – something they call MegaFuse. Sounds like something from Mighty Morphin Power Rangers. This MegaFuse adds strength and durability, but up to LeBron’s standards. We all know that if LeBron wore a pair of Nike HyperRev’s he’d probably Ginobili the sh*t out of them. So they needed something stronger, again, this is where that NSRL really comes in handy as they’re able to measure force applied and where its applied. Even though the upper is stronger than typical mesh, it’ll still conform around the foot much nicer than any other material previously used on performance footwear… which is perfect for the athlete that wants to play in LeBron’s shoe… but isn’t quite like LeBron when it comes to playing style, size and stature. 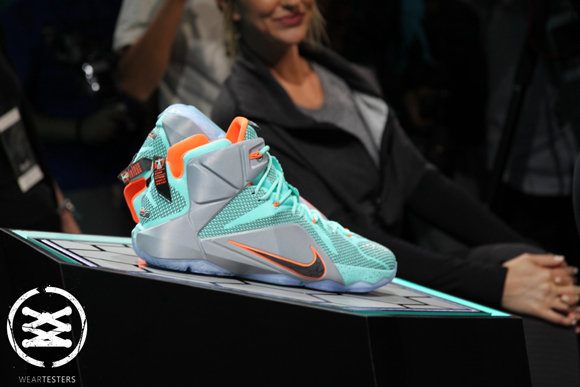 Once all is said and done… we have the LeBron 12. Creating something fresh and new that is both stylish (to some) and functional isn’t a simple task, but having the NSRL right next door makes things a little easier. Now all we can do is wait and see how they play for all us common folk. You know, those of us that play on dirty 24 Hr gym floors, outdoor at the park or in the driveway. The one and only thing about the LeBron 12 that concerns me is the traction since it looks pretty darn similar to the KD 6’s pattern, but who knows… maybe they’ll wind up using a super grippy rubber. Everything else featured on the shoe… looks like it’ll be really fun to try out on-court.

Once again, huge thank you to Jacques Slade for the great live coverage of today’s event and for sending these sweet images our way. Make sure to check him out on TodayInSneaks.com.