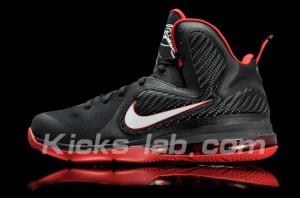 As soon as a new sneaker is revealed I end up getting tons of questions regarding the shoe and what I think its performance will be like. Unfortunately I don’t have the shoes in hand to be able to tell you a full breakdown, however we do have images so its at least a good place to start. 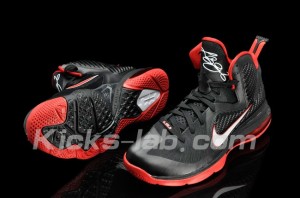 Upon first glance, the LeBron 9 looks very similar to the Li-Ning BD Doom… Just my opinion. This isn’t a bad thing since I liked the way the BD Doom’s looked as far as performance in concerned but it is a little strange to have a Nike shoe look so close to another lesser Brand’s model since usually its the other way around. 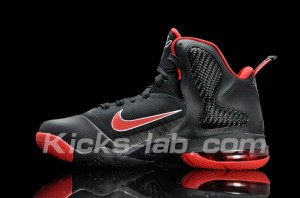 Materials on the upper looks promising. Nike has finally fused their Fuse and Flywire materials together successfully to create most of the upper on the LeBron 9 along with the addition of the Carbon Fiber woven material to create a durable and lightweight package that will still give you enough support to play your style of play. 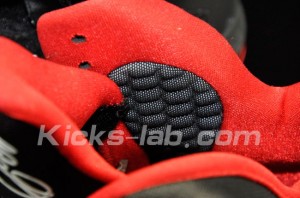 The Pro Combat (I think that’s what its called) padding inside the collar looks awesome. I cant tell for sure without physically touching them, but I assume this material will have similar attributes to memory foam to help mold around your ankle shape giving each wearing a custom fit in that area. I love this, its one of my favorite parts of the Converse Star Player EVO which used a similar tech. 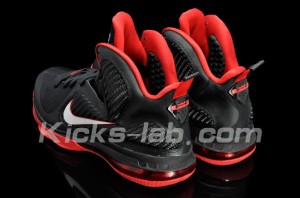 The collar shape itself is very close to that of the LeBron 8 which is something I also like… for a higher cut shoe, this is the way to go to ensure optimal ankle mobility. 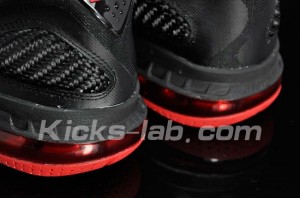 Cushion is the same setup as the LeBron 8 P.S. with Zoom Air in the forefoot and a 180 Air Max Bag in the heel. They’ve stepped it up a notch by using Cushlon foam instead of Phylon which is more responsive and will give you a great step in feel. They also added the Cushlon under the Air Bag again which will makes these a very comfortable sneaker! 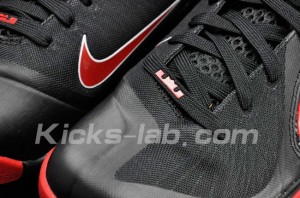 This image gives you a good up close look at the Fuse/ Flywire combination. I’m a bit worried about the forefoot fit but the materials look flexible enough to where it may not hurt the shoe… but who knows until I try it out. 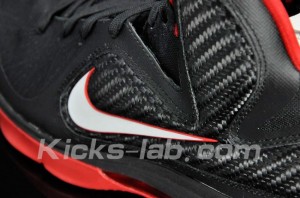 This images shows something that I really love. Right inside the ‘V’ shape cut there is an extra layer of material with additional eyelets… this should give you great heel lock-down much like the Flywire panels on the LeBron 8 did but a little more independent which is a nice touch. 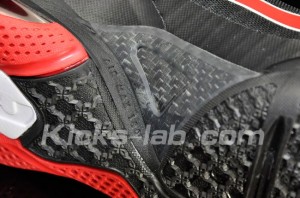 The Carbon Fiber arch support is back in full swing for the 9s and this is something some people didn’t like about the LeBron 8 P.S. For flat footed ballers, this may be a deal breaker. 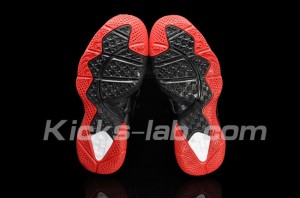 Lastly, the dreaded traction. I can’t say to much on it since I haven’t tried it, the Kobe VI & Fly Wade proved me wrong and both had great traction after break in time so who knows what the ‘chain link’ traction can do. I absolutely hate how they still try to incorporate that darn lion head in all of LeBron’s sneakers… its on the out-sole here in the red areas, its just a partial image of the mane, ear and crown but come on… this is a mans basketball shoe, we don’t want lion kings on our kicks!

So that pretty much covers everything from what I can see. Until I test out the shoes, all of my thoughts and first impressions are pure speculation.