Jalique Gabay Weighs in on the Nike Kyrie Low 2

Sparking his interest upon first look, Jalique Gabay weighs in on the Nike Kyrie Low 2.

I don’t want to make a habit of naming traction patterns but when it comes to naming these nubs, I’ll go with The Starry Night. The swirls emulate multiple pivot points which I personally didn’t find useful, but I can appreciate the coverage in all directions.

Performance is silent, but solid. No bark, but real bite. Though you won’t hear the rubber doing its job against the floor, it is doing what it’s supposed to. Wiping during games was no more frequent than the average sneaker for me and it only took a light wipe to keep me feeling secure for quite some time.

The nubs held up surprisingly well given the rubber is so soft, but I still wouldn’t recommend taking the Kyrie Low 2 outdoors for anything more than a light shoot around.

Comfort in a sneaker is an all-around effort, but the first place I personally seek comfort is underfoot — that was probably my least favorite part of this low top. Don’t get me wrong, the cushion is tolerable – I lasted all day in some rigorous activities both on and off court and never was in a rush to take them off. The Phylon used isn’t as light or soft as some recent performers from Nike and Jordan but it is certainly more forgiving than past Kyrie models — in my opinion.

My real desire would be some consistency with the Zoom units in both the heel and forefoot. Up front, I broke my pair in enough to know there is something there but honestly, I find it underwhelming. The heel Zoom, on the other hand, has been great from start to finish but even then, I felt some discrepancy between my right and left foot.

I do have significant differences physically between each foot — and I have felt the effects of that in shoes before, but nothing like this. In my left heel, the Zoom unit is noticeable, but the right side is bouncy to the point it feels like an unlocked unit is there. I know that’s a weird thing to complain about, but it really messed with me mentally. Hopefully its just a one-off thing that doesn’t affect anyone else who wears the Kyrie Low 2. On the plus side, most considering this model are probably expecting responsiveness, and you definitely get plenty of that. Also, you do get some impact protection, even if it doesn’t seem like it in the moment.

The upper is comprised of a textile that balances just about everything you would like or expect in materials for a basketball sneaker. It is supportive, yet flexible and holds up well through the rigors we know hoop shoes can be put through. Did I mention that even with all the overlays, hardly any break-in is needed.

Though I’m still yet to decide on how necessary some of the TPU and other plastic overlays are, the truth is they only really added to the durability and support of the sneaker and didn’t really take anything important away, so I count it as another strong aspect of the shoe.

Man, I loved the fit of the Kyrie Low, especially after a minimal break-in. It does run snug but otherwise near one-to-one except for no wiggle room over the big-toe which I where have preferred a little bit. Otherwise, these Kyrie’s are near perfect for my feet. For those with wider feet, I say go ahead and see how a half size up feels – these are now on shelves in quite a few places in my area, which is not usually the case (I don’t even recall seeing the original Kyrie Low as often as I have seen this one already).

This is a darn stable low and I really don’t have any negatives to speak of. The TPU panels added security, the base is wide enough while still feeling minimal, and I had no significant issues with heel slip.

In my experience with Kyrie signatures, this has always been a strong point with the line despite the various rounded outsoles you’ll find in them. Granted, I play a very linear style (working on diversifying my game a bit), but still, the Kyrie Low 2 should bring you peace of mind.

Out of the Kyrie 2, 3, 4, and now the Low 2 I’ve played in, I’m willing to say the last is my favorite. It simply checks the most boxes for someone like me, even in the cushion department which is not the Kyrie Low 2’s strong point.

At a retail of $110 the Kyrie Low 2 is on point and plenty should enjoy a lot about it, especially guards that may not seek a substantial amount of impact protection over quickness. Even though I love a good cushion, I still wouldn’t mind recommending the model to anyone with it on their radar. 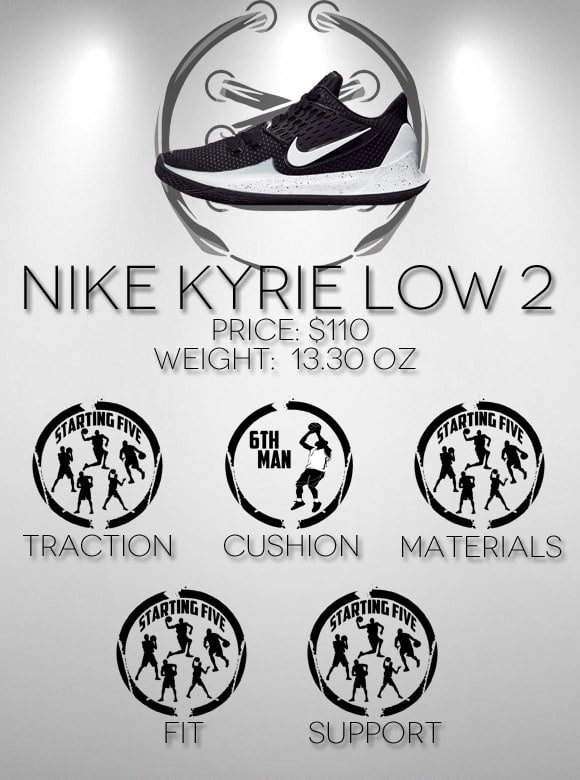