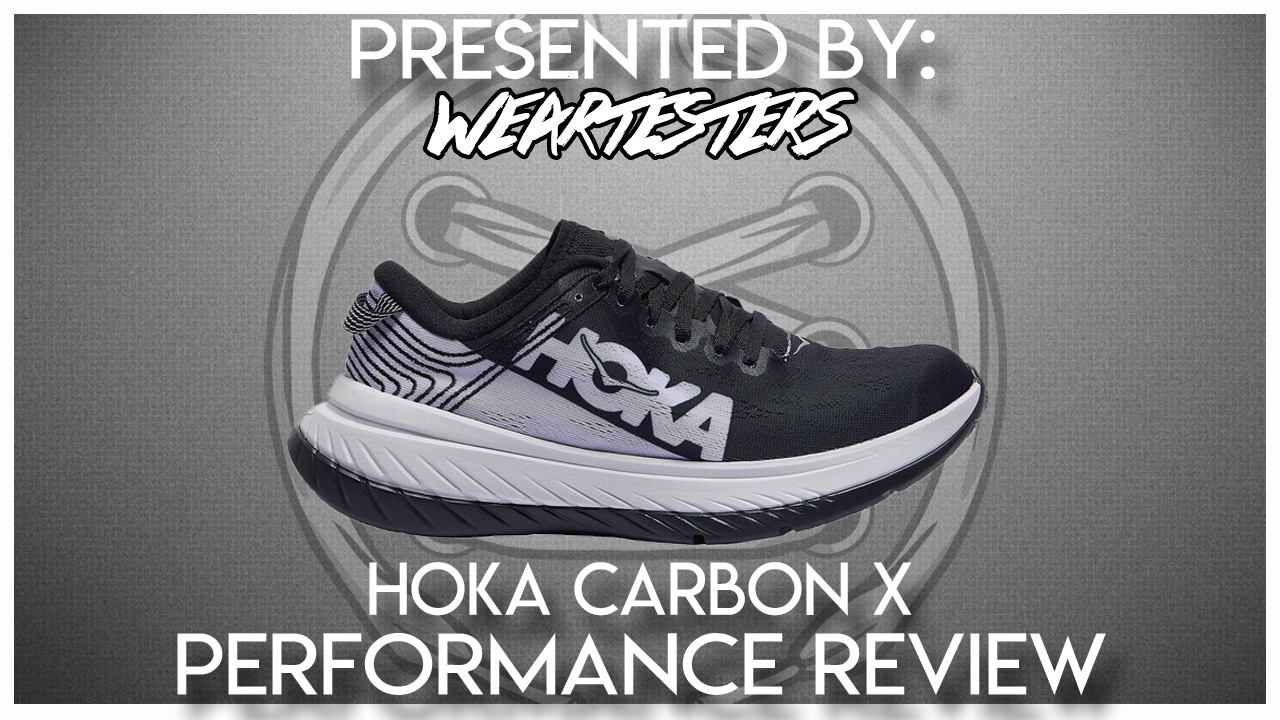 The Hoka Carbon X, simply put, is Hoka’s answer to the Nike Vaporfly Next%. The Carbon X is a carbon-plated, highly cushioned long distance running shoe. And just like with Nike’s signature long distance racing shoe, all of the Hoka athletes are using it for their races. And just like with Nike, the goal is to help athletes hit PRs and even World Records. When the Hoka Carbon X was first introduced, Jim Walmsley, a Hoka athlete, used it to set the world record for the 50 mile distance. And as a bonus, the Carbon X is priced at $180 which is $70 better than the Nike Vaporfly Next%.

To find out how the Carbox X performed, we tested it over 50+ miles of speed workouts, races, long runs, hills, treadmill runs, and casual wear.

We’ve now done several Hoka reviews including the Rincon, Bondi 6, and Arahi 3. All of them got high marks. Now, let’s see if the Carbon X is really the “speed machine” Hoka says it is…

I wrote down “springy” in my notes after my first run in the Hoka Carbon X and I continued to get the same bounce the entire time I was testing them. It’s a race shoe that feels plush.

Right below the foot there’s a layer of Hoka’s Profly X EVA foam, under that is a Y-shaped carbon fiber plate, and touching the ground is a layer of injected rubberized EVA. This combination works. I especially appreciate the Y-shaped carbon fiber plate as it makes the shoe just a touch less stiff than its carbon-plated competitors. It’s not as squishy as other Hoka running shoes but that’s done on purpose. The Carbon X is built for speed on race day and I found it’s combination of responsiveness and soft cushion to be perfect for road races and speed workouts.

Very much like the Nike Zoom Fly 3, it delivers the speed you need alongside cushion that will last for the longest of races.

The injected rubberized EVA outsole really grips the pavement even in wet conditions. There was no slipping or sliding. It also adds a lot to the cushioning package. However, it doesn’t offer the durability needed for 300-500 miles. It’s not a surprise because you’re just running on foam.

I’d prefer Hoka do something like they did with the Rincon and add outsole rubber to high wear areas. They didn’t use rubber on the Carbon X, most likely due to weight concerns, but I hope they figure out how to do so in the future. It’s a glaring omission from such a high performance shoe.

The Hoka Carbon X features a wide base that flares as it approaches the ground to create a wide and stable platform. This is a different approach from Nike’s skinny Vaporfly and one that will accommodate a larger group of runners.

You sit inside the midsole at the heel and feel low to the ground while still sitting quite high overall. There’s no heel counter, just some embroidery that does nothing. In a race day shoe like this you don’t expect a heel counter so I’m not sure what all the embroidery is for. Looks maybe? All it seems to do is add weight.

True to Hoka’s typical style, the Carbon X is one of the more stable shoes in its category and can even take on some light trail work as needed.

The entire upper is engineered mesh with some fuse at the lace loops and a cored mesh tongue. The airflow is fantastic. This is a great shoe for someone running in a hot or humid climate.

The tongue is backed by lycra and features wings that extend down and connect to the midsole. While the tongue is a little floppy looking, once you get a foot in the shoe it’s not going anywhere.

The Hoka Carbon X fits true to size. And while it’s great for those who want a carbon plate without the narrow last of the Vaporfly Next%, it does have a few oddities in the fit.

First is the puffy toebox. You’ll have plenty of room for your feet but the material puffs above your foot and it may bother you if you don’t like excess material above your toes. It didn’t bother me. The engineered mesh is super light so it didn’t rest heavy on my toes. It does look a little strange and lessens the Carbon X’s casual appeal.

The tongue is less like a tongue and more like a sheath. This can take some time to get used to as it’s a strange cross between a typical tongue and an internal bootie setup. It works though so most people will be able to get past it.

Finally, the shoe can feel stiff and bottom heavy due to the carbon plate. Contrary to the current narrative, carbon plates are not for everyone. Make sure you’re ok with the added stiffness.

While the three items above make the fit a little odd in places, I think the majority of wearers won’t mind them. The Carbon X doesn’t have hotspots and the upper is very minimal and light. The positives in the fit outweigh the negatives but it’s worth trying them on in person to make sure the above aspects don’t annoy you.

The Hoka Carbon X is a bouncy, race ready shoe that includes all the normal stylistic choices that make Hoka’s shoes unique. With long term durability being the only real drawback, I think this is a great shoe for training or racing fast.