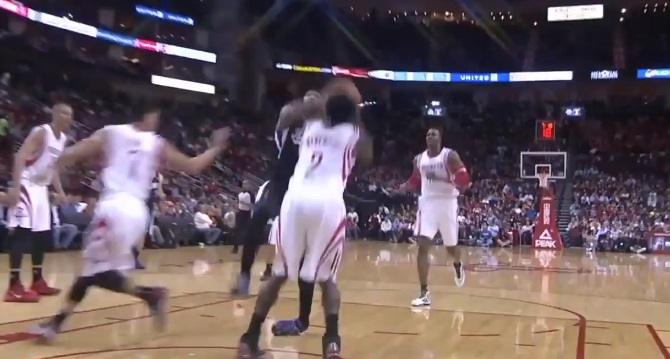 Yes, DeMarcus Cousins sprained his ankle and he was in fact wearing the Nike Zoom HyperRev… however, that wasn’t the cause of the roll over.

Technology is so widespread that even the most simple-minded folk have access to running their uneducated mouth… what you might call a troll, I call an idiot… to each their own. I will say that I did warn those with weak ligaments to watch out when it comes to the HyperRev due to the minimalist upper, however, Cousins’ ran his 6’11” butt all the way down the floor bobbing and weaving through traffic perfectly fine… until Lin clipped his toe just before he planted his foot as he was about to finish at the rim.

Don’t believe me? Slow the clip down and at the :32 & :33 mark you see Lin’s toe swipe Cousins’ toe causing him to roll his ankle. I say this time and time again… everyone is so quick to judge a shoe and blame their injury on it when 9 out of 10 times its either a freak accident (like this) or its the wearers error also known as… sloppy footwork.

With that being said, just relax… stop being an idiot and just play the game in the shoes you want to play in. When playing a sport – any sport – you run the risk of getting injured. I don’t see Football players blaming their helmets for their concussions so we shouldn’t be so quick to blame our footwear when it comes to things such as this.

Is a shoe out there that could have possibly prevented this issue? I think the Ektio Breakaway could have, since they have such large bumpers as outriggers, but I wouldn’t want to recreate this scenario in order to confirm.