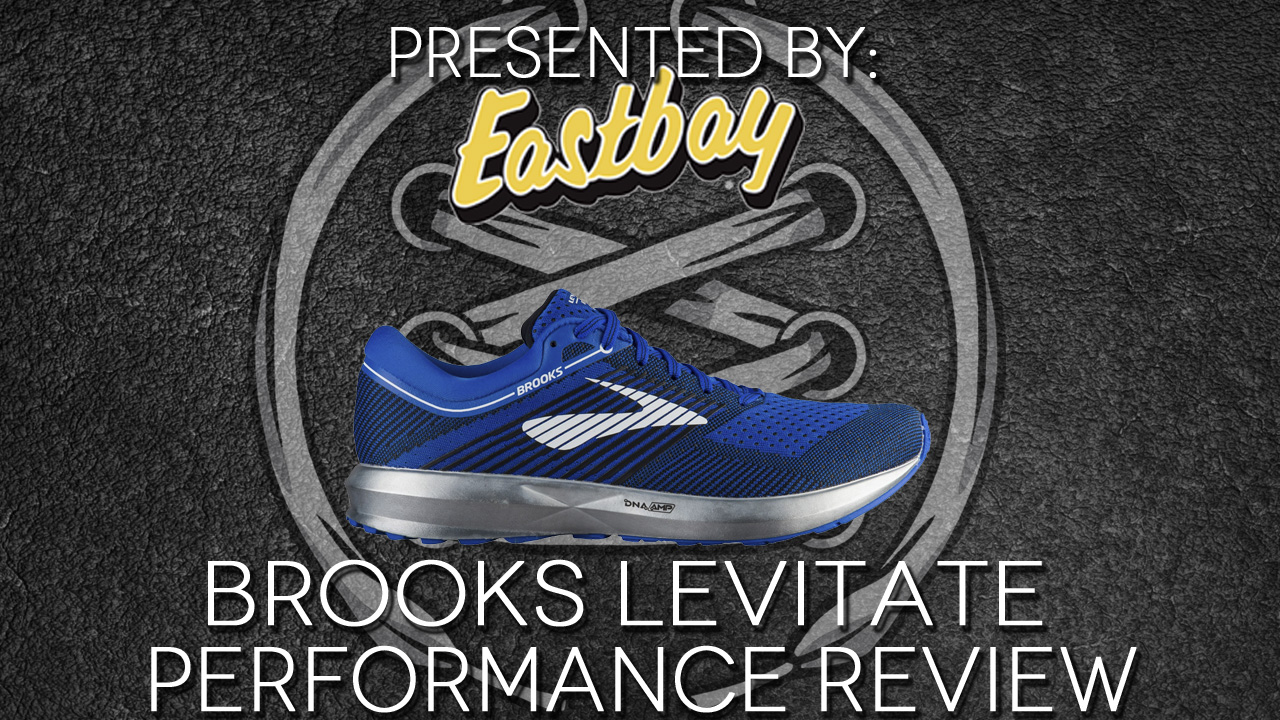 The Brooks Levitate is the most promising model that Brooks offers for today and tomorrow. With its mix of DNA AMP, Fit Knit, and elite-standard engineering, the Levitate also threatens the rest of the running competition.

It isn’t perfect (yet) but there’s room to grow in a way that doesn’t disembowel the model that currently exists for us. The Brooks Levitate is the physical embodiment of increased optimism from a shoe that gives back, but doesn’t give you more than you can handle. Let’s get into the review.

The Brooks Levitate is available now at Eastbay.com

Traction on the Brooks Levitate is good. It’s nothing revolutionary, but I will say this: because the Levitate’s sole is entirely segmented in the form of a chevron (which is a cross-section of the herringbone pattern), the traction actually helps to create better forward motion. Unfortunately, said design keeps the Levitate from being a more versatile gym shoe; it lacks even the most requisite support for lateral movement, and runners who strength-train before and/or after runs will need to switch out into other shoes.

This is not a traction issue, per se, but the design of the Levitate’s traction surface definitely contributes to the questionably multidimensional (non-) use of the silo outside of running.

The cushion in the Levitate has…nuance. Allow me to explain.

DNA AMP has kind of restrained pop. The giveback is palpable and bouncy, and it reforms to its shape very well. This is good, but it actually may be better in shock absorption. It has a restrained softness that breaks in further upon subsequent wears, even as it makes good on its high-performing energy return.

I think DNA AMP actually has more potential if Brooks and BASF can tune DNA AMP into gradations of firmness and softness. For my feet and my body at-large (5’10”, about 240 lb) I need a cushioning that trends firmer at the forefoot, under the met heads of my feet. I have very hard pressure point under the balls of my feet and my major phalangeal joints. With DNA AMP, the cushioning was just a tad too soft than what I’d prefer, which exacerbated a chronic turf toe issue I’ve been dealing with for a year. However, the cushioning didn’t hurt me further, and through the midfoot and rearfoot, DNA AMP was perfect.

I’d like to see Brooks and BASF develop a dual DNA AMP foam — one that trends firmer and one that trends softer, allowing for certain models to have have mix-and-matched cushioning setups that work with more runners; if Brooks allowed customers to design specific models with cushioning specifically customized for their needs, it would be a major success. Another remedy for those who might want a firmer bounce from DNA AMP is for there to be a thicker TPU plate sandwiched between the foam and the strobel; this would’ve been divine for me. As it stands, I’d really like a firmer DNA AMP midsole.

If DNA AMP were a tad firmer for my 240 lb bodybuilder’s frame, I might have fallen in love. Instead, I’ve fallen in like. (And yes, you can fall in like.)

The materials in the Brooks Levitate are top-notch. Fit Knit is an excellent competitor in the fabric knit market of athletic footwear. What I love about Fit Knit in the shoe is that it’s fabricated tightly, but has a stretch that conforms to the feet. I also appreciate that Brooks knew well enough not to add extra weight, so the company heat-applied its logo to the Fit Knit in strands, following the pattern of the Fit Knit itself.

The knit is actually a hybrid of Fit Knit and engineered mesh, or what I’ve been calling “engineered Fit Knit mesh.” The toe and quarter panels are engineered mesh and the rest of the shoe’s upper is Fit Knit proper. It’s a fascinating advancement in technology for Brooks, but something that the company has barely noted.

DNA AMP is particularly great in the way that it’s molded and protected by its TPU covering. It gives a sheen and shine that allows the shoe to maintain a brand new look, even when it isn’t. The foam is dense, but it isn’t heavy, and it’s soft, but not delicate. It’s a very solid system that maintains build integrity in its full-length shapely slab.

The inner materials of the Levitate are just as wonderful, and may be the best part of the model.

The fit of the Levitate is very strong because Brooks makes the best fit collars in the business; the lining is often seamless, sateen, and smooth that I often find myself staring at it more than anything else in a Brooks shoe. The Levitate’s collars are molded and stuffed, but also contoured to hug comfortably around the malleolus and the Achilles. The heel cups are generous, but not too generous.

Fit Knit helps a ton in the fit department as well. Because it’s soft fabric literally knit together, it conforms to the feet; however, that said fabric has stretch properties that allows for some give, but your feet aren’t just going all over the place — largely because of the footbed.

The footbed of the Brooks Levitate is well put-together, and is helped by the fact that the DNA AMP midsole is a big hunk of foam, all one piece. That continuity improves foot placement and discourages displacement of the foot from the shoe, which is super key in performance.

That said, I did experience some fidgeting in the midfoot-forefoot regions and I believe that Brooks could’ve raised a portion of the DNA AMP sole to creep up on the Fit Knit upper to create a kind of cupsole that would keep wearers stuck on the footbed. My feet were never displaced, but I didn’t have the security that all other Brooks models achieve with great success.

Another DNA AMP goody? The foam molds to your feet, in a way that’s reminiscent of the Air Jordan 5, from heat generation in the shoe. In the same way, the Brooks Levitate uses heat and pressure from your wear of the shoe to mold to your gait and foot shape, and I appreciate that this break-in is required because it creates your own custom shoe.

Support in the Levitate is multifold, and a little complicated, but ultimately yields a positive result. The aforementioned Fit Knit shapes around your feet and keeps a temperate climate for your feet to perform in. However, the lack of support on both the lateral and medial sides of the Brooks Levitate where your feet and the sole make contact can jar the security you might otherwise feel in the rest of Brooks’ offerings. Because the DNA AMP sole is thick and uniform, support underfoot is strong even though the medial and lateral support leave something to be desired.

Support is good. It isn’t what it could be, but expect improvement in the later iterations of the Levitate series (and there will be more).

Altogether, the Brooks Levitate is a beast, specifically for people who love soft cushion with balanced support. It’s a great easyrider for runners who need something that will give their bodies a break from more orthodox training pounding.

And let’s address the industry elephant in the room: because of Brooks’ BASF relationship — and with adidas paying for the license to use BASF’s innovative Infinergy as Boost — the comparisons have already been made since the announcement of DNA AMP. As one of the first people in footwear media to have access to the original Boost shoe from adidas — the Energy Boost — and the popular Ultra Boost silo, I can speak from personal experience in the comparison between the Brooks and adidas technologies.

The reason I have said that DNA AMP is restrained in its energy return and bounce is because Boost is not. Boost is almost pure energy absorption and energy return, with few material restraints. DNA AMP is firmer and feels like it fights to return all the energy that could be delivered; in addition, the TPU covering that houses DNA AMP in the Brooks Levitate acts as an additional buffer for the stress that your feet and legs can receive from impact and rebound.

In-house, DNA AMP has a leg up on the industry-awarded DNA and several steps up on Super DNA, which trends on softness that is much too feathery for my preferences. I do believe a multi-tiered DNA AMP cushioning setup would allow for more variation and excellence, but on the whole, DNA AMP achieves a high level of cushion and support without going too far in either direction. I’m almost positive that the tech will be tuned further, and I have high hopes for its durability.

Whether you’re familiar with Brooks or you’re a newcomer to its products, the Levitate is unlike anything you’ve probably ever worn — and that’s a good thing. 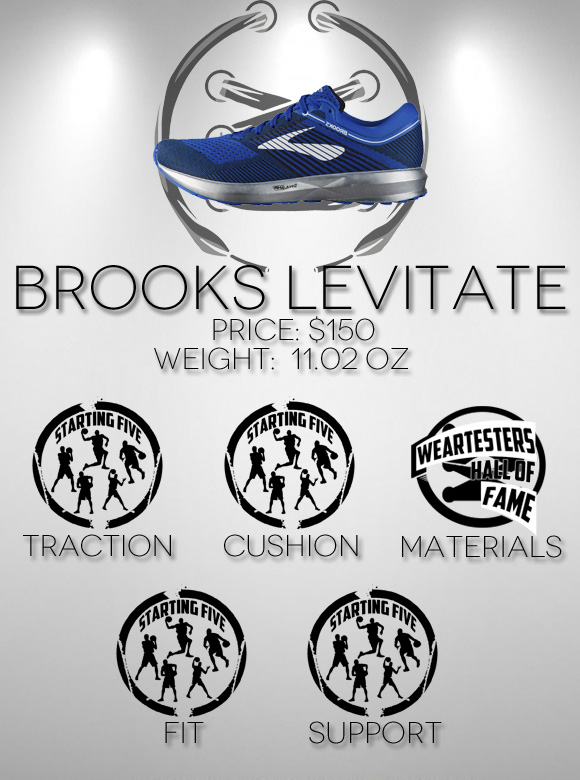 You can find the Levitate at Eastbay.