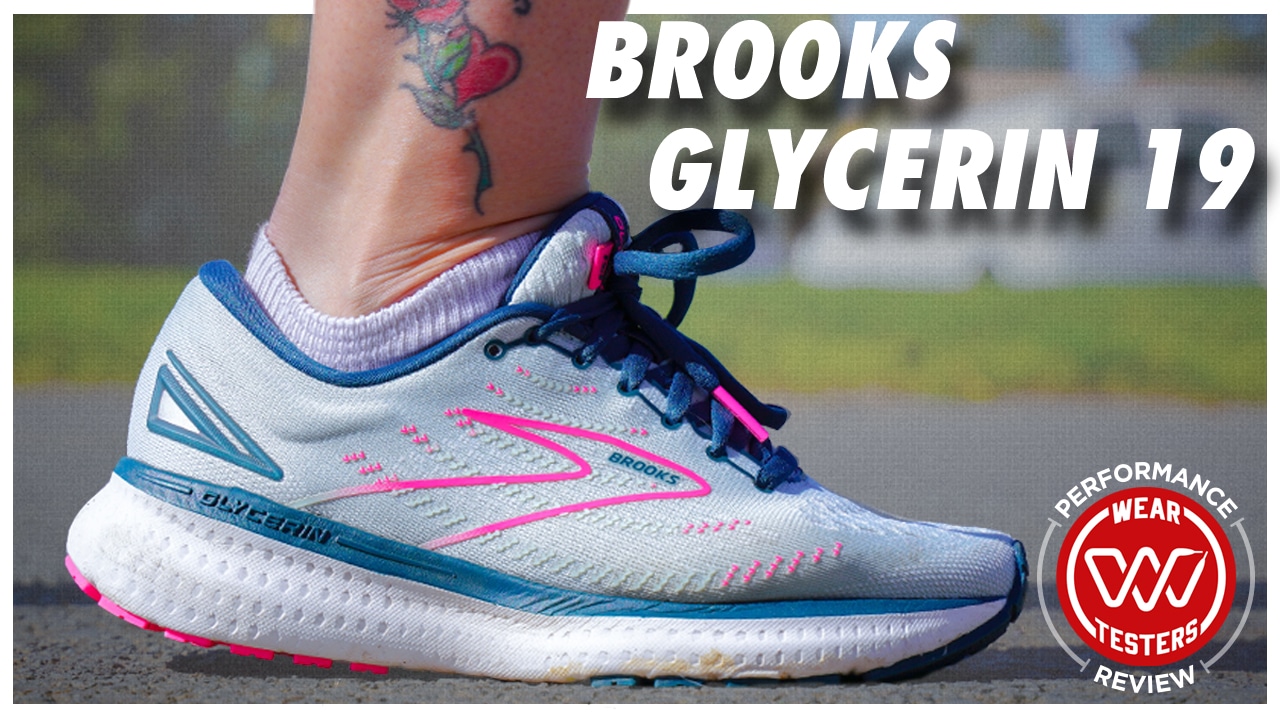 Overall, not much has changed. The weight (10.2 oz in Men’s and 9.0 oz in Women’s) and drop (10mm) are the same. The Glycerin 18 checked a lot of important boxes last year. Can the Glycerin 19 do the same with minimal tweaks? Let’s find out.

Drew: Full length DNA Loft, which is a super soft EVA blend, returns and feels great. It’s the most plush shoe in the Brooks lineup. And I’ve got to mention how durable the midsole is. I put a TON of miles (200+) on my Glycerin 18s and the midsole is still good to go. With the Glycerin 19 featuring the same midsole, this shoe will last a long time.

Jodi: I’m not going to lie, the DNA Loft cushion system did not wow or amaze me upon first try on. It felt very meh underfoot. I did my first run and I still wasn’t really won over by it. But I guess that’s the thing. When we live in a world full of Boost, Lightstrike, React, etc…everything else begins to seem very basic. Then one day, I realized that the Glycerin 19 was becoming the shoe I grabbed for first in my pile of runners. And not just because I had to get the testing done. The cushion set up is light and responsive and left my legs feeling great run after run. Sometimes basic is exactly what we need.

Drew: Brooks slightly tweaked the traction pattern from the Glycerin 18. The Glycerin 19 traction pattern has more and better flex grooves in the forefoot resulting in a more pliable front end. The rubber used feels similar to last year but is built with a more nub-like pattern. Just like last year, it’s not super grippy but gets the job done without slippage.

Jodi: The Brooks Glycerin 19 has traction for DAYS. It’s everywhere, nice and thick, but with plenty of breaks in it to keep the shoe flexible. I was able to take these out on the streets and trails, rain or shine, and felt secure the entire time.

Drew: The Brooks Glycerin 19 fits true to size and works for both narrow and wide footers. When people are just getting into running I often suggest starting with Brooks. The lasts (shoe shapes) they use work for the majority of new runners. New runners typically aren’t used to the foot swell that happens throughout runs. Brooks makes sure your foot has plenty of room to swell without feeling constricted. If you’re currently running in Nike and the upper feels too tight and uncomfortable later in runs, switch to Brooks and thank me later.

Jodi: Brooks does it again. My wide feet were super happy with my usual half size up. I know they don’t want to share their tricks of the trade, but I really wish other brands could get a hold of the last they use.

Drew: The midsole flares out all around the foot to provide a wider, stable base. Then, your heels sit inside the midsole and get locked down into a beefy heel counter when the shoe is laced up. I never felt in danger of sliding off the footbed on even the tightest of turns. You won’t confuse the Glycerin 19 for a trail shoe, but it’ll handle any uneven road conditions without issue.

Jodi: This shoe has me locked into place between the molded heel counter in the back and a nice wide base underfoot. Plus the insole is nice! It cups up the arch and helps give the shoe a bit of structure.

Drew: The Glycerin 19’s upper is slightly updated from the Glycerin 18. The upper is still engineered mesh with a three-fourths internal bootie and it’s just as comfy. The weird, hollow feeling laces also return and continue to never come untied. I can’t knock any of the materials used as comfort reigns supreme. I bet Brooks sells a lot of these just because of how good they feel on foot.

Jodi: The upper is dual-layered and super breathable. The 3D fit print allows plenty of stretch on top of the toe box area, but also has zero stretch along the sides so you’re contained. My feet never felt suffocated. And they managed to do it without the upper feeling crispy. This is a combination I love.

Drew: The Brooks Glycerin 19 is a slight update from the Glycerin 18 and continues to deliver max cushioning and comfort. At $150, it’s at the top end of the Brooks line and the most expensive daily trainer. Only the Brooks Hyperion Tempo and Brooks Hyperion Elite 2 match or surpass that price point.

Jodi: The Brooks Glycerin 19 is a solid performer. I realized while checking out the price ($150) on Brooks’ website that they had a mini sales pitch. “Super-soft cushion lets you run for miles without ever thinking about your feet — allowing you to reach a state we call Runfulness.” They did in fact manage to achieve that. I will be keeping these in my go to pile for many more miles. Who doesn’t want to reach a state of Runfulness consistently?

How to Buy the Brooks Glycerin 19

The Brooks Glycerin 19 is currently available at Dick’s Sporting Goods.

Thanks to Brooks for sending a pair to test. Brooks was not given any editorial control of the review. This review is based on our weartesters’ experiences using the shoes for speed workouts, trail runs, treadmill training, long runs, casual wear, and more.