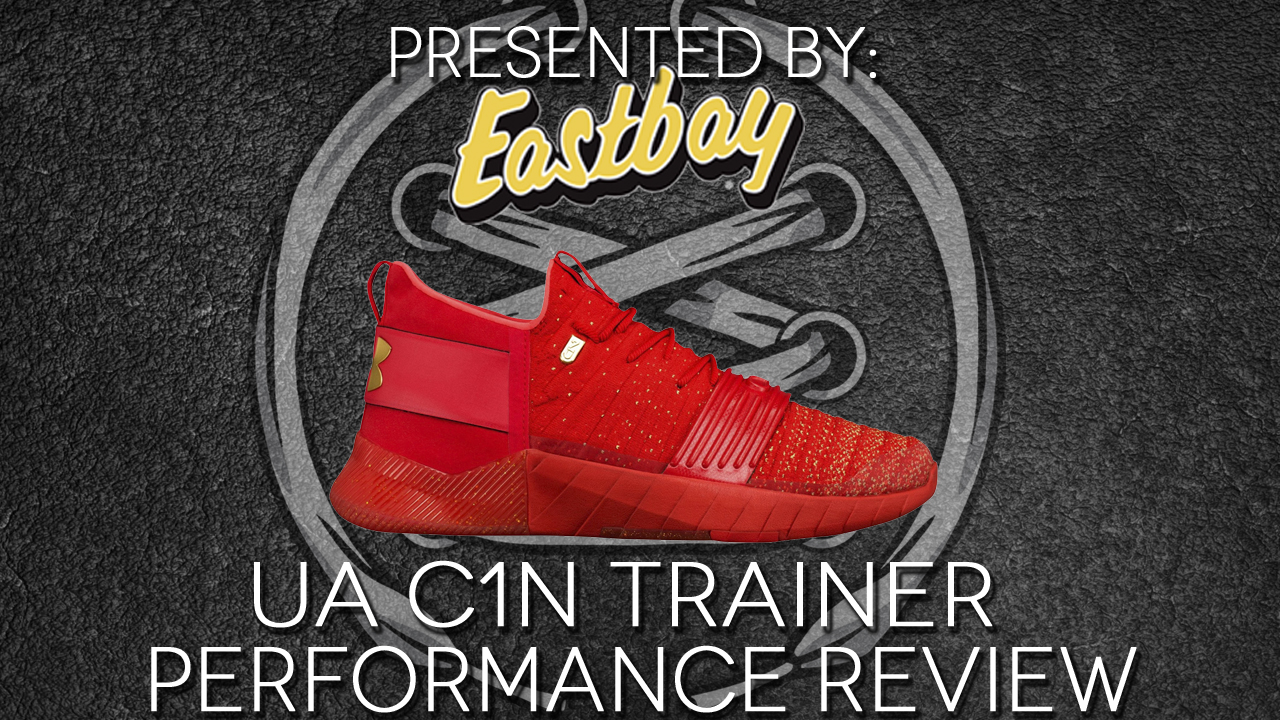 Well, this is different. For those of you who are fairly new, or didn’t really rock with Under Armour four years ago, Cam Newton had a signature shoe called the Cam Newton Highlight Trainer (Nightwing reviewed them here and I reviewed them for another site).

The shoe was pure athleticism — an almost barefoot concept mid- and outsole, Micro G cushioning, Highlight and low cut. The Cam was great for almost every exercise, even short distances on the track or treadmill.

It’s 2017, and Cam has stayed with Under Armour, and the brand knows football and training. But to be honest, these C1N trainers look way more lifestyle than weight room. So, knowing us, you know what comes next. Let’s go… 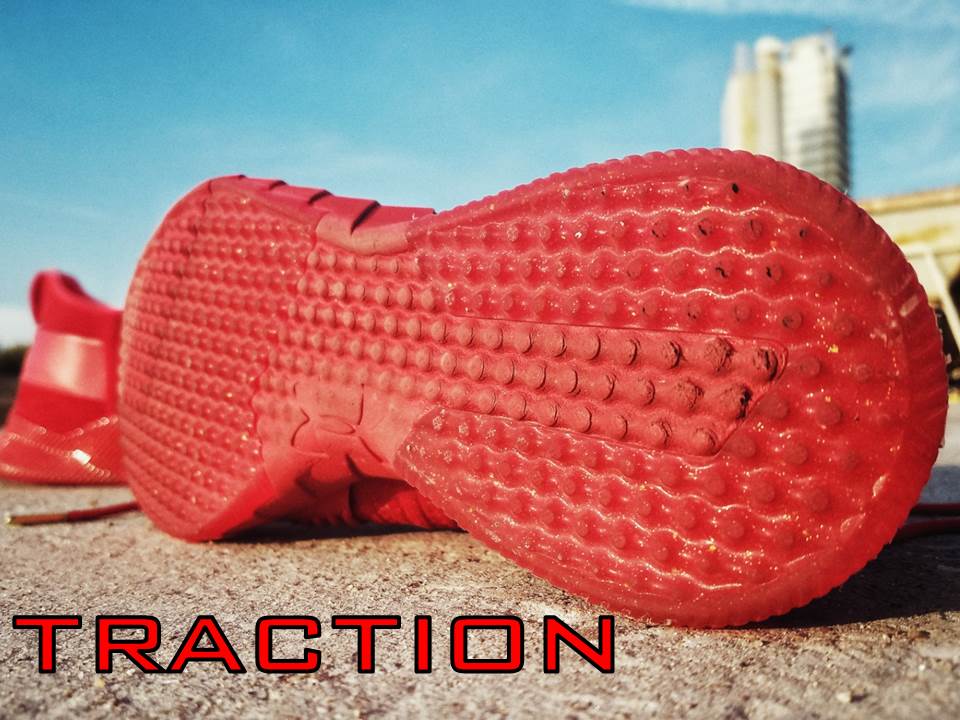 For traction, Under Armour went with a tried-and-true turf dimple pattern. First used on the Barry Sanders football series back in the ’90s, this pattern grips indoor turf and carpet very well while still being comfortable on hard surfaces (no click-clack from cleats).

Thick grass, or even wet grass, will give the nubs some issues because they aren’t meant for digging deep. If your area is dirt, such as a baseball infield, or an indoor practice facility, you will get great traction.

Lateral movements on smooth surfaces were a little tricky as there is no coverage side-to-side. I did try to play basketball in these, and for warming up or slow drills, they are doable. Once the full-court run got going, it was time to change. However, for what they were meant for — weight rooms and agility drills — the pattern did work great.

One thing to note: the outsole is made of two different materials. The translucent red areas running from under the big toe to the midfoot and the outer areas of the heel are a harder rubber and show some wear of the nubs. The areas under the other four piggies and the arch back into the middle of the heel is midsole foam. You can see in the picture above that those nubs are tearing off like a prom dress. There is still plenty of nub left, but just know what you are getting. 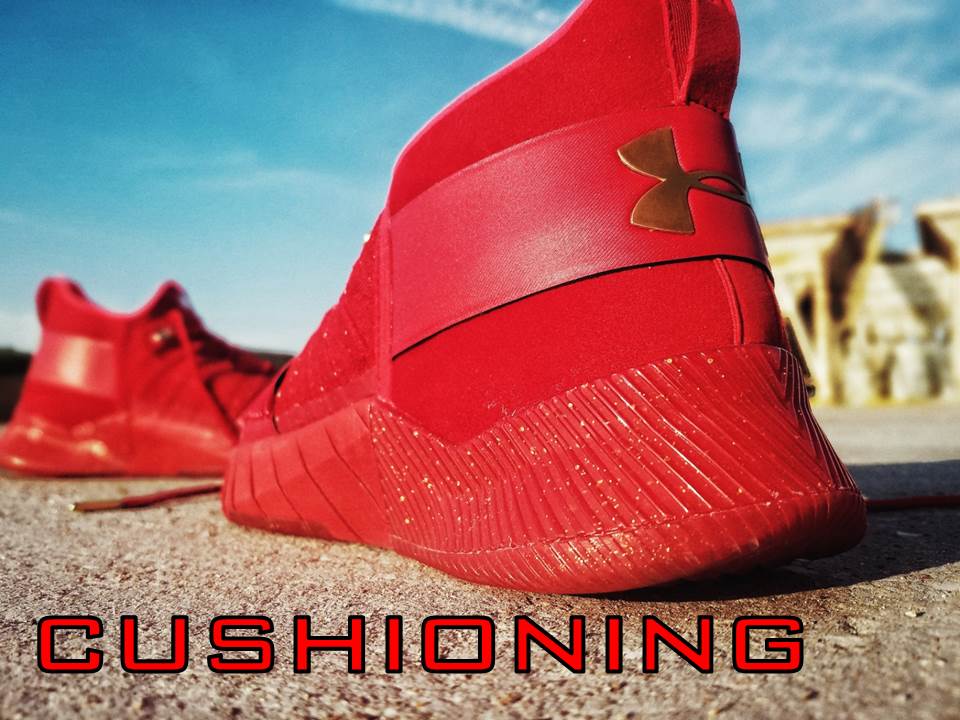 Micro G is back!! Well, at least in name. According to Under Armour, there is full-length Micro G in the midsole. It isn’t the bouncy, responsive Micro G that was in the Black Ice and the first Clutchfit Drive or the runners like the Mantis.

This Micro G is more contained, especially in the heel, where it is caged by the plastic midsole. By caging the foam, the heel becomes more stable, which is extremely helpful when lifting heavy weights. This is a tough line to walk for trainers; too much cushion and the shoe becomes unstable, too little and the activities are limited. Again, the C1N feels more weight room than basketball.

The forefoot, however, is close to the bounce we remember. Close, but not quite. There is some give and response as the midsole sinks and pops back, but the extreme spring in the Micro G step is still missing. If you notice, there is no cage on the forefoot, so the foam has more room to compress.

So, if the cushioning isn’t the Micro G we remember, how did it get a high rating? (dang, ruined that surprise). Simple: the cushioning does what is is supposed to, for a training shoe. It is stable in the heel to prevent ankle rolls or wobbles under the squat bar while at the same time able to absorb impact in the forefoot from landings. Remember, just because a shoe has mushy midsoles and bouncy cushioning doesn’t mean it is good if that isn’t what you need in that shoe. 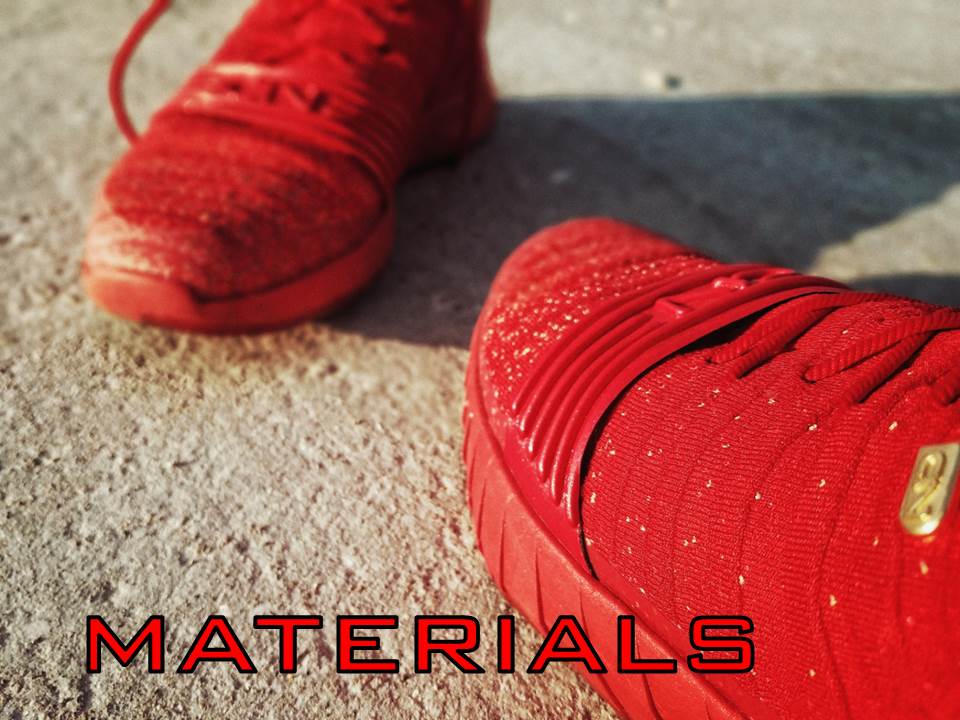 Under Armour revealed Threadborne on the Curry 3 but didn’t truly explore the possibilities until the Slingflex last winter. Threadbrone is a flexible woven material that can be stretchy or supportive, depending on the design and function. In the C1N, the forefoot and midfoot Threadbrone has a slight stretch and feels solid. The shoe isn’t stiff because the forefoot flexes along the toes and ball of the foot with no issues or hotspots.

This is good for containment on lateral movements while still letting the shoe fold and move with every step. Probably the best part is the ability to weave in interesting colors into the toebox. We have seen this colorway, the Panthers colorway with black sewn in, and the new ‘442’ with gold woven in. Solid colored shoes are ok, but for me, the excitement level rises when color is added.

The heel is synthetic suede that isn’t exactly premium to the touch but for the purpose of breaking up the look it works. It’s a very close cut, and honestly feels more like velvet, but it’s stiff enough to add some support around the heel by working with the synthetic strap around the back of the shoe. 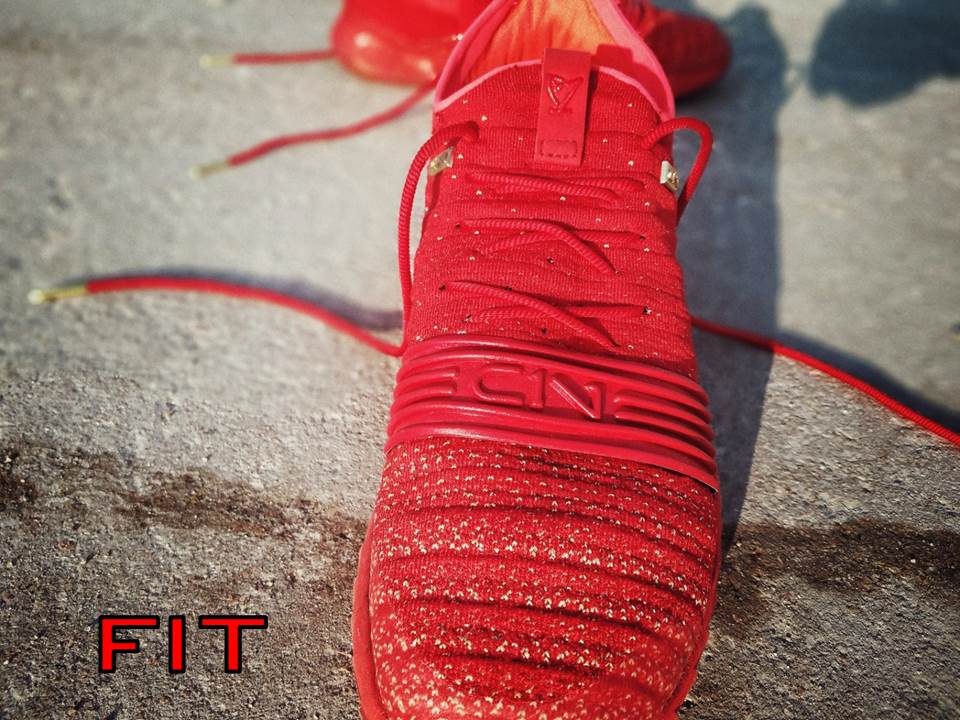 One piece uppers can have a serious problem: when you lace tight enough to stop movement in the shoe you can create some crazy wrinkles in the lace area. To get the C1N tight enough to stop most of my internal movement, the area under the laces folded under and pushed straight into the top of my foot. Blisters were not my friend, but they came hanging around.

Thus, I loosened the laces to allow the upper to expand and then I could take it off without untying. Neither way worked, unfortunately. If you can take your pick of those choices, you will get a forefoot that fits right on top of your toes with little dead space around the toebox.

The Under Armour site says to go down a half size, but length-wise the C1N fit perfect for me. The woven upper may allow most to go down half, making the midfoot fit tighter naturally and stopping the need to lace so tight, but I can’t say for sure since I didn’t try it.

One thing that for sure would have helped is more padding in the internal heel. It is not sculpted and instead goes straight up and down inside the shoe. Add a little more padding around the Achilles area to help with the heel lockdown and fit would have been much improved. 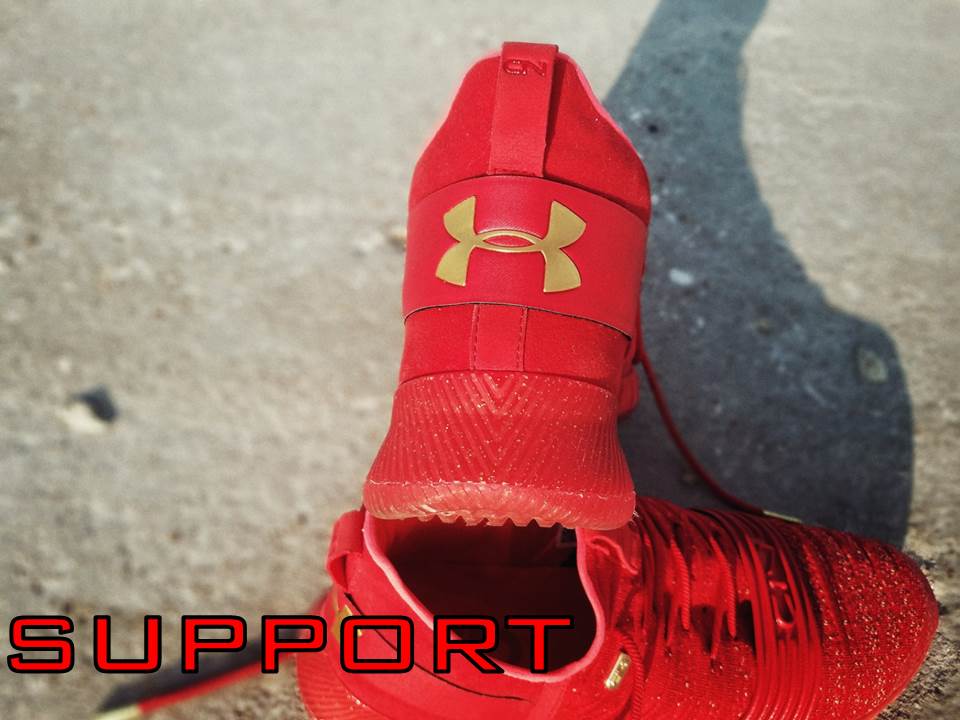 Most of the time, a sloppy fit leads to terrible support. How can a shoe be stable and supportive if your foot is moving around inside like it needs an escape? That is especially true for shoes used for speed, jumps, and cuts — dynamic movements.

With a trainer, fit still leads to support, but you can get away with a little more room and movement in the weight room. The C1N Trainer’s heel area, at least underfoot, is wide and stable, and if you are doing stationary movements heel slip is not an issue. When under the leg press and hack squat machines, I could feel my foot moving back and forth against the end of the shoe — not a good feeling when moving several plates around (plates are 45 pound weights).

The forefoot and midfoot, again, underfoot, are stable and solid. The cushioning never feels like it is bottoming out or tilting in any way, which gave a sense of security, even if the fit didn’t. The forefoot strap should have helped, but it is too narrow and placed too far forward on the upper to hold much. 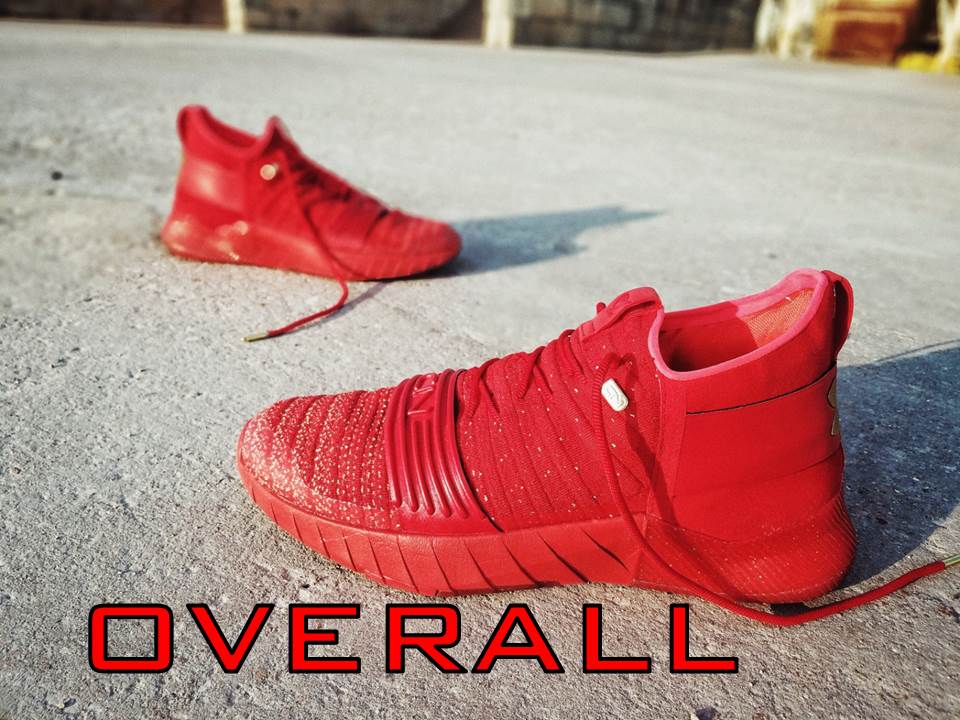 So, so close. The C1N Trainer is a serviceable trainer if you just need to get a quick workout in and head home. If your goal is to stay in the gym and run, lift, hit some plyometrics, box jumps, maybe a little basketball, then you may want to look for a shoe that fits a little better and contains a little more.

The Threadborne upper shows how versatile the material has become — the upper here is both multicolored and reflective — and the appearance of Micro G gives me hope that the foam isn’t completely dead. If the upper was more contained, cutting off the “going overboard” I felt on the sides of the shoes, the C1N could have been a classic. 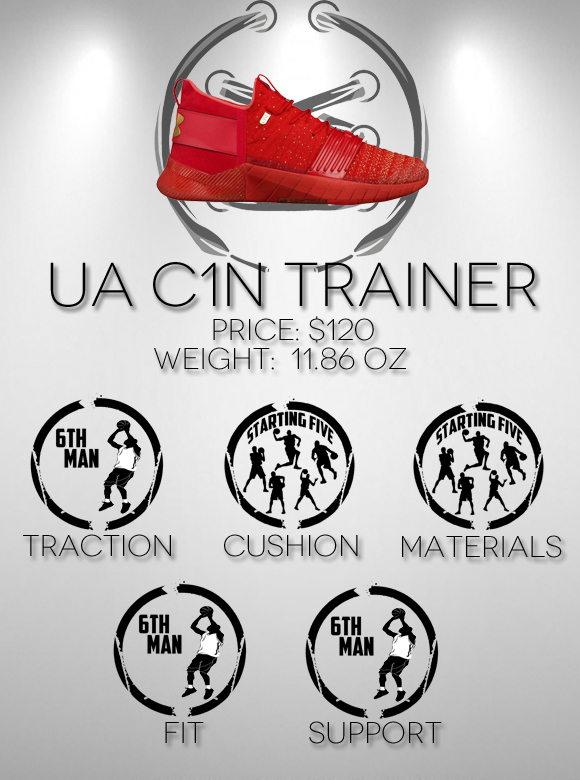